The story of Jeeps in Brasil (also called Jipes in Portuguese) is an unusual one, including a unique version of the CJ-5. Various histories of Willys Overland do Brasil contain slightly different timelines for the development of Jeep production in the country, so some of the dates below are approximate. 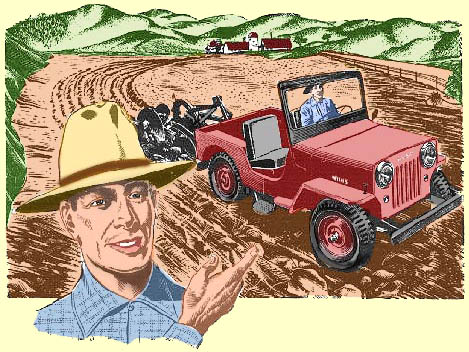 Early advertising emphasized the industrial and agricultural uses of the Jeep. This early ad for the CJ-3B (60K GIF) had a drawing of a farmer pointing to a Jeep with a plow, saying Devo minha prosperidade a éste companheiro ("I owe my prosperity to this friend.") I colorized the drawing for a CJ3B.info cover page in 2003. 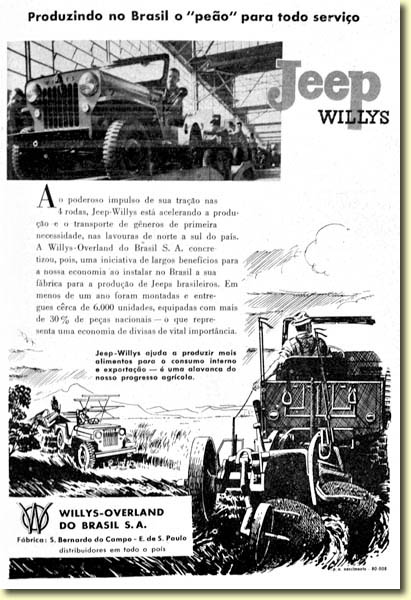 This ad, circa 1954, is headlined "Producing in Brasil the 'pawn' for all services: Jeep Willys."

The text states, "Willys-Overland do Brasil S.A. carried out an initiative of great benefit for our economy by installing in Brasil its factory for the production of Brasilian Jeeps. In less than a year, about 6,000 units were assembled and delivered, equipped with more than 30% domestic parts."

An ad with a drawing of a CJ-3B on a mountain road (40K GIF) was headlined Para terrenos acidentados... ("For rough terrain...") and called the Willys Jeep robusto, ágil et potente.

Despite Willys do Brasil advertising its contribution to the local economy, the importation of vehicles into Brasil was prohibited in 1954, not long after 3B's had begun arriving from Willys in the United States. 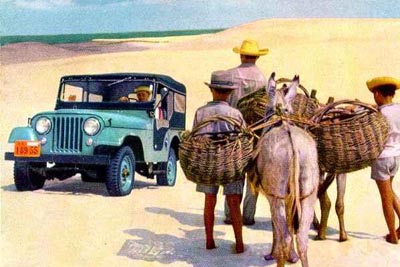 When Jeeps were again permitted to be imported from the U.S. in 1957, the CKD (complete, knocked down) vehicles which were assembled in Brasil were primarily CJ-5 models.

Willys do Brasil hand-tinted their own series of unique advertising photos. This one showing a CJ-5 on the Ceará Dunes in northeastern Brasil, is taken from the annual shareholders report of 1957-58. 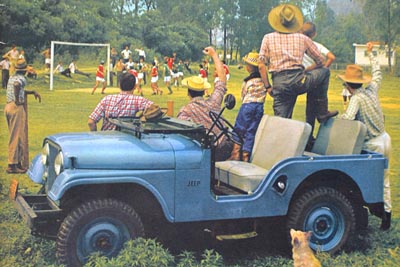 This 1961 ad for the CJ-5 Jeep Universal was headlined Faz parte da vida Brasileira ("It's part of Brazilian life.")

Business Week magazine reported in 1956 that Willys Overland do Brasil raised some of the capital to build their manufacturing facility by using a fifteen-Jeep caravan complete with music and movies, travelling through the countryside to attract small investors. ("Jeeps on parade help Willys finance its plant in Brazil", 27 Oct. 1956, p.158.) 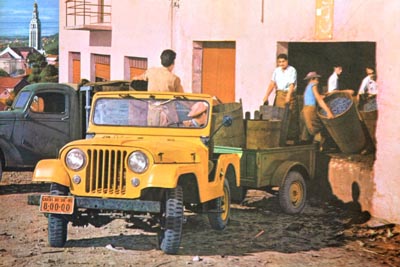 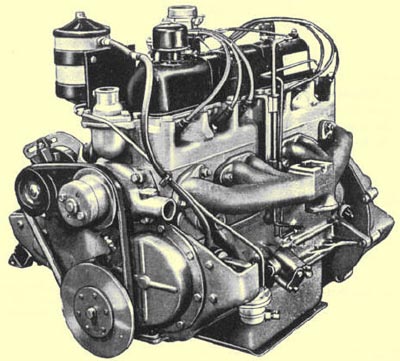 By 1960 the CJ-5s were being built from scratch in Brasil, and equipped with a Brazilian-made 2600cc (161 cubic inch) six-cylinder version of the Hurricane F-head engine. Known as the BF-161, it was rated at 90 horsepower. 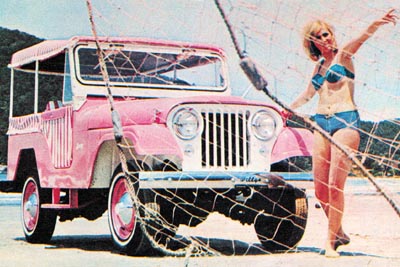 The reason for Willys do Brasil's concentration on the CJ-5 is a bit unclear, since most Willys-licensed overseas manufacturers in the 1950s were primarily making the CJ-3B. But the company liked to go its own way, and later modified the CJ-5 body to give it distinctive squared-off rear wheel openings.

They even built their own Praia ("Beach") Jeep. This pink two-wheel-drive CJ-5 inspired by the U.S.-built DJ-3A Surrey Gala, was similar to the 1961 CJ-3B "Beach Car" tried in Australia. 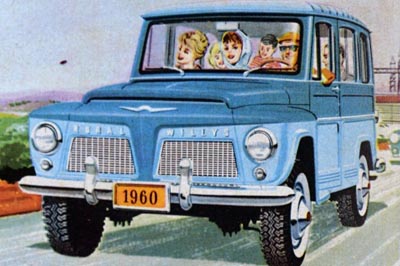 Another unique aspect of the story is the "Rural", a re-styled version of the Willys station wagon which debuted in 1960 in two-wheel and four-wheel drive. Initially it was labelled "Rural Willys" as seeen in this 1960 ad (180K JPEG). The new front-end styling was by Brooks Stevens. 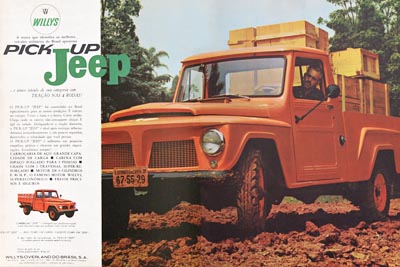 The new bodywork was also used on the pickup truck. See a 1967 advertisement (90K JPEG) for both of the utility vehicles. Production of the pickup continued into the Ford era (see below), during which it was called the "F-75". 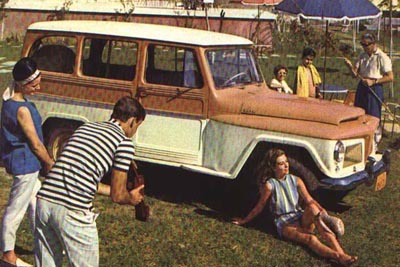 The Rural was produced by Willys, and later Ford, until 1977. Elsewhere on the web, see Rural Willys Brasil with more information in Portuguese.

Stevens did a prototype in 1960 for a Brazilian Jeepster with a similar nose, known as the "Saci", which didn't go into production. (See Jeep Designers at Work on CJ3B.info.) 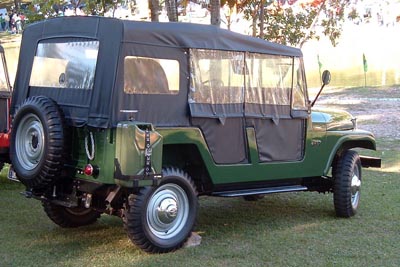 The need for a longer-wheelbase Jeep was met in 1962 with a Brazilian equivalent of the CJ-6, built on the Rural's 101-inch wheelbase. Called the "Jeep 101" and also known as the Bernardao or Jipão, it had the squared-off rear wheel openings and was available with two or four doors. Photo by Renzo Maia (under CC.) 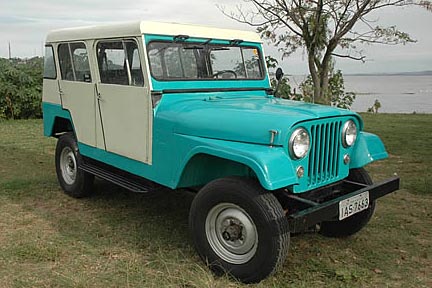 Aftermarket items aimed at Willys owners included the Carraço hardtops (120K JPEG) made in Brasil. The capota de aço ("steel hardtop") designed for the 101 came in both two and four-door models. This beautiful 1963 Jeep with Carraço top belongs to Carlos Pilz. 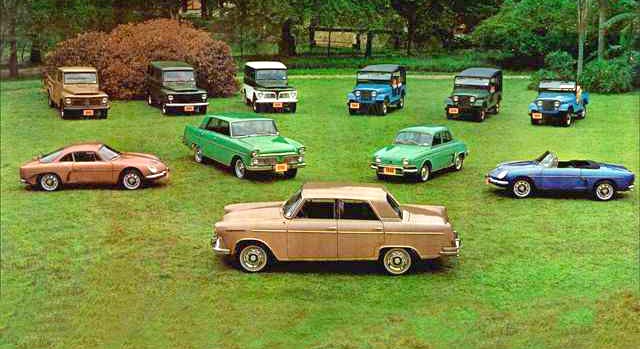 By 1966 Willys do Brasil had an extensive line of cars as well as the Jeeps. This advertising photo of the 1966 lineup includes the Aero Willys 2600, the sub-compact Renault Dauphine, and the Cabriolet and Berlinetta verions of the Willys Interlagos sports car. 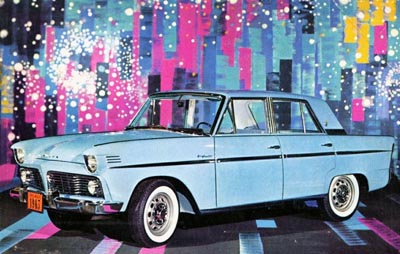 The Aero Willys car, built in the U.S. until 1954, had received a Brooks Stevens re-styling in Brasil in 1962 as the Aero Willys 2600, named for the 2600cc engine. It was launched at the 1962 Paris Motor Show, to give it more prestige than a domestic launch would generate. 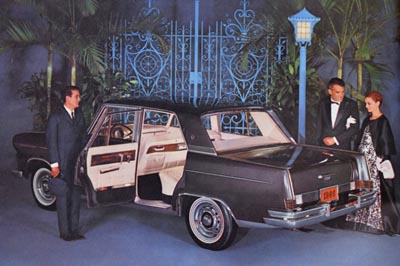 The Itamaraty, a luxury version of the Aero Willys, was launched in 1966 with the "3000" engine, bored out to 3 liters and producing 110 horsepower.

The Willys cars were continued by Ford until 1971, with the exception of the Executive limousine version of the Itamaraty. The Executive had again been conceived as a way of creating more prestige for the Itamaraty, but only 27 were sold before Ford dropped the limousine from its line. (See "A história da limousine Executivo" at Rural Willys Brasil.) 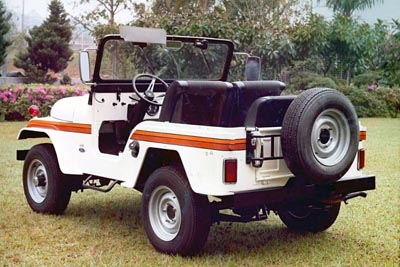 Ford do Brasil bought Willys in October 1967, and continued to produce the Rural, the Pick-up (as the F-75) and the CJ-5 with the squared wheelwells. They replaced only the name "Willys" with "Ford" on the side and rear of the body. 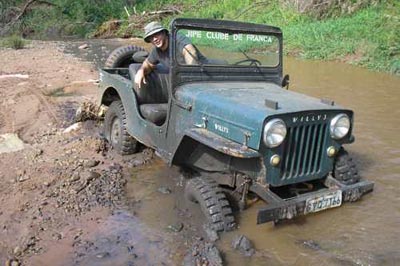 There are lots of Jeep clubs and organized off-road activities across Brasil. This photo is Marcelo Marchiodi's 1954 CJ-3B from the Jipe Clube de Franca, in the state of São Paulo. High hoods are widely known in Brasil as cara de cavalo ("horse face") Jeeps.

For more photos of extreme off-road activity in Brasil, see CJ-3Bs at the Mud Races on CJ3B.info. 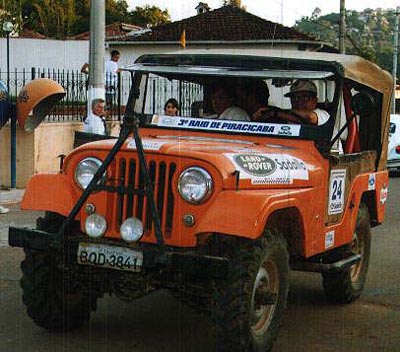 The CJ-5, known as the "Universal", is still the most common model in the country. This is a Ford CJ-5 belonging to Haroldo Prado. 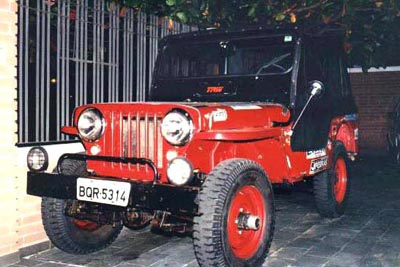 There are also older Jeeps on the roads, including CJ-3As. Newton Cesar calls his CJ-3A in this photo "Pomarola", after a brand of tomato sauce.

After World War II, the U.S. sent a number of surplus MB's and GPW's to Brasil under a military agreement, followed later by M38's and M606s. Many of these are now in civilian hands -- see a Kaiser M606 in Brasil. 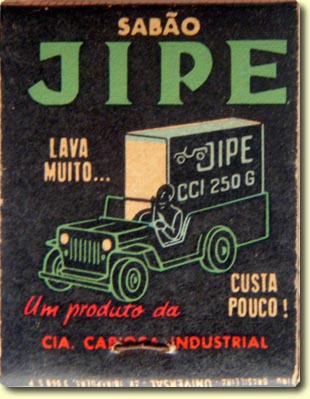 Brasil's distinctive Jeeps were clearly a source of some national pride, and apparently Willys do Brasil had not copyrighted the term Jipe. The name was adopted for a soap, advertised on this matchbook: "washes a lot... costs little!"

Also on CJ3B.info, see the Willys Interlagos sports car built by Willys of Brasil from 1962-66.

Elsewhere on the web, see O Jeep CJ-5 no Brasil in Portuguese.