The most common Jeep in Brazil is the CJ-5, built locally in several variations from 1957-83. But there are quite a few CJ-3Bs, mostly early Willys models imported prior to 1954 when vehicle imports were prohibited. Sergio Maida Makowsky and his 3B have been fixtures on the Brazilian off-roading scene since 1988 when he bought his "Jipe." Sergio's English is pretty good so I'll let him tell the story: 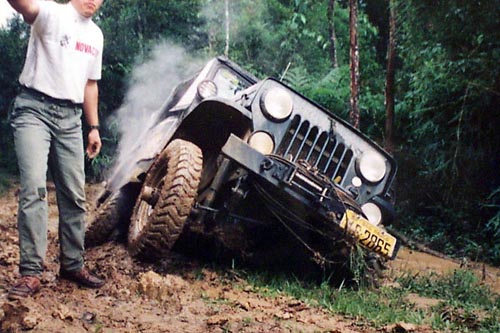 "I bought this Jeep in 1988 in bad shape, and rebuilt it imagining I would use it only to drive in the city, but as soon as I finished I started going to meetings of the Jipe Clube do Brasil, which stimulated me to follow them on off-road rides. Then in a short time I became vice president of the club, and during three years I drove practically every weekend on small unpaved roads around São Paulo, Minas Gerais, and Rio de Janeiro states, planning routes to use in the events supported by the club." 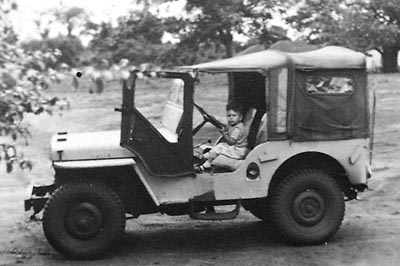 "I don't have much information about it before I bought it, but its history probably is not much different from most of the Jeeps in Brazil. This kind of vehicle was used in farms for 20 or 30 years. I am 54 years old now and my family had Jeeps all the time I was young. I have some photos taken in 1949 with me in a '48 CJ-2A. You can also see me, my sister and cousins (100K JPEG) on the hood of a '51 CJ-3A in a photo taken in December 1955. 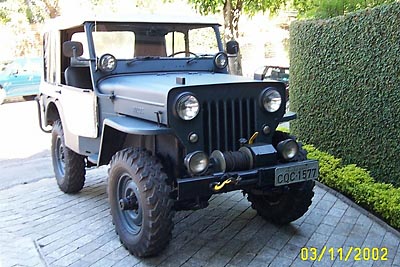 "My CJ-3B was restored entirely by me, with the exception of the gear box and the axles, in my home, including the painting job. The first time I did this was when I bought it in 1988 (light blue color), then in 1992 I repainted it in a dark blue color and finally redid the painting in 1999.

"The hood is a repro made here in São Paulo. The tooling used to make the hood is part of complete set that a guy who has a Jeep repair shop here bought about 18 years ago, from a little aftermarket factory in the south of Brazil which made these repair parts for probably 25 years. This set of tooling allows to make complete bodies for CJ-2A, CJ-3A and CJ-3B, besides some CJ-5 parts.

"The mechanical winch (80K JPEG) you can see in the photos is driven by a shaft connected to a power box (90K JPEG) coupled in the back of the gear box. Both are made in Brazil." 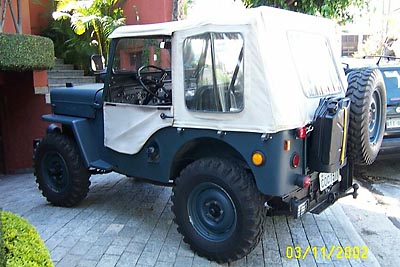 "In 1994 I decided to rebuild the Jeep again, and stop putting it to such hard off-road use. The use was restricted to driving to my local job which is 35 miles from home, and a week-long trip that I usually make each year to the mountains in the states near São Paulo. These trips are normally about 1500 miles long. 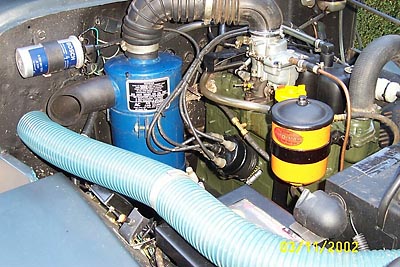 "The engine is a Hurricane with 12-volt alternator, Zenith carburetor and paper air filter. The air filter is the unit used in the last CJ-5 made here by Ford with the four-cylinder engine of 2300cc displacement (this engine also equipped the Brazilian Ford Maverick and was exported for the American Ford Mustang II). The same air filter is used in the Ford F1000 pickup and in the Mercedes Benz 608 small truck.The air hose is an arrangement to allow some inside air flow.

"I rebuilt the engine two times, first in 1988 and in 2001. Here in São Paulo it is easy to find parts for Jeeps in specialized shops." 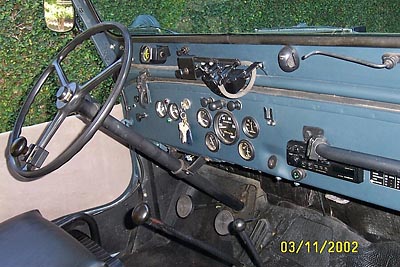 "The windshield wiper is a vacuum Trico unit used in a '48 Ford, which I installed using hardware I acquired in the local aftermarket. I have an original Jeep vacuum unit, but it is in bad condition. Maybe someday I will try to restore it." 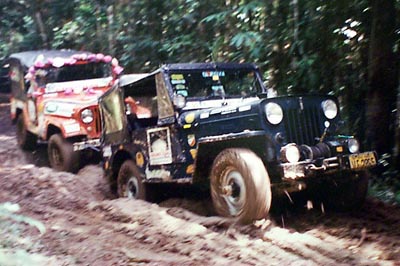 "The Jeep Clube events frequently had up to 120 vehicles participating, almost all CJ-5 Jeeps. In one of the photos you see a lot of Jeeps (100K JPEG) in a gas station during an interval of a Jeep club run in 1992." 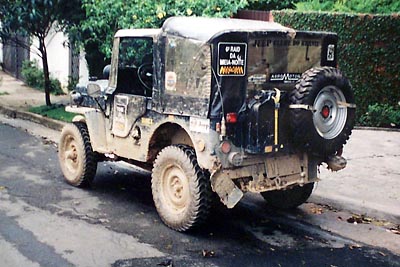 "This photo shows the condition of the Jeep, in returning from a weekend event. See also a front view photo (90K JPEG).

"Looking at these picture you can see the main reason I don't do this kind of driving anymore: compassion for my Jeep. Now I use it only for my vacation trips or some weekend drives. I have driven this Jeep in the past 14 years about 35,000 miles, mainly in unpaved roads."

Thanks to Sergio for the photos. -- Derek Redmond