How many Willys Jeeps, built in the 1940s and 50s, still serve as working vehicles? Well, I think the answer is: very few. A small number of working 3Bs have been featured here on CJ3B.info over the past 20 years, including only a handful on farms. But a 1960 CJ-3B still doing chores on a Michigan farm inspired artist Robert Perrish to paint its portrait, in this 2016 painting titled "Willys Jeep At Work". 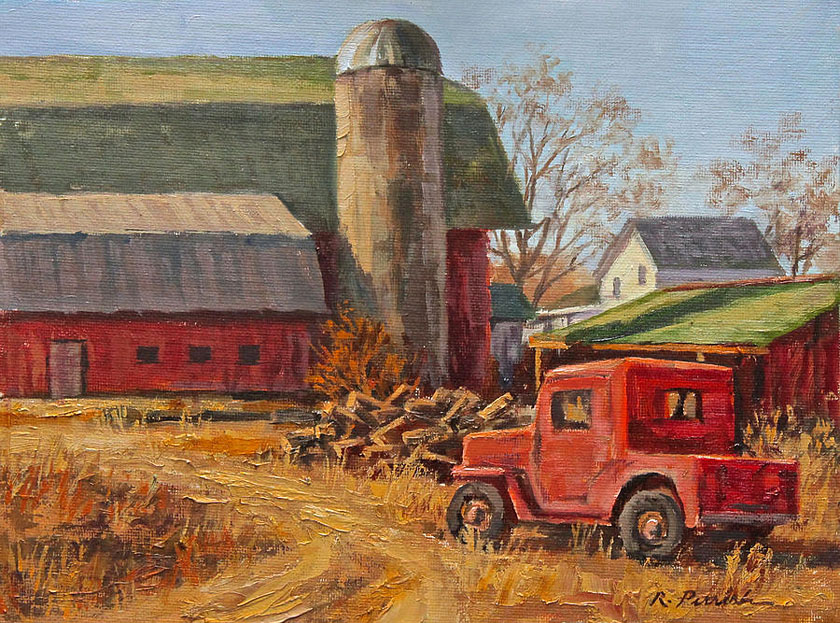 Robert Perrish is a lifelong resident of Michigan, whose work as a commercial and wildlife artist has evolved into also doing landscapes, portraits and still life. He likes painting outdoors, although that does present challenges such as weather, bugs, and limited hours of daylight. He says "This was done on location in early March in Michigan. The Willys Jeep is a 1960 one that looked so cool, I had to paint it."

"Willys Jeep At Work" is reproduced here courtesy of the artist. The original oil painting is 12x9 inches and is for sale for $400. Various types of prints are also available from Fine Art America.

In 2006, Reed Cary asked on the CJ-3B Bulletin Board whether anybody was using their Jeep to help with farming, and got a few replies.

Reed: "Indications are that most, if not all, of the agricultural and industrial attachments available for CJ-2As through the CJ-3Bs and CJ-5s are, for practical purposes, only collector's items.

"I own a small acreage. My CJ-3A has never seen its agricultural heritage. Should I even consider using it for what it was originally advertised for? Should I consider looking for farm implements to fit it, as well as the equipment used with it -- Monroe hydraulic lifts, 3-point hitches, etc.? Is any of this stuff still useful? Or is it all part of a collective antique remembrance game?

Karl Morton: "My '53 CJ-3B equipped with a Monroe 3-point lift does tractor duty every fall during the almond harvest. Almond harvesting consists of shaking the nuts from the trees, raking them into windrows, then picking up the windrows with a machine that separates the almonds from the foreign material. The almonds are discharged from this machine into carts which are shuttled from the 'pick-up' machine to a conveyer and ultimately loaded onto trucks. Up until a few years ago I had hired the pick-up machine so my tractor was available to perform the shuttling duties. At that time I bought my first pick-up machine, which was PTO-powered and therefore would have my tractor tied up. Rather than pay for a second tractor that would only be used a few times a year I decided to use the Jeep for this job. The only problem I have ever encountered was trying to stop 2500 pounds of almonds with 9" brakes. After a near death experience I have learned not to try to go too fast."

Chuck: "I live in the Shenandoah Valley in VA. The farms here are rather small by mid-west standards so folks here tend to get machinery related to the size of the farm. I personally know of three gentlemen who use their Jeeps in lieu of a tractor. These vehicles have all of the implements necessary to perform farm work with the added bonus of being able to run to town for something cold when the plowing is done. I could get into non-till-type farming or hydroponics and such, that shows that disc-harrowing and other related duties are no longer needed, but that is not the point. Your question is if the Jeep would be useful for such work. Yes!!!! The comfort level alone is well worth replacing that Deere or IH and the fact that you can use it for other duties as well. As much as some of the guys on the board spend on their units, it is worth the time investment to at least investigate. By the way, one fellow lets his Deere sit until harvest as he prefers his 2A. He says that it makes his heart tick a little easier."

Glenn Houston: "Yes I do use my Jeep for some of my farming. I pull a harrow and a small corrugator. I also use it to run a small spot sprayer. But I only have a small place with a few horses. Nothing like it was 50 years ago when we used a Jeep to cut, rake, and buck hay, pump water for the cows, cut wood, run a grinder, plant grain, herd cows, and dozens of other things. The 4-wheelers have taken over a lot of the jobs that Jeeps were used for, and in some cases they work better."

Ed Wilson: "I use my newly rebuilt 3B with the Koenig winch for getting firewood, along with the M416 trailer. It seems all the good firewood is below the road! But with the winch, I can actually pile the wood before I cut it. I find it is easier to rig some nylon straps and run the cable, than move a pile of wood to a loading point. I also love the trailer, as I can stand flat-footed on the ground and reach any point in the bed; tough to do with a pickup truck."

Andy Stock: "Here's another question: what else would you do with it? Some people have climate-controlled garages where they park their old cars and leave them sit. Once in a while they go out and rub them with a diaper. Others bolt them to a trailer and bring them to car shows, the engine never being turned. Some drive them in parades. I can't picture something as durable and as rugged as a Jeep being babied like an old Rolls Royce. Use it! The Jeep can handle it. In my experience cars always go to crap when they sit. Best to keep the old machinery running because someday they'll probably ban it."

Reed: "Thanks for the input! I don't quite how to express it. Dad had it, but we next generation seem to have missed it: some sort of bravado, some sort of fearlessness against physical experimentation, some sort of intuitive understanding of raw power. I seem to sense a need for renewal of the past. I don't know exactly what, but the term 'stalwart' comes to mind. I fear that we may need it, again, in the future.

"I still recall folks in the hinterland backing up the roads, because of the lower reverse gear, and hooking up their rear axle, when jacked up, to a pulley drive, to drive other equipment. Wide leather belts were the name of the game, providing power to all equipment, as one can see in some of the photos from that era. Watch out for your fingers, however, as you could easily be caught between belt and flywheel!

"Great to hear from you guys who still use the Jeep as intended and designed, and to find that it is still useful."

Thanks to Robert Perrish, and to the contributors on the CJ-3B Bulletin Board. -- Derek Redmond

Here are some more pages on CJ3B.info featuring working Jeeps:

Last updated 5 May 2017 by Derek Redmond redmond@cj3b.info
https://cj3b.info/Working.html
All content not credited and previously copyright, is copyright Derek Redmond