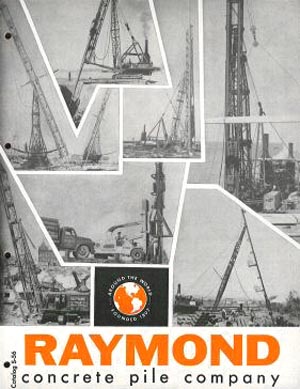 The Raymond Concrete Pile Company was founded in 1897, and became a huge corporation operating around the world. They had major roles in construction projects including the Golden Gate Bridge in 1932, and the Pentagon in 1941.

According to Building the Pentagon by Stanley Nance Allan, Raymond Concrete started work on the foundation sixty years to the day before the 11 September 2001 attack on the Pentagon. "They operated several drilling rigs, working around the clock, seven days a week, eventually driving 50,000 of their patented steel pile casings some 50 feet through the underlying clay. The constant rhythmic pounding of the jackhammers driving the mandrels inside the steel casings, created a lively pulsation and rhythm of continuous activity on the job-site."

Time magazine of 25 January 1954 reported that Raymond Co. had also headed the consortium that built most of the U.S. air bases in the Pacific during World War II. The 1956 catalogue at left shows some of their large piledriving equipment in operation. The company later evolved into the still-operating Raymond International.

The Gow Construction Co. of Boston, which became the Gow Division of Raymond Co. in the 1920's, had specialized since 1902 in driving small soil sample holes. According to Notes on the Standard Penetration Test, a Gow engineer named Harry Mohr developed a standard soil test method, described in his 1940 paper Exploration of Soil Conditions and Sampling Operations (Bulletin 269, Harvard Graduate School of Engineering). The number of blows per foot of penetration is recorded, using a 140-pound hammer dropping 30 inches onto a 2-inch outside diameter sample pipe.

A diagram (15K GIF) shows the procedure, which appears to be exactly what a Raymond crew in their matching uniforms is doing in this photo from a 1954 Willys ad in Fortune magazine.


The text in the ad reads:

In building anything big, the first step is soil sampling. Gow Division of the Raymond Concrete Pile Company, 57-year-old construction company with projects around the world, keeps its 28 'Jeeps' going eight hours a day in its work of investigating soil conditions to furnish information to architects and designers so they can determine the best type of foundations for construction projects of all kinds. Here is one of Raymond's 'Jeeps' with power take-off being used to operate an exploratory boring outfit.

The manager of Raymond's Gow Boring Division says: "We were the first to use the 'Jeep' in soil testing work, and we have been using more and more 'Jeeps' ever since. The 'Jeep' helps cut our costs by getting more done. It can maneuver over rough ground in the country and get into tight spots between buildings in the city. It furnishes the power for operating our rigs and carries our equipment quickly from job to job so that we're always ready to go." 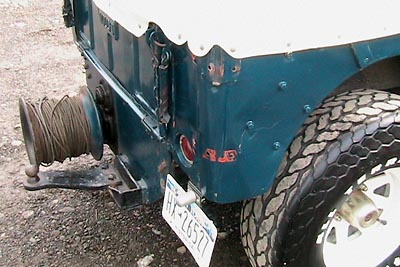 At least one of those 28 Raymond Co. Jeeps was until recently still in operating condition. Jay Baldo of Fly Creek NY purchased the 1953 CJ-3B in 2005, and recognized it from the Fortune magazine ad on CJ3B.info.

The capstan which was used for raising the 140-pound weight is mounted on a heavy plate that replaces the rear bumper. See also a large photo of the capstan (100K JPEG). The mechanism can be serviced through an access hole (100K JPEG) in the rear floor (70K JPEG). 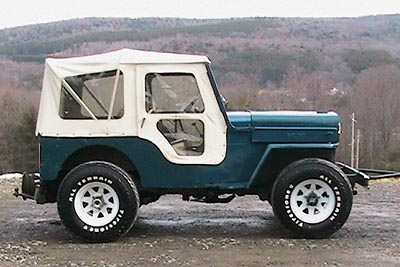 Jay commented, "The original color of the Jeep was green (see Woodstock Green in the 1953-54 Willys Paint Samples). I can still see a lot of the original paint on the firewall, etc. The black paint on the windshield frame is visible too in places. A previous owner made quite a few minor modifications to the Jeep. I would like to return it to its original condition, even down to the Raymond Co. stenciling on the hood. " 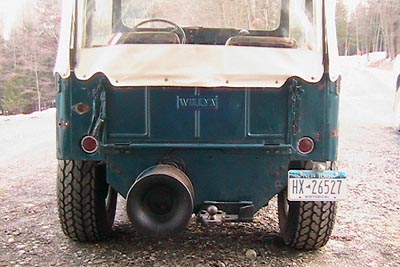 Jay mentioned, "I lay on the ground and examined the tailgate very closely and found (with just the right viewing angle) there also is lettering stenciled on the tailgate, but the wording is very difficult to make out. It does say 'Raymond Concrete Pile Co' near the bottom (above the capstan). I can also make out the word 'test' near the top left of the tailgate.

"Aside from painting the Jeep and replacing the original wheels with what you see, the previous owner also had the white canvas top made for the vehicle and added roll bars, fender flares, a rear tailgate rack, bucket seats and a backseat from a CJ-5. I have removed all of those items. Unfortunately this has left the body and fenders with quite a few holes. I pulled out the bucket seats and replaced them with reproductions from Beechwood Canvas in NJ. (That was expensive.)" 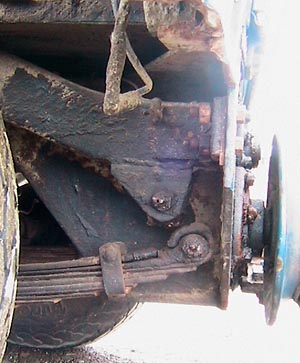 The massive structure supporting and enclosing the PTO winch appears to be an aftermarket installation, by an unidentified manufacturer. The serial number "GG 265" appears on a small tag on the dash (70K JPEG).

Jay adds, "The Jeep only has 18,000 original miles on it and everything is in mostly original condition with virtually no rust. The engine still runs on the 6-volt system, the horn still works, and even the wood damper for the spare tire is bolted to the side. Unfortunately the spare and its holder no longer exist." 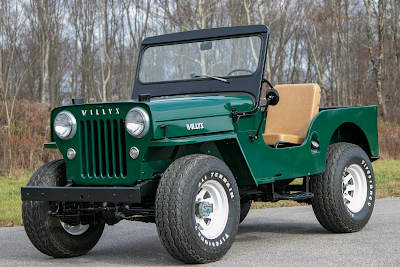 As of 2019, the Jeep was sold, and restored without the PTO winch. It was then bought by Matt Calderone (see 1953 Owners' Photos) who also bought the winch. 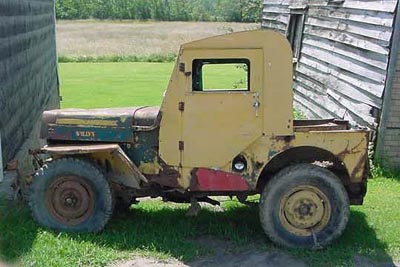 Chris Wilson has located what appears to be another Raymond Jeep. "I noticed that the rear of the Raymond Jeep looked very similar to the rear of the Jeep that I had just purchased. Sure enough as I looked closer I realized it was the same. Even though the cable spool is missing from mine, it is still quite obvious that it is one of the Piledriver Jeeps." 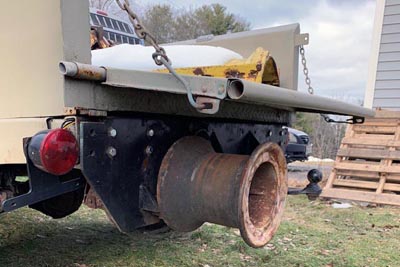 As of December 2019, Glenn Byron acquired a 1961 Willys pickup (280K JPEG) from Massachusetts which indicates CJ-3Bs were not the only Jeeps given the rear capstan winch by the Raymond shop. Thanks to Toni Gilbert for the photos.

The truck has a front PTO winch, and Glenn says, "The PTO is a single stick so the shafts both turn when engaged. I just keep the front Ramsey winch disengaged." He also comments, "You can easily see where a pickup could transport the pipes necessary for the core sampler outfit better than the bare Jeep."

It's interesting to speculate whether a Raymond crew at work in Arizona in 1946/47 may have been in a Jeep when they had the following experience:

Ralph Scheibly, John Perry and John Jones were reportedly working at dusk when they heard a loud explosion nearby and found a UFO crash site with three small beings outside the craft, one crawling away from the debris. According to an online "UFO Compendium" the witnesses and a live alien were taken away in separate vehicles to a building where the men were told they had witnessed a secret U.S. project, and not to talk about the incident.

Were the aliens trying to steal Harry Mohr's new soil sampling technology? We may never know...

Thanks to Jay for the photos, and Steve Chabot for scanning the ad. -- Derek Redmond

Also on CJ3B.info, see the complete 1954 Advertisement in Fortune.