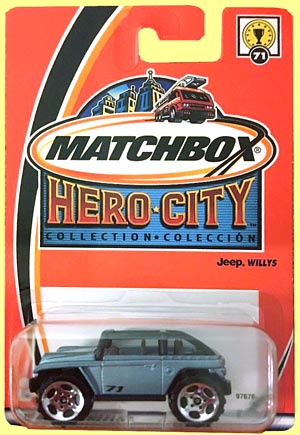 Matel's ill-fated "Hero City" experiment in updating the Matchbox image for 2003, gave us a surprising new Jeep model -- the "Jeep Willys" concept which had been introduced to the public in early 2001.

DaimlerChrysler's prototype had a carbon fiber body on an aluminum frame, and although it had a 95-inch wheelbase, it looked small because the front and back barely projected beyond the wheels. It was another example of the company recycling vintage Jeep names, as they had already done in both the 80s and 90s with Jeepster concepts. 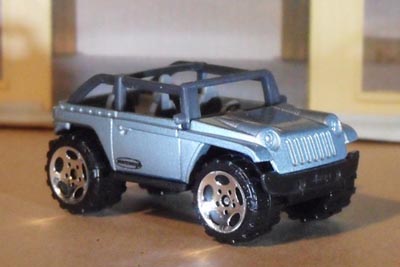 This model was probably a result of Mattel wanting to move more into fantasy cars rather than production models, and it's also a good example of the confusion around the whole "Hero City" concept. But for Jeep fans, it was something more fun than the lame new versions of older models that MBX managed to dream up. 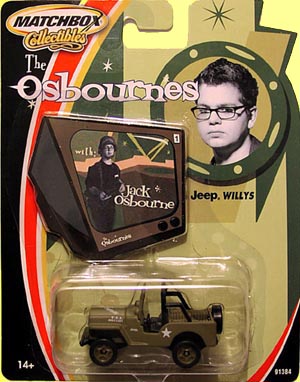 This is all that Matchbox managed to do during 2003 with the flatfender Jeep casting, which was upgraded in 2002 and which seemed to have a huge amount of potential for interesting and realistic models (see The CJ3B Page Collection). Instead we get a lame spin-off from a "reality" TV show. 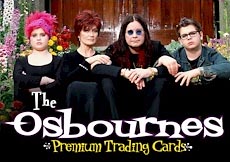 TV and movie tie-ins are nothing new for Matchbox; we've had the Star Cars series including a Mork and Mindy Jeep in 1999. A real low point was the Friday the 13th Cherokee in 2000. But the set of four Osbournes vehicles is a pretty blatant piece of merchandising for a current TV show, which has also licenced everything from action figures to trading cards. 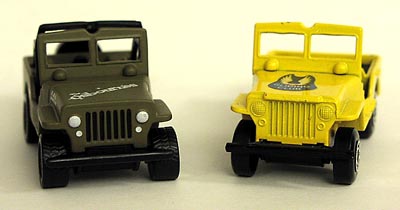 Mike Albright took this photo of the Osbourne Jeep beside an example of the classic Matchbox flatfender casting. The headlights have been shrunk a bit further since the rebirth of the casting as Elvis' Surrey in 2002, apparently to give it a slightly more military look.

See a rear view (50K JPEG) of the old and new flatfender Jeeps. 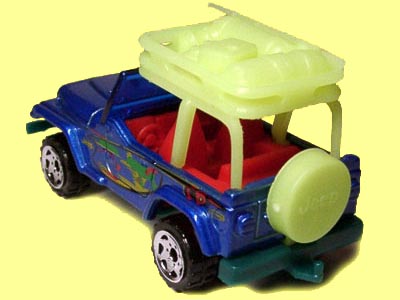 Also linked to cartoons (oops, I mean "reality shows") this year was a yellow Jeep Liberty (25K JPEG) decorated with Bugs Bunny and his friends from Looney Tunes, and a version of the Jeep Willys concept vehicle (25K JPEG) with a graphic of Manhunter Martian from the Justice League.

About the only Matchbox Jeep not covered with advertising was the Wrangler (left) which came in a glow-in-the-dark version in the Camp Fun playset (30K JPEG). Packaging a flashlight with three luminiscent toys was about the only "bright" idea Mattel's designers had for using the Jeeps this year. 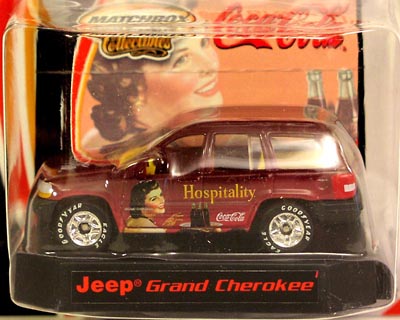 The Coke Jeeps always sell well, so a Grand Cherokee and a Liberty (20K JPEG) were added to that Collectibles series this year.

Mattel's list of 2003 Matchbox releases was dominated by vehicle sets without Jeeps (including Crocodile Hunter with a Land Rover) and by a series devoted to the 100th anniversary of Ford. (Too bad Willys didn't make it to their 100th, which would have been this year also.) Note that some of the vehicles on this page were probably actually released in time for Christmas 2002, but only made it into wide circulation in 2003.

Thanks to Mike Albright and Toshimi Ohashi for the photos. -- Derek Redmond