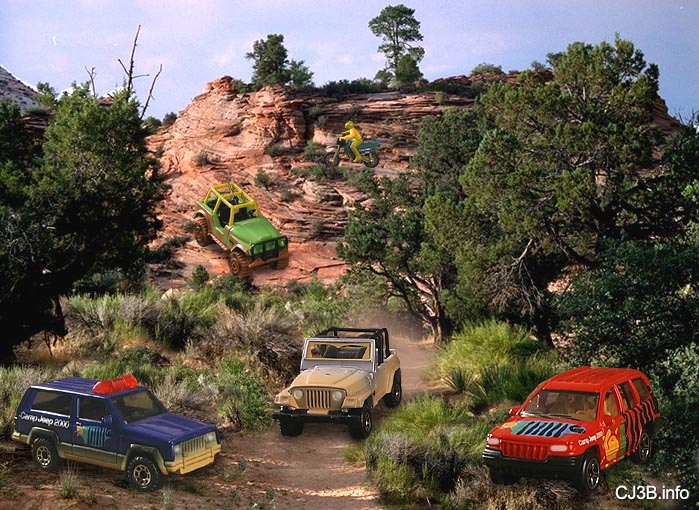 The Matchbox "Camp Jeep" 5-pack, based on Chrysler's annual Camp Jeep weekend event for Jeep owners, was not only one of the best surprises for toy Jeep collectors in quite a while, but also a sign of cozy corporate relations between Mattel and Daimler-Chrysler. That likely means a steady trickle of inexpensive, prototypically-accurate new Jeep toys from Matchbox in the next few years.

I doubt that there are many people collecting only Matchbox Jeeps. As Jarek Skonieczny said recently on the "jeeptoys" e-mail listserv: "I think that a collector running around with a list published by a manufacturer trying to 'get them all' is just plain silly. Anything that says collectible on the package most likely isn't. If the only thing you have to do to obtain a full collection of something is to put down your credit card, perhaps you should think twice. Where's the thrill of the chase? Collecting just Jeeps lets us pick and choose from all the different makes, lines, and periods of toys, quite possibly making it more fun and more challenging than some other collections."

Still, Matchbox has been a reliable producer of high-quality diecast Jeep toys for almost 40 years now, since long before they were considered collector's items. So it's always interesting to see what they release, and it's good to know there will be more.

The Jeeps in this 5-pack, all with new graphics, make a nice set: the WJ Grand Cherokee is identified on the base as 1:58 scale (like the XJ Cherokee), while the TJ Wrangler is 1:56. The CJ-5 still has no exact scale indicated on it, but must be pretty close. All except the Grand have dirt tastefully molded or painted on, making it look like they have really just come off the trail. The background photo above was taken by Mark Fleming in Zion National Park, Utah.

However, it's disappointing to see that the classic Matchbox flatfender Jeep, released in countless variations since 1971, is missing from the Camp Jeep set. In what should be its place in the box, you'll find a larger-scale figure on a dirt bike.

Does That Mean Farewell to the Flatfender? 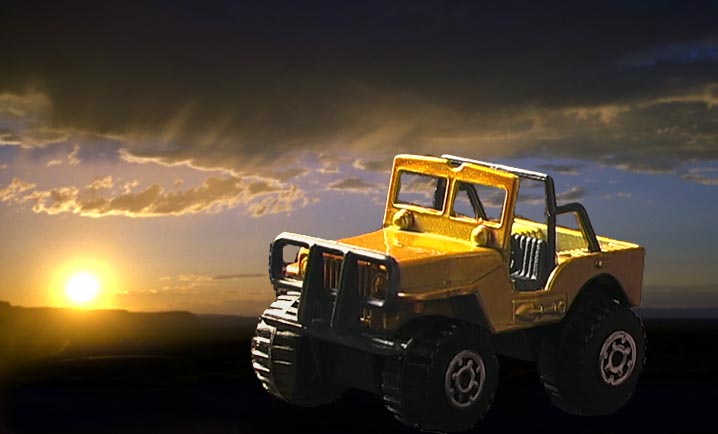 It's very sad that the "Matchbox MB," as it's often referred to because of the shovel on the side (see The Matchbox MB: Is It Really a CJ-3B?), didn't make it into the Camp Jeep 5-pack. True, there are other Matchbox Jeeps which have come and gone (notably the Gladiator truck and the stock CJ-5 in the original Lesney series), but this perennial generic flatfender was around until last year, so it's a shame not to see it appear one more time, in a set celebrating the Jeep heritage.

Maybe Daimler-Chrysler felt it was in fact too inaccurate to include in the set? No, I doubt it. I think there are only so many castings Mattel can keep in production, and they decided they had done all they could with the flatfender. They have a bunch of other Jeeps now, and it was a good time to drop it. Too bad they couldn't have given it one last fling though. The roll-cage CJ-5 will probably be next to go -- but I won't miss it as much as the "MB".

The sunset behind the 1997 gold "Challenge" series MB above, was photographed by Mark Fleming in Monument Valley, Utah. 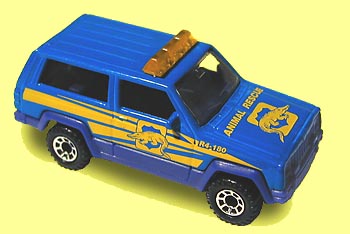 Although Matchbox could be forgiven for simply bringing out more variations of their Fire Chief Cherokee, they have continued their series of more unusual uses for XJ's with light bars on the roof. I guess this "Animal Rescue" vehicle is actually a leftover from 1999 (it carries #36 on the packaging), but it appeared in stores in many places during 2000 (and never appeared in others). 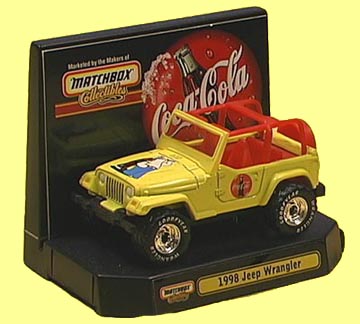 Another corporate giant joins the party: the Coca-Cola Collectibles series includes a version of the 1998 TJ Wrangler which is notable primarily for its large, soft rubber tires and some detail painting (the accuracy of the black paint in the grille openings varies widely). The hood graphic is a polar bear, and the spare tire cover carries the Coca-Cola logo.

In addition to the Coke TJ, there was a "collectible" Motor Trend 1999 Grand Cherokee (60K JPEG) with opening doors in 1:62 scale (surprisingly, a different casting from the WJ in the regular Matchbox line -- we'll have to see what happens with these two). 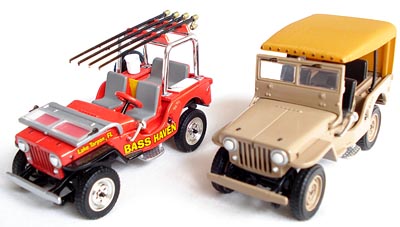 In larger scales, there was the largest model yet (1:18 scale) of the Jeepster prototype (150K JPEG), and some 1:32 scale CJ-2As in the Yesteryear series, including basic harvest tan, a fishing version and a military version. The consensus is that these are very nice models, perhaps the most authentic 2A's ever, although the paint and chrome details are less than completely correct. The larger-scale models are much more expensive than the regular Matchbox collection. Thanks to Jan van den Bor for the photo.

The Friday the 13th Cherokee (80K JPEG) was an unpleasant item in the Character Car Collection series. With a large, permanently attached character figure spoiling the vehicle, it ranks as a misstep (although not as bad as the absence of the flatfender from Camp Jeep.)

Head for the Beach!

Back in the regular Matchbox 1-100 Series, the year 2000 gave us the #65 silver Grand Cherokee with inflatable boat on the roof, and #9 Ocean Explorer Wrangler (seen with the #8 Watercraft and Trailer). See a larger copy of the photo (60K JPEG).

And there was more aquatic action: see also the Base 2000 diving set (100K JPEG) from the Matchbox Launchers series, featuring a white TJ (16K JPEG) with diving logos. 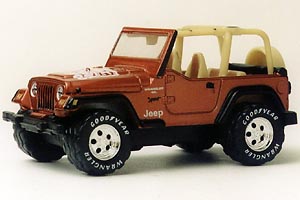 A very deluxe edition of the Matchbox Wrangler, the 2000 Toy Fair Special Edition TJ was passed out to dignitaries and other attendees at the Toy Fair in New York City this year. Photo by Paul M. Provencher from Die Cast Pro.

Thanks to Mike Albright for scanning lots of the models, especially the ones that are hard to find in Canada. Thanks to Mark Fleming for the background photos (see more at Images of the World). -- Derek Redmond