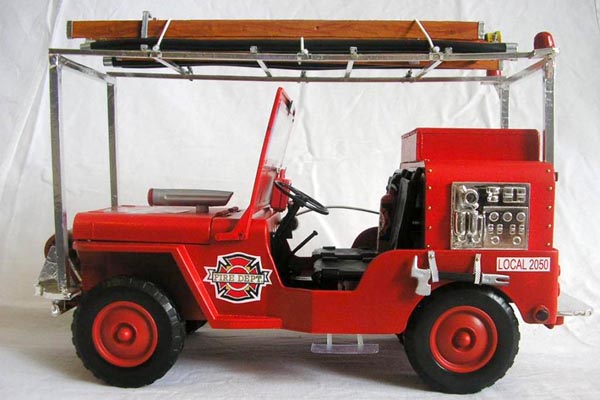 This Willys fire engine was created as an entry in a 2006 Jeep modelling contest in Spain for fans of the Madelman action figure series (80K JPEG). All entries were based on the 1/11-scale military Jeep (100K JPEG) originally sold by Madelman in Spain in the 1970's and reissued in 1999 by the toy firm Ideas de Juguete. See Madelman Jeep Contest on CJ3B.info for more of the entries. 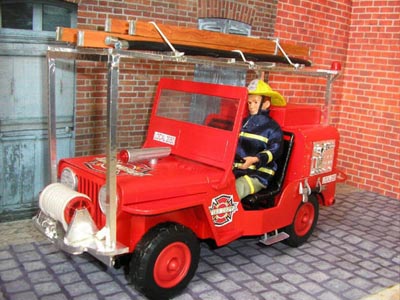 The model was built by "Rivaletto" who says in Spanish in his entry notes on the MadelmanHouse forum:

"This is the version that was made in 1947 for fire departments. It is equipped with extension ladder, a set of connecting hoses, front hose reel for the pump, rear water tank, flashing siren, hand extinguishers, first aid kit, hand axe and rear warning lights.

"The materials that I used are things I had on hand. A cable from a USB connector for the front hose, the top of a ball-point pen for the siren on the hood, caps of bicycle brakes for the couplings of the black hoses (made from electrical cable)... a little bit of everything. The ladder is made with forex painted to imitate wood and metal, and held down with electrical connectors and elastic. Some pieces of one toy and another. Hope you like it." 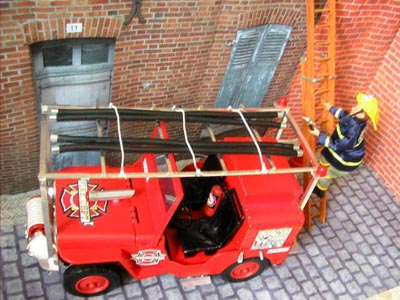 Rivaletto also built a diorama to display the Jeep, including a Madelman firefighter.

The Jeep is a pretty nice piece of work. Putting the pump panel in the rear and the booster reel on the front bumper is probably a smart solution to keeping the overall look of the early fire Jeeps, while avoiding the difficulties of modeling a more prototypical front-mounted pump.

Thanks to modeler Rivaletto, and to Julio Robles of Madelman House. -- Derek Redmond