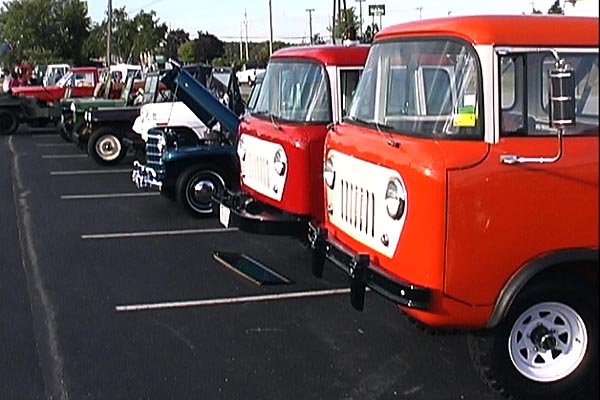 Dennis Caraway and his team brought the Spring Midwest Willys Reunion from Wisconsin to Toledo, Ohio this year. The resulting weekend was a great success, with hundreds of people and nearly 70 Jeeps in attendance. The featured vehicle this year was the Forward Control truck, and indeed this Reunion was a rare opportunity to see a bunch of restored FC's together in one place; FC-150's, FC-170's, even a couple of dual-rear-wheels versions. 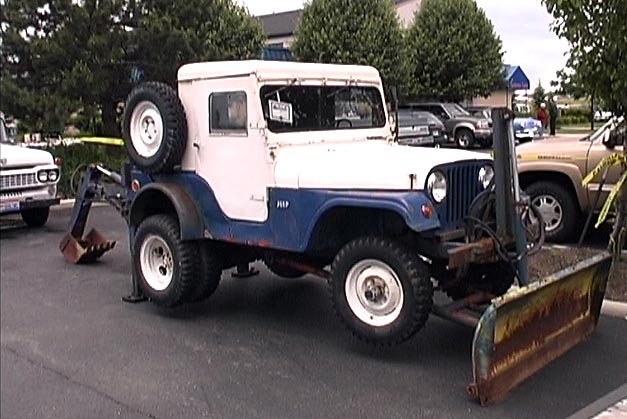 The DRW FC's were not the only duallies in the parking lot; Rick and Paulette Riley's CJ-5 backhoe, formerly owned by Arch Minerals of Wyoming, also attracted a lot of attention. See detail photos of the hydraulics for the backhoe (70K JPEG) and the big rear axle and springs (60K JPEG). Other Kaiser-era Jeeps included Frank Sanborn's Gladiator (and his collection of Mini-Tonka trucks, 40K JPEG.) 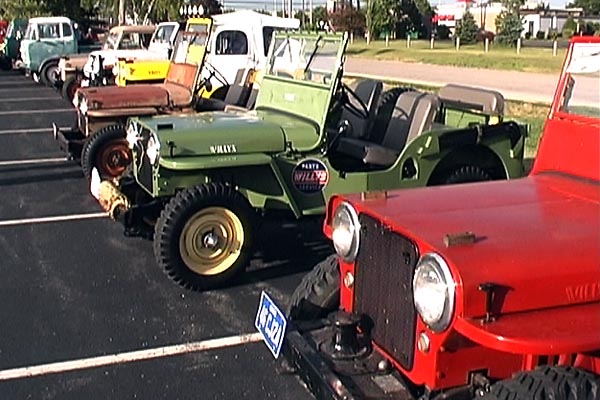 There weren't a lot of Willys wagons or pickups in attendance, and a source of frequent comment was the unfortunate lack of any CJ-3Bs. However, there were some Jeepsters and plenty of CJ-2As, original, restored, and modified. Behind the red 2A with the capstan winch in this photo are a couple of nice examples brought by Jim and Kristi Rorah of Northstar Willys in Minnesota, who also conducted a steering box tech session. 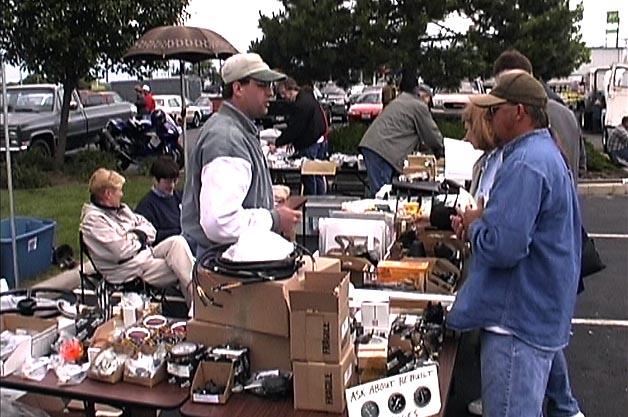 Jim and Kristi were kept busy on Saturday at their Northstar Willys parts table in the parking lot swap meet, where Louie Larson also helped out. Other vendors included Paul and Jane Barry of Willys America who drove in from California. Folks who arrived in Toledo on Friday enjoyed a field trip to see the garage, warehouse and showroom of parts house Willys-Overland Motors. 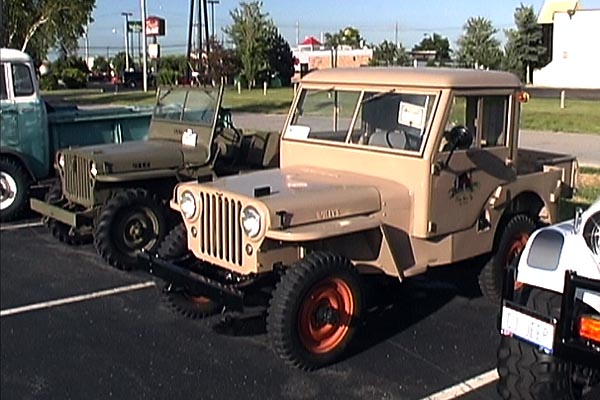 An unexpected bonus was the chance to see Fred Coldwell's restored CJ-2, trailered from Denver by Fred with Daron Wanberg, wearing their "Agrijeep" hats. Fred also signed copies of his book Preproduction Civilian Jeeps, while Daron signed copies of his DVD of rare Agrijeep film, which was screened to great interest at the banquet on Saturday night. Here CJ2-09 is seen beside a deluxe 1946 2A owned by Don Dill of Ohio, with a hardtop halfcab and rear body extension. 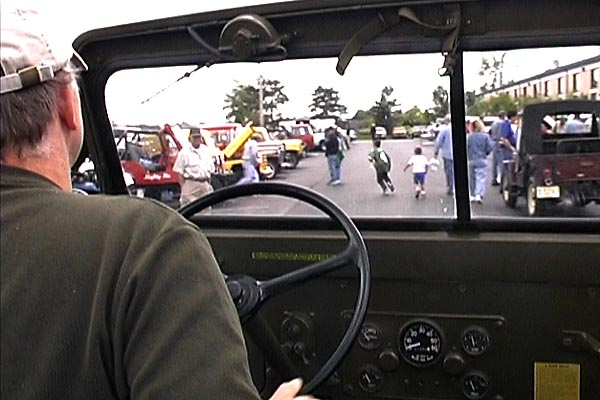 Kids scatter as Mike Peters roars through the parking lot in his 1953 M38A1, narrowly missing George Romond's CJ-2A on the right. Mike was giving a ride to Jim Allen, who spent most of Saturday taking photos and autographing copies of his Jeep books. John Cheney from Ohio also had an M38A1 at the show, radio-equipped. 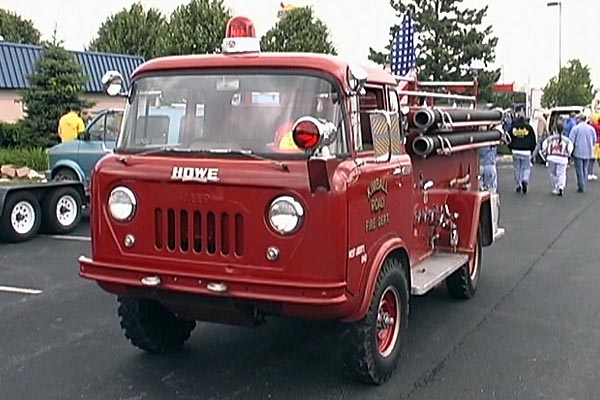 Another Ohio vehicle, which is now featured in some detail in the Fire Service Jeeps section of CJ3B.info, is Richard Kimball's Forward Control fire truck, which was a big attraction on Saturday. This Howe conversion was particularly welcome at the Reunion, since the Toledo Fire Museum at the last minute had to cancel plans to bring their Howe FC. 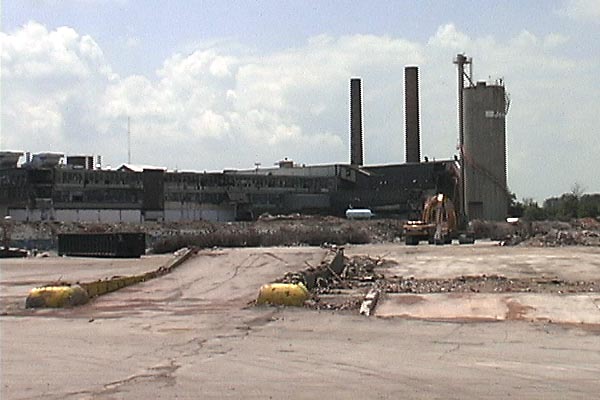 A look at the rubble of the north end of the old Jeep Parkway plant was a somewhat sad occasion. This photo shows the foot of the famous ramp which ran up the back of Building 107. Curator Ron Szymanski gave what may prove to be the last tour of the Jeep House museum, on Friday afternoon. Ron is working hard to make alternative arrangements for the collection of historic photos, artifacts and vehicles.See the Jeep House surrounded by a fence (70K JPEG) and a view of the flattened site of the former Willys-Overland Research Building from the Jeep House steps (40K JPEG).

Jeep Wranglers are still being partially assembled in the remaining buildings of the old factory, from where they are shipped to the new Jeep plant a few miles north on I-75 for completion. The new plant was also the site for the annual Jeep Employees Car Show on Father's Day. The usual complement of interesting Jeeps at the car show was bolstered by many of the vehicles from the Willys Reunion. 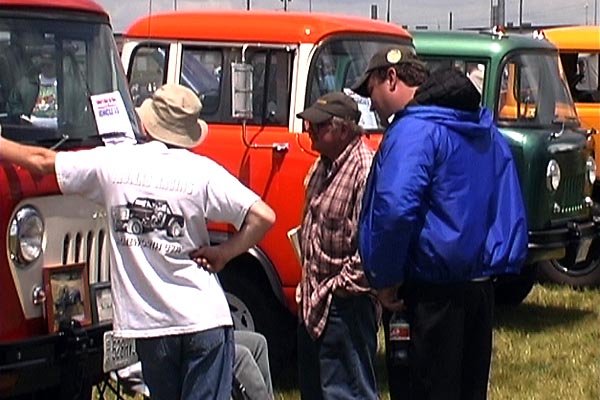 Fred Coldwell and Todd Paisley (right) are seen here admiring another Forward Control which showed up at the car show. These front-of-the-vehicle conversations were of course the main way that many of the Reunion attendees spent their weekend, in between sticking their heads under the hood or under the drivetrain. 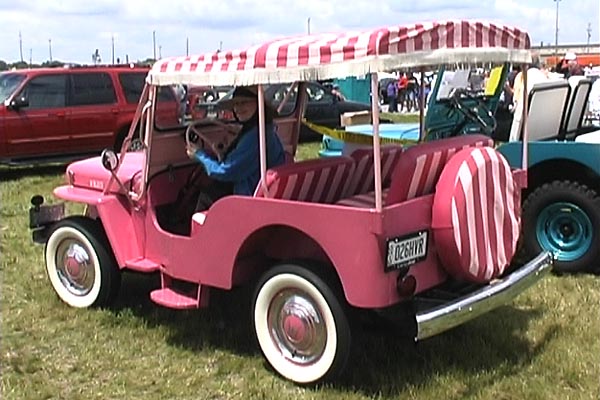 My wife Roseanna, and probably lots of other people, thought that Ron Szymanski's 1960 Surrey Gala looked the like the most comfortable vehicle as the afternoon got hotter. Personally I was in the mood to go to a baseball game, but the Mud Hens were out of town for the weekend, so when our feet were tired of walking around the car show, we drove off to see some of the sights around Toledo (not in Ron's Surrey, unfortunately.) 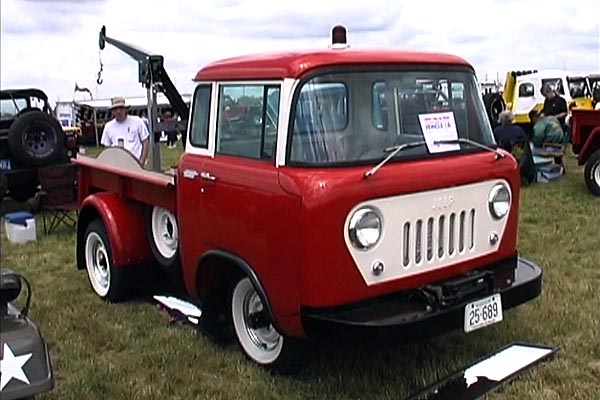 I took one last photo of Craig Brockhaus' 1957 FC-150 with Watson Towboy wrecker. It's probably the vehicle that best represents this year's Spring Reunion, which was perhaps a once-in-a-lifetime FC event. Craig and Paul Barry teamed up to give a an after-dinner presentation of the story of the Forward Control on Saturday night, and afterwards many CJ fans could be seen scratching their chins and allowing how they wouldn't mind having one of those trucks.

Thanks to Craig and Paul, and to Dennis Caraway, Bob Stewart, Ron Szymanski and everybody else who helped organize this event. For the story of my previous visit to Toledo, see On the Trail of Jeep History. -- Derek Redmond

For more information on past and future Willys Reunions, see the Willys Jeep Reunions website.