Another Sibling of the CJ-3B: the FC Jeep

December 1956 perhaps represented the official start of our current era of popular culture. When the Billboard Hot 100 chart for the year was tabulated, not only were three of the top ten records of 1956 by one artist -- Elvis Presley -- but they were also "rock 'n' roll". Although they were the only three rock 'n' roll records in the top ten, the music industry saw the future.

Also in December 1956, the Willys Motors division of the Kaiser Corporation thought they saw the future of four-wheel-drive.

The Forward Control Jeep, introduced that month as a 1957 model, was a symbol of the resurgence of the Willys division, now turning a healthy profit after several years in the red. This profit was largely the result of concentrating on building Jeeps rather than passenger cars, and successfully selling the Jeeps not just in North America, but around the world (see What Henry Kaiser Gave Up to Make Jeeps.) And now the company apparently felt the time was right for the next generation of four-wheel-drive vehicles. 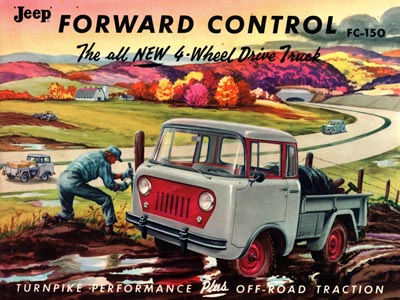 The Forward Control design was the latest vision from Brooks Stevens, who was probably the foremost industrial designer of the era, and had previously worked for Willys on the design of the Jeep station wagon and the 1948 Jeepster. Also in his portfolio were the 1939 Steam-O-Matic iron, the Miller High Life beer logo, the 1948 Harley-Davidson motorcycle, the Excalibur automobile, the Lawn-Boy lawnmower, and the 1956 Evinrude Lark Runabout motorboat.

The FC trucks were given the most colorful and dramatic advertising Willys had used since the introduction of the CJ-2A in the mid-1940's. 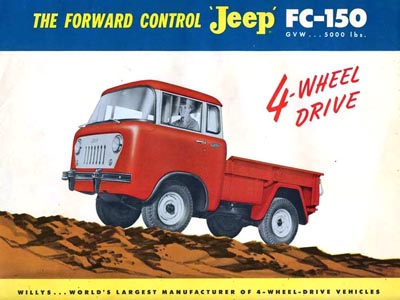 What was perhaps most impressive about Stevens' cab-over-engine vision of the Jeep of the future, is that the first version was built on an almost off-the-shelf CJ-5 chassis with the F-head Hurricane drive train, allowing it to be developed quickly and cheaply. 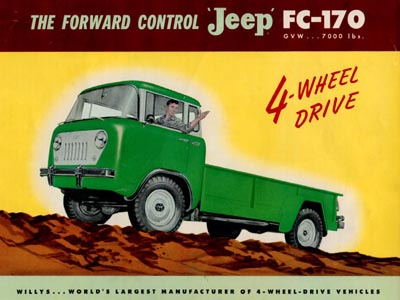 The 150 was joined in 1957 by the longer FC-170, a one-ton truck on a 103.5-inch wheelbase with long axles, giving it a 63-inch-wide track. It came with the Super Hurricane inline-six engine, and was available with a T-98 four-speed transmission. 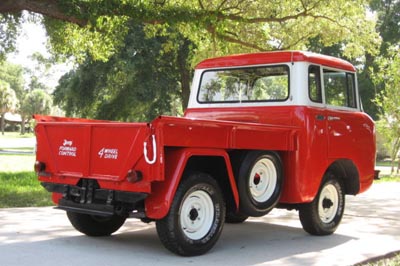 For 1958 the axles of the little FC-150 were also widened, to 57 inches. This change was mentioned in advertising (150K JPEG), because the truck body on the 48-inch track of the CJ-5 chassis had been rightly criticized as unstable. 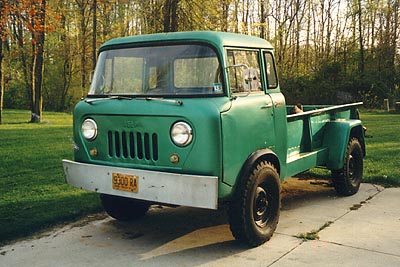 In 1959 the engine compartment, running between the seats in the otherwise-spacious Forward Control cab (40K JPEG), was enlarged to allow better airflow from the front grille. 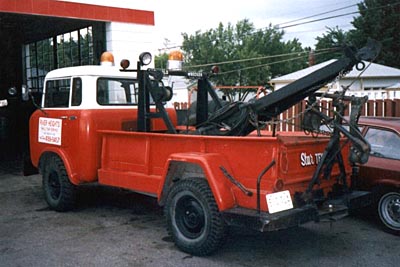 Many of the FC's had stake bodies or speciality bodies such as a dump box (60K JPEG) or street painter (40K JPEG). A dual-rear-wheels version (200K JPEG) was introduced in 1959, and both the single and DRW versions were converted by a number of manufacturers into Forward Control Fire Engines. 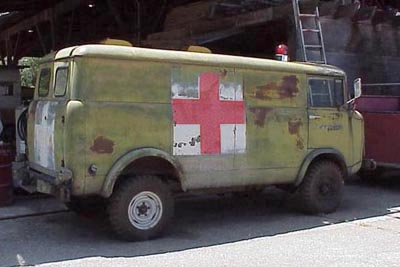 Rock 'n' roll was here to stay, selling many millions of records by the time the Beatles cemented it into the mainstream and it became just "rock" in 1965. But although the Forward Control Jeeps were built until 1965, total production in nine years was not much more than 30,000 units according to Jim Allen in the Illustrated Buyer's Guide: Jeep.

Maybe the Forward Control design was in fact ahead of its time: the Big Three automakers were all trying cab-forward pickups and vans by the time Kaiser dropped the FC's in 1965. But maybe it would never have been right for the North American market, which has always preferred styling based on power and speed, to styling based on efficiency. The FC looked more like a European vehicle, and some years later EBRO in Spain built a successful series of Jeep cab-forward trucks (125K JPEG) not unlike the Forward Controls. Mahindra & Mahindra in India purchased the FC tooling from Kaiser Jeep and continued to build forward control vehicles for decades -- see Mahindra's 1972 Jeeps on CJ3B.info.

Thanks to Steve Chabot and to the Z. Taylor Vinson Transportation Collection for the brochures, and Bill Brennan, Jolly Goodfellow and Buck Toenges for photos. Archival photos from the Jeep House collection. -- Derek Redmond