People often ask about the purpose and necessity of the "positive crankcase ventilation" (PCV) fittings found on the F-head engine. The engine was built with a vent either from the top or the side, connected to the intake manifold which would inhale and burn gases from the crankcase.

Bill McCarthy notes, "All CJ engines used PCV systems, but Jeep pickups and wagons used draft tubes, and all 2WD models used the road draft tube. If you have a road draft tube on a CJ, the engine was probably from another Jeep model."

Eric Lawson adds: "I have seen many Jeeps without the PCV system, and they run just fine although the oil should be changed more often, especially if you are driving in dusty or wet areas. Often the PCV system was replaced with a draft tube that attaches to the rear bolt that holds the exhaust valve cover in place. This tube extends below the oil pan. As the Jeep is driven forward a vacuum is formed and the air flow that this causes removes the blow-by gasses from the crankcase. I think people did this because they thought that the PCV system reduced the engine's horsepower. There are several things wrong with the draft tube idea -- they don't work well at low speeds, they provide a path for water and dust to get into the crankcase, they leak oil, and finally, the draft tube 'just ain't right'."

The 1956 CJ-3B Parts List shows a vent on the rocker arm cover on top of the cylinder head (#1 in the diagram): 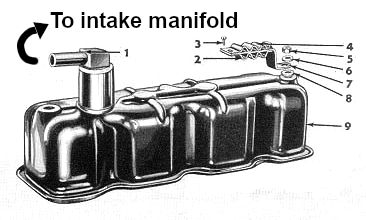 Jim Sammons describes the purpose of this system: "Most of the F-heads I've seen vent out the top of the valve cover. A hose runs from the vent to the intake manifold where the crankcase vapors are sucked into the engine and burned. Some kind of crankcase ventilation is necessary or pressure from the pistons going down on the intake or power stroke would eventually blow all the oil out of the engine. If you didn't have any ventilation at all you would know it. Oil would be blowing out of the engine from everywhere it could." 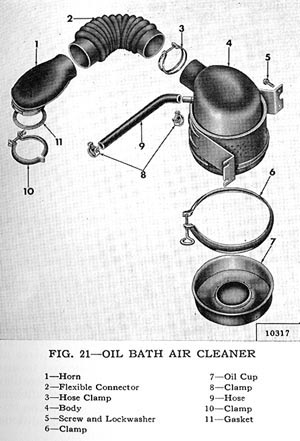 "Since there is a vacuum in the crankcase, the air has to come from somewhere, and rather than suck it in unfiltered, it sucks it from the oil bath air cleaner, through a rubber tube and into the oil dipstick tube. (See the hose in the early version of the oil bath parts illustration, right.)

"I guess it is called a closed system in that any air drawn into the engine is filtered and any gasses sucked out are burned.

"Since you have a vacuum in the crankcase then dust will enter the engine through the hose connection on the oil tube if it is open. When I took my L-134 to a mechanic the first thing he did was install a hose from the oil bath air cleaner system to the oil tube. Leaving off the hose negates some of the effect of the air cleaner, allowing dirt into the crankcase."

How to Connect the Lines

Simon B. says: "I can't figure out how to connect up the crankcase ventilation. I have four holes that need pipes:

"I have no PCV valve on the exhaust valve cover and I don't see how it would connect to the fuel/vacuum pump even if I did have one. I think that I should connect the oil filler tube to the air cleaner, but then what do I do with the manifold pipe and the pipe from the rocker cover? My jeep is a '64. Had they done away with the PCV valve system by then? I have a '50's scrap motor for spares and it has no breather connection on the rocker cover but does have the PCV valve on the exhaust valve cover. Please help!"

Eric responds: "From what I've seen on what I think are 'unmolested' engines, when the rocker arm cover has the PCV port, the side valve cover PCV port is not used. This port is closed with a large fender washer and a bolt, and the bell fitting isn't used. The line that one sees connecting the dip stick tube and the air filter is in place as usual.

"The vacuum port under the carburetor has an L-angle fitting connected and the male threaded end of a PCV valve is connected to this fitting. The other end of the PCV valve has a hose nipple. A hose connects from here to the port atop the rocker arm cover.

"The reprinted manual for the 'newer' Jeeps (mine has a light blue cover and covers the 4F-134 and the 225 V6 engine, but not the 4L-134) shows this arrangement in the tune-up section. You need to make sure that you get a PCV valve that is set up so that the air flow is correct. Jeep valves need the vacuum on the threaded end. "Standard heater hose won't work in the PCV system as it is not resistant to oil and gas fumes. You will need to get some large diameter fuel line for this. I found some suitable hose at a hydraulic line shop." 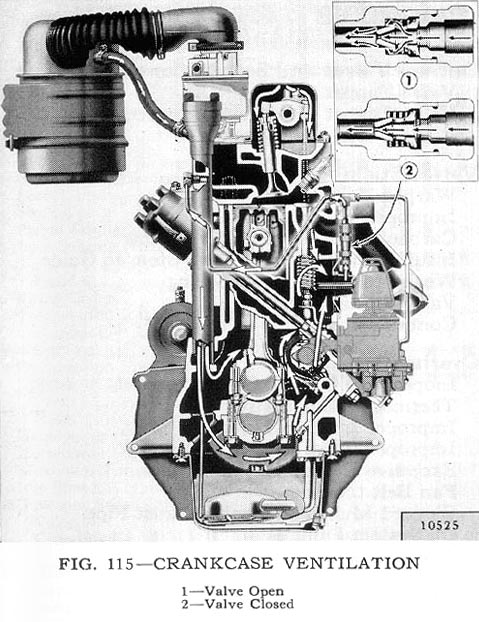 The 1965 edition of the Jeep Universal Service Manual (see "Technical Information Sources" on the CJ-3B Specifications page for reprint information) shows the rocker arm cover without a vent (right). This illustration shows a crankcase ventilation system which vents out the side of the engine into the vacuum line leading from the fuel pump to the intake manifold.

Eric Lawson describes the system (seen in this Hurricane engine illustration from the 62-17 brochure): "The line going to the fitting in the intake manifold under the carburetor is the vacuum source. This is usually a steel line. You should have a PCV valve on the side of the T that connects to a bell shaped fitting on the side valve cover of the engine. The remaining side of the T goes to the outlet fitting on the vacuum part of the fuel pump. 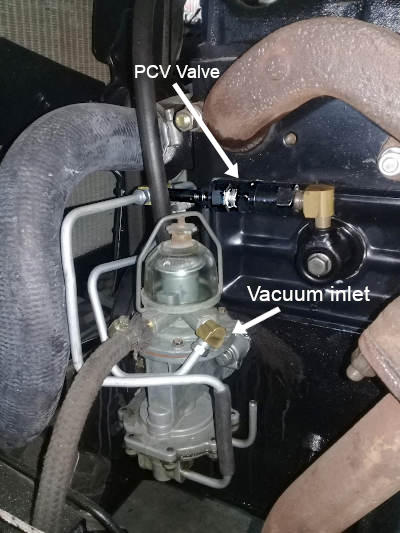 "An unused inlet port on the vacuum pump should be sealed, especially if the outlet is connected to the T fitting. Leaving the port open will make the engine run lean." 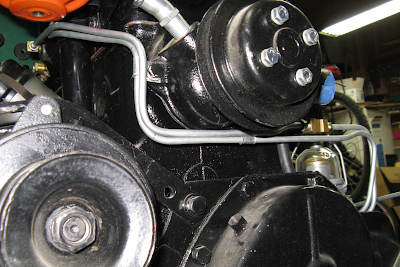 The steel vacuum lines cross the front of the block and are routed up toward the intake manifold and carburetor. 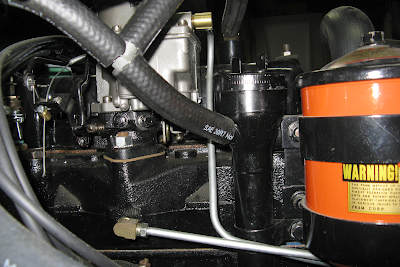 The steel line coming from the vacuum output on the fuel pump and from the PCV valve, brings the vented fumes to the intake manifold to be burned. The vacuum input line is connected to engine vacuum at the carburetor.


The Whole Ball of Wax 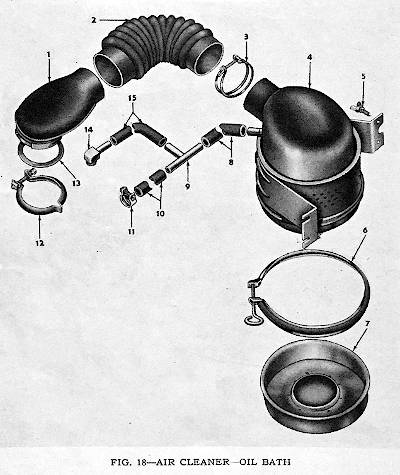 In the case of an engine which has both the PCV valve on the side of the block, and the vent on top of the valve cover, that vent can be used as another point for air to go in to the engine. A "T" in the hose from the air cleaner allows it to connect to both the oil filler tube and the valve cover vent, as seen in this late version of the air cleaner parts illustration. 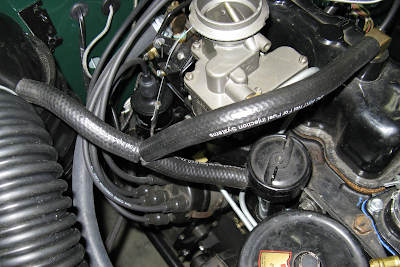 The clean air hose going to the oil filler tube and the valve cover is seen in this photo of Rus Curtis' installation.

Pete: "My oil dipstick shows some whitish gunk on it. I seem to remember from my past that this means water vapor is collecting in the crankcase, probably from an improperly working crankcase ventilation system. 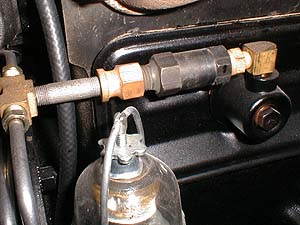 "I have the oil filler tube and top of the valve cover vented to the air cleaner for filtered intake to the PCV system, and I have a PCV valve connected to the side of the engine at the bell, which in turn is connected at the manifold below the carb.

"Question: How does one check the valve for proper operation seeing as how it's all screwed together. Do you just unscrew it all and screw it back together as much as needed to feel for a vacuum?"

Rus Curtis answered: "First, it's important to ensure all the hoses have a good seal and the oil filler cap has a good seal for suction. I had to add a couple of layers of gasket to my oil filler cap/dipstick to seal and my gunk disappeared. 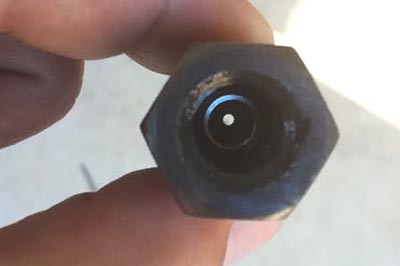 Chet: "When I tore into my valve this is what I found (right).

"Is it fair to assume...that on a recently rebuit engine, that is using oil (2 quarts in 500 miles) oil fouling plugs badly, not leaking and only smokes occasionally... that the source could be a PCV valve with 'no guts'?"

Don Norris: "In the Service Manual in the TUNE-UP section, under "Excessive Oil Comsumption" one of many possible problems listed is "Crankcase Ventilator Not Operating." 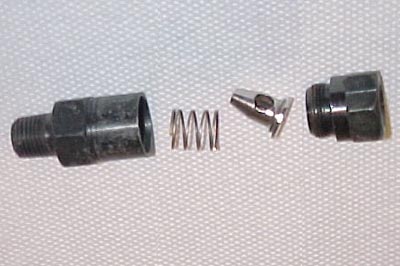 Rus Curtis: "My PCV valve was also empty. I got this replacement used valve from Harry Sheets (Midwest Willys) and I took this picture of the guts. Here's what the internal parts look like.

"Instead of throwing it out like modern valves, you disassemble it, clean it and put it back together. There's a spring and a valve that should be inside. The Service Manual illustration (85K JPEG) shows how the parts fit together."
Another reader added that for later systems, "The little fitting on the side of the oil filler tube is where clean air from the air filter enters the crankcase. Disconnect the line and put your thumb over the fitting. At idle, a tiny bit of suction should be felt. Rev up the engine and the suction should increase."

Thanks to Don Norris, Rus Curtis, Federico Cavedo and all the other contributors. -- Derek Redmond