by Terry Wohlgenant
My 3B is being placed on a CJ-5 frame until I can restore the original frame and running gear. When I pulled the body off my 3B I found the frame was bent several inches to the passenger side. 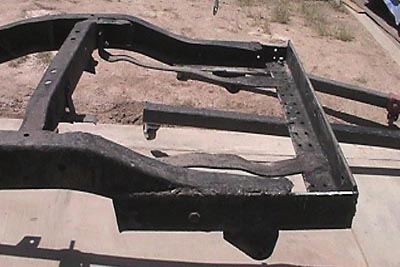 My friend had a early CJ-5 frame (left) complete with running gear that didn't appear to have many miles on it, but the rear of the frame was demolished and someone had welded in a bunch of steel and installed leaf springs from who knows what.

First thing I did was to test fit the body, checking body mount locations and length of the frame and body. The wheelbases are different; the CJ-5 is 81", the 3B is 80". With the front body mounts lined up the rear axle seemed to be roughly centered in the wheelwell but the frame extended past the body and three of the body mounts were not correct. There is a crossmember above the rear axle that is farther forward on the CJ-5 frame and looked like it would interfere with the body, although raising the body only 1/4 in. to 1/2 in. will allow the body to clear it. It won't be too hard to move the crossmember if it is a problem. The front and rear leaf springs on the CJ-5 are longer than the 3B. The front crossmember below the grille is different on the two; the grille on the 5 mounts to the crossmember while the grille on the 3B mounts on the two frame rails. Transmission and transfer case shifter lever locations fit the 3B body. 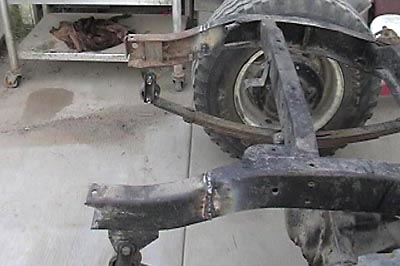 I was able to use a cut up DJ-3A frame for donor pieces. I cut the bad stuff off of the rear of the CJ-5 frame and welded in the rear sections from the DJ frame using both my 3B frame and the DJ frame for reference. Since the rear springs on the CJ-5 were not correct I used a pair that are correct for a 3B. The 3B springs are shorter than the CJ-5 springs so the front spring hangers were moved toward the rear. The centerline of the rear axle was not moved. The rear of the frame is now the correct length for the 3B body. 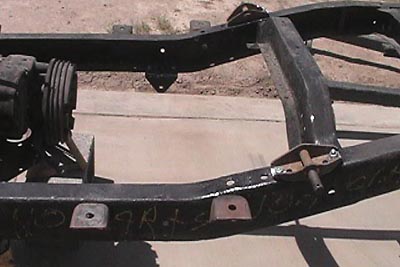 I had to move one body mount and add two. The body mounts at the front of the rear wheelwell are different between the two bodies, CJ-5 bolt directly to the top of the frame rail while the 3B bolts to mounts on the side of the frame rails. The upper shock mounts for the rear axle were moved toward the rear. 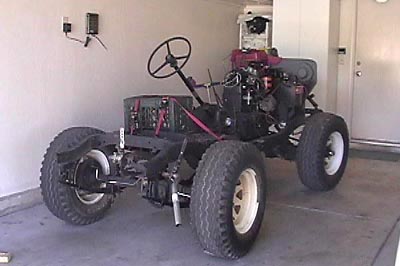 The front grille mount for the CJ-5 was cut off of the crossmember and new mounts fabricated for the 3B grille mounting on the frame rails. The battery tray had to be moved toward the rear. The new grille mounts and battery tray are just tack welded in until the body is mounted to check for the correct positioning. I have mounted the 3B grille with radiator and shroud, bent and installed new brake lines and hoses, repacked wheelbearings, adjusted brakes, etc, etc, and can now drive it around without the body. Whoohoo!

All in all the modifications needed were not too bad. I think you'll find the CJ-5 frame is longer from the center of the rear axle to the rear of the frame. The CJ-5 frame I started with was pretty well destroyed at the rear so I am not positive on the length. The rear springs looked like they were about a 4" lift while the fronts looked like about 2.5" so the rears were changed to 2.5" lift springs that I already had for a 3B.

It may be a bit of a challenge making the rear end look correct with the longer frame and longer springs. For me it was easy since the rear of the frame had to be re-built and the springs changed anyway. -- Terry Wohlgenant

Use the Longer Frame

Jonathan George had an intact CJ-5 frame, and mounted his CJ-3B body with the extra frame length extending behind.

He said, "Mechanically, my CJ-3B Bruiser (70K JPEG) was pretty stout. It runs on front and rear Dana 44's, a Chevy 350 mated to a T-18 and twin-sticked low-geared Dana 300 T-case. What I had in store for Bruiser was a complete frame-off build-up. I planned on stripping everything apart and rebuilding it on a 1971 CJ-5 frame. Bruiser's old frame was pretty hacked up and bent." 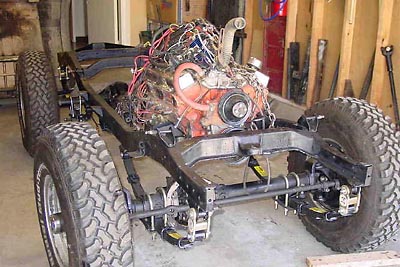 "I used motor mounts from Advanced Adapters. Mounting the motor was the most critical step. Taking measurements from the old frame, new frame, the firewall, and checking clearance, I welded the mounts to the frame. The front crossmember is a little close to motor. Once the Saginaw steering is in and another crossmember welded in farther forward, the old one will be removed." 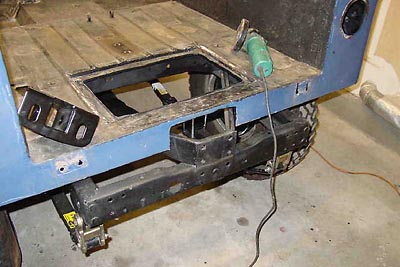 "Since the 3B body is shorter than the CJ-5 body, I will have about a 4" step in the rear where the frame extends beyond the body. This won't be a big deal because I will incorporate this into a bumper." 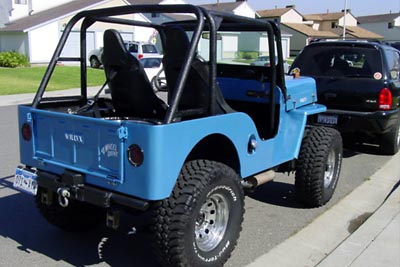 On the CJ-3B Bulletin Board, Chuck P. mentioned: "The only difference I have seen between my 2A frame and my spare 3B frame are

Thanks to Terry and Jonathan for describing their projects. -- Derek Redmond

See a well-known 3B on a CJ-5 frame in "High Hood High Jinks" on the CJ-3B Magazine Articles page.