William Buchanan recently finished building a highly modified CJ-5, and has some general suggestions regarding welding and modifying an old Jeep frame:

"Starting with a completely stock early CJ-5 frame (similar to the 3B), I first ground out all of the factory welds. At the time these frames were welded in '53-'62, production welding was very crude -- the welds on my frame were so bad they literally looked like they had been glued together using a coathanger hooked up to battery! I then rewelded every joint with a MIG welder. MIG welding is a lower temp process than stick or heliarc, and as a result the "heat affected area" around each weld is less severe. Also you should take care not to have any undercut areas at the begining or end of the welds -- this prevents cracks from forming.

"To clear up another misconception, these frames were made of the cheapest steel available and there is nothing magic here -- frames crack usually at poorly done welds, not just any old place. Good quality welding makes a huge difference!

"The areas I reinforced were:

"This is all that was done to the frame for my very serious rockcrawler! The jeep will do about 1250RTI, and so far the only problem I've had is the body mount bolts keep loosening! Twisty,twisty!

"The reinforcements that I made for extreme use really aren't very extensive, and they aren't necessary for the person who is not going to thrash the vehicle mercilously. The real secret is in the welding. If you go in, prep the old welds correctly, reweld every thing neatly, and just does a nice job you probably won't have any problems after that. This isn't rocket science!"

JC Jenkins: My frame guy says "DO NOT HEAT THE FRAME". It is cold rolled steel and then cold riveted, for flexibility -- wherever you heat it hot enough to bend it, it will crack. If you must heat your frame: to bend only, heat to a dull red, in a V shape, with the wide part of the V being the side you want to shrink. Any welding done on frames should be done by a competent, qualified expert, but if you must weld it yourself, use very low hydrogen electrodes. This is an oversimplification of what he told me."

Jon Paulsen: "What to do where it is already cracked? Where I welded on mine, I heated the area deep dark red around the weld and slowly backed off the heat. Hasn't cracked yet, but hasn't been that long since the repairs."

Rus Curtis was recently trying to decide how to deal with the frame on his 1954 CJ-3B. Here was his problem:

"I've got the tub off the frame of my 3B and had every intention of boxing the frame. This was due in part to reading articles in magazines over the past few years about other people doing it. I also wanted to box the frame because after replacing four badly sagging springs, the new springs allowed the frame to torque so badly that the clutch linkage snapped and the fan lost a blade from banging up against the shroud. I do plan to take the frame into a specialty shop and have them check it for cracks and alignment. I thought, after reading those articles, that the practice of fully boxing the frame was normal for old fatigued metal, buthave heard other opinions since then."

Jon Paulsen responds: "Flat-fenders are known for good articulation. This is not really because the spring design is so great, but more because the frame is twisty. If you box the frame, you will lose articulation in a big way. When I off-road mine, I hear the body let out low frequency pops as it flexes, and I get a sinister grin. I have found no cracks in my frame. If you do box it, you could also get some cracking where it would have flexed. I assume you're either not interested in staying stock, or you don't mind some minor variance, since you want to box the frame.

"AdvanceAdapters Inc. has the fix for the clutch linkage. For about $125, they have a chain clutch control which works very nicely. You will bang the clutch pedal on the floor when you shift for a few weeks, until you get used to the light feel. Smooooooth as a baby's uh, back-side.

"It could be necessary to box the frame or add a cross brace if you drop in a big V8 and have a heavy foot. But I vote to leave it stock. It's functionally better."

Terry Howe suggests: "The best way to box the frame may be to run plate on the inside of the channel. This should strengthen the frame without losing flex. That is what a friend of mine says -- his frame split in two out in Moab last year. Most of the flex probably comes between the cross members, that is probably why this area is normally full of cracks, especially the front crossmember."

Bruce Osborn cautions: "I wouldn't box your frame unless it is completely fatigued. As mentioned by Jon, the frame was designed to flex so that the wheels stay on the ground when you have the corners raised. However, I would suggest that you box the front-front spring mounts (7 in the photo). The frame flexs over the mount, fatigues, and the spring perch breaks off. This is bad. This also happens on the rear-rear spring mounts. If you look at the front-rear mounts (9), you'll see that they are already boxed. I would also take a close look at the bottom of the bumpers where they tie into the frame.I'll bet they're fatigued and cracked from frame flexing. From what I've read, boxing the frame deserves professional attention since it isn't a matter of just closing the channel.

"Also, I've found that the front crossmember under the radiator (15) is a problem-prone area. It tends to separate from the frame. I had mine welded back in place, but in retrospect I wish I'd added a right angle brace between the crossmember and the frame. I'll do that next time when I break it again. I also think this would aid in "diamonding" the frame and help prevent the frame rails from sliding front-to-back in relation to each other (which is also bad). I did have him weld ears to the frame, front and back, so now my rear bumper is reinforced also."

Note from Derek: See a closeup of the crossmember welded to the frame (170K JPEG). See also the custom front crossmember on Jon Paulsen's CJ-3B. 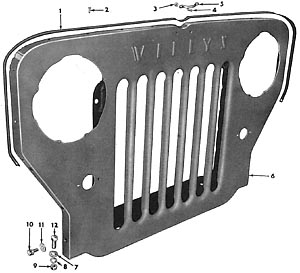 "The patch I came up with (I got the idea when I was crawling around under a friend's CJ-5) is to drill a hole through the center of the crossmember under the grille and float the grille on one bolt, with a plate that reinforces the radiator extension where the bolt comes through the grille. I added a polyeurethane body mount bushing between the grille and the crossmember. This solved the grille destruction problem, but there was still a problem with the brackets welded to the frame. When the frame flexed, the brackets raised up and pounded on the grille, resulting in a major clanking sound as well as deforming the corners of the grille, even though there was about an inch or so of clearance with the bushing installed. I ground the brackets off the frame and noticed a much quieter ride. 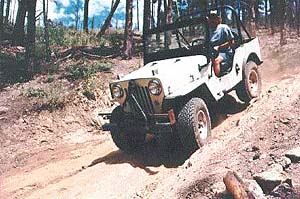 "This is a non-restorable modification, but one that saves the grille from massive destruction if you four-wheel your Jeep.

"BTW, I've been pretty disappointed in my AA chain clutch control. It's hard to adjust and it needs adjusting a lot. The reason that it's hard to adjust is because the adjusting nut is only pressed on and it twisted loose. Now I have to remove the chain from the throwout lever, guess at a length, put it back on, test it, take it off, guess at a length... Well you get the idea. Plus, I still lose my clutch when the frame is really flexed. There's just too much movement in the frame to mount the clutch there, IMHO. But, when it works, it is smooth. In retrospect, I think I would stay with the stock arrangement, rebuild it, and invest the $125 in something more critical."


John Hubbard has modified the front end of his '53:

"This is a photo of the boxing I had to do to the front of my '53 CJ-3B frame to repair front end damage sustained in an accident. (See a larger version of the photo, 50K GIF.) Another thing in the picture that might be considered a frame modification was changing the shock mounts from the washer and cotter pin style to the CJ-5 threaded-styleshock pin. Since I am mounting a Warn winch on the front of the vehicle, which had sustained some damage (weakened the metal), we added anadditional strengthening plate on the outside of the frame as well.

"The need for boxing the front of the frame (from the radiator supportforward) is sometimes dependent on whether or not you are going toupgrade to Saginaw steering. If you upgrade (which would requiremounting the Saginaw box on the inside of the frame, driver's side), mostpeople box the front part of the frame on both sides."

(Note: John has noted some differences in the framesbetween his '53, '54 and '61 CJ-3Bs (see Hubbard's Halfcabs FAQ on CJ3B.info), and it is interesting thatthe back of the '53 frame (from the rear spring hangers back) haspartial boxing all the way to the bumper.)

JC Jenkins agrees: "Boxing the front frame horns is necessary if you aregoing to install Saginaw steering (power or not). My welder informed methat every time you weld on these cold riveted frames,they get brittlearound the welds. Boxing the entire frame is a mistake, as the CJ-7 hasproved -- water and debris get inside and rust the frame from the inside out. These old girls are supposed to creak, pop and moan as they climb roughterrain -- I'd be creakin', poppin' and moanin' a lot louder without mine."

See also details of the frame reinforcement Tom McHugh did in conjunction with his installation of a Pinto Turbo engine in his '53.