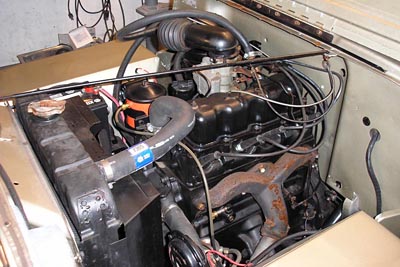 Refinishing of the engine and chassis components of a CJ-3B to stock appearance is fairly simple. Everything under the hood and under the body was painted basic semi-gloss black, although some items such as the radiator shroud do occasionally show up in apparently original olive drab paint, presumably as a result of identical parts being used on CJ's and military Jeeps. A Fram oil filter cannister would be Fram orange (4K GIF).

According to the 1956 Parts List the cylinder head of a standard compression engine should be blue, and a high compression head should be black, but this is one policy which was apparently never adhered to. 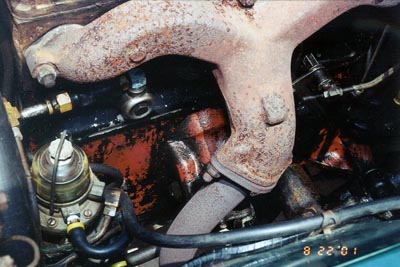 An orange paint that looks original on some engines is apparently a sealer coat that was applied under the black finish color. This photo of Lawrence Wade's original 1955 CJ-3B is by Rus Curtis.

Ian Fraser asked on the Bulletin Board for paint suggestions for the engine of his Air Canada Staff Car: "I managed to pressure wash off 54 years of engine grime with the aid of Zep orange degreaser and a little oven cleaner. I also plan to lightly glass bead blast to really clean up the engine. My question is, what should I use as a primer before applying paint? Looking to paint the block, and will do the accessories separately in another shade." 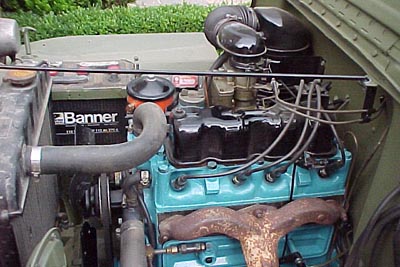 Hoghead: "I'm a Rustoleum nut. It works for me -- I'm not sure if they have any high heat paint or not. I painted my AMC 360 with 400 degree paint from Autozone. The exhaust has to be 1200 or better high temp paint. The motor has to real clean of grease to get it to hold, and it sounds like you've got that covered. As far as a color, I've seen every color in the rainbow on 3B motors..."

Steve: "I used Rustoleum primer (gray) then Duplicolor high heat paint -- so far it's held up pretty good (did it 5 or 6 years ago)."

Eddie: "When the engine is out I just use good old engine enamel with no primer. Holds up fine. But a few engines I have done in the vehicle, I used POR 15 engine enamel and just brushed it on. Again, no primer. I did the 360 in my Commando, the 196 L-head in my 63 Rambler, and just did my 4.0 going into my 73 Gremlin. They all turned out great!"

Ian: "After talking with a friend of mine on the subject he strongly suggested using a galvanizing primer. He has done quite a few antique GM A bodies and always has great success with this as a base before applying the paint on his engines. Duplicolor high heat with ceramic in a burgundy will be my choice of color, seeing the original color of the engine appeared to be that. He also suggested a paint by Bill Hirsh Ent. But I would really have to dig up a money tree for that as a pint sells for about 45USD. Anyone have thoughts on the Duplicolor ceramic high heat paint?

Bob: "I love the Duplicolor brand ceramic paints and use them for a whole bunch of things around here. It hold up well. Lots of stuff on my Jeep is done in Duplicolor. That being said, the last time I painted my engine, I used POR-15 engine paint. It goes on thick and looks great. An engine is such a small area, I think I only used 1/2 a pint and did not end up using it all."

Griff: "Anybody used POR 15 manifold gray? Is it worth it on a manifold for a 3B? Mine really looks bad. I am going to replace the exhaust and the gaskets on the manifold anyway. Is this worth it or should I leave well enough alone?"

Gary: "I personally am not a fan of POR15 but I know others have had good luck with it. Instead, I have used an aluminum-colored heat paint that I brush on top of a wirebrushed manifold. It looks nice and it lasts for several years on my MG (I don't have a running 3B yet!) A bonus is that the small can, a pint I think, costs a couple of bucks and does the manifold about 3 times. Good luck with whatever you go with -- as long as you use a product rated for high temperatures you can't lose, in my opinion." 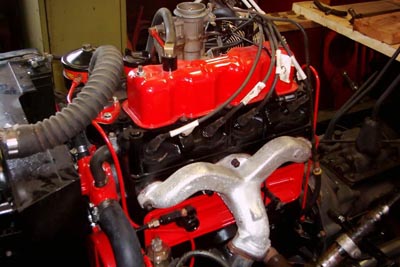 Steve: "I had a can of high-heat aluminum that was kicking around the garage. Cleaned up manifold and gave it a shot. Picture shows what it looked like when I did it 6 years ago, and it has held up pretty well."

Eddie: "I just painted the exhaust manifold in my 73 Gremlin yesterday. And my 72 Commando 4 years ago. Great stuff, nuttin better! The manifold in my Jeep still looks like it did 4 years ago. And a small can will last ya forever. I have done 3 manifolds and still have most of the can left. It will look weird when it goes on, but when it dries it looks great. Stir the stuff, don't shake it."

Griff: "Thanks everybody for the help. That picture sold me. I think that's the route I will go." 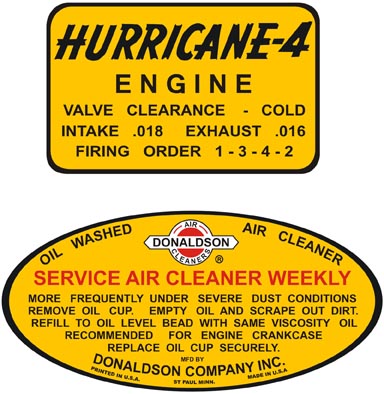 The final touch, and one that will also add a bit of color if you go with a black engine compartment, is the application of several original-style decals, on the valve cover, Donaldson air cleaner, and Fram oil filter.

See the oil filter decals on the Oil FIlters for the CJ-3B page.

The illustration at right shows 2010 reproductions of the original Hurricane engine specs decal, and the decal with servicing instructions for the Donaldson oil-bath air cleaner. These were produced by Simon Bruton in South Africa, and the full-size high resolution copy (420K JPEG) can be printed on adhesive vinyl or paper.

Examples for the placement of the labels on the valve cover (30K JPEG), air cleaner (30K JPEG) and oil filter (15K JPEG) are from an original 1959 Jeep formerly owned by Steve Chabot.

Reproductions of the decals are also available from some parts suppliers.