Although the CJ-2A was a forerunner rather than a true sibling of the CJ-3B, I thought it was fair to include the original Nellybelle here with the "Siblings of the CJ-3B" since she was a TV star during the 3B era. There is also an article on Nellybelle Jeep Toys in the Toy Jeeps Pages. -- Derek Redmond 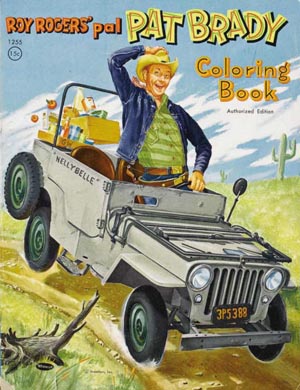 The Roy Rogers Show, broadcast on television between 1951 and 1957, developed out of the series of B-movies made in the 1930's and 40's starring the "King of the Cowboys". It featured a 1946 Willys CJ-2A Jeep named Nellybelle, which had some unusual bodywork. It was in fact owned by Roy, but was driven in the show by his comic sidekick, Pat Brady.

The name Nellybelle apparently developed out of Pat riding an ornery mule in the earlier movies, and addressing it with phrases like "Whoa, Nelly!" Pat Brady passed away in 1972. 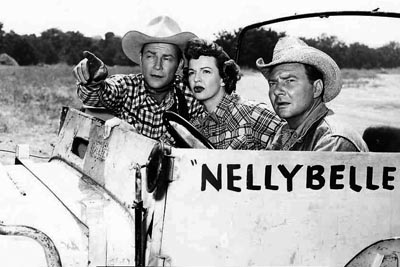 Ralph Perry has noted that in most episodes of the show, Nellybelle's name is painted on her doors, but "in the early episodes the name did not appear on the doors. Would you know what year the name was added?"

This promotional still of Roy, Dale Evans and Pat Brady is from 1952. See the caption (100K JPEG) added by NBC. 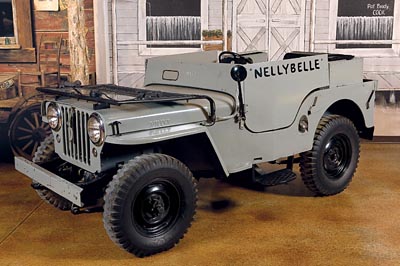 The real Nellybelle was displayed for many years at the Roy Rogers - Dale Evans Museum (right) which moved from California to Missouri in 2003, and closed in late 2009.

The Jeep was sold at auction for a reported $116,000 by Christie's in New York on 14 July 2010 to a private collection. Colin Peabody wrote to CJ3B.info: "I hope Nellybelle goes to someone who will treat her with love and respect! With the Museum closing, and the sale of all the memorabilia, another American legend will pass from us. How unfortunate." 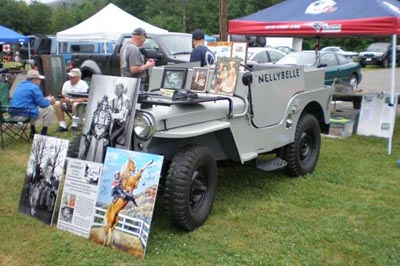 Luckily Nellybelle's new owner treated her well, and made her accessible to the public. She was photographed in June 2011 on display at the Great Willys Picnic in Pennsylvania, by Bob Westerman. 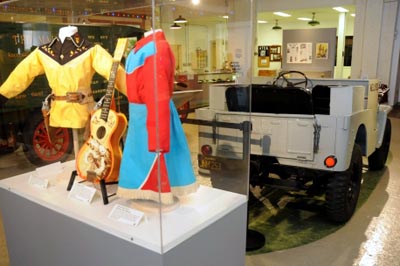 She was also featured in an exhibit in 2013 at the Boyertown Museum of Historic Vehicles in Boyertown, PA. (Photo by Harold Hoch, courtesy of the Reading Eagle.) 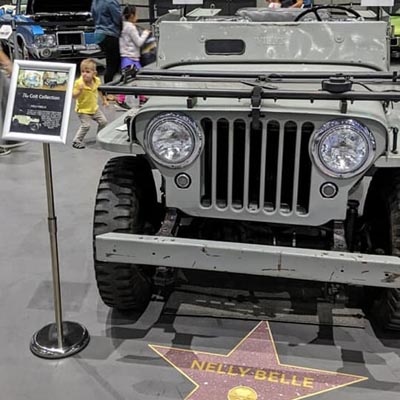 Nellybelle was sold again in November 2018 by Julien's Auctions (for $38,400) in the same auction as Marilyn Monroe's 1956 Thunderbird ($490,000). In early 2019 the Jeep was exhibited at the San Diego International Auto Show with a placard (210K JPEG) indicating she was now part of the Coit Collection. Photo courtesy Joey Bryant. 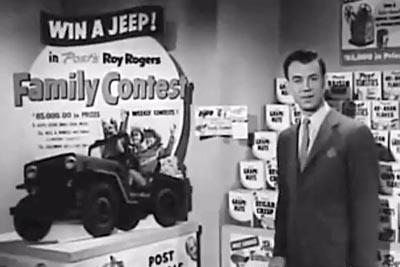 A contest advertised in the June 1, 1954 issue of Look magazine (see Win a Willys Jeep) indicates that Roy and Willys (and Post Cereals) had made some kind of arrangement to promote the new Willys CJ-3B. But in response to a question from CJ3B.info in March 2003, Roy Rogers Jr. said he is certain that his father used only the original 1946 Jeep on the television show. 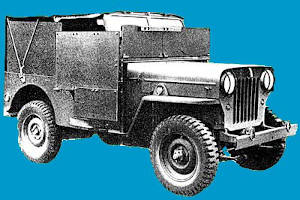 Roy Jr. says he is too young to know the details of the origin of his father's Jeep. The apparent armor plating around the front bears a strong similarity to the U.S. Army armor installation kit seen here. Steve Davis points out that according to the IMDB, Pat Brady was a tank crewman in World War II, so that may have influenced the decision to armor plate the Jeep.

It may have also been intended primarily to hide a stuntman crouching in the Jeep, for scenes where Nellybelle takes off on her own! 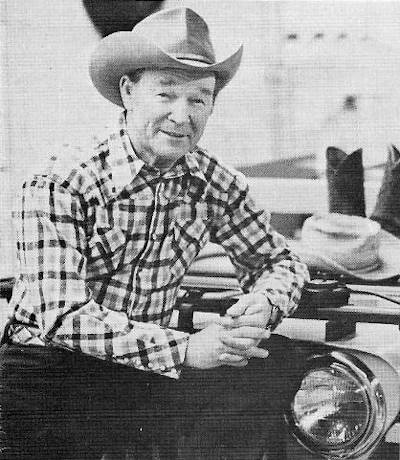 Roy Rogers Sr. (seen here at the Roy Rogers - Dale Evans Museum, with Nellybelle and the late Pat Brady's boots and hat) told magazine writer Scott Nelson in the 1970s, "I rigged the Jeep up myself. I made the doors of hard airplane aluminum. All my kids learned to drive on Nellybelle, out on the ranch.

"I rigged it up with dual wheels on front and rear, and you put that baby down in 'grandma' and 4-wheel drive and you could go up the side of a wall practically -- I still got 'em." 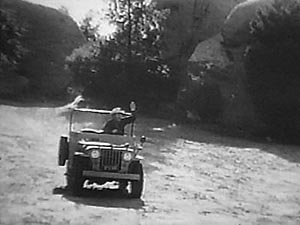 The "Bad Company" episode seen here is from 1954, and finds Nellybelle as usual in some kind of disrepair -- this time it's her brakes. 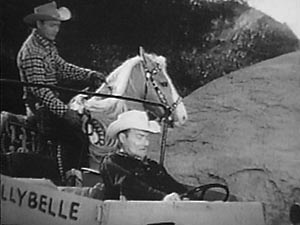 After waving to Roy, Pat has difficulty stopping to chat. See also a shot from behind (30K JPEG) which shows Nellybelle's rear end details.

Roy Jr. says the Jeep was painted grey so she would appear a consistent shade in the black & white film used for the show. 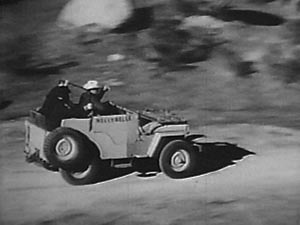 In this episode, the bad guys who have stolen the box of gold produced by the gold mine, kidnap both Dale Evans ("Queen of the West") and Nellybelle during their getaway.

After everybody is rescued, Pat drives two of the villains back down to town in handcuffs. 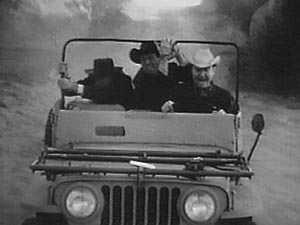 But of course he loses his brakes again, and Nellybelle ends up upended (30K JPEG), in the brush. 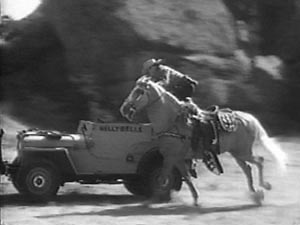 "Hard Luck Story," a 1954 episode about an insurance scam, begins with another wild stunt in which Nellybelle starts rolling down a hill by herself, and Roy chases her on Trigger and leaps from his saddle into the Jeep to bring her to a safe stop.

Dale says, "Roy, you shouldn't have taken a chance like that for Nellybelle!" But Roy replies "Well, she's part of the family, Dale." 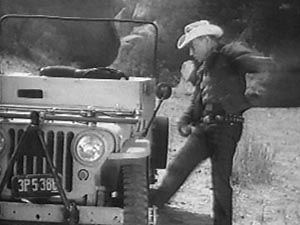 Later, Nellybelle is suffering from engine problems. At one point Pat refers to her as a "moving junkpile!" and at another point he has to resort to kicking a tire to get her started. Hear it in QuickTime audio: 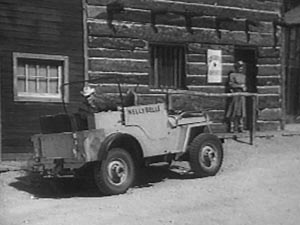 Outside a jail where Roy is being mistakenly held, Pat has to get Nellybelle to backfire to cover up the sound of Dale shooting the lock off the jail door to rescue Roy. Hear it in QuickTime audio:

Note some differences from the other 1954 episode -- the spare tire is gone, and a front tow bar and the four dual-wheel adapters have been added. 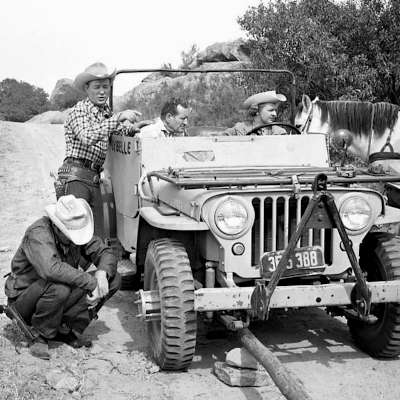 The Jeep is set up in the same way in this production still, date unknown. I guess if you're not carrying a spare, you don't really need a jack on board either. Nobody looks too happy as Pat contemplates the problem.

See also a photo of Roy and Dale in what is probably the same Jeep, with the armor removed but with duallies on the rear (70K JPEG).

Nellybelle was one of the great television vehicles. Her popularity was cemented by a number of toy Jeeps and playsets that were sold during the years The Roy Rogers Show aired, and even for some time after.

See The CJ-3B in the Movies for more Jeeps on the silver screen.