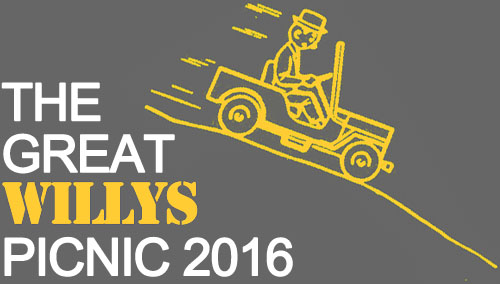 My first visit to the Great Willys Picnic was the 17th annual edition, held on Sunday, 12 June 2016 in Kempton, Pennsylvania. It was a good year for me and Roseanna to make it, because there was an excellent showing of five CJ-3Bs. The Picnic is an old-fashioned, informal event, which does not require advance registration. You just show up on the day, and if you're bringing a Jeep, you register at the gate to be eligible for a trophy or door prize. -- Derek Redmond

CJ3B.info has also published photos from the 2012 Picnic and the 2014 Picnic. 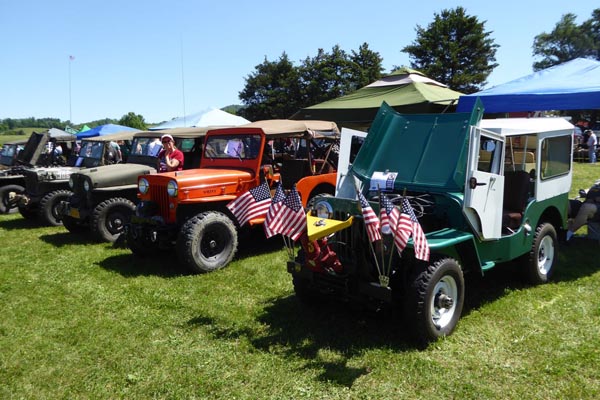 Just inside the main entrance, Bill Wise's '61 decked out with flags caught my eye, and right beside it was Seth King's orange '53, and Bob Westerman's X98. 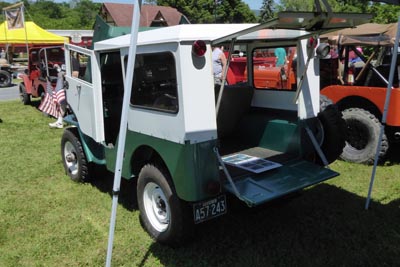 Bill's Jeep really reminded me of my '59

-- same Fountain Green paint, and a white hardtop very similar to the one I sold. He also has a snowplow very similar to mine, but with a winch neatly squeezed in behind the snowplow pump (180K JPEG), with a custom bumper. 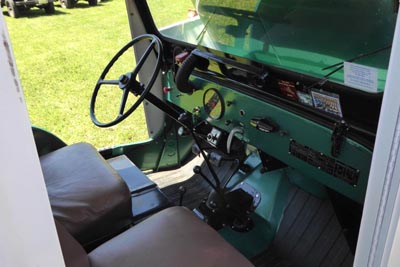 Bill is a big guy, so he moved the driver's seat back. For snowplowing, the fresh air heater and defroster are a great feature I wish my Jeep had. 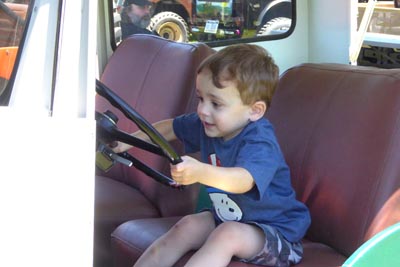 This future Jeeper found that the seat was maybe too far back! 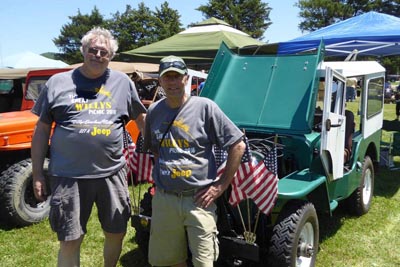 Bill Wise and Bob Westerman posed for a photo in front of Bill's 3B. See also the Jeep with the hood down (210K JPEG). 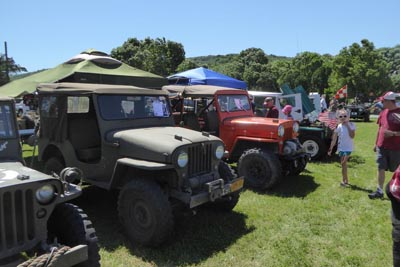 Bob's clone of the Willys prototype X98 was sitting between Jeff Petrowich's MB and Seth King's 3B without any explanation, so some people who hadn't seen Legendary X98 Brought to Life on CJ3B.info, were exchanging puzzled looks about the unique bodywork on the '53 CJ-3B. 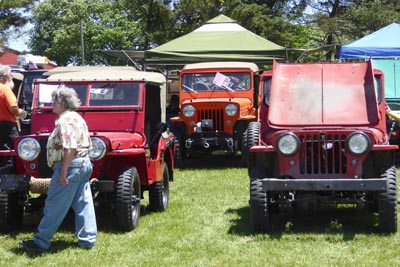 This view of Seth's 3B seen between a 2A and 3A, makes a pretty good illustration of the evolution of the flatfender Jeep from 1946-53. 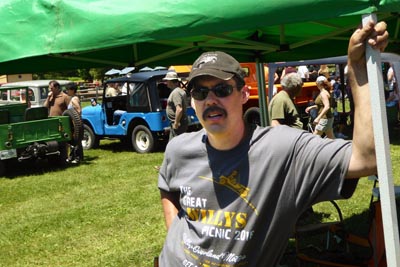 Seth was busy looking after all the details involved in running the friendly event. He seemed pretty pleased with the showing of 87 vehicles, the most in the history of the Great Willys Picnic. And the weather was perfect, except for some gusts of wind that threatened to blow away canopies and signs. 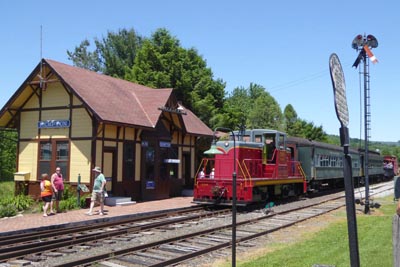 Seth was instrumental in bringing the Picnic to the grounds of the Wanamaker, Kempton & Southern Railroad a few years ago. The park is a great spot for a picnic, and if you want a break from the sun and the Jeeps, you can take a train ride for $10. 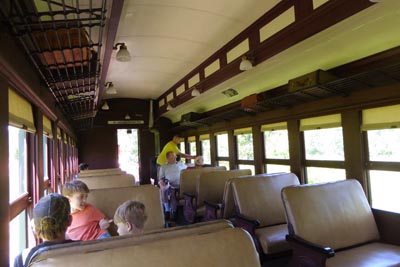 The scenic railway's restored passenger cars will carry you along a creek, through farmland and two small towns, over a bridge, and back to the 1950s. 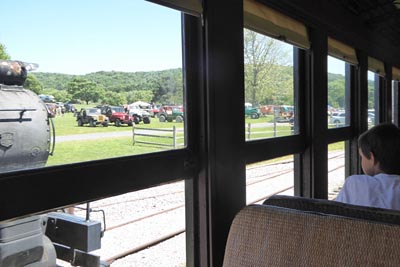 Looking out of the coach's windows and seeing Willys Jeeps and the steam engines (260K JPEG) the railway is hoping to restore, is as close to a time machine as you're ever likely to find. 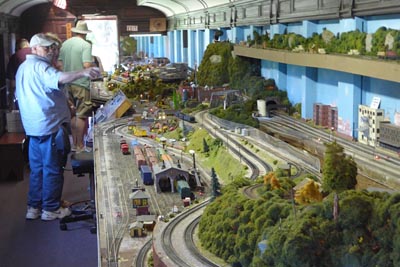 Another time machine is the model railroad layout in the coach parked behind the station, which gives you a bird's eye view of the railway in its heyday as the Schuylkill & Lehigh branch of the Reading Railroad. 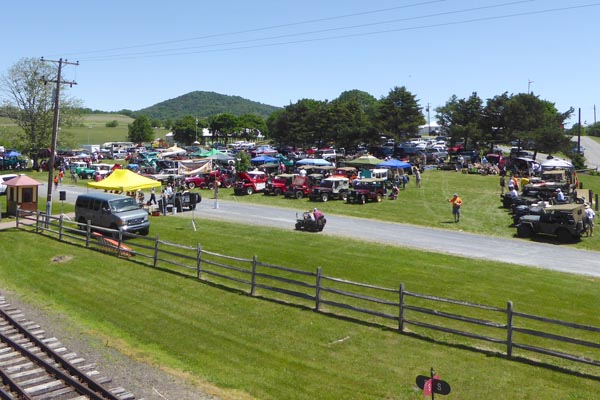 I wanted the same bird's eye view of the Willys Picnic, but I couldn't find the right spot. Jeff Petrowich volunteered to climb onto the roof of the Reading caboose to get this shot.

If you have a big monitor, see the large copy of the photo (300K JPEG).

Roseanna grabbed this photo of some unidentified guys fooling around with the ladder. 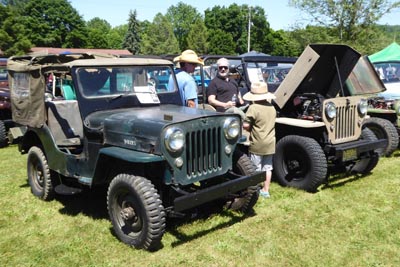 Meanwhile, Michael Davis chatted with folks admiring his restored 1960 CJ-3B, which he had driven over from New Jersey via the back roads. He was parked next to Mervin Smith's very original '53, with its original Willys canvas top. 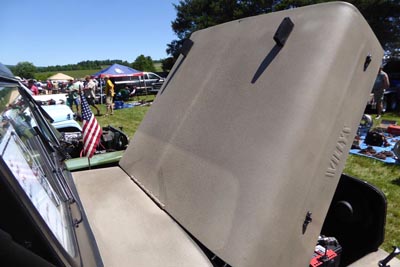 The sun was at the right angle to show Michael's textured tan paint -- see the large copy (190K JPEG) of this photo. 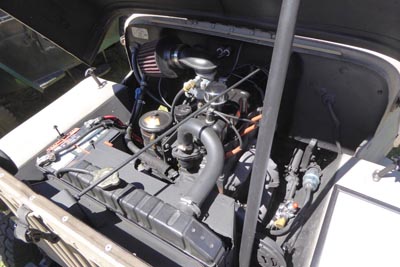 Under the hood, a very clean and functional F-head with modifications including Pertronix ignition and a Solex carb (plus a pressure regulator in the fuel line, on the driver's side fender, to lower the pressure going into the Solex.) 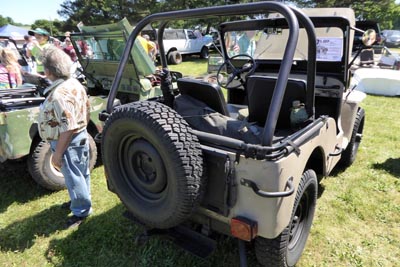 Practical modifications in the rear include rollbar, Bestop soft top, grab handles and LED taillights. The spare is mounted on the tailgate with an oak board backing, as per the Willys kit. Michael added some additional reinforcement -- see a photo inside the tailgate (190K JPEG). 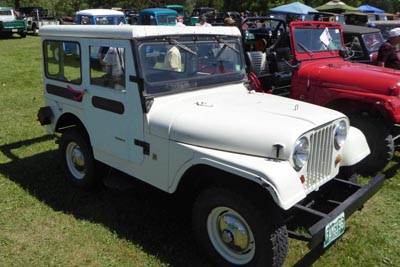 I also found a nice addition for the CJ3B.info page on Kelly All-Steel Jeep Cabs -- a CJ-5 wearing a Kelly "Bonanza II" top.

See a close shot of the interesting hinge arangement (110K JPEG) and the Kelly serial number tag (100K JPEG) mounted on the rear. 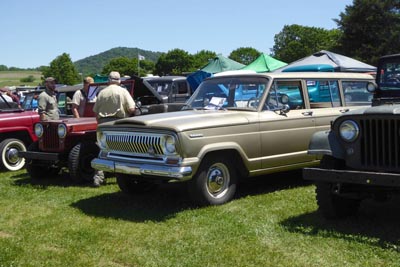 Other nice hardtops at the Picnic: Carl Walck's 1966 Wagoneer in Champagne Poly. 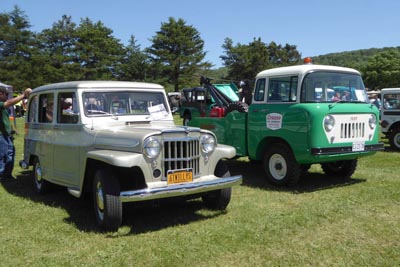 And Glenn Graham's 1961 6-226 Wagon in Amber Poly. Beside it is a snazzy Forward Control wrecker lettered for the Crouse Oil Company in Denton, Maryland, dealer for "Sinclair Dino Lube." 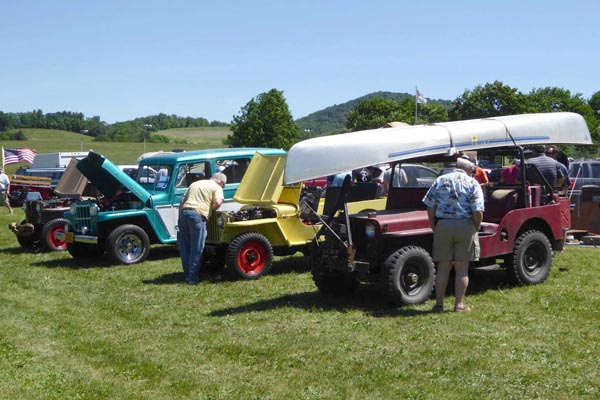 Of course I've only mentioned a few of the vehicles at this year's Picnic. As usual, I try to check out the 3B's, and also grab photos of a handful of others from the CJ-3B era. 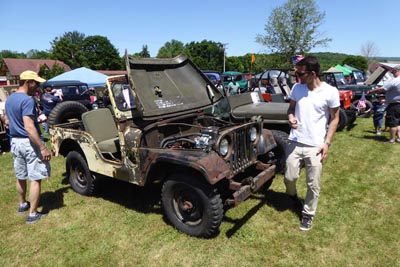 This was one that people were talking about, and it ended up winning the people's choice trophy as best modified Willys. Walter Hurd's 1955 M38A1 at first glance looked like a well-used example suitable for restoration. 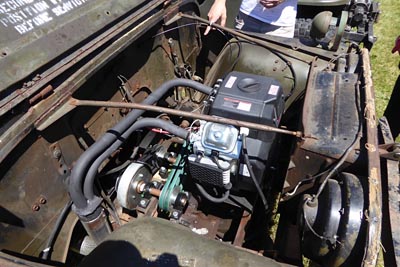 But under the hood was a 22-horsepower Kohler lawn tractor engine. I'm sure he had a reason for doing this, but I didn't find out what it was. I heard that the top speed for this Jeep was also about 22 (MPH). 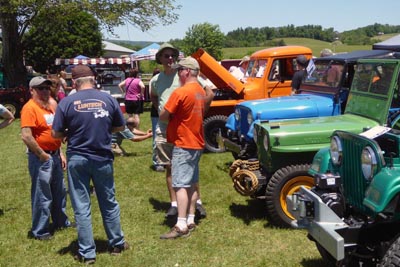 The chance to talk with old and new friends, like these guys enjoying the sunny day, is of course one of the big attractions of the Picnic.

I ran into more CJ-3B owners than maybe ever before in a single day. In addition to reconnecting with Bob and meeting Michael, Bill and Seth and seeing their Jeeps, I met Don Norris from North Carolina, a longtime contributor to CJ3B.info, who like me was just passing through. 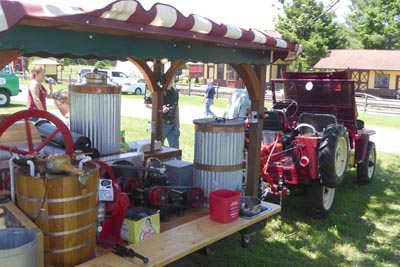 To cool off, the root beer floats from the ice cream stand powered by J.B. Stolzfus' 1948 CJ-2A were perfect. If you haven't seen this system in operation, check out the large copy of the photo (200K JPEG). 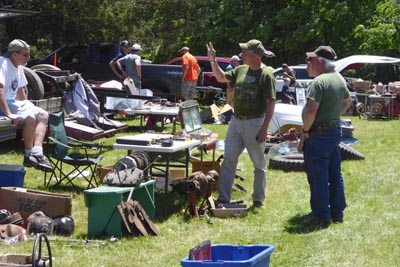 Ice cream was not the only thing for sale. Negotiations were going on at a whole lineup of parts vendor tables. 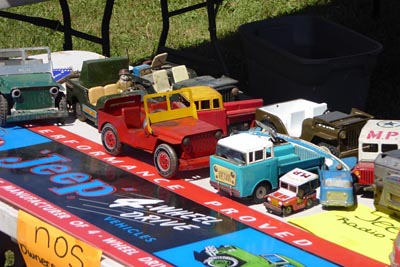 I always like to see if there's anything I should be getting photos of, for the Toy Jeeps Pages. This table had a couple of big Marx Jeeps, along with an Army Tonka and a good selection of tinplate including some FC's. 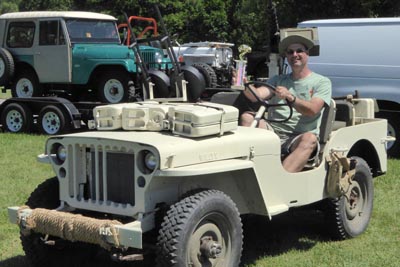 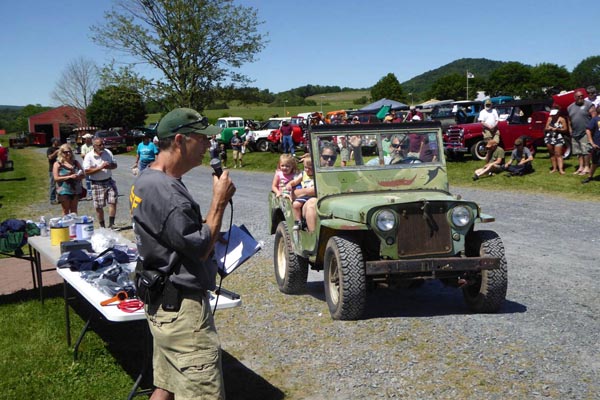 The day was a wonderful family event, but some of the kids were ready to go home before Bob Westerman finished presenting the trophies and door prizes.

Thanks to all the volunteers who made the Picnic happen. -- Derek Redmond