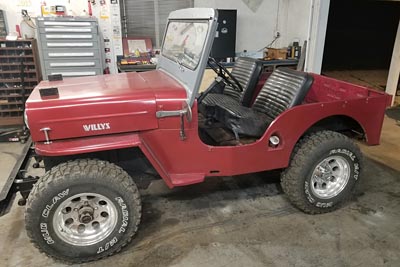 Bryan in Missouri wrote in early 2018 to say he had bought this as a '64. However, the serial number indicates it was built in the '62 model year, and it was not unusual for Willys dealers to update the titles on unsold vehicles.

Bryan also says, "It has very low mileage, around 8,400 to be exact, and shows signs of having a fire department type tank or pump in the bed. I just completed installation of the Rancho 2.5" lift springs and new shocks, as the springs were 'flat' and it rode like a log wagon. The rear springs also suggest that a water tank had been present, since additional, thicker leaves had been added at some point. The original springs were flattened to the point that a 2.5" lift only netted me 1" of additional ride height. 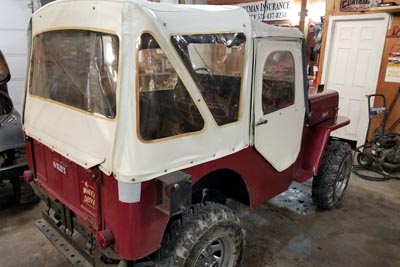 "The body shows serial number 57348 87686 and it showed up in CJ3B.info as previously owned by Jim Kehoe in Vermont (70K JPEG). This makes sense, as I went to Indiana to get it, and the seller there claimed he had purchased it in Vermont. It has a heater, new carburetor, new brake system, nice tight Ross steering with mostly new parts there, and a new factory style exhaust. It has very little rust, runs great, and joins my all original 1979 CJ-5 with 36,000 miles and my highly modified 1966 CJ-6. I do have 5 original 16" wheels and I'm debating about having them powdercoated and installing them with some modern 16" radial tires." 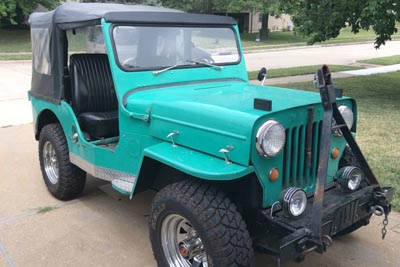 "My name is John G Herman, and I live in Wentzville MO, near St. Louis. In July 2017 I purchased a 1962 CJ-3B from a gentleman in Fenton MO. According to him it was owned/shared by four men (one of which was the man I bought it from) who kept it at one of the owners' homes in Colorado and used it for hunting. Two died and the man where the Jeep was kept bought a 4WD pickup and had no room for the Jeep. The Fenton man brought it home from a hunting trip and had it transferred to him.

"The Jeep seems to have been professionally maintained and runs well. I'm not very familiar with CJs -- I have an MB and some M38A1's -- but I suspect the tub may not be original. The front fenders are fiberglass. 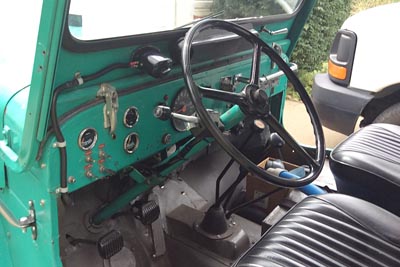 Left of the latch is a voltmeter. Right is a fuel gauge -- the original is disconnected. Someone added a homemade auxiliary gas tank under the passenger seat with a nicely made filler port. The switch labeled 'tank' switches to read the left tank or the right tank. While this seems to work, accuracy is questionable.

Below the fuel gauge is an oil pressure gauge. Switch labeled 'fuel' is to an auxiliary electric pump mounted under the hood (220K JPEG) on the driver's side fender. Not connected but with hoses and clamps ready to add inline... just in case? The small silver button is the horn. Lower left light switch is for auxiliary headlights. Right switch with black turns on the back-up lights.

Beyond the steering wheel in the photo you can see a Mico parking brake (www.mico.com). Three black knobs are lights, choke and throttle. Small green light near latch comes on with the ignition. Small red light by speedometer doesn't seem to work though after reading about the Mico brake I think it may be a pressure warning. Haven't looked under dash to see. Finally, just below the Mico brake is a toggle switch that turns on the heater fan.

Just beyond the turn signal on the dash, it's hard to see, is an angled indent where I would expect to see the mechanical brake handle. No hole, no handle, no brake on the transfer case. Removed? Also, look at the master brake cover. Three self-drilling screws holding it on, no factory holes. No spare tire holder holes on body. No top bow brackets. Is this an aftermarket body? If so, it's not recent as the hat channels are rusted away. Maybe wrecked and replaced? 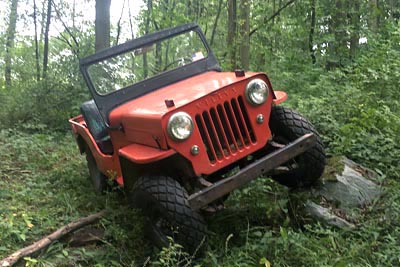 "My name is Michael Fries and I am located in Fennville, Michigan. I am the second owner of this 1962 CJ-3B. While this Willys is not the nicest I've ever owned, there is another neat aspect of this story that makes this Jeep priceless to me. The father of the man who owned this Jeep and my great grandfather actually worked together in the same steel mill in Chicago in early 1900s and both moved here to Fennville without knowing that the other was doing the same. It's pretty remarkable that I got the chance to buy this Willys and bring some life back to it." 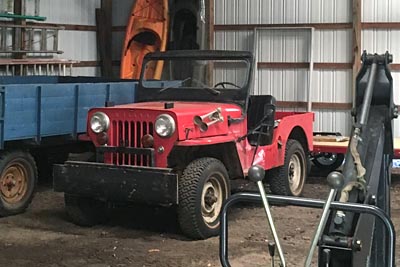 "This picture shows the condition the Willys was in when I bought it. The story goes that the original owner purchased it brand new off the lot in 1962 and used it until he moved into a assisted care facility a few years ago. This man used the Jeep in the winter time to plow snow and jump start dead vehicles, and it was equipped with a white, half soft top and optional fresh air heater." 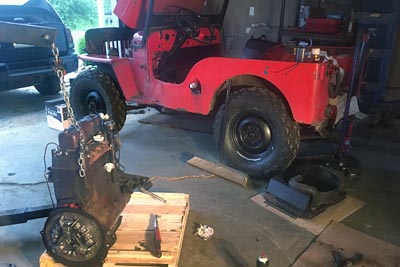 "As a result of its years of winter service, the body is fairly rough, but with a little mechanical work I have it running again and enjoy every minute of it! The vehicle serial number is 57348 89181 and the engine serial number is 4J318970." 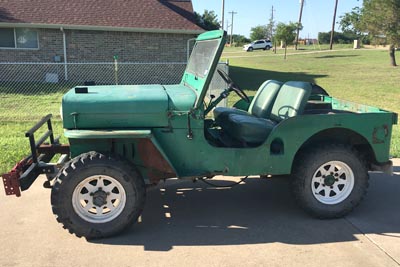 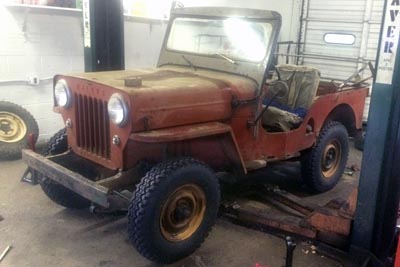 This very original 3B has been owned, since it was new, by Kirby Silverton in Bucks County PA. The paint is Redwood Metallic (180). Trim: grey seats (164). See the VIN and paint tags (210K JPEG). Purchased from Mac Motors in Willow Grove PA in 1964. (They still exist as an AM General parts dealer.) Dealership tag is still on the rear quarter panel. 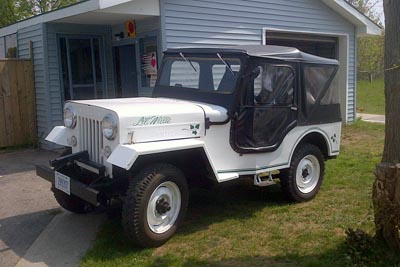 "Just purchased a CJ-3B. Love CJ3B.info! Unbelievably helpful. One of the best sites I've ever found on the internet."

"Ownership has it titled as a 1961 Willys CJ-3B (VIN 57348 86199 actually indicates 1962.) I purchased this Jeep in Port Elgin ON Canada -- don't know much about the history except that for the last 20 years it hasn't been used much. Someone spent a lot fixing up the body, but the front fenders are wrong, they look like they are off a Mitsubishi CJ-3B -- will be looking to correct that." 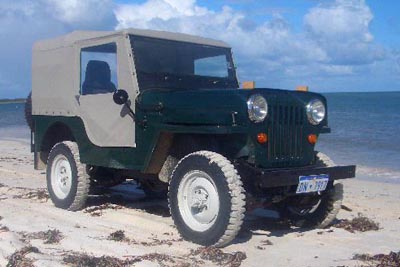 "Regards from Perth, Western Australia (most isolated city in the world.) My father's jeep (90K JPEG) from about 1969 until 2010 was a CJ-3A -- it is how my Jeep enthusiasm started. It was given to me in 1984 and I proceeded to tear it down and restore it at age 14. Dad had only done about 2000 miles in 35 years, mostly if not all in the early 70's. It was on blocks in the shed for many years and we finished her in 2000 after a long wait for a good body builder, cousin Terry. Anyway, unfortunately he was forced to sell it a couple of years ago. 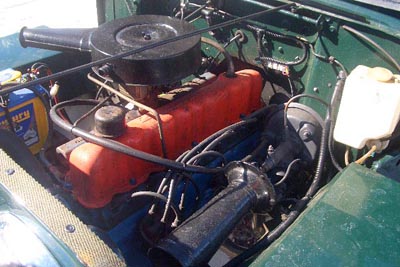 "That's when I built up my own Jeep that was sourced from a guy some 3000km away in northern New South Wales. The PO got the Jeep from his grandfather who imported nine during the 60's or 70's as he had a contact in the USA. This Jeep had been sold to a close friend of the grandfather and upon illness it was again in his possesion, so he promised it to the PO who saw it pull a bogged tractor out of a dam and was sold on it. It was used to go from Orange to Hamilton Island. Being young and maybe lack of coin, he sold it to me. He helped me a lot to get it together to truck west, and I promised him it will be in good hands -- thanks, Ben. 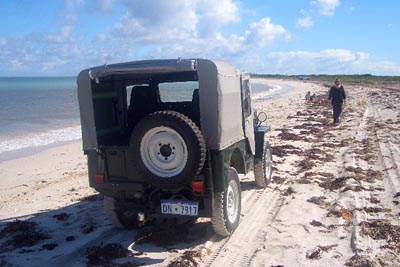 "I proceeded to strip and restore it for use up the coast as a beachcomber and sandhill rig. I ended up going full on with a sweet licenced Willys, and my kids and wife love it. The Jeep runs right hand drive (40K JPEG) with a Ford 3.6 (221 cu.in.) 6 cylinder with an overdrive, which was a common conversion in Australia.

"Steering upgrades, power boosted brakes, seat belts and bucket seats, re-did the axle seals and slave cylinders and master cyl, 12-volt wiring and lighting. I built it up over 9 months and did all the work myself other than the PO doing the panel and paint, thank God. Being in the trimming trade, all canvas work (80K JPEG) was done at home. Thanks to CJ3B.info for a lot of help." 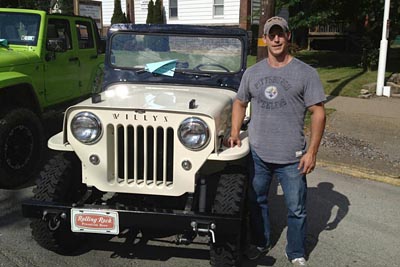 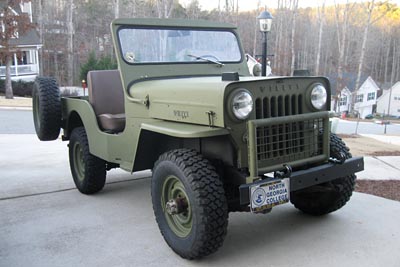 "My name is Donnie Bennett and I live in Demorest GA. My 1962 CJ3B once belonged to a grading company when it was thrown in to sweeten a deal for a used bulldozer. The guy took the deal and brought the CJ to my uncle, his best friend and master mechanic, to fix. He wanted it reliable enough to haul his dogs around and go to the local post office. My uncle and I were already working on my '47 CJ-2A at the time and had so much fun getting into both Willys over a Christmas and a Spring Break. When my uncle passed away I hit the guy up for the Willys, if he ever wanted to sell it. Seven years later, I now own it and could not be more pleased with it. 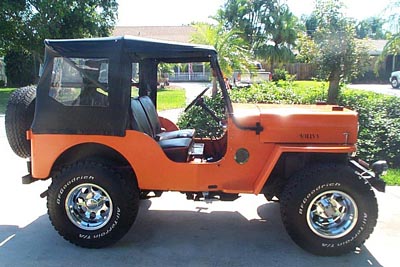 "Serial number 5734887814 is our second 3B, and we got it for our summer place up in the mountains of North Carolina. I originally made the yellow '63 to take up there, but the wife said we use it a lot down here and I should find another one for up there -- love that woman. I found a rust-free example out in Las Vegas and had it shipped down here. Must have been a desert vehicle all its life -- can you imagine working on something this old and having nuts and bolts that actually come apart? It is about rust free, with the only rust being two spots alongside the tail lights that were caused by a stiffening bracket inside the body that looks like it was designed to hold dirt. 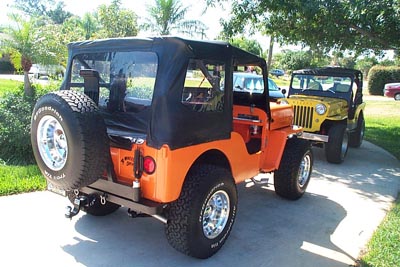 "I built a swingaway spare bracket (120K JPEG) so I could still use the tailgate (120K JPEG). The trick was to find a bearing strong enough to support it, but it had to be cheap. I ended up using a stub axle and spindle off a trailer. Just cut off the bolt flange -- worked perfect for like 20 bucks." 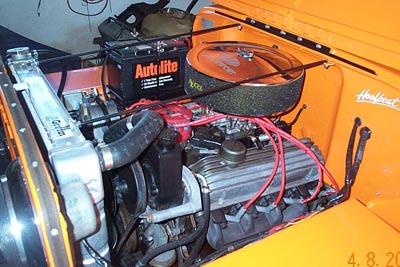 "It already had a 289 Ford (130K JPEG) installed in it, so it was a matter of rebuilding about everything, installing a overdrive because of the 538's, disk brakes, power steering, a gasoline heater, paint job and it was ready to go."