The first Willys Jeep factory in Canada was opened in 1959, although Ford Canada had previously built military Jeeps under an agreement with Willys and the Canadian military. According to Canadian author David Dunlop, 2,140 M38 CDN Jeeps were built by Ford in 1952, and over 1,000 M38A1s in 1953.

Alex Houle found this announcement in the Windsor, Ontario Daily Star, 16 July 1959. Windsor (right across the river from Detroit) was an automobile town, and when Kaiser/Willys announced they were going to expand their existing assembly/distribution plant and start building Jeeps here from scratch, it was big news -- bigger than Berlin, Khruschev, Scotland Yard or Canadian politics. The newspaper announced that the first vehicle was expected to come off the assembly line in August, with forty percent of its parts originating in Canada. Plans were for production of 1,000 vehicles per year, beginning with the "open-type jeep", which sold at the time in Canada for $2,200.

At the bottom of the front page was a photo of the already existing Willys facility, which was located between the two sites where the Chrysler mini-van and truck plants would later be established.

According to Cars in Canada byHugh Durnford and Glenn Baechler (McClelland and Stewart, 1973) Willys moved their Canadian headquarters to Windsor in 1934, where they remained even after the entire Willys organization was taken over by Kaiser in 1953. Kaiser Jeep of Canada Limited, as it came to be called, started assembling Jeeps in Windsor in 1954.

This 1956 Canadian advertisement strangely does not include the CJ-3B, although it does include some pretty specialized vehicles. 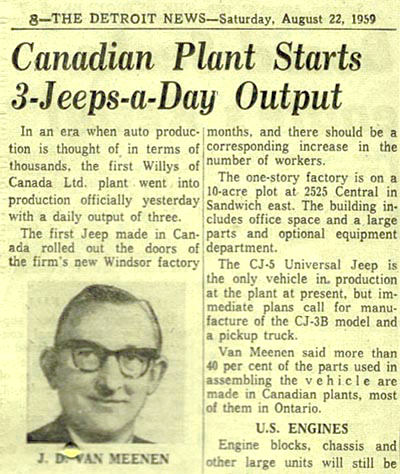 Bill Norris found this somewhat lower-key announcement in the Detroit News when the plant began production in August. Three Jeeps a day! The article reports 14 employees at the plant, which conflicts with Joe Donnelly's recollection of 60 (see below.) It does quote factory manager J.D. Van Meenen as predicting a doubling of employees and production over the next two months, as the plant adds the CJ-3B and pickup truck to the currently-produced CJ-5.

The article also mentions that Willys has plans for a plant in the UK. (According to Bill Munro's Jeep: From Bantam to Wrangler, Willys had unsuccessful negotiations during 1958-59 regarding an association with Land Rover in Britain.)

Working at Willys in Windsor

Joe Donnelly of Windsor worked in assembling, welding and maintenance at the factory for the full ten years it was open, and was kind enough to send these recollections:

"Well, I have to really get my thinking cap on now because I am 74 years old and it was 1969 when the plant closed in Windsor. My Jeep career started when they opened the door and ended when they closed the door.

"The plant was already there before we decided to manufacture Jeeps and was a parts depot facility. All the employees were asked to join in on the assembly part of it but few did, so new hires were added in 1959.The plant mushroomed from 6 employees to about 60 when we officially ran the first Jeep off the line on August 21, 1959. 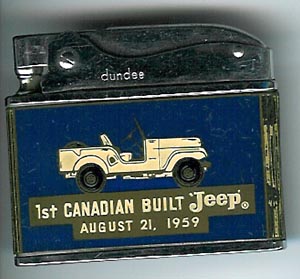 "I remember that day when all the Government Officials were there to officially open the plant. Paul Martin Sr. and a host of other local officials making for a gala official presentation. We were all answering questions and socializing, dressed up in white long shop coats, looking good. Ha Ha.

"My job was assembler and welder for the first few years then because of my background in the trades I applied for and received the Maintenance job looking after all the production facilities and the plant in general. This included all the maintenance, welding and whatever they needed within my qualification range. We made all our own paint dip tanks and hangers, and even built a series of jigs and fixtures that was required for a government contract to produce military vehicles in the 4-speed 4-wheel drive units. 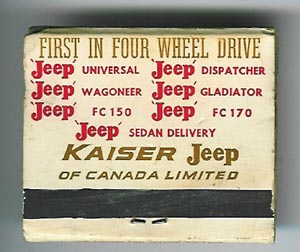 "The history of production started with the CJ-5 Jeep which we produced until we got really into it, and then a few other models were added. We added the CJ-3B, CJ-6, FC150 and the FC170, then came the Jeep Wagoneer. Under the supervision of Mr. Frank W. Freel we also began making a small, boxy-looking cap for the Jeeps, which was cut out, welded and installed by us there in our machine shop facility. Mind you the production was very low at the time and we were lucky to produce 5 CJ-5s a day. The larger models took more time so they were balanced out in the day's load.

"We only had use of a few engines, one an overhead valve 4-cylinder and a flat head 4-cylinder used in the smaller series of CJ-3 Jeeps. The later model Wagoneer Jeep line used a straight six engine made by General Motors for us. It used a single camshaft with common lobes for both intake and exhaust valves.

"The production facilities were meager, with assembly stations on wheels located throughout the plant to coordinate the various assemblies. There was a frame assembly, front end assembly, engine assembly, body-in-white assembly and paint, and final assembly before it all went out the door. We had a small one-vehicle paint booth and a drying oven of heat lamps to bake the paint, which moved on a track past the body shells.

"We belonged to Local 195 UAW, and were covered by a contract for the full time of our production experience from day one. This was before the CAW was formed by breaking away from the UAW. Wages then were about $3.50 per hour average, and of course I made about 10% more due to the Maintenance classification." -- Joe Donnelly

In 1963 there were news reports of an expansion in the work force to about 80 employees, when the plant moved into the production of Wagoneers and Gladiator trucks using welded bodies imported from the U.S. According to the Windsor Daily Star, the plant had been producing four "standard Jeeps" daily. Sixteen different models had been built, including some two-wheel-drive Dispatchers. About five percent of production was for export to other British Commonwealth countries. 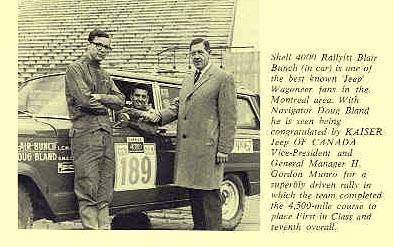 Hugh Munro told CJ3B.info in 2010, "I'm the son of the last G.M. of Kaiser Jeep of Canada, H. Gordon Munro. Dad was a Scot who worked for Rolls Royce then Rover in the UK. After the war the Wilkes brothers sent him to North America to launch the Rover/Land Rover brand. Years later he parlayed his experience marketing Land Rovers into the role of leading the Kaiser Jeep Corporation in Canada."

Hugh said, "It was my dad who decided to press all the Jeeps into service during the great blizzard of 1965. I remember he didn't come home for days and the news was full of stories of Jeeps rescuing shut-ins and delivering essentials. We had a snowdrift in our driveway that was higher than the roof."

An article in the Daily Star (26 July 1969, see below) described the February 1965 snowstorm as "one of the brightest chapters in the company's history here... when Windsor was inundated by the worst blizzard in recent history. Four-wheel-drive Jeeps were about the only vehicles that could move through the deep snow and KJOC (Kaiser Jeep of Canada) set up an emergency centre in its plant, yanking Jeeps right off its assembly line and pressing them into emergency service." 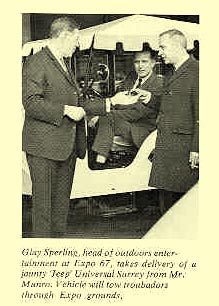 Hugh Munro also mentioned that his father "provided Jeeps as the official vehicle of Expo 67. I remember having 'front of line' type access to everything because Jeep was a major sponsor. I also remember the Sportsman's Shows at the Ex in Toronto, when the majority of the show was the car displays. The engineers from Toyota used to come over and examine the Jeeps, then at the end of the show they would buy the display vehicle and take it back to Japan. That's how they developed the Land Cruiser."

The photo at right shows H. Gordon Munro presenting a Surrey-style Jeep for use at Expo 67, the World's Fair in Montreal. These photos are from page 3 (150K JPEG) of Kaiser Canada's publication Jeep Parade (120K JPEG), issue no. 2 for 1967. The six-page magazine included the "Expo Tourist Delivery Plan" which offered Jeep buyers free airfare to the Montreal, where they would pick up their Jeep and visit Expo 67.

According to the Daily Star there was a 1967 contract worth $2,789,000 from the Canadian government, to build 800 military Jeeps for the Canadian Forces. These were probably M38A1 CDN models. One of the details of the 1959-69 production we have yet to uncover is how many other Jeeps were built for the military, and what models they were. Alex Houle's CJ-3B was apparently built in Windsor for the Canadian Navy in 1964. 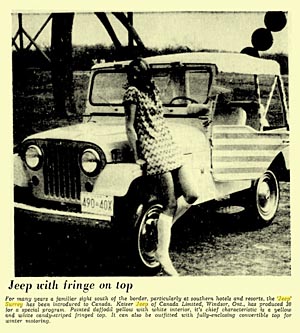 Bruce Agan spotted a picture and caption from the Saskatoon Star Phoenix of 17 June 1968: "For many years a familiar sight south of the border, particularly at southern hotels and resorts, the 'Jeep' Surrey has been introduced to Canada. Kaiser Jeep of Canada Limited, Windsor, Ont., has produced 30 for a special program. Painted daffodil yellow with white interior, its chief characteristic is a yellow and white candy-striped fringe top.It can also be outfitted with fully-enclosing convertible top for winter motoring."

Bruce comments that it looks like this was built on the two-wheel-drive DJ-5 platform, with full 'JEEP' wheel covers, rear spare, 60/40 seats up front, rear seat, and possibly the V6 badge on the cowl. Anybody seen one of these 30 yellow Surreys still surviving?

Production was going strong in 1969, when Kaiser announced that "due to the unfavorable economics of duplicating our U.S. production in Canada," it would discontinue Jeep production in Windsor almost exactly ten years after it had begun.

Employee Joe Donnelly recalls, "We had a 10-year stint in Windsor and the major reason we closed was because of the lack of environmental controls. We were being scanned by the EPA and our plant wasn't the cleanest. All of our cleaning solutions ran straight down the sewer and we had very little dust control from our paint booths. To update to the required scrubbers and filtration equipment would have been too costly, and the company as a whole wasn't doing that well so they folded and sold out to American Motors Corporation."

A newspaper article (right) from the Windsor Daily Star of 26 July 1969 (see a full copy, 50K GIF) describes the last 12 Jeeps to come off the Assembly line as "specially created Jeep 'Wheelies', wildly-painted fun machines that look more like oversize dune buggies." The photo of the "Mod" Jeep driven by business manager F.W. Freel shows a CJ-5 with a black stripe painted up the centre of the hood, similar to the Renegades of the early 1970's. (John Shows of Mississippi suspects his 1969 CJ-5 Made in Canada may be one of those last Jeeps off the line.)

Bob Morgan reported to CJ3B.info in 2008 that, "A fellow in Quesnel BC bought the last production Jeep CJ-5 made in Canada. The hood had all the production workers' signatures on the inside. His name is Tom Moore and he bought it from Cook Motors in Penticton BC in 1969. To my knowledge he still has the hood but the Jeep was totaled in an accident. I had driven the Jeep but was slow in purchasing it. The color was lime green, V6 with headers, 4 barrel carb, roll bar, bucket seats, and larger tires and wheels."

Thanks to Alex Houle, and John Doherty of the Windsor Public Library, for Windsor Star clippings. Thanks also to Hugh Munro, Joe Donnelly and Bruce Agan. -- Derek Redmond

By the way, American Motors later built a large number of Jeep CJ-7s and YJ's, for sale in the U.S. and Canada, at its plant in Brampton, Ontario.