Story of a Long-Box Willys, Part 2

See also Chapter One of the story of Dean Thiem's 1953 CJ-3B and its after-market body extension.

Chapter Two: She Sees the Light

Well, as you know I had disassembled the Jeep to inspect it, and the wife was not a happy camper. March found me in the garage deciding where to start. First let's back up to Minnesota. I forgot to tell you the Jeep had so much power the previous owner had welded 400 lbs. of cast iron across the frame between the front bumper and grille to act as weight to keep the front end on the ground. We took that off before we left Minnesota, or at least most of it.

When they put the Ford 302 in the Jeep they had also done some other cruel and unusual things to the front crossmember and frame. They cut the original front cross member out and had installed a piece of channel under the frame to take its place. Then they welded the steering bell crank to it, and cut away half of the channel to clear the radiator and steering, which left very little support. I decided to pull the grille and radiator to get a better look at how to repair the cross member. As it got further apart, the wife got more testy, but I assured her we could take it out next weekend. The next day she came up to the garage to find I had the grille and fenders off but couldn' t get myself to stop there. I had removed the seats, and all the wiring. All that was left was the tub so I decided to take that off also. Needless to say, I was in the doghouse and the Jeep didn' t see the light of day for almost a year. Yes, I am still married. 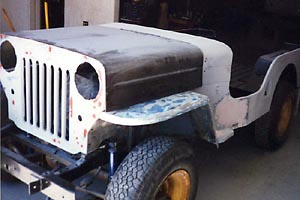 I inspected the body, and with the exception of some stress cracks in fenders and grille, and a small rust bubble by the taillights, the body was in great shape. That may be because of the seven coats of paint over the original dark green. The hardtop and doors were in good shape except for dents in the very top from a building collapsing on it. I found the original Koenig brass tag under several coats of paint. 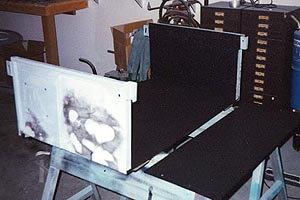 The body extension box was in great shape (with the exception of 30-40 holes drilled in it over the years for whatever reason.) I also found the original Koenig brass tag on it under much paint.

The frame only had one small crack in it, near the front cross member. Every nook and cranny of the frame was packed with sand and gravel, probably from it' s life in the Arizona Dessert. I wire brushed the entire frame and treated it with a rust conversion coating prior to spraying it with rubberized undercoating.

I decided to not believe everyone who told me that I needed to upgrade the brakes. Instead I rebuilt the entire system and installed new brakes shoes and flex lines. And I made another error when I decided not to replace the steering -- but more about that later. 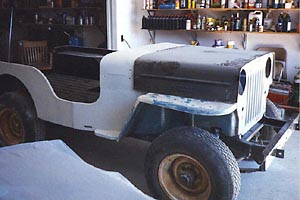 Next came the body tub. It seems that it's a requirement for a tub to have at least 50 holes drilled in it that serve no purpose but to amuse the guy that just got a new drill for Christmas. At this point I decided that a wire feed welder was going to be a requirement. Of course that meant I got one of those "boys and their toys" talks from the wife. It more than paid for itself on this project though. I welded up the small rust spots and all the non original holes. I wire brushed the underside of the body and treated it with rust conversion treatment and sprayed it with rubberized undercoating. I then made some body bushings out of rubber and reinstalled the body on the frame. This gave the wife a glimmer of hope that it would someday be a Jeep again.

One of the prior owners had tried to waterproof the hardtop-to-windshield seam. He didn't have much luck, and he welded the top to the windshield. So at this point, I needed a windshield frame as well as a hood. 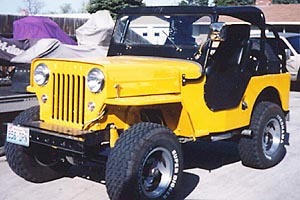 I went back to CJ3B.info and as luck would have it, Mike Heimbigner from Kennawick, Washington (only 200 miles from me) was liquifying some of his stash, which he had collected while doing a Jeep for his 16-year-old daughter (see the photo). Seeing this CJ-3A/3B helped my wife to understand what could be done with an old Jeep (see also more of Mike's Project Photos on CJ3B.info), and the issue of my dismembering the Jeep before camping season was put to bed at this point. Anyway, I purchased an original hood and a reproduction windshield frame from Mike. 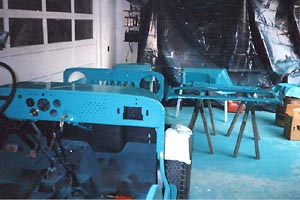 After some welding and straightening on the grille and fenders, we were ready for prep and paint. I sanded off most of the previous 6 or 7 coats of paint then had to decide on a color. I kept looking for a color I' ve never seen on a Jeep. Finally I decided on 1957 Chevy turquoise. Spraying the jeep went about like every paint job I've done. I was using acrylic enamel and put at least 1 run in every panel. I' ve been told that the color I painted it is the same color used on the Barbie toy Jeep. I refuse to believe it but have taken a lot of ribbing. My brother even sent a remote control Barbie Jeep to me for Christmas -- the dog loved it. 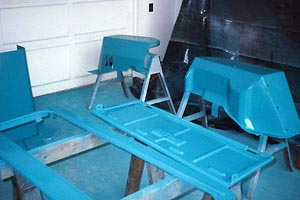 I sprayed the underside of the fenders and reinstalled the fenders and the grill. Then I hammered out the hardtop's dents as best I could and used some Bondo to fill some of the dents. I sprayed the inside with black rubberized undercoating. I decided that I wanted a Black glandular surface on the outside of the hardtop so I would not have to worry about messing up the paint job in the woods. Finally I decided on Herculiner bed liner paint, available at most auto parts stores. Several people told me I was insane, but minor details like that don't bother me, so I proceeded. It went on quite well with a roller. It sure is some tough stuff and has proven to be a very good choice.

Well, this is a good spot to end the chapter. Stay tuned for wiring and reassembly problems -- oh and a slight detour to enlarge the garage. -- Dean Thiem

Continue to Chapter Three of "Story of a Long-Box Willys."