Radical 3B's on the Rocks

Beyond the lavishly restored, totally original rig, there is another side to the world of CJ-3Bs. Purists would call it the "dark" side. Others are more appreciative. Like it or not, we all have to acknowledge the existence of it.

The world of the built-up CJ-3B has existed at least as long as the CJ-3B. There have always been the inveterate tinkerers out there, as well as the die-hard 'wheeler who likes that high-hood look but wants to eke that last measure of trail performance out of his machine. 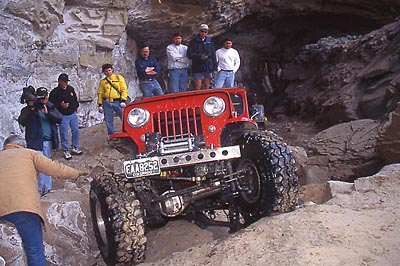 In the old days the modifications were limited by the available technology. And it was woefully insufficient by today's standards. The options today are virtually unlimited, at least... well... as long as your funds are virtually unlimited. Fortunately, the array of technology hanging on the tree of trail performance can be individually plucked to good effect. The end result is that there are CJ-3Bs today doing things that weren't even imagined when the '3B was born. Would Barney Roos approve?

This photo shows Nancy Bailey's '61 CJ-3B in Colorado. See more of her Jeep in action further down on this page.

The CJ-3B probably has the most buildup potential of all the "flatties." It's that high hood. Ironically, what makes it the "Ugly Duckling" of the Jeep world is what makes it the most adaptable to modifications. It's a lot easier to do the obligatory V8 or V6 swap in a '3B than it is in the other flatfenders. Still, you don't see as many "built" '3Bs as you do '2As or '3As. Purists have remarked that the 3B's ugliness is what has saved many of them from "a fate worse than death." Spoken like a true purist! For your enjoyment, I have tossed together a few built '3B shots and let Derek have his way with them on "The Page." These came from covering events over the past 10-15 years. Some are only dimly remembered and my apologies to their owners, and you, for the scant detail. Enjoy. 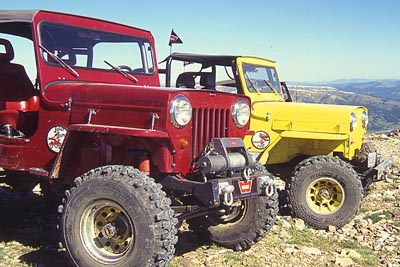 Here are Tom Telford's and Richard Imholt's heavily-modified 3B's parked at the top of Engineer Pass in Colorado's San Juan Mountains in 1998. Telford's (left) is actually a '59 DJ-5 frame with a Philippine aftermarket body. 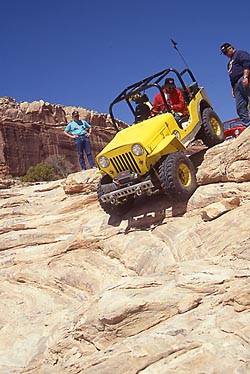 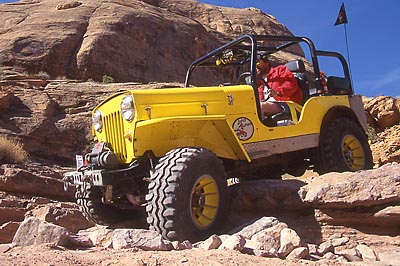 Richard Imholt's CJ-3B in another photo from Moab in the nineties. Lift was about 2-1/2 inches, and the Jeep mounted 33x12.50-15 Super Swampers on alloy wheels.

Richard's 3B with a beautiful background atop Engineer Pass (180K JPEG) is the September 2005 cover photo on CJ3B.info. 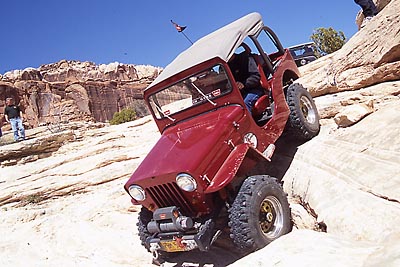 Tom Telford's "ersatz" CJ-3B is also descending Wipeout Hill. Telford's rig started out as a '59 CJ-5. In 1995, the following specs were listed: an aftermarket body powered by a '72 4-bolt main 350 Chevy with a T-18 manual trans mounted to a Dana 20 t-case. Both axles are narrowed, high-pinion Ford Dana 44s with 4.88 gears, Detroit Lockers and a rear Holbrook full-float conversion. The suspension is custom by the owner (Telford is an automotive engineer) with extra long springs (Wagoneer) mounted outboard of the chassis and reversed shackles up front for a lift of about 4 inches. Tires are 34x9.50 Super Swampers. The rig has a custom 25-gallon fuel tank under the seats, mounts leather Recaro seats, and a '76 Pontiac tilt steering column and Saginaw power steering conversion.

In the 1990's this Jeep also appeared in a magazine ad (40K JPEG) for Warn winches, and an article called "High Hood High Jinks" in 4WOR (see CJ-3B Magazine Articles.) 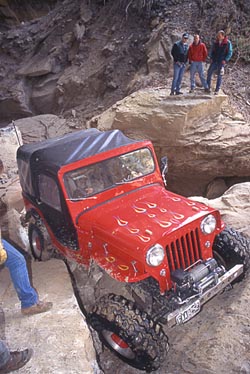 Nancy Bailey's '61 CJ-3B on Colorado's Notorious 21-Road. I don't have a lot of specific info on her Jeep, but I know it has a modified 225 V6 (see the badge, 50K JPEG) and a later model Jeep Dana 30 front axle (see a closer view, 120K JPEG). No doubt it's locked up at both ends. Nancy and her husband Jim are very well known hard-core four-wheelers and Jeepers. 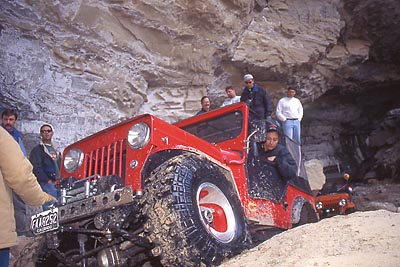 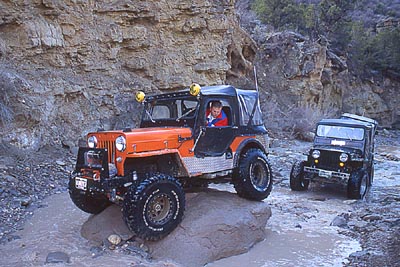 Finally, a real nice orange CJ-3B with Colorado plates that I have no info on. I have several pics of this rig in various locations over several years. Here it's shown posing on a boulder on 21 Road in Colorado. Anyone recognize this Jeep and its driver?

Peter Chandler in San Francisco doesn't know the driver but he recognizes the Jeep: "I bought it off eBay from Montrose, Colorado, and drove it home to the Bay Area from the Salt Lake City Airport. It was a long hot ride, but it did drive nice at 65 MPH. Even took it to "Hot August Nights" in Reno on the way home, and fit right in.

"Since that time it has run some of the worst/best trails in the Sierras, including such names as the Rubicon, Fordyce, and many others. It finally met its demise on the Barrett Lake trail, leaving it with a two piece frame. After welding it up on the trail, I drove it home and rewelded it so it could be driven for a little while until a replacement frame could be found.

"It now sits on a Matkins frame, high pinion 44 front waggy width, rear is a 60 high pinion full floating, ARB's, turning 37-inch tires. Long arms and coil-overs control the axle movement. The wheelbase has been stretched 13 inches, and I am looking for a section of a tub in order to lengthen the tub on my Willys 10 inches. Power is supplied by a Buick 350 to an SM420, then onto a hybrid trans case.

"There are many other changes being made. Granted this is no longer a 3B other than in its heart, but someone has to build a serious CJ-3B for rockcrawling.

"BTW, the whole reason I own my CJ-3B is because of CJ3B.info. I researched quite a bit looking for something rare, and after finding the website I realized I had never seen another one in the Bay Area. I now know where two dead ones are, and someone in a local rockcrawling club has one, but I still have not seen one driving down the road."

Thanks to Jim for the great photos, and Peter for the update on his Jeep. -- Derek Redmond

For other radical 3B's on CJ3B.info, see: