The Idaho Lakeview Mine

Jeep Stories From the Northwest, Part 1

CJ3B.info is pleased to present the first in a series of Jeep Stories From the Northwest by Rich Mylar. When you're finished this story, see The Idaho Lakeview Mine: More Photos for more of Rich's pictures from 1974 and 2005. -- Derek Redmond 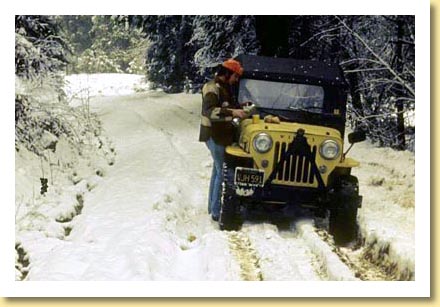 As I got out of the Jeep to turn the hubs in, my old friend Kevin turned the hub in on the right side and then looked up the snowmobile trail saying, "It looks pretty good, the snow is packed down tight and it's froze real hard."

It was late winter of 1974 and spring was not that far away. Kevin and I were headed into the ghost town named the "Idaho Lakeview Mine." I had talked to Carl -- he was one of oldtimers around Athol, Idaho -- and had learned a little bit about the old silver mine. It had been closed down at the beginning of WW2, never opening again. This old mine tucked way back in of the Couer d'Alene mountains even had a stamp mill, and there was a couple of houses and cabins for the mineworkers.

I eased the 3B onto the snowmobile trail after engaging the transfer case, and we slowly crawled our way up the north side of the mountain on the Bunco Road with the tire chains clicking a constant metallic tune on the packed down trail. The 3B just thumped and pounded along in second gear high range, without slipping a wheel. The north side of the mountain was heavily treed and the road was always in the shade, even during the hot summer months.

Kevin sipped his coffee and did not say much as we bounced and rumbled along listening to the gears whining, and then we finally crested the mountain. I pulled the 3B over and shut it down; we got out, taking in a wonderful snow-covered view of Lake Pend Oreille and the white covered mountain ranges to the north of us. The panoramic view revealed a dark grey ash-colored sky with threatening blue-grey clouds driven by a soft cold wind from the west.

We descended the south side of the mountain, pulled the 3B off the trail, and parked it. We fished the snowshoes out of the back, put on our packs, and headed for the log bridge over the creek at the bottom of Chloride Gulch. The snowmobile trail went on to Lakeview, a small spot of a village on Lake Pend Oreille that is always snowbound in the winter. 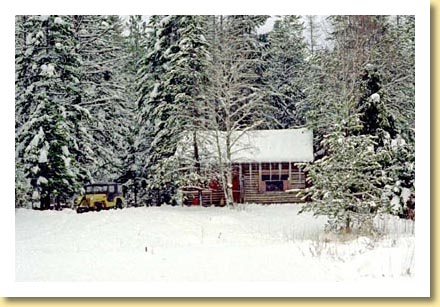 I found the Idaho Lakeview Mine about a year earlier when I first arrived from California; yes, I was a refugee from the rat race, and decided to do something about it. I rented a cabin for 60 bucks a month just off the Bunco Road. This log cabin had power, running water and new carpet. The most important point was my new bride liked this little cabin hidden in the woods.

The mine was around 20 miles from the cabin and gas was cheap back then. Kevin and I had made it to the bridge on our way into the mine. The old log bridge over the creek had collapsed years earlier. If we had taken our snowshoes off, we would break through the crust and sink up our belt buckles. The 3B always crawled in and out of this gully to the other side without slipping a wheel during the good weather, but now there was far too much snow to even think of bringing the 3B back here. 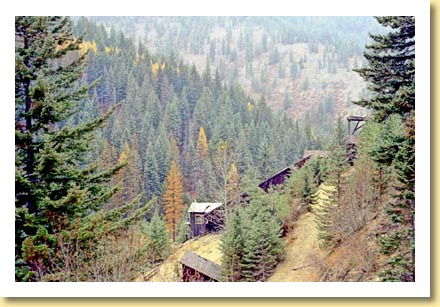 Normally during good weather, I could drive my Jeep right to the door of the stamp mill. There was row after row of core drill samples in wood trays. Some of the glass windowpanes were still intact and some were broken and missing. The rusted galvanized metal roof of the stamp mill had withstood many years in the weather and the wind was still tugging at the loose edges of the roof. The steel ore car tracks from the mine tunnel went straight to the stamp mill where the ore was crushed.

Kevin and I explored the stamp mill and all the surrounding houses. The pack rats had moved in much earlier and had been busy building nests everywhere; everything stunk of rat urine as we snooped thorough the decaying buildings. We had already explored the tunnel while on an earlier elk hunting trip. The tunnel was a scary place, even with my good Coleman lantern hissing to me, "Come on inside." I had looked the decaying wood tunnel shoring over carefully as I advanced down the tunnel, hoping nothing goes haywire on us. 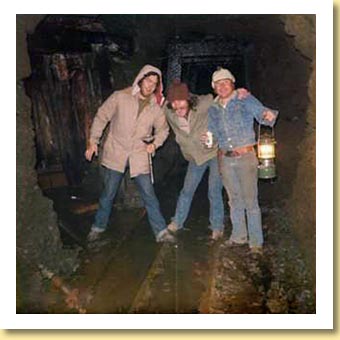 Kevin has always been an adventuresome friend and good partner; mining tunnels never did scare him much anyway. I can still feel the cold water in the tunnel leaking into my boots through the seams as we sloshed down the tunnel with the lantern. This tunnel exploration is not the brightest of things to do; all I can say is that was life back then and the way we did things. We were very lucky and got away with it.

A few years later, a few people died in an abandoned mine over by the Lake. They walked into an unseen gas pocket and suffocated. Kevin and I had also explored that mine years earlier. I am inclined to think that God takes care of fools, small children and occasionally a reckless Jeep owner who took a long time to learn the limits of his vehicle. 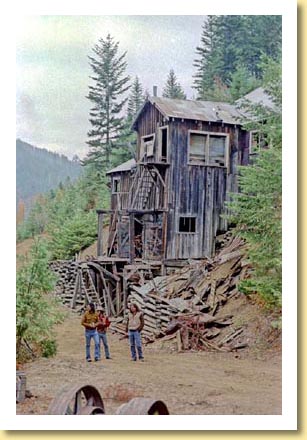 We looked around all the old well-weathered buildings one at a time and discussed the people that lived there during the good times when the mine was in operation. This small community was most certainly snowbound during the winter. The houses and cabins had no running water or electrical power. I could easily imagine cabin fever having set in on the people who lived here during the long cold lonely winter months.

A steep rocky gully separated the stamp mill and mine portal from the houses and cabins. A few old abandoned cars from the late 1920's and early 1930's that no longer had any value had been pushed into the gully to rust away. There was one snow-covered 3-window Ford coupe body at the bottom of the gully. I can clearly recall Kevin saying, "Y'know that coupe body down there would make one hell of a hot rod if we could get it out of there."

I had to agree with him; this rusted old body had a few bullet holes in it, but not enough that could not be repaired by a good welder. We wandered around the houses and ate our meager lunch in the stamp mill. We looked over all the core drill samples and tried to figure out which ones had silver in them. 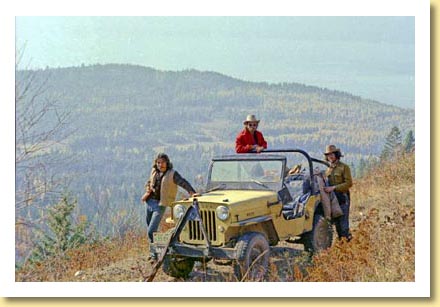 The day quickly passed us by and it was time to head back to the 3B under a warming late afternoon sun that had driven the clouds away. I could feel my snowshoes sink deeper in the snow as we plodded along on our trail going back to the Jeep.

We got a good workout going back to the Jeep. I had taken off my parka and stuffed it in my pack on the way back. We finally made it to the 3B and stripped off our packs. I fired up the Jeep, it settled down to a slow idle, and I let it warm up before beginning the long slow climb up the south side of the mountain.

Kevin pointed towards the mine and all the buildings hidden by the trees and said, "I sure would like to own that place."

I had grown up with Kevin, and knew him very well; he lived a few houses away from me back in the old hometown. He had the same interests as I did, and wanted to live on the fringes of civilization away from the high-speed rat race. 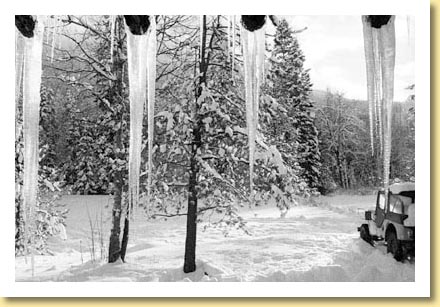 I eased the 3B into gear and we began our ascent up the mountain. The chained-up Jeep began clawing and churning at the snow, and then it sank down to the axles and skid plate, refusing to go on any further up the mountain snowmobile trail. Kevin looked at me with disbelief in his eyes; the 3B was stuck in the snow. The temperature had warmed up about 20 degrees during the day. It had become warm enough for the Jeep to fall through the crust, and the grade was too steep.

I shut the engine down and Kevin asked me, "What are we going to do now? It's over 20 miles back to your place."

"We wait," was my reply. "The snow will freeze again later tonight; it's too warm right now for us to get out of here."

I always carry survival and recovery gear in my 3B when venturing into the unknown. I had my little Svea backpacker's stove and small coffee pot stashed in the Jeep. I cannot say enough good about this small, white gas powered stove. I have owned it for over 35 years and it never has failed to light up like a tiny rocket motor. I was so impressed with it I bought another Svea, just in case this one fails. It never has let me down, even in a snow cave in Alaska at 55 below.

Kevin and I sipped hot coffee as the daylight faded to twilight and then into darkness. We split a big can of hot pork n' beans for supper and waited under a cold, bright, star-filled sky. Around midnight or so, it had re-frozen the snowmobile trail hard enough that the Jeep climbed right on top of the crust, and we were on our way back to the cabin. Another adventure in the Jeep was behind us, but not forgotten. 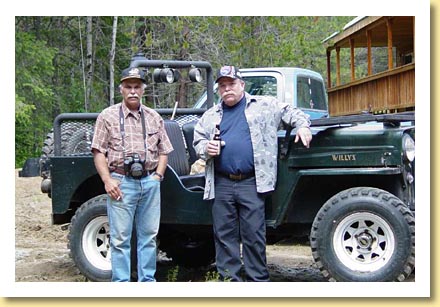 A few years ago Kevin passed by and spent a couple of days with me here on the homestead in Washington, when he was on his way home from a job in Alaska. Kevin asked me, "You still got your Jeep?"

Kevin put his hand on the hood of my 3B, patting it and saying, "This is a great old rig Rich. We sure had a lot of fun exploring logging roads and trails with it back in the old days."

"Let's take it for spin up the hill; you can drive."

Kevin eased the Jeep into gear and we began the steep climb in low range up to the old silver mine that is on my place. When we made it to the top Kevin shut the engine down and said, "This old high hood Jeep of yours is the rock of ages when it comes to 4x4's."

Recently our mutual friend Chester moved here from Alaska and bought a 1946 Navy Jeep. Chester and I have had a hard time running Kevin to ground trying to get hold of him. We want Kevin along when we go explore all the logging roads in the high country above Priest Lake next summer.

For details on the history and possible future of the mine, see the Shoshone Silver Mining Company.

For a different perspective, see the site report on environmental cleanup, from the United States Environmental Protection Agency.

See a topographic map of the area with a 1-square-mile grid, at Topozone.