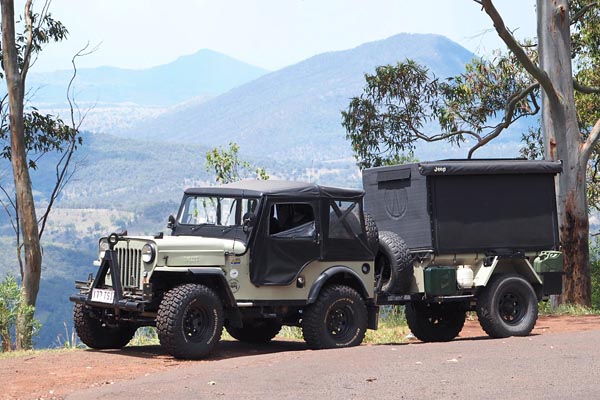 Miran Hunzicker lives in Rathdowney, Queensland, just an hour inland from the Gold Coast Highway, but surrounded by mountains and National Parks. Check out the large version of this photo (370K JPEG) taken in Main Range National Park.

He's well equipped to take advantage of the opportunities for camping and offroad travel in the area. His Jeep and the two trailers he uses for different kinds of trips, were largely scratchbuilt, and in this article he takes us through all three projects. 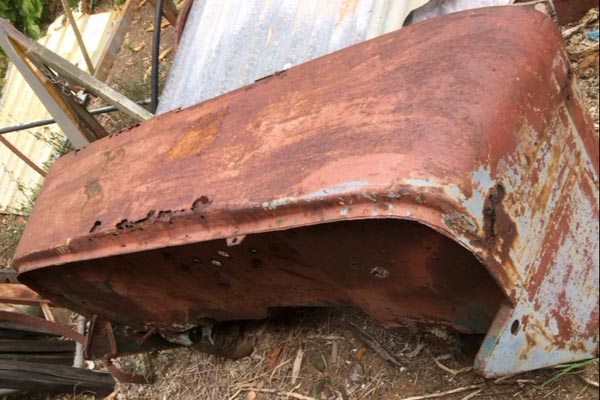 CJ-3B 57348 44091L rolled off the assembly line in Brisbane, Australia on 9 April 1958 (see Willys Australia Serial Numbers). Four decades later it was restored and modified on 20 June 1997 by Lyon Body Works in Brisbane, and was painted blue.

Miran says, "I purchased the 3B in 2010 at Coffs Harbour, New South Wales, and the restoration took 2-1/2 years of weekend work, as the body and chassis were badly rusted (used on the beach). The only good panel on the tub was the firewall and the cowl panel." 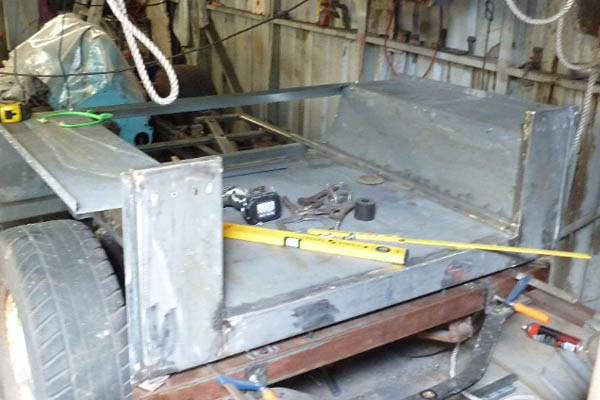 "We bought new side panels, bonnet, guards, tailgate and windscreen frame. We manufactured the floor ourselves out of 2ml zinc steel, and top hat sub-frame out of 4 ml, as well as the 2-inch rubber cab mounts (50K JPEG) between the chassis and the tub." 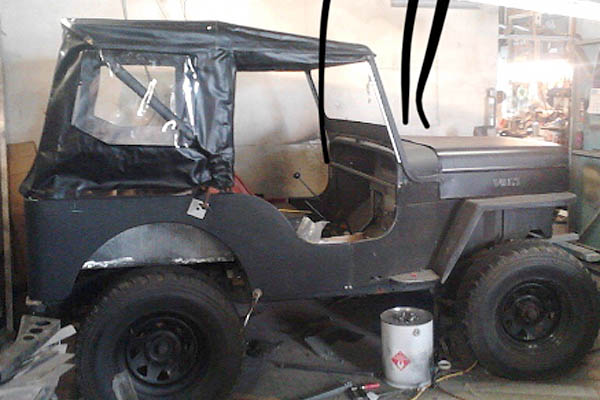 Miran describes the drivetrain: "The original gear box and transfer case were rebuilt, and an overdrive fitted. Limited slip differential in the rear, Dana 44 and a Lock-Right fitted up front, and CJ-7 brakes all round.

"Power steering helps with the 32-inch BFG Mud Terrains. A number of leaf springs were removed to soften the ride. The Bestop Tigertop was purchased from the USA." 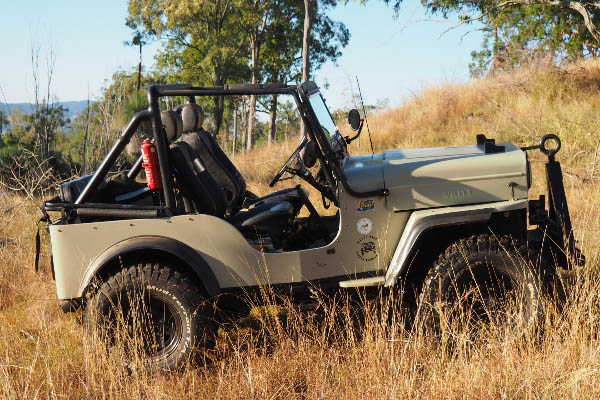 "The colour we chose is Willys Palm Beach Ivory, with a low gloss flattening base added. The leather seats are from a Mercedes coupe, and this adds to the comfort on long trips." 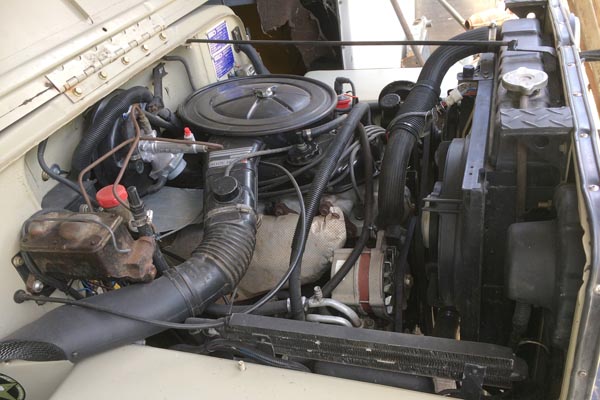 The engine is a 4L straight six, built by Ford of Australia with a crossflow head. Miran comments, "The Jeep had a Holden 6 cylinder -- we used it for a few years but it was worn out. We had a reasonably good Ford motor so I modified the body and chassis to fit. The engine has been modified to produce more torque and a lower RPM."

A closeup of the blue modification plates (220K JPEG) shows how Queensland records major modifications to a vehicle. 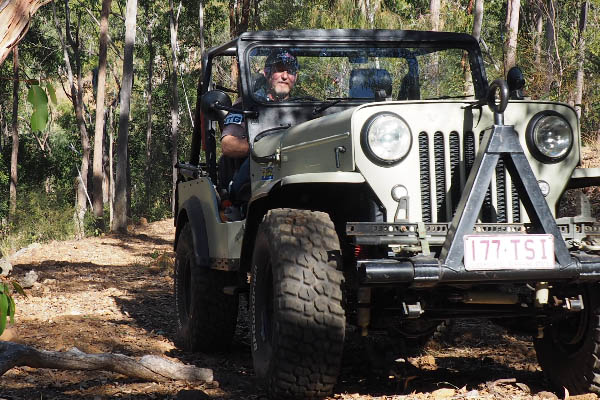 Miran uses the Jeep for work around the property as well as for camping, and likes to travel to vintage Jeep gatherings. 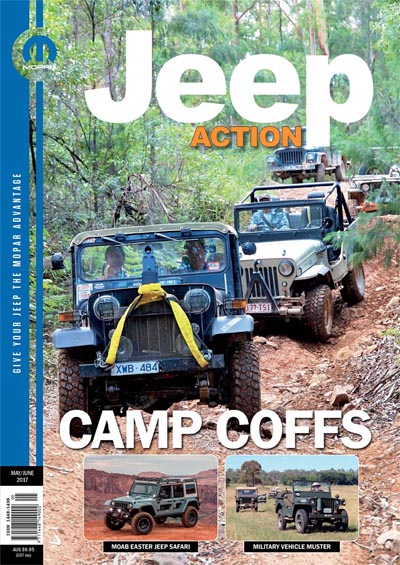 The May-June 2017 issue of Jeep Action, Australia's magazine for Jeep fans around the world, had Miran in the cover photo. It was taken at the magazine's annual Camp Coffs Jeep Weekend, about a four hour drive for Miran, to the New South Wales coast.

The CJ-3B rated not only the cover, but a big photo inside the magazine. 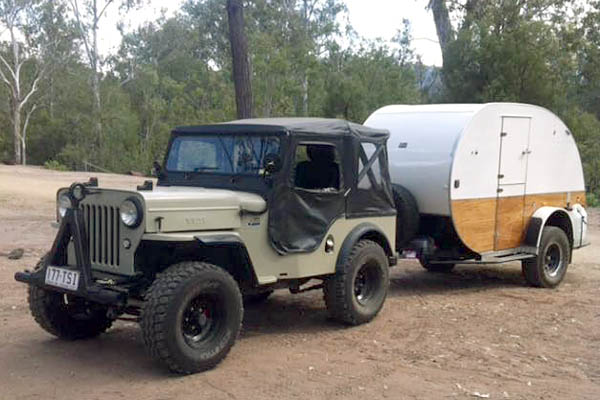 The teardrop-style camping trailer took approx 18 months of weekend work to build, and was finished in 2010.

It's a classic way to travel. Shades of Larry Shank's Mom, Dad, a Jeep and a Teardrop! 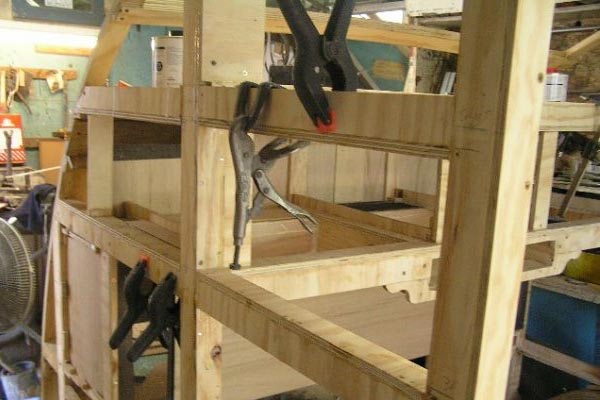 Miran says, "It's made from 3ml marine ply over a timber frame on a steel chassis." 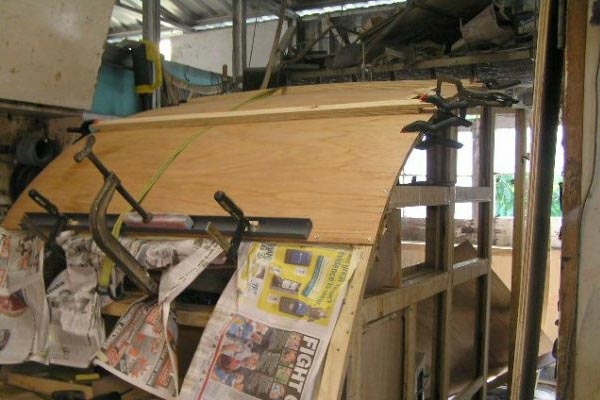 "I added foam insulation between the inner and outer skin." 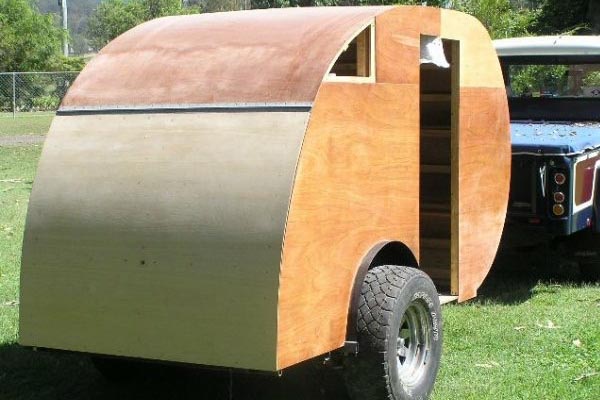 "Two-pack marine paints were used on the inside and out, along with stainless steel fittings." 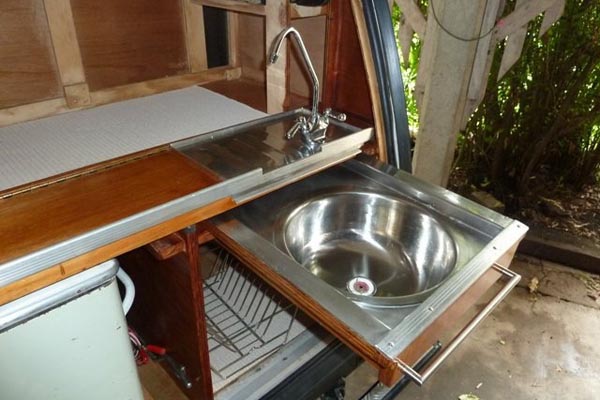 Even in Australia it sometimes rains, and the open kitchen requires some protection (60K JPEG). 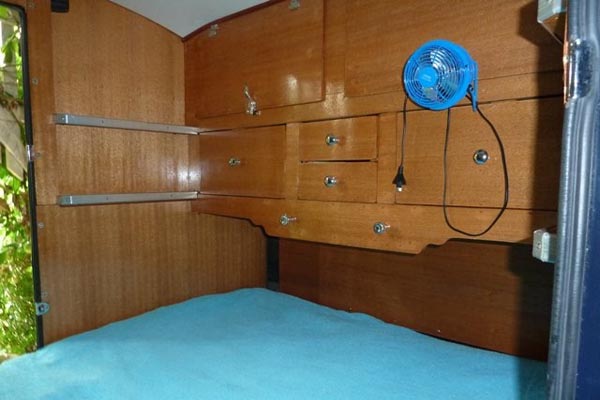 The bed sits approximately 10 inches above the floor for extra storage, and there are doors on both sides for easy access. Drawers and cupboards were installed inside, backing on to the kitchen storage area at the rear. 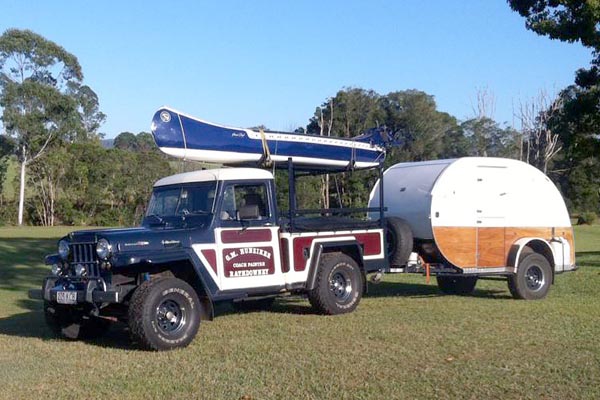 Miran sometimes pulls the teardrop behind his Willys truck, if he wants to take along the boat. 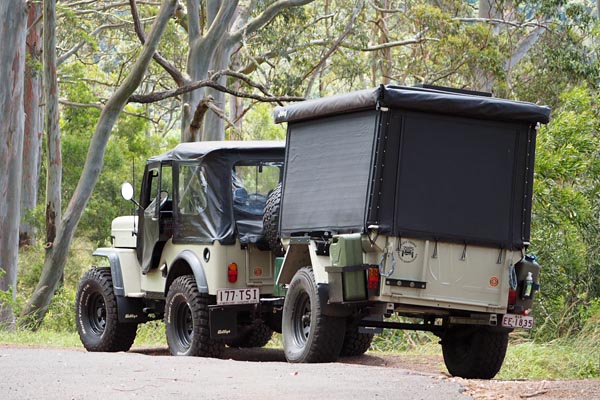 Miran also wanted something a little more rugged for off-road camping, which would have the look of a classic Jeep trailer but be large enough to sleep in. 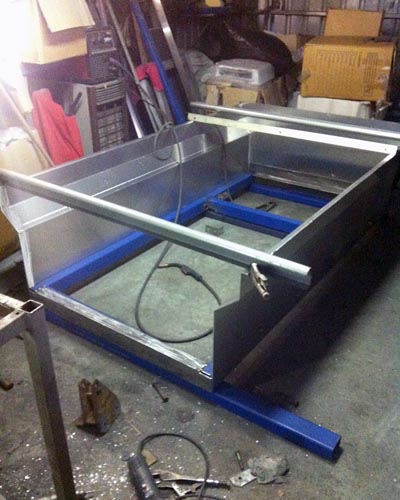 He says, "The Willys trailer took about four weeks to build, and is approximately one foot longer than a standard Jeep trailer. It's on a steel box chassis, designed for harder off-road trips." 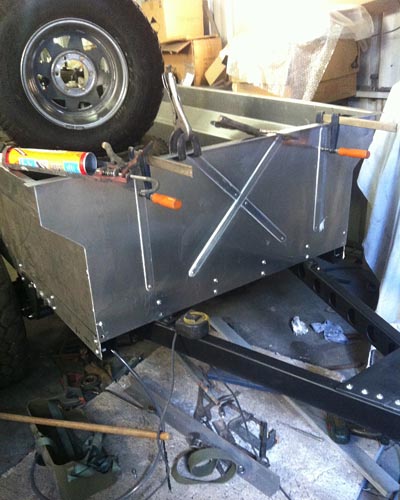 The trailer has its own spare wheel mounted on the front, sitting face to face with the Jeep's rear-mounted spare. 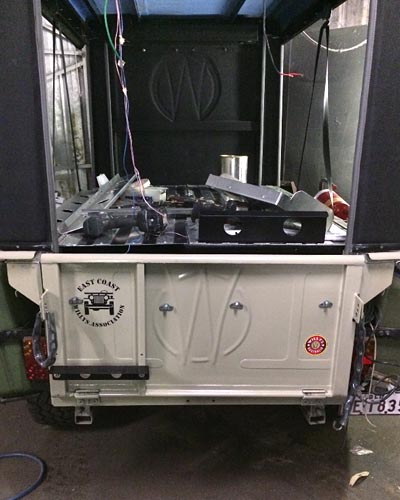 Miran describes the upper body: "The roof and front is aluminium sheeting covered with 5ml of wet suit foam inside and out, then covered in black ripstop tonneau vinyl, also inside and out. The side and back curtains are the same again, without the aluminium sheeting, so they can be lifted to use as an awning and entrance to the sleeping area. Mosquito netting is in place for hot summer nights." 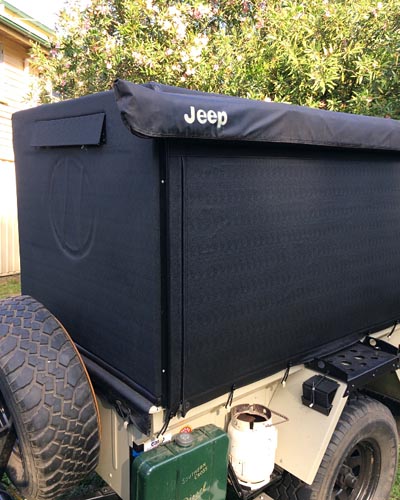 "A fan is installed in the roof to pressurise the inner sleeping area to help keep the dust out. There are solar panels fitted to the roof, and LED lights, plus USB ports for charging phones, lights, cameras etc."

This new sleeping enclosure completed in 2018 replaces an initial design which had a tent (60K JPEG) mounted on top of the trailer. 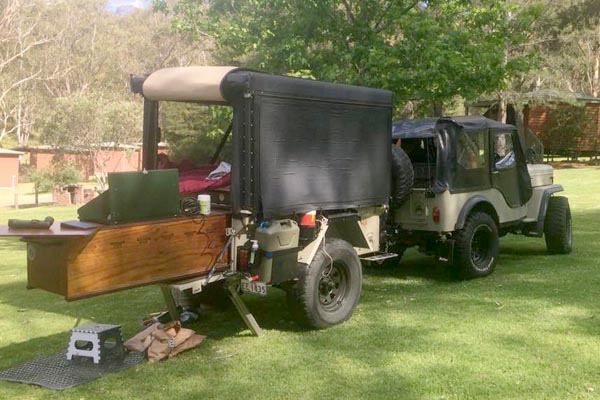 Miran adds, "It has a pressure water system underneath. There is also a large storage area underneath the bedding, with a slide out kitchen and work bench. The bed is designed similar to an Aussie swag to keep out dust and rain water." 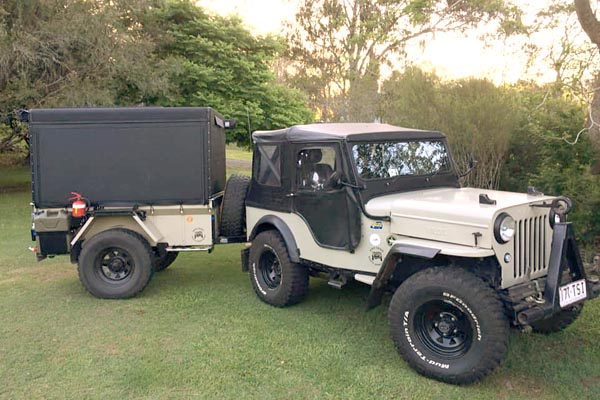 "We took the 3B with the Willys trailer just south of Rathdowney to the Border Ranges National Park, and up an extremely steep and winding road with a large sign at the bottom saying no trailers or caravans past this point!

"The next big trip, planned for June 2019, is a two week trip with members of the Willys Australia Facebook group. Final destination is to attend the 'Classic Not Plastic' event."

Thanks to Miran Hunzicker for the details and photos. -- Derek Redmond