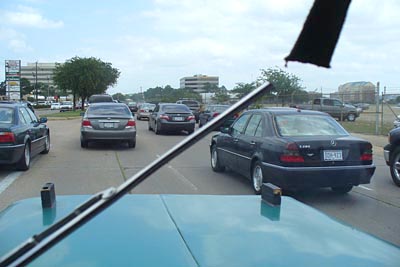 Here are some photos of my drive to work -- proof that some of us actually use the li'l 3B for a daily driver, because I know it's hard to believe. This is in response to the "Daily Driver" blog on the CJ-3B Bulletin Board.

Kent in Colorado originally asked on the Bulletin Board:"Just want to know: who else uses the ole Jeep for a daily driver? I drive mine like it's all that I have."

Bill Dade in Washington state replied: "I drive my '64 to work everyday. 40 miles round trip. It purrs right along at 60 with the overdrive. Then I make service calls all day long with it. I put about 80-100 miles a day on it."

Dave Pete: "There was a time when I drove it every day to work, 10 miles one way, pavement, 55 mph for 2 miles, 45 mph for 8. I don't have an overdrive, but if I did it would do the 55 mph better. The tube type military NDTs are only inflated to 12 psi and that is not only enough for the lightweight vehicle on the pavement, but good for off road and easier on my back -- it really smoothes out the harsh ride. I would routinely drive it (up to 55 mph) to the other side of town to make a Home Depot run and have even carried 20 2x4x8's sticking out its back side. Oh, it's a daily driver all right."

Dave also commented: "I wouldn't do Interstate or similar highways, but because of other drivers, not cause of Lil Willy. Even in Yellowstone and Glacier Parks I had the ever-present minivans on my ass while I did 40 in a 40 mph zone. I just smiled and waved. They would zoom around me in anger and whip into the next over-view. I would cruise right by cause I was in a constant overview top down and windshield folded. Then they would zoom around me again in another minute. Hahahaha. I say go home and rent a video of National Parks."

Michigander: "That does it! Up till now my '63 3B has been strictly for off road use. In the morning I plan to go to the DMV and get a historical plate. In my state it's a one time $30 fee and it's good for ten years. Personalized, the plate will read 'Willys'. Then it's no top, no doors, windshield down and I cruise." 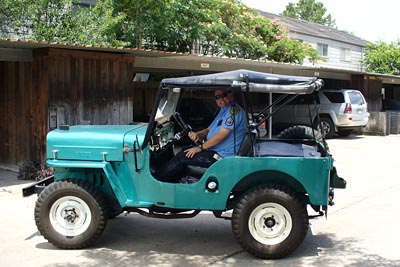 Well, I have worked for the Houston Police Dept for about 12.5 years and currently have an 18-mile one way drive to work. Check out some of the equipment I carry every day (120K JPEG): a duty bag carries keymap, vital paperwork etc. The body armor goes without saying. The rifle and shotgun (in gun case) are unfortunately necessary tools for today's police work.

Here I am in uniform headed out to work. My wife took the photo of me backing out of the 3B's space. I had the top on today because the weatherman stated 40% chance of rain. I don't think anyone will argue against leaving the B at home when it is actually raining. NDCC's don't do well on wet pavement!

Daryl mentioned on the Bulletin Board: "Got caught in a thunderstorm yesterday with just a bikini top on the Jeep. Western Washington. Anyway, I don't like to drive the Jeep to work as I do 24-hour shifts in a really high class neighborhood. My '53 CJ-3B works for just about everything else though."

Copperswilly: "I drive mine just about every day that it doesn't rain. Back and forth to work, to the store, to parades, in the parades around town, to tow my boat, my car trailer. I have an aluminum hardtop that I haven't restored yet but as soon as I do my Jeep will be out in the rain as well. Why would you take a machine like the Jeep and leave it sit in your garage? If the machine could talk it would tell you that that isn't where it wants to be."

"I have had it on the highway doing the posted 55 but I do worry about the big rigs and the idiots going so fast that they are about to take off. My Jeep is tagged and I'm driving it. I've had a '91 and '99 Wrangler in the past and I used them every day -- why not my '54? I watch for signs of rust and other issues resulting from the elements and take care of them as they arise just like my other vehicles. I've had more problems with it from letting it sit in the garage then I've ever had from getting it out and driving it. I say drive it as much as you can." 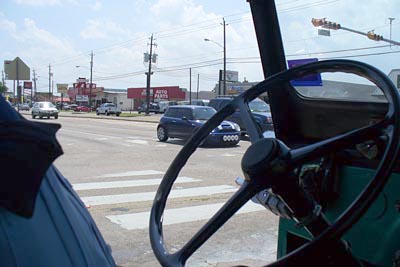 OK, I have tried to show the trip from house to work one way by using recognizable landmarks along the way. Here I'm waiting at the light on Fern at Dairy Ashford.

I actually have two jeeps, the '64 3B and '02 TJ. Both are enjoyable especially with the top off. But the 3B gets taken out about 3 days a week. I take some back roads thru neighborhoods when I am in the 3B. Nothing beats that feeling of freedom. With the windshield folded down, the air rushing past and that breakneck speed of 40 mph.

Like Dave stated on the Bulletin Board: "When life felt too stressed I drove the Jeep. The sound, the smell, the feel of my hand on the wheel would re-center my psyche, and all would once again be well in the world. The additional joy is the dirt roads, and the top down, and the windshield folded, and the solace, and the views."

An anonymous reader chimed in: "I don't believe that anyone would use their 3B as a daily driver. I shouldn't say that; if you only work 3 to 5 miles away then I could see it. 99% of the people on this board cuss you out if you take the 3B over 35-40 mph. So if you need to hit the highway what are you to do, take a drive 15 miles out of your way to go around the highway? So really only Bill is a true daily driver on this board. He claims to drive on the road on the highway to and from work and makes service calls. I am glad someone uses the Universal Jeep to get from point A to B."

Kent responded: "Hey anon -- come to Colorado and you will eat your words. My old '54 gets run like there is no tomarrow. OK, and highway? Well at times I have to run at 55 mph. I put at least 28 miles a day on mine. Days off it is going on fishing trips and pulling a small lawn trailer. People that see me around cannot belive this old Jeep goes all the time. In fact I will wear it out one day. Then, well maybe scrap it. Just an old piece of mechanical metal that is built to be used. And that I do!" 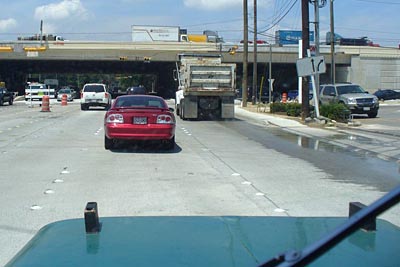 This photo shows the 3B approaching Interstate 10 and about to pass under. I could be up there -- I can either use the freeway (I-10) or go the back way. The drive is about the same. On nice days I will drive the Willys and take my time with a nice relaxing drive. Some days you just don't want to fight the freeway traffic. And putting the 3B on Houston FWY's is not advisible. For that trip I use the '02 TJ. 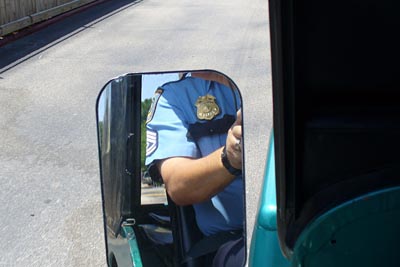 So what if I have to drive a little out of my way to get to work? Gives me time to relax. If any of you have ever been to Houston, you know that 55 mph on the freeway will get anyone killed. I've had the 3B up to 60 plenty of times, but why push it? A nice relaxing drive, cruising at 40-45 mph on a beautiful day really puts me in the right frame of mind. Oh did I mention I am a cop, so who needs to get to work in a bad mood! 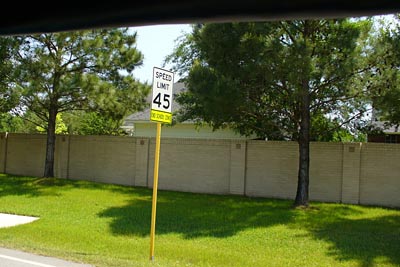 Here I'm on Tanner, and you can see the speed limit. The 3B seems to perform best in this range, 40-50 mph. Not pushing it, just taking my time. I am not sure what the mileage is, but hey I didn't buy the Jeep for the mileage. With careful planning and a keymap I can get about anywhere I need without using the freeway system in Houston. And on my days off I pretty much drive the 3B exclusively. Unless there is a need to go far distances or get on the freeway, that is my ride. 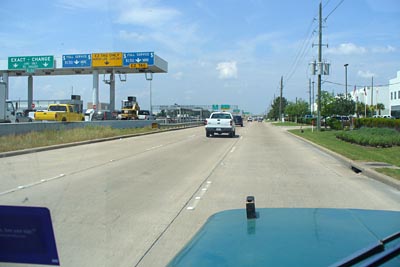 This photo is on the service road of the West Sam Houston Tollroad, approaching US290 at Little York. 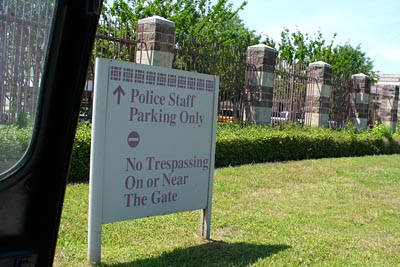 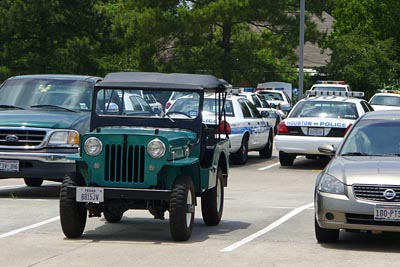 Here's the 3B parked at the station, in case you don't believe I actually drove to work! Sure there are times when I want comfort and A/C, or the weather prevents driving the 3B. But I try to get her out on the road as often as possible. Daily driver, within reason, you bet.

Thanks to Steve for the photos and his 2008 story of the flatfender daily driver. After enjoying the 3B for a few years, he sold it in early 2011. -- Derek Redmond