New Paint for the 40th Birthday 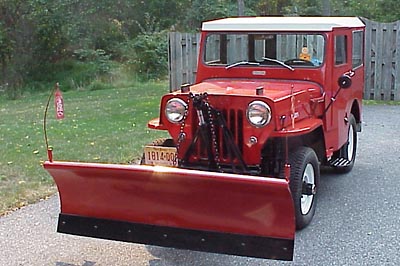 The previous owner of my 1962 CJ-3B (S/N 57348 87484, paint code 78, trim code 164) told me that it was purchased new by a local gas station owner for the sole purpose of plowing his driveway and the parking lot of his gas station. He owned it until the late 1970's when diabetes impaired his sight and legs to a point where he could no longer drive. The title then passed to his neighbor who has a business across the street.

This year, in honor of the Jeep's 40th birthday, I decided new paint was in order. (See the same view before the repaint, 100K JPEG.) 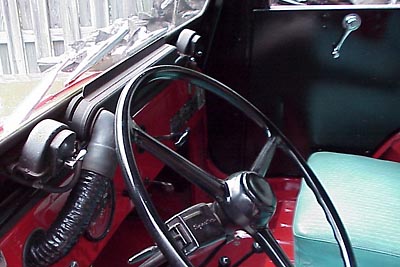 After I bought it in 1995, it needed nothing the first year. Since then I have replaced the battery, the clutch, master cylinder, carburetor, two wheel cylinders, front springs, shocks and tires, radiator, and speedometer cluster. So it is not as shipped from the factory, but I have tried to find NOS or good used parts as much as possible.

This photo shows the factory defroster and twin vacuum wipers. 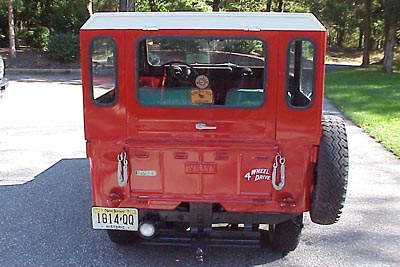 Since I was doing the body and paint, I also put on replacement taillights. One of the original ones was a casualty of my master cylinder failure. Ever plow snow without brakes? My mailbox post did not fare well either.

I also added a driver's side mirror, repro steps, a new shift boot for the transmission, and new tailgate chains and covers. See a rear view before the repaint (90K JPEG). Also a "before" photo of the right side (100K JPEG.) 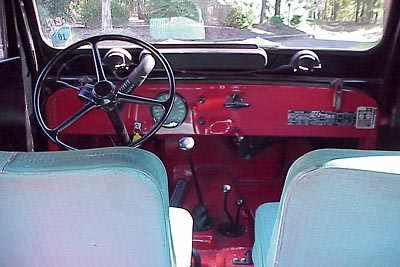 Now, with good brakes, and the new paint to keep it from dissolving, it should be ready for decades more work. See First Snow of the Year for some working photos.

Who knows, now it's so cute again, maybe even a summer picnic once in a while. 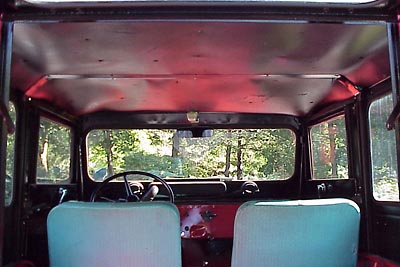 The green upholstery is original. I find it an odd combination with the red but I remember an old '68?? Bronco that had that color. It's funny but my '62 4WD wagon and '62 Pickup also have the aqua color scheme.

My goal is to accumulate the complete '62 utility product line over time, but I don't usually pay too much for the vehicle since the restoration cost is so high versus the value of the finished product. I am trying to locate a good stock '62 panel delivery to add to the collection. Again with the same goal of being stock. So many of these have been cut up over the years. Patient searching will turn one up some day I hope.

Thanks to John for the story and photos. See First Snow of the Year for pictures of John's Jeep and snowplow in action.

As of 2019, this Jeep belongs to Shea Roberson in Connecticut. -- Derek Redmond