and the TV series Hong Kong

First staged in 1901, the Chicago Auto Show is probably both the oldest and largest auto show in North America. One of the many head-turning highlights of the show over the years came in 1961, when Willys Motors displayed a fleet of Jeeps custom-finished in gold paint with black upholstery. The recently-introduced Jeep Surrey was the centerpiece of the display, with gold-and-white-striped roof and seats to compliment its gold paint. 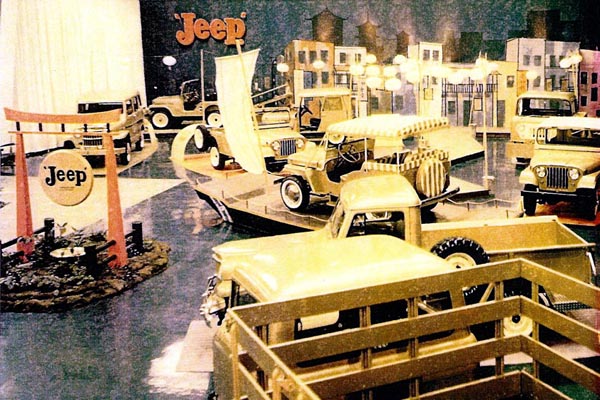 The unique display had eleven Jeeps mounted on replicas of Chinese sampans, floating in a simulated Hong Kong harbor. The display had first appeared at Detroit's National Auto Show on 15-23 October 1960 (see an advertisement, 230K JPEG), although a Willys press release (110K JPEG) issued the previous April had listed only eight gold Jeep models that would be on display there: 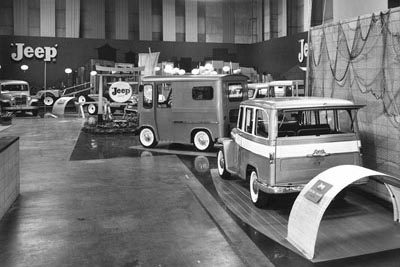 This photo of the entrance to the display in Chicago shows two models on that list which are missing from the color photo above: the 2WD Station Wagon and new Fleetvan. The color photo was perhaps taken from the roof of the Fleetvan, and shows that a CJ-6, an additional CJ-5 and a DJ-3A Dispatcher were added to the roster at some point. 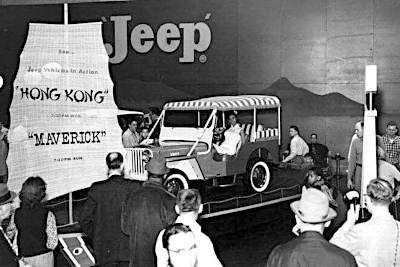 As of 2016, Ken Neeb in Ohio was reportedly in the process of restoring a gold and white 1961 Surrey with serial number 56337 20189 and a Special Order 999 paint tag. The Jeep was originally purchased by his father, who began the restoration. It's possible this is the Surrey from the Auto Show.

Of course the big question is:   Why did Willys not include a CJ-3B in their 1961 gold collection? Sure, the model had been around since 1953, but it was still selling well, and the rest of the Jeep lineup wasn't much newer (with the exception of the Fleetvan.) In fact the Station Wagon, originally designed in 1949, "entered the 60's looking decidedly antique" (as Jim Allen once put it.) The 3B was also a big part of the company's substantial export sales, and there were sure to be international buyers at the big American auto shows.

So was a CJ-3B supposed to be one of the gold Jeeps? Was it damaged at the factory? Or was it the victim of company politics, perhaps a dispute between Willys Export and the domestic sales division? Its absence from this high-profile event perhaps signalled the beginning of Willys' acceptance of the high hood CJ-3B's reputation as the "ugly duckling." If so, it was an ill-considered decision. 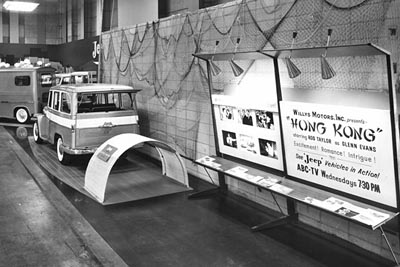 The photo of the entrance to the Chicago display also reveals the reason for the harbor theme: an ABC television series called Hong Kong, starring Rod Taylor and sponsored by Willys Motors and its parent company Kaiser Industries (see a Jeep commercial from the show, 10MB QuickTime movie.)

The show was perhaps also the inspiration for the gold paint; Taylor plays a journalist who spends plenty of time entertaining lovely ladies at the "Golden Dragon" nightclub, and gold smuggling is one of the criminal activities he uncovers. 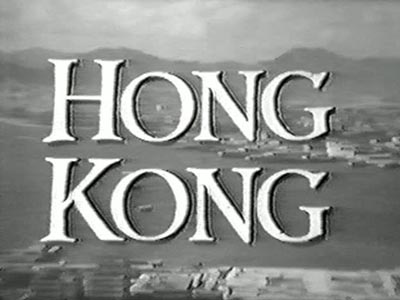 Rod Taylor sets the scene for the show, with his dramatic opening narration: "Hong Kong -- the last foothold of freedom on the vast mainland of China. Here in this city of anxious millions, the fate of Asia hangs by a thread, and some say the world's as well. My job here as an American news correspondent, is to keep that picture clear, to work with our British friends to keep this lighthouse of liberty shining. But the truth must also be aided by action, and often I find myself in the fight." 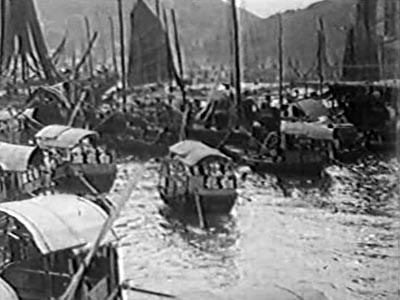 The designers of the Willys display had clearly looked closely at this shot in Hong Kong's opening sequence. The show had a strong sense of place and adventure because 20th Century Fox shot on location in Hong Kong as well as at their Los Angeles studios.

The series still stands up well today, but it was not a kids' show, and in an early 7:30 time slot against NBC's popular Wagon Train, it didn't get strong enough ratings. It was cancelled in 1961 after one season (and Willys went back to concentrating on sponsoring Maverick with James Garner.) Hong Kong has never been officially released on video.

In the August 1961 issue of Jeep Merchandiser, a newsletter for Willys dealerships, salesmen were alerted to which commercials (230K JPEG) would air on that month's episodes of Hong Kong and Maverick, so that they could encourage prospective customers to watch. 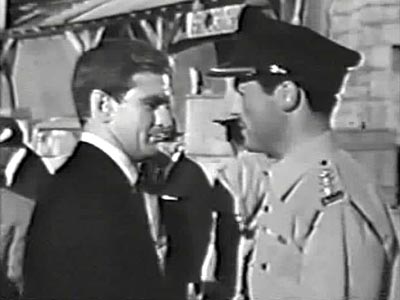 In his first starring role, Rod Taylor played Glenn Evans, a journalist assigned to cover the Orient, who was equally adept at crime-solving, fisticuffs and romance. The suave newspaperman thwarted blackmailers, smugglers, kidnappers and murderers. The supporting cast included Lloyd Bochner as the very proper Chief Inspector Neil Campbell, and a new female guest star each week. See the Complete Rod Taylor Site for more details on the show.

Note the Jeep windshield in the background of this shot of Taylor and Bochner. 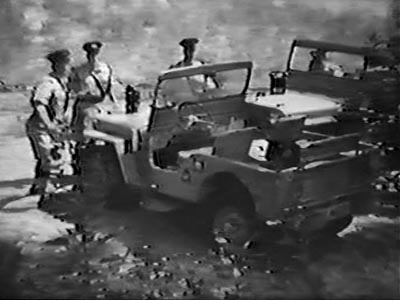 Chief Inspector Campbell and his Hong Kong Police are occasionally seen in the series driving Willys CJ-3A Jeeps, sometimes radio-equipped (30K JPEG). Maybe this is what got Willys interested in the show. If it had been "product placement" by Willys they would likely have used newer Jeeps, and might have balked at a shot of a Jeep parked outside police headquarters with a background of Land Rovers (30K JPEG), the actual patrol vehicles of the British-run police force (see footnote.) 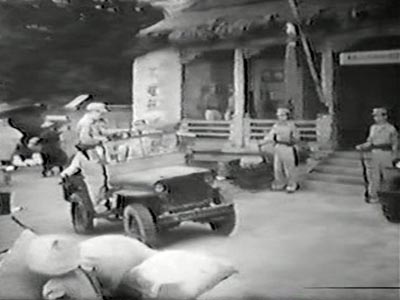 The first episode of the show involves a U.S. sailor who accidentally crosses the border into Red China, and is arrested as a spy. The Chinese army is seen driving a couple of Willys MB's, which now have red rather than white stars on the side. Anybody know whether this use by the Chinese of vehicles perhaps captured in Korea is authentic? 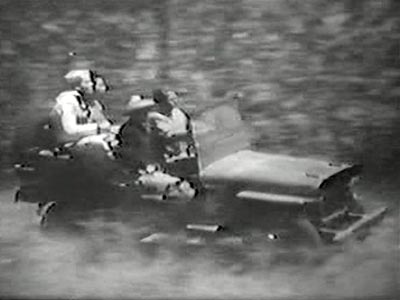 When Glenn Evans rescues his friend the sailor, and they escape in one of the Chinese jeeps, there is a good chase scene in which the stunt driver catches some air with the MB. The episode, titled "Clear for Action" was directed by pioneer woman filmmaker Ida Lupino, who was pretty good with action scenes and also directed episodes of The Untouchables, The Fugitive, The Rifleman and The Twilight Zone. She had become a director in the 1950s after some success as a Hollywood actress in the 40's. 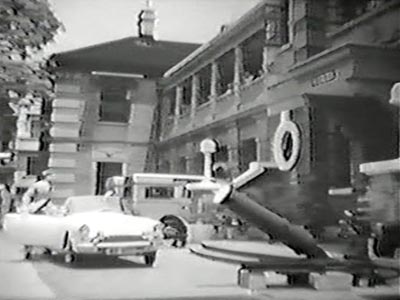 The vehicle which actually got the most attention in Hong Kong was the white Sunbeam Alpine driven by Rod Taylor. In this frame he's seen pulling up in front of police headquarters.

It's interesting that after the show was cancelled, Rod Taylor was asked to audition for the role of James Bond, before landing a big part in Hitchcock's The Birds. Although Taylor lost the James Bond role in Doctor No to Sean Connery, the Alpine got a big boost when it was chosen for that movie as the first Bond car.

Also at the Auto Show 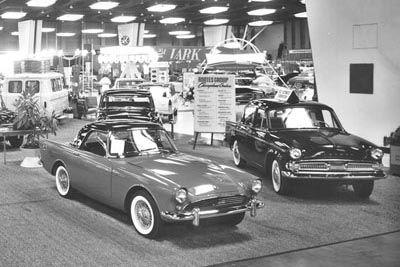 Back in Chicago, the Sunbeam Alpine was among a number of British cars displayed by the Rootes Group in their 1961 exhibit, but they seem to have "missed the boat" in not capitalizing on its connection to Hong Kong. The large copy of the photo (80K JPEG) includes the Singer Gazelle, Sunbeam Alpine, and Hillman Minx.

The year 1961 was the first time the Chicago Auto Show was held in the mammoth new McCormick Place exhibition center on the lakefront, substantially increasing total display space. 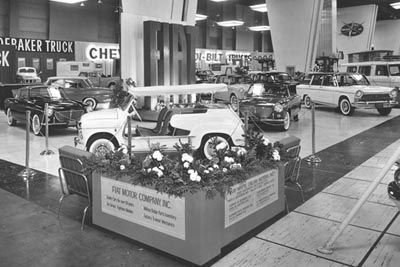 Fiat Motor Company was showing its improved version of the Jolly beach buggy, the Jolly 600, which Willys had already taken a close look at, and was now taking on head-to-head, with its Jeep Surrey. (See Development of the Willys Jeep Surrey on CJ3B.info.) 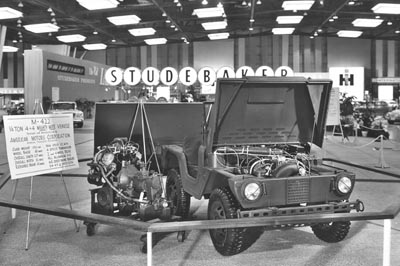 And the gold vehicles in the Willys display were not the only "jeeps" at the show. A close relative, the lightweight Mighty Mite M-422 1/4-ton 4x4 vehicle, was on display by American Motors Corporation. The open hood exposed the air-cooled engine, and another aluminum V-4 engine and transmission sat beside it. AMC had sold quite a few to the Marine Corps, but at over $5,000 per unit, they didn't have much success finding other buyers. 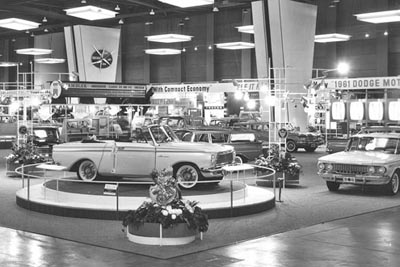 AMC was having better luck with its Rambler. In early 1961 the U.S. economy was just coming out of a year of recession, and Ramblers were inexpensive. The brand had finished 1960 with 6.4% of the market, their best share ever, and would continue to be the third most popular car in the U.S. during 1961, according to Consumer Guide. But AMC clearly wanted to show that the economical Rambler could also be a fun car, with the convertible featured on a rotating platform.

AMC did have some success in the 60's with "fun cars" such as the Marlin, Rebel and AMX, but at the end of the decade they would resume their focus on practical vehicles, with the purchase of Jeep from Kaiser Industries.

Thanks to Colin Peabody, Bruce Agan, and the Chicago Auto Show for the photos. The Willys ad and press release are courtesy of Bill Norris and the Detroit Public Library. If you know of any other surviving gold Jeeps lurking in garages out there, I hope you'll let me know. -- Derek Redmond

Footnote: The use by Hong Kong Police of Land Rovers rather than Jeeps is documented at Police Vehicles in Hong Kong and Land Rover (1948).