The CJ-3B seems to have played only a minor role as a vehicle for the Royal Danish Army (Hæren in Danish.) According to Danish Army Vehicles, most of the Jeeps used by the Army through the 1950s were some 3,000 surplus World War II Willys MB's and Ford GPW's delivered to Denmark by the U.S. Mutual Defense Assistance Program. 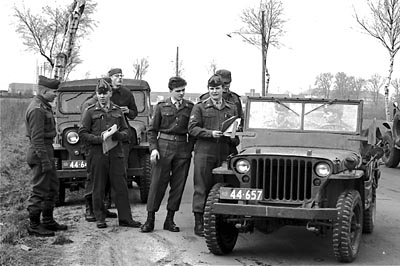 This photograph of a Willys MB is from the Royal Signals Historical Collection, courtesy of Danish Army Vehicles. In the background is one of an unknown number of CJ-3Bs apparently purchased in 1955. The Army had ordered CJ-2A, 3A, and 3B Jeeps through Nordisk Diesel in Copenhagen, to supplement and replace some of the MDAP vehicles. 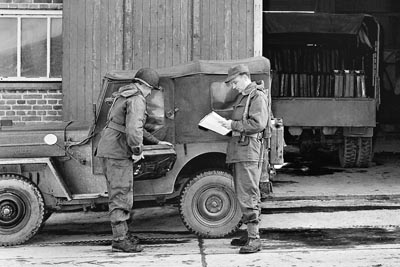 Another of the Army's 3Bs is seen being refuelled, in this 1961 Danish Defence photo found by Leif Hellström.

A group of five surviving 1956 CJ-3Bs in Denmark with adjacent numbers on our Serial Number List suggests that there were at least 39 CJ-3Bs with consecutive serial numbers exported to Denmark, and there could possibly have been as many as 200. These were the last CJs for the Danish Army however, as Denmark instead purchased about 1,000 M38A1 Jeeps from Willys between 1960 and 1965. 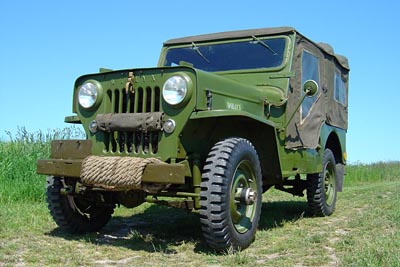 Ian MacGregor Schmidt is a Dane with an English-sounding name, courtesy of a Canadian mother. He owns one of those 1956 ex-Danish Army 3B's, still pretty much in its original military condition. The Jeep was auctioned as surplus in 1972 to a officer retired from Den Kongelige Livgarde (The Royal Life Guards, whose flag is at the top of this page.) He used it around his farm in South Sealand in Denmark, and after his death Ian purchased it from his family. It still has the military license plate holder, but has never had plates on it since it was in the Army. 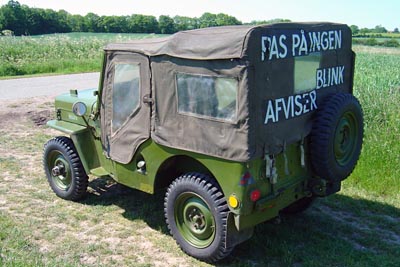 The text on the rear of the original canvas top reads, "CAUTION NO TURN SIGNALS," although the Jeep does have the brackets on each side of the windshield for the swing-out signals typically mounted on Army Jeeps (see both the MB and 3B in the photo above.) Ian says that since the pictures were taken he has bought and installed an Ermax turn signal kit of that type. 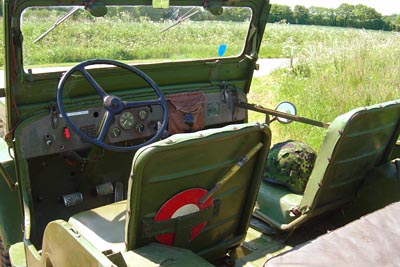 Some of the other Danish Army features are: log book in a pocket on the dashboard (to record oil changes, mechanical problems, etc.), a traffic-signalling sign stored behind the driver's seat, Bosch electric wiper motors, Ermax blackout taillights (130K JPEG), Ermax side mirrors, and rear-mounted spare. The Volvo headlights may have been added later. 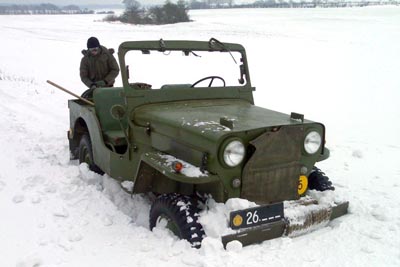 This photo was taken prior to Ian removing the military markings and repairing the windshield. His Jeep probably predates the options Willys added later on the M606 military version of the CJ-3B. However, it does have the swing-out ventilating windshield, which seems like an unnecessary feature in a cold climate. More useful is the Army-issue canvas cover for the front grille. 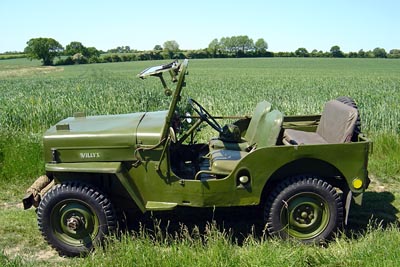 Ian's CJ-3B was originally olive drab, but was painted over in a brighter green at some point.

See the original paint (as well as the grille cover and turn signals) in a 1996 photo by Ole Willumsen of a CJ-3B at the Royal Danish Arsenal Museum in Copenhagen (100K JPEG), courtesy of the Danish Historic Military Vehicle Association. 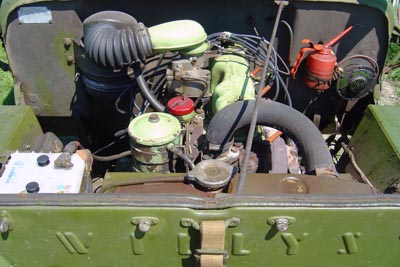 The original OD paint can also be seen in the engine compartment, along with some distinctive colors used on engine parts by the Army, and an oil can in a bracket on the firewall. A small mystery is the engine number above the water pump, which is J4803801. The fact that it begins with "J4" rather than "4J" may simply be a stamping error at the factory. 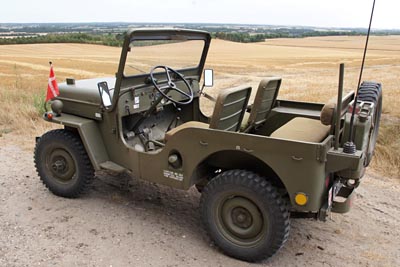 Thanks to Ian MacGregor Schmidt for the photos. As of 2020, the Jeep has been sold to Kevin Voigt.