"America's Artist" had an earlier career with adventure mags

Highly respected historical artist Mort Künstler (born 1931) had an early career from the 1950s to the 1970's creating thousands of cover paintings and article illustrations for "men's adventure" magazines like Stag, For Men Only, True Adventures, Male and True Action, as well as more mainstream publications such as National Geographic and Newsweek.The aptly named painter (Künstler literally means "artist" in German) also used the pseudonyms Martin Kay and Emmett Kaye because publishers didn't want it to look like one person was doing so much of the work.(1)

"The magazines were a training ground for an awful lot of famous artists and writers," Künstler says. "I could not do today what I do without that background. We told stories directly and immediately. You learned composition and color. You had to be creative and you had to meet deadlines."(2)

In 1982, a commission from CBS-TV to do a painting for the mini-series The Blue and the Gray got him interested in painting the Civil War, and he is now probably the most prominent historical artist in America.

Although best known for Civil War art, he also likes portraying 20th century technology. He was appointed the official artist of the Space Shuttle program in 1979, and in his adventure magazine cover pictures he often painted ships, subs, airplanes, helicopters, and armored vehicles; surprisingly not a lot of cars or Jeeps. Occasionally a CJ-3B, although not always in a historically accurate context. 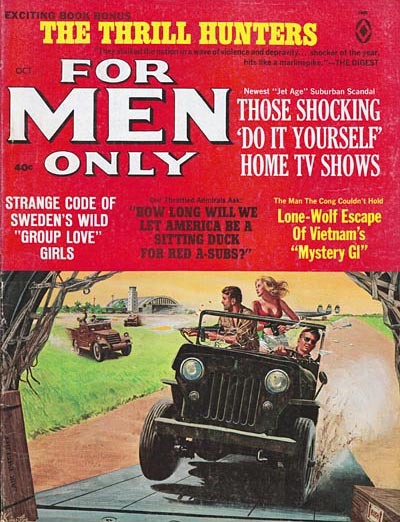 This cover painting depicts the climax of the story called "Yank Gun Runner Tom Patrick: They Call Me The 'War Maker.'" (Oddly, the article doesn't get billing on the cover.) Tom narrates the tale about smuggling weapons ashore for a rebel group somewhere in South America.

Tom and his accomplices escape from the army by driving a Jeep into the back of a cargo plane as it takes off. The country isn't named, but at one point he refers to the airfield as "Concepcion airport" so presumably it's Chile, and the olive drab CJ-3B could certainly be one of the Kaiser M606s sent to Chile in the 1960s. The big Lockheed Constellation parked in the background suggests that this airport is not just a small dirt airstrip.

The soldiers are chasing the Jeep in M3A1 armored scout cars, and Chile was also one of three South American countries which bought M3A1's after World War II.(3) See Vincent Wai's box illustration (130K JPEG) from a Hobby Boss M3A1 model kit, for a better look at the vehicle. (Interestingly, Mort Künstler also did paintings for model boxes.)

Not sure what the small cargo aircraft with the rear ramp would be; it has two engines, according to the text. Possibly an RB-1 Conestoga (100K JPEG)?(4)

There is a black and white illustration (320K JPEG) with the story inside the magazine, by another prolific magazine artist, Gil Cohen. The Jeep shown is an MB rather than an M606, and a PBY Catalina flying boat is also included.

From the text written by J.J. Cross, here is the action as the Jeep chases the plane down the runway: 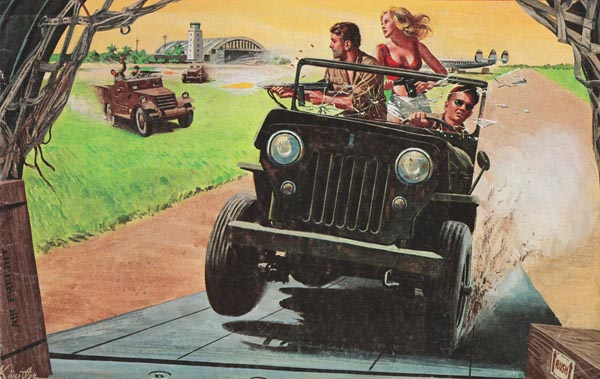 "The personnel carriers were after us, the machine guns behind that armor spraying the jeep. Pilar and I were slapping magazines into our Stens as fast as we could fire them. Swenson had the tough job. In front of him was a narrow ramp moving at 30MPH. He had to put us in there and fast. We had to be going at exactly, but exactly, the right rate of speed and it was a tough place to concentrate.

"The ship's belly was above us now like the Tunnel of Love. The windshield flew out of the jeep as though it had been hit by a giant hand. Swenson's eyes didn't waver. I went through one more clip on the Sten and a gunner on the lead personnel carrier slipped off his perch, hit the ground, rolled and kept rolling. The whole jungle was alive with soldiers and the deadly clatter of their fire.

"Then we were on the ramp, and then in, Swenson braking gently but firmly as we raced into the plane's insides. It was up to Barney. Above the fire, we could hear him race the motors, building up speed desperately. The firing didn't diminish. Holes began breaking through the fuselage."

Needless to say, they got away, and Tom and Pilar (the woman) ended up together.

Mort Künstler had also painted a high-hood Jeep in 1962, but he had used the CJ-3B (1953-68) incorrectly in a story set during World War II. It's a mistake he probably would not have made later in his career, when he became known for his thorough historical research. (But he had already made it once before, in the background (180K JPEG) of an illustration in the July 1960 issue of Stag magazine, which also had a Künstler cover.)(5) 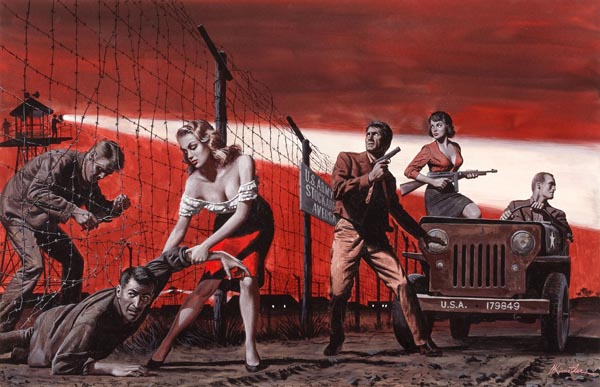 The scene is notable for the female characters, who are dressed in the usual revealing clothing but are shown in active roles rather than just as helpless decorations, as was often the case in the "adventure" magazines. 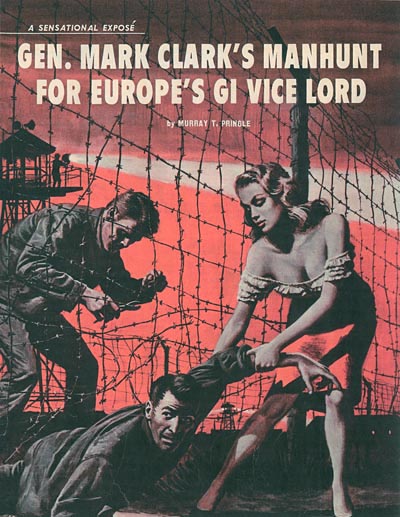 Except for the full-color covers, these magazines typically were black & white newsprint, so illustrations for the articles were usually black & white or sometimes duotone (black plus one other color, in this case Burnt Sienna.)

The published version of this painting filled the first two pages of an article titled "Gen. Mark Clark's Manhunt for Europe's GI Vice Lord." The article was based on the true story of the "Robert Lane gang," a group of deserters who went on a crime spree in Italy in late 1944, culminating in the murder of an Italian civilian during a robbery.

The gang leader's actual identity turned out to be Werner Schmiedel, from Pennsylvania. Schmiedel's full story was later told in the Allentown Morning Call newspaper.(6)(7) 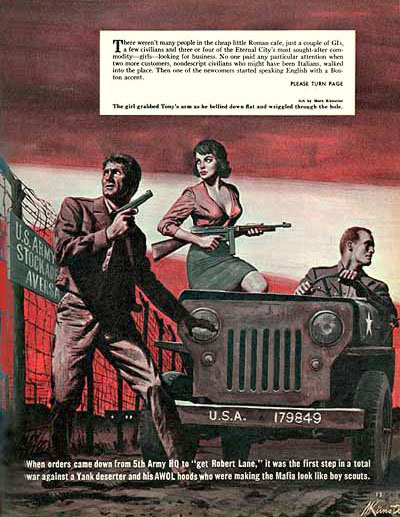 The sign in Künstler's illustration identifies the Army stockade at Aversa, Italy, from which Schmiedel did actually escape after originally being sentenced to 20 years for desertion. He was eventually hanged for murder in the same prison, on 11 June 1945.

In the course of their string of robberies and assaults, the gang also did steal several jeeps, which of course would have been Willys MB's or Ford GPW's rather than the CJ-3B seen here.

Meanwhile, Gen. Mark W. Clark certainly had more important problems to deal with. The youngest Lt. General in the U.S. Army, he was heavily criticized for his strategic decisions in Italy, particularly sending the 36th "Texas" Division of the 5th Army into one of the worst U.S. military disasters of the war at the Battle of Rapido River, for which he faced a postwar Congressional inquiry.(8)(9) 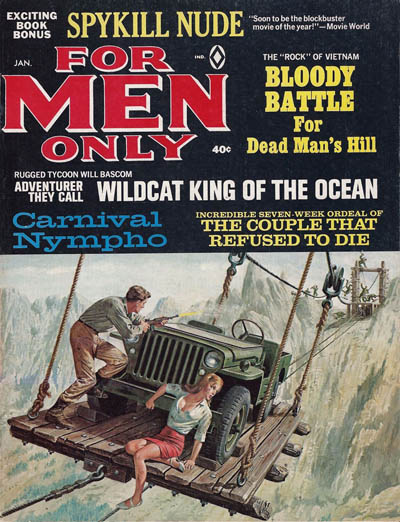 Künstler painted a Willys which was much closer to an MB, for the January 1967 cover of For Men Only. This scene was almost as amazing as the escape into the cargo plane: an escape across a gorge on a spindly transporter bridge, chased of course by a hapless group of soldiers.

The story was "The Incredible Seven Week Ordeal of The Couple That Refused to Die," but I don't know any more about it. In fact it's impossible to tell from the cover what any of the articles are actually about, with the possible exception of "Bloody Battle for Dead Man's Hill." 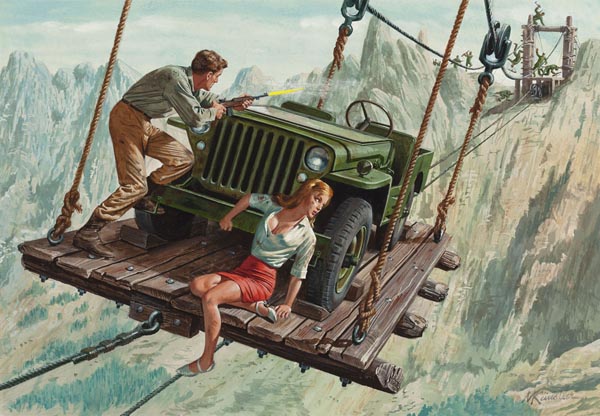 Our hero seems to be a very fast and accurate shot with his carbine -- see a large copy (370K JPEG) of the original painting "The Couple That Refused to Die."

Anyone run across any other Jeeps painted by Mort Künstler? His signature "MKünstler" can usually be seen in a bottom corner. -- Derek Redmond