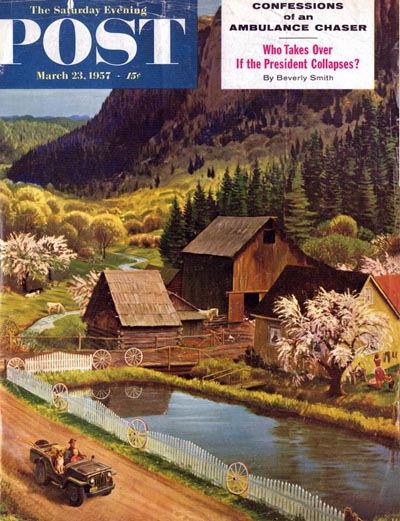 The news stand price of this 1957 copy of The Saturday Evening Post was 15 cents, and the cover alone was well worth the money. The painting by John Clymer is quite suitable for framing, and half a century later it's a nice reminder of why we think Willys Jeeps are worth keeping and restoring.

Clymer's depiction of a trip to the fishing hole with a youngster and a dog, gets to the heart of the American experience, just like some of Norman Rockwell's work for the Post. But he does portray a Jeep that never really existed in real life; the hood and radiator guard combine features of the CJ-3B with earlier flatfender models. It's similar to some illustrations in Willys advertising such as a 1953 ad in the Post, where the artists were perhaps encouraged not to show how high the new CJ-3B's high hood really was, for fear it would scare off people comfortable with the familiar old profile.

The editor, in his paragraph about the cover, mentions that Clymer reduced the number of wagon wheels that were in the real fence around the mill pond, and comments that "maybe he feared that if the thing had more wheels it might get moving in a high wind and roll down the pike lickety-toot. If a fence, while exceeding the speed limit, should hit an auto, who would sue what?" The joke is about as funny as most of the cartoons sprinkled through the magazine .

The editor also speculates about what life will be like in the 21st century. But rather than asking if people will still be driving Willys Jeeps, he expects helicopters will replace automobiles, and wonders if Jeep wheels will then be painted white and used to decorate fences.

I'm apparently not the only person who has done some nit-picking about details in those illustrations; in an interview in Walt Reed's book John Clymer, an Artist's Rendezvous with the Frontier West (Northland, 1976), Clymer commented: "There was only one drawback about doing covers for the Post. They went everywhere in the country, and because I picked and painted actual places, there would be several hundred people who lived nearby who'd scrutinize every detail to try to find something wrong. I had to be sure I knew all about everything included in a picture, and why it was there. There would always be someone like a telephone lineman who'd write in and say, 'I don't think that was the kind of insulator they used in that area.' The Post was good about those things. The only time I had to make a correction on a cover was when I sent in a picture that had an automobile in the foreground. I had completed everything, lights, chrome, trim, spokes, but forgot to paint in the door handle."

You can visit the Clymer Museum in his birthplace of Ellensburg, Washington. -- Derek Redmond 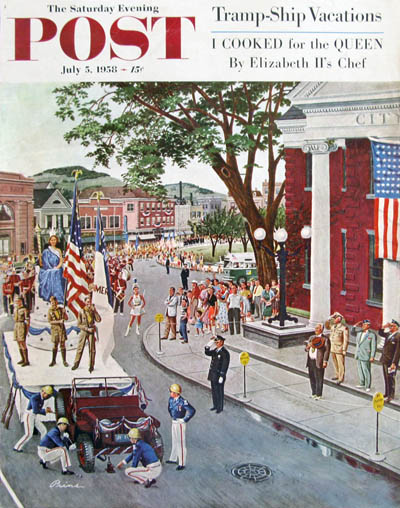 Ben Kimberly Prins (1902-1980) was another artists whose work frequently appeared on the cover of the Post. He liked to include vehicles in his scenes of idealized life in America in the fifties (see more examples in American Gallery) but this 1958 Fourth of July parade may be his only Jeep.

Again, it's almost a high-hood CJ-3B. It's painted in Bristol Red, which would date it as a 1954 model. But the windshield and the front grille shape would suggest a CJ-2A in Luzon Red.

Either way, this Jeep has seen years of use, judging from the bald state of the tires, and unfortunately one of them has gone flat. While the honor guard puts down their rifles and changes the tire, the parade stops and the dignitiaries are stuck saluting Old Glory.

The blue 1958 license plate, and the design of the City Hall, would suggest the town in the picture is loosely based on Ben Prins' home town of Wilton, Connecticut.

The Post's editor refers to it on the Table of Contents page, as the "Hillville City parade." He goes on to say that "Artist Ben Prins got this cover idea while watching the Eiesenhower inauguration parade last year: a dignitary stood up in his car to bow to Ike, but before he reached the reviewing stand, the parade stopped, leaving him standing up short of the mark with nothing whatever to do. The befuddled man's wife finally yanked him back into his seat by the coattails."

Ben Prins' grandson Bill Prins wrote in 2012: "My parents and I are actually models in several of his covers. I spent many hours in his barn studio in Wilton watching him mix colors and paint. Our family owns 5 covers, but back in the day, my grandfather would hand the painting to Curtis and they would hand him a check. Where these cover paintings ended up is anyone's guess." (American Gallery)

Anyone spotted other 3B cover appearances? -- Derek Redmond