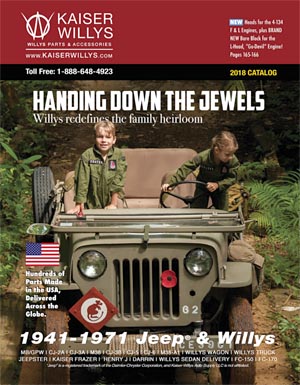 The 2018 Kaiser Willys Parts & Accessories catalogue cover features the winner of their 2017 photo contest. Andrew Coates photographed his 1960 CJ-3B and his children, in Panama. The desert rat on the front of the Jeep is in honor of Andrew's grandfather Colonel Coates of the British Army's WWII Desert Rats in North Africa.

You can order or download a copy from Kaiser Willys. 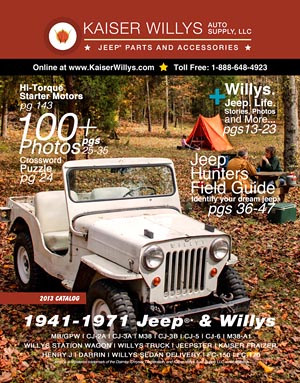 Pretty good record for high hood photographers since KW launched their glossy magazine-style catalogue and online blog around 2011. Todd Phelps' photo of his family's 1958 CJ-3B in North Carolina was the contest winner and featured on the cover in 2013.

Bob Christy's restored 1953 Willys CJ-3B was the first high hood to become a cover model for 4Wheel Drive Hardware's Vintage Jeep parts catalog, on the Winter 2011 edition (and again in Winter 2013!)  Here's Bob's story of how it came about: 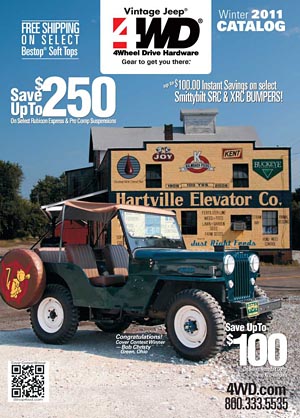 I have been taking my Jeep to the Spring Willys Reunion for a few years now. 4WD Hardware had some representatives down there handing out catalogs and keychains and such. I have posted information on their website about upgrades, and since the original 4WD Hardware store is only an hour away from me, I get there several times a year to purchase things, and go to their yearly show.

Anyway, the representatives from 4WD hardware that were at the Spring Reunion got a chance to see my 3B in person. I got an e-mail back in late June or early July 2010 asking me if I'd like my Jeep to be on the cover of their Vintage Catalog. I thought it was a joke at first until I called the person who e-mailed me, and he confirmed it.

We spent a month or so playing phone tag and deciding where to shoot the photo. 4WD wanted a vintage location to go with my Jeep so I scouted a few locations and we ended up agreeing on shooting it at the Hartville Elevator in Hartville, Ohio. I spoke with the owner of the business and he was happy to have us come and do it there. 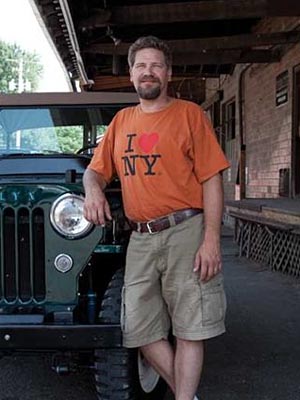 The shoot took a couple of hours. The guy from 4WD could not have been nicer. As a photographer, I kept a close eye on what he was doing, and felt bad for him because of the horrible light we had to deal with at the time.

It's a real honor to be on the cover of their catalog, and it's pretty much the dream of everyone who restores a vehicle to have it featured in a print publication. As a bonus, the honor came with a $500 gift card to spend at 4WD Hardware. I bought a few maintenance items, some brake parts, a steering box rebuild kit for a future rebuild, a new steering wheel, and parts to rebuild my brake pedal to get rid of the slop. 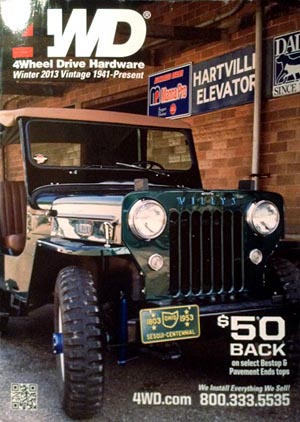 November 2013 -- my Jeep is on the cover again. This is from the same photo shoot. I guess they did not have time to shoot another one.

As an added bonus to my whole experience with 4WD, I hooked them up with Bill Norris and Kevin Banonis and they managed to sell quite a few of their Holy Toledo! Calendar to 4WD. -- Bob Christy