Like Willys Jeeps and trucks, Jeep trucks made later by Kaiser, AMC and Chrysler have seen use as emergency vehicles. One popular example is the 1-1/4 ton M715 military version of the Gladiator truck. Kaiser built over 30,000 of these starting in 1967, and many of them were made available to fire departments at little or no cost when they were disposed of as military surplus. The M715 had a Dana 60 front axle and Dana 70 rear, and many departments converted these 4x4 units for brushfire control. 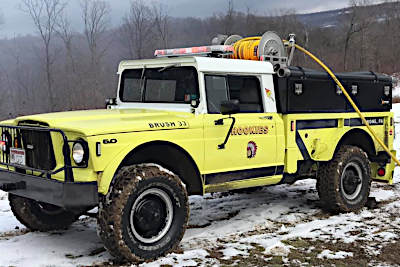 Brush 33 at Hookies Fire Company in Tyrone PA is a beautifully maintained and still active 1967 M715, and is seen here at an off-road structure fire on 18 January 2021. 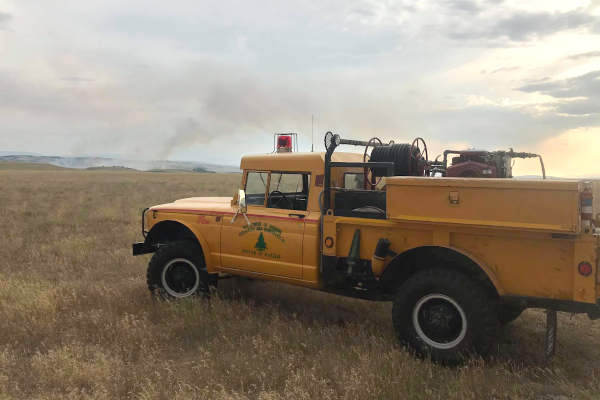 Here's another of these old 5/4-ton trucks which can still be activated when necessary. Kevin Langhus took this photo of a Montana Forestry M715 in August 2020. He says, "The Jeep got released from parade duty to do some work during a lightning bust. Five fires by the end of the day." 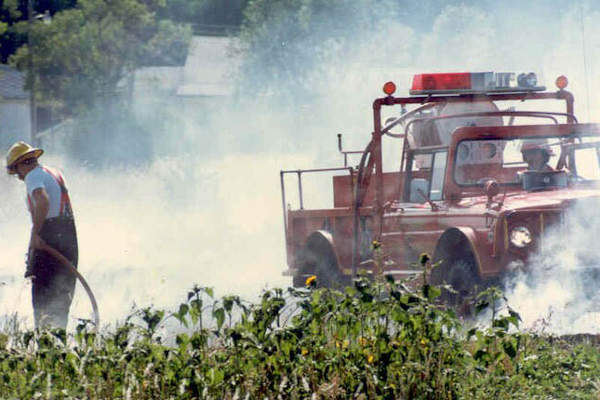 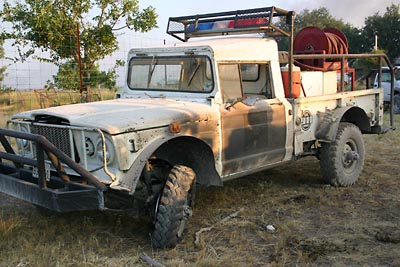 Cecil Conner, Chief of the Kimble County Ranch Fire Assn. Fire Department wrote in 2005, "Our workhorse Unit 84 is a good truck. Last month four other firefighters and myself were involved in a firestorm and a wildland flashover. The oxygen was sucked out of the air and the M715 died. The crew went back into the burned area and although they were burned they survived. I was in a truck ahead of them (fuel injected) and was able to get out. When I returned I found the truck on fire. I called in another truck with me and I had them put the truck out while I located the crew. The area was still unstable when we left. I crawled behind the wheel and drove the old horse right out to a staging area. We will be repainting and refurbishing the truck soon."

Kimble County Ranch Fire Unit 84 is a 1968 M715 operated by the Junction Volunteer Fire Department in Texas. Junction VFD Chief Lee Hall says, "The Jeep has a 350 V-8 Chevy engine. After replacing six overhead cam engines, we put this V-8 in it. Bought the conversion kit from a company in California. This truck was obtained through the Texas Forest Service and it is a surplus truck. It has been a real workhorse and has been on way too many fires to even count. We have already discussed that when this engine goes we may look at putting a small diesel engine in it."

It's likely that some of those six OHC 6-cylinder engines were the troublesome version used in the early 1960s civilian trucks, rather than the improved version used in the late-60's Kaiser military trucks, which had a better reputation. But the fact that Junction was willing to do that much work on their M715, illustrates how valuable these trucks have been to their owners. See the photo that was posted here on CJ3B.info before the incident (30K JPEG).


More M715s Across the Country 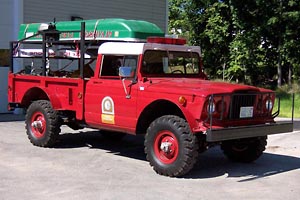 Here's something a little different: this buck-and-a-quarter still in service as of 2006 with the Atkinson, New Hampshire Fire Department is on the roster as Forestry 1, but is also set up with boats for ice and water rescue. See a nice big copy of the photo (170K JPEG). 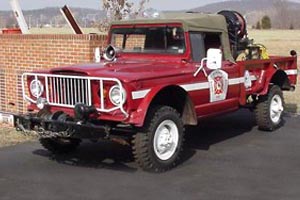 Unit 2438 of the Eureka Fire Protection District, southwest of St. Louis, Missouri, is a 1967 Kaiser Jeep. According to their website, "This excellent piece of apparatus has the ability to go where most brush trucks won't. Through strict maintenance and diligent care, this truck is still running strong on a daily basis." The EFPD knows what they are talking about when it comes to fire and rescue operations in difficult terrain. They also maintain an Equine Search and Rescue Team, which utilizes personnel on horseback for locating and accessing missing or injured persons in areas inaccessible to vehicles, and a Technical Large Animal Emergency Rescue Team for dealing with animals such as horses who may need to be rescued or extricated. 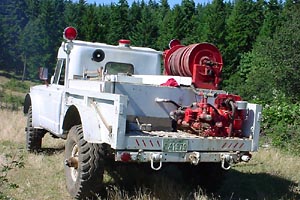 Donald Cox says, "I have a 1968 Kaiser Jeep Fire Truck, in the process of restoration. I used it last year as fire protection on a logging job." 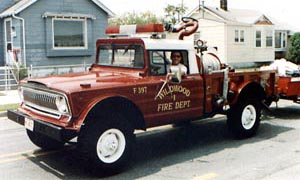 Despite their name, the Wildwood City Fire Department's biggest challenge is not finding a unit to deal with brush fires, but one to deal with the narrow access ways in the large boardwalk area along their oceanfront in New Jersey. Several Jeeps have been their solution over the years, including this M715 which is now retired. Unit 397 carried a deck gun, as did their later Scrambler. 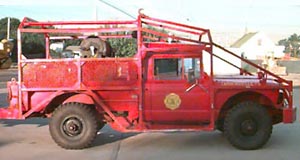 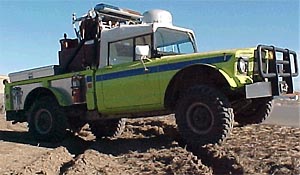 Brush 1116 of the Dzilth-Na-O-Dith-Hle Volunteer Fire Dept. is a 1968 M715 that's ready to tackle anything in their large service area in San Juan County, New Mexico. Dzilth-Na-O-Dith-Hle, pronounced Zith-na-o-dith-hlee, is a Navajo word meaning mountain that turns, or mirror mountain. This sandstone mesa, the center of the Navajo nation, rises more than 600 feet over the surrounding area. 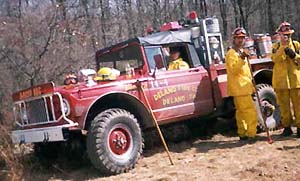 The Boles Fire Protection District in Missouri had two 1968 Kaiser Jeep trucks, Brush Rig 516 (in the photo) and Brush Rig 546. Both carried 250-gallon tanks and 8 GPM pumps. They are now retired. 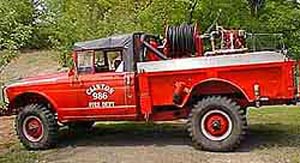 Clinton Volunteer Fire Department in Connecticut received their 1967 truck, Unit 986, from the Town Highway Department. The VFD equipped it with a skid-mount tank and pump, a two-ton winch on a custom built front bumper, and a full complement of forestry tools. 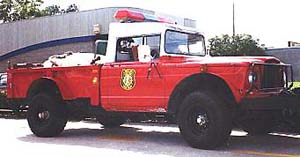 The M715 was supplied to the military with soft top and folding windshield, unlike the civilian Gladiator. This nicely done hardtop conversion, with plastic water tank added, was in service with the Westlake Volunteer Fire Dept. in Houston, Texas from their founding in 1975 until 2000. See also a front view (50K JPEG).

Union Bridge Volunteer Fire Company's Brush 85 in Carroll County, Maryland is a 1968 Jeep. It's the first unit out on all wild fires and is sometimes called out to special assist on barn fires. In 2000 Brush 85 got a new 250-gallon tank and new motor. See a left side photo (80K JPEG) taken prior to the refit.

Alfred Heibert spotted the forestry truck of the Oakdale, Connecticut Fire Department. It's a 1968 Jeep with a 175-gallon tank, and it looks great in classic open-cab style.

Warriors Path Volunteer Fire Department in Kingsport, Tennessee has a pair of military surplus brush trucks -- a 1953 Dodge Power Wagon and this 1967 M715 Gladiator. Brush 9 carries equipment including chain saw, blower and rakes, in addition to the tank and pump.

The M725 Ambulance is another version of this truck.

Elsewhere on the web, see the M715 Zone website.