Not all fire service Jeeps are old. Here are a few examples of more recent Jeeps in use around North America (and the world.) 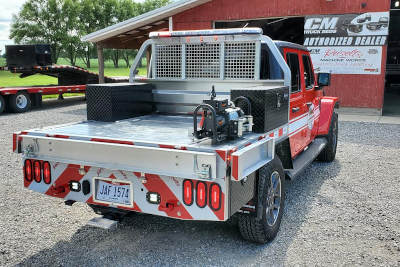 Reiselt's Machine Works in Radnor, Ohio built this brush truck platform, based on the JT Gladiator, the pickup version of the JL Wrangler. In this case they went with a utility bed rather than a pickup bed, to carry a skid-mounted pump. But the big advantage of the JT is for a department that wants a brush truck ready to carry a crew of five. See a right side view (270K JPEG). 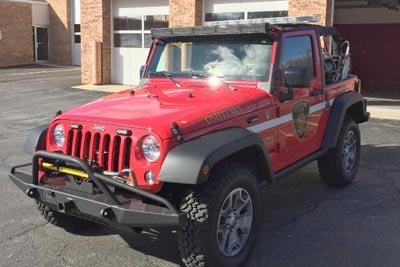 Brush Truck 573 is in service with the Oshtemo Township Fire Department in Michigan. This unit, with 5000-pound front-mounted winch, carries 75 gallons of water and a small pump, plus four portable water backpacks. It responds to all brush/grass fires in the township. 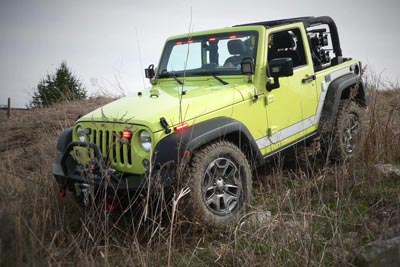 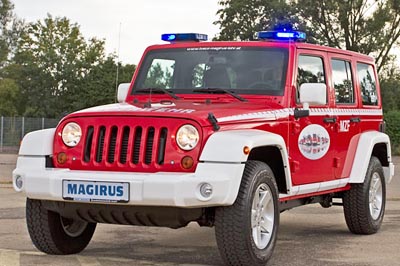 When German apparatus manufacturer Magirus wanted a small MZF (MehrZweckFahrzeug or "multi-purpose vehicle") to round out its range of state-of-the-art trucks in 2013, they chose the JK Wrangler with a 2.8-liter common-rail diesel. Their MZF is loaded with fire extinguishers, jacks, medical and rescue gear. After using this original MZF as a demonstrator for three years, it was sold to a Slovenian fire brigade in 2016. 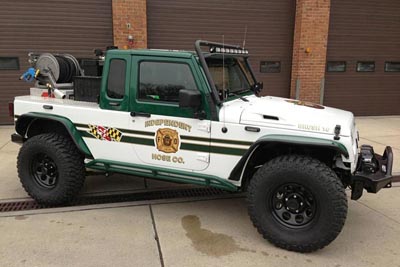 Independent Hose Company No. 1 in Frederick, Maryland, is the state's oldest volunteer fire company, officially organized in 1818, when the color green was adopted. Their state-of-the-art 2013 Wrangler with the Mopar JK-8 conversion, replaces their old Brush 16 which was a surplus 1967 M-715 (200K JPEG, photo courtesy Duncan Henry.)

The Jeep carries 74 gallons of water and 10 gallons of foam, and has an Ultra High Pressure pump.

Brush 16 features Smokey on the hood and doors, just like another JK-8 in Minnesota. 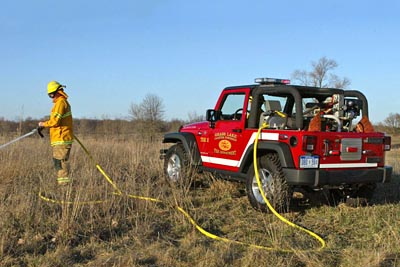 Grass Lake, Michigan has this Rubicon as their Truck 2. GrassLakeRon commented in an interesting discussion at JeepForum.com, "It doesn't even slow down over rough terrain. The last time I saw it was cruising across a farmer's field at 40 mph to a brush fire. The Jeep they used before that, was a CJ-6 with the V6." 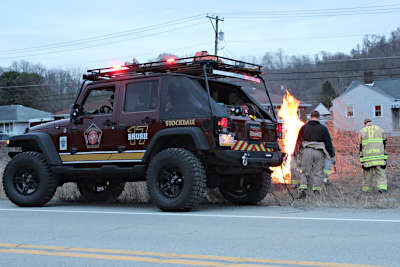 As of April 2021, Brush 17 has been retired and is being raffled (without the skid unit) -- see Facebook. 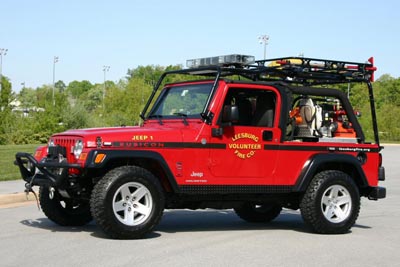 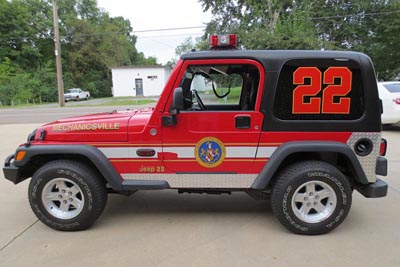 As of early 2014, the Mechanicsville Volunteer Fire Dept. in Maryland was selling a 2005 Jeep Wrangler Sport Brush unit, equipped with: 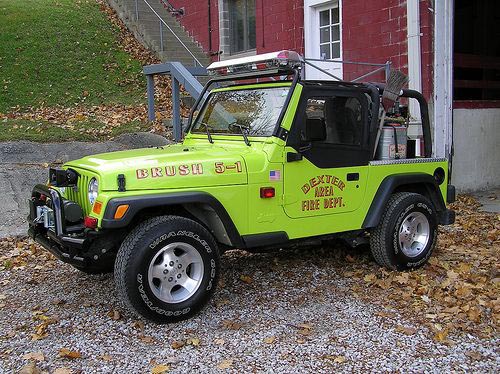 Brush 5-1 of the Dexter Area Fire Department in Dexter, Michigan, is a 2001 Wrangler fitted with a Honda pump. It also carries Indian backpacks and an 8000-pound winch. 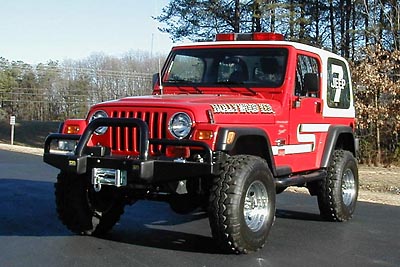 Jeep 7 of the Hollywood, Maryland VFD is a 1999 Jeep Wrangler graciously donated by the Ladies Auxiliary. The Jeep was supplied by Allsafe Fire Trucks, Inc. in Maryland.

See also a rear view of an Allsafe TJ conversion (50K JPEG), and a photo of the tailgate open (50K JPEG). 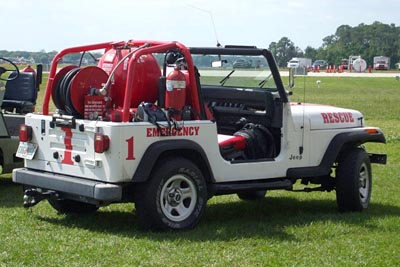 This YJ Wrangler serves as Rescue 1 at the Fantasy of Flight airfield in Polk City, Florida. "Fantasy of Flight" is the world's largest private aircraft collection on display, and became the new home for much of owner Kermit Weeks' collection of aircraft from the Weeks Air Museum in Tamiami FL after they were damaged by Hurricane Andrew in 1992. As of 2015 a scaled-down version of the amazing museum is open during the winter, while the rest of the facility is upgraded for reopening in a few years.

The only other example I've seen of a spherical pressurized dry chemical system like this, is on a Gendarmerie crash Jeep in France (see Police Service Jeep Toys.) 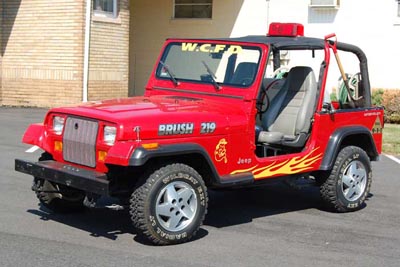 Winchester Community Fire District in Winchester, Ohio set this YJ up with a 50-gallon tank. 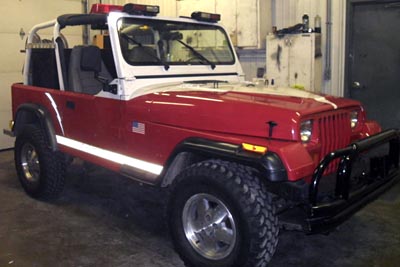 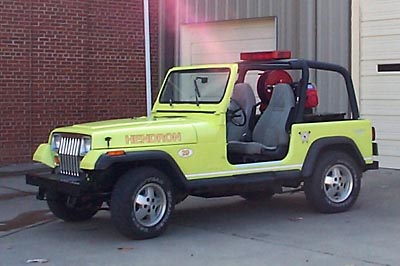 Unit 29 of the Hendron, Kentucky VFD is a 1992 YJ, also converted entirely by members of the department. It has an 80-gallon tank and Hypro 12V DC Pump which provides 10 GPM at 65 PSI, through 75 feet of 1/2" hose. Neighboring departments have seen it in action and been impressed, so maybe it will start a trend. The Hendron VFD also has a surplus 1968 Kaiser Jeep M715 as a brush truck. 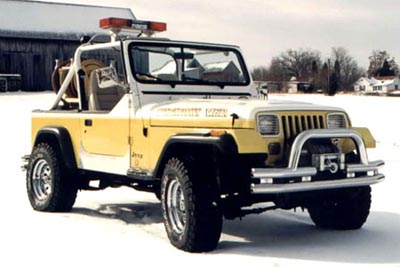 This Wrangler was turned into a brushfire truck serving Calvert County, Maryland, by the Huntingtown Volunteer Fire Department, whose funding sources include an annual vintage Corvette raffle.

Lieutenant Jon Riffe comments, "We had two other Jeeps before this one. One was from the 40's but did not run anymore. The other one was from the 50's and was solid as a rock. Its time had passed and we decided to replace it. We bought the 1990 Jeep from a guy in Pennsylvania, and at the time it was a regular blue Jeep. We lifted it, bought new tires, did some engine work, sprayed the interior with a bed liner, hooked up lights, bought a small water tank with an electric pump, and painted it yellow (like our other apparatus.)

"We placed it in service in the summer of 2001, and it has been very busy with all the woods fires we have had. It is excellent in the woods because of the small size. We have saved several acres in the County because of it and are pleased."

Thanks to Randy Harris of the Hendron VFD, Jon Riffe of Huntingtown, Steve Facini of Hollywood, Kyd Dieterich of Allsafe, and Dale Jonas for spotting fire Jeeps on the web. -- Derek Redmond

Last updated 8 May 2021 by Derek Redmond redmond@cj3b.info
https://cj3b.info/Fire/FireWranglers.html
All content not credited and previously copyright, is copyright Derek Redmond