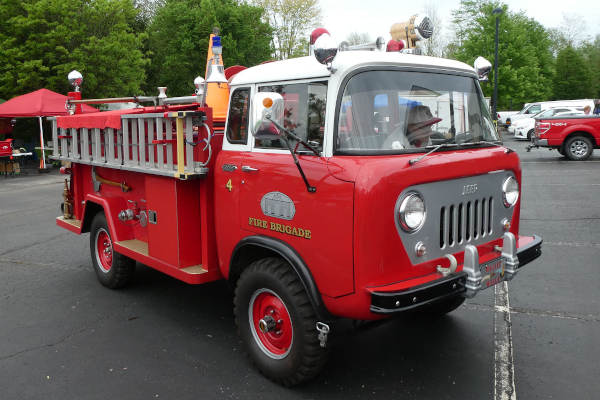 Valley Fire Truck Co. of Bay City, Michigan built this nice 1965 truck, restored by Andrew Harvey of Pennsylvania. He added some touches which are not original to this Forward Control FC-170, including the bell, bumper guards, and 1950s-style glass lenses in the front parking lights.

As of 2019, the truck was sold and is now part of a private collection in Houston. (See the bottom of this page.) 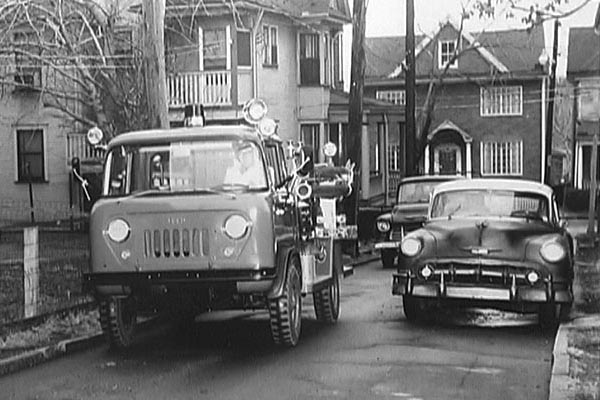 The same truck is seen here shortly after delivery to Wilkes-Barre, Pennsylvania as Pumper 4. It served as the primary responder for 11 years in an area with many streets and alleys too narrow for a full-size engine, and was finally sold as surplus in 1992.

The story goes that the little pumper was bought after four children died in a fire which the larger pumpers could not reach due to parked cars. Citizens were outraged and the city council told the Fire Chief to find something that would solve the problem. 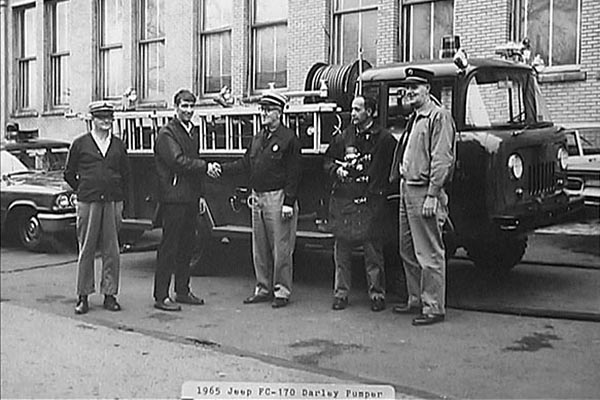 The FC-170 is believed to be the last Jeep FC conversion done by Valley. In a photo of the delivery day ceremony (60K JPEG) on December 28, 1964, it is labelled as a "Darley Pumper." Valley was connected with W.S. Darley of Chicago, and this truck has a Darley Champion 500 GPM centrifugal pump. 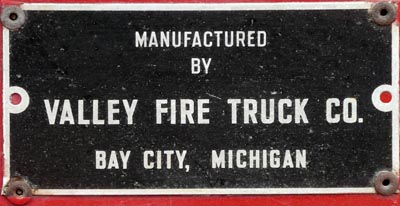 It carries a Valley builder's plate on the left side just below the pump controls, and a Champion Pump serial number plate (140K JPEG) from W.S. Darley & Co. on the discharge manifold.

Valley also used the "Champion" name for its pumper built on the Willys pickup truck chassis. 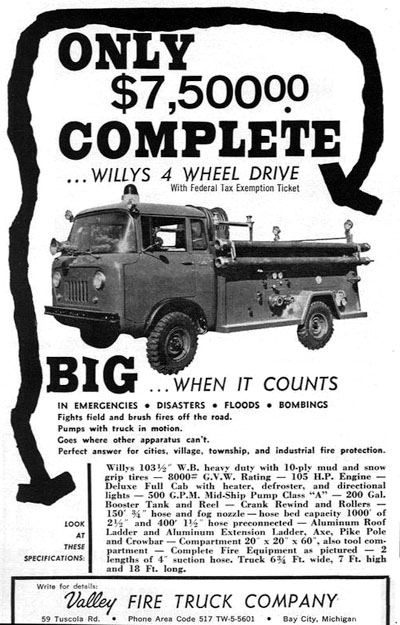 The company apparently built only a small number of FC conversions, although they did promote them aggressively, as seen in this advertisement with specifications including 500 GPM Class A pump and 200-gallon booster tank. Maybe they were shooting for the Civil Defense market, since they recommend the truck for "emergencies, disasters, floods, bombings!"

The ad also mentions an 8,000-pound GVW rating, which was achieved by "plating" the frame to reinforce it. The truck is powered by a 226 Super Hurricane flathead engine. 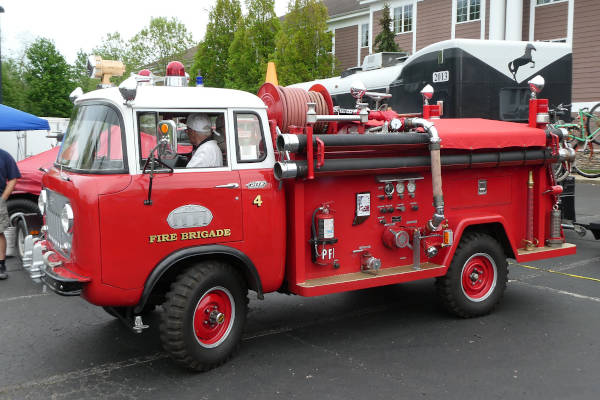 The Wilkes-Barre (Wilks-berry) lettering was removed when the FC-170 was sold to a scrapyard. It was soon rescued, repainted in white and red (with aluminum grille), and purchased by Andrew in 1999. 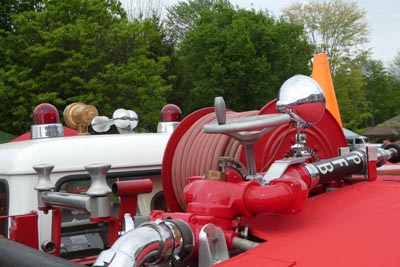 The deck gun was added, as were additional beacon lights front and rear.

These photos were taken at the Spring Willys Reunion 2018. 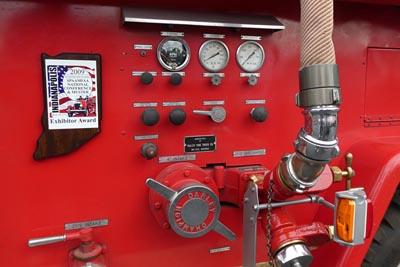 The deck gun is supplied from the 2-1/2" side discharge. 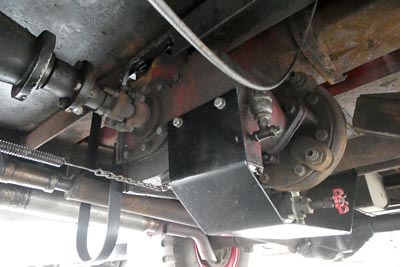 The pump is powered from the center PTO, and is protected by a skid plate installed after the drain plug was replaced with a ball valve. A safety loop was also added around the driveshaft. 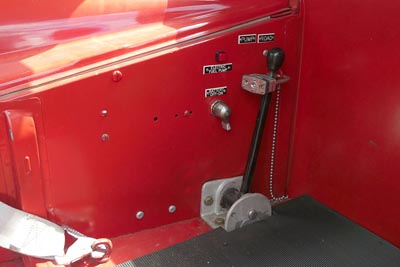 An interlock lever behind the driver's seat prevents operating the pump while driving. Andrew added the lock, and the electric fuel pump and battery disconnect switches, and his latest project in the cab (400K JPEG) is a visible brake fluid reservoir on the dashboard. 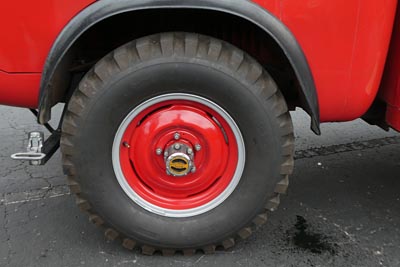 The original wheels were 15-inch split rims, well suited to the heavy truck. But Andrew found he could no longer obtain 7.50-15 tires, so he installed 16-inch wheels, with 7.50-16 military NDT tires. 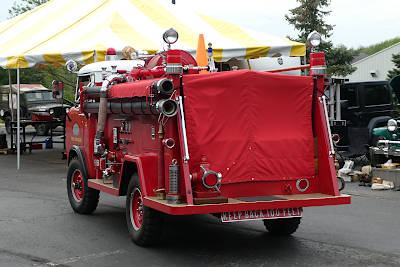 A custom tarp was made to protect the 2-1/2" hose loaded in the bed. 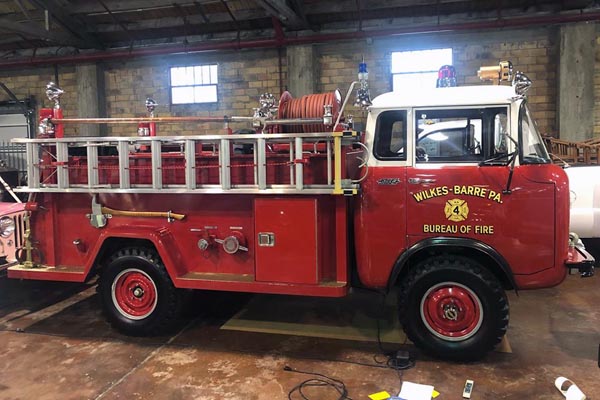 As of 2019, the truck has been sold to a new owner in Houston, and has been lettered once again as Wilkes-Barre Pumper 4. Other details changed to bring the truck closer to its original as-delivered state include removal of the front bumper guards. 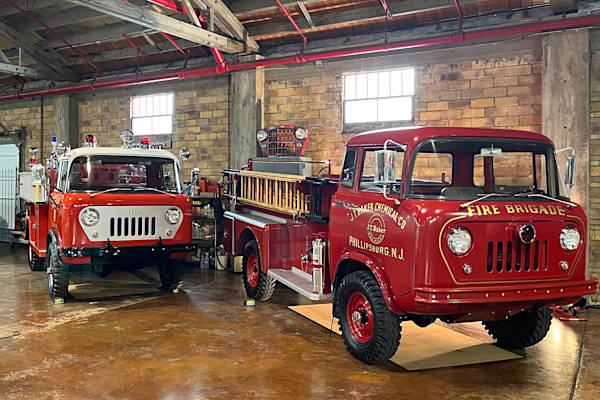 In the collection, Pumper 4 has a spot beside the newly-restored Hahn Motors FC-170 Fire Engine built in 1963 for J.T Baker Chemical Co.


Thanks to Andrew Harvey for his assistance. See more photos of the pumper at the Spring Willys Reunion 2018. -- Derek Redmond