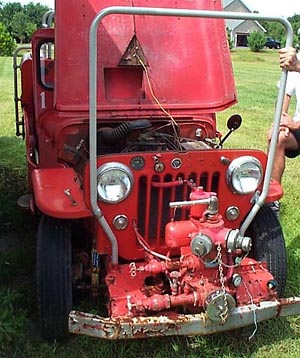 Almost as prominent as the front-mounted Barton pump in this photo, are two distinctive features of the CJ-3B fire engine hood: the triangular reinforcement for the siren mount, and the square indentation cut into the hood to accommodate a raised carburetor. 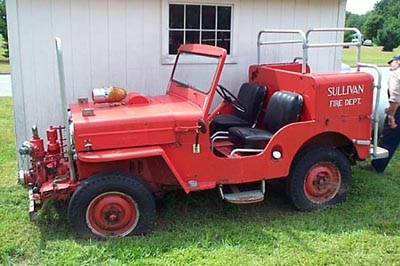 From the outside, the bump in the hood is visible hiding behind the rusty but intact siren. The original ladder rack is still attached, but most of the other body-mounted equipment is gone; see also a rear view photo (35K JPEG).

Bill notes that the Jeep has been converted to 12 volts, and also mentions the Motor Wheel rims with silver-painted stripes, slightly different from the Kelsey-Hayes rims. The tires are original 8-ply rated for 60 PSI. 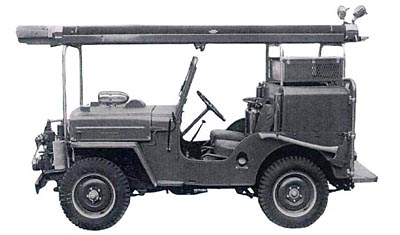 The bump is clearly seen in this photo found in a Willys catalogue of Jeep Specialized Vehicles and Equipment, which also gives these pump specs: "Powered by the world-famous Hurricane Engine, the centrifugal pumper discharges 500 gallons per minute at 120 lbs. pressure when drafting from a lake; or 550 to 600 gallons per minute when drafting from a free-flowing hydrant. When pumping from the tank trailer... the pumper develops up to 300 lbs. pressure discharging highly efficient fog or straight streams from the tank hose reel."

In a retouched factory photo of Jeep and trailer (70K JPEG) found in the late-1950s Willys booklet Jeep Vehicles in Public Service the bump in the hood was perhaps removed by airbrushing. 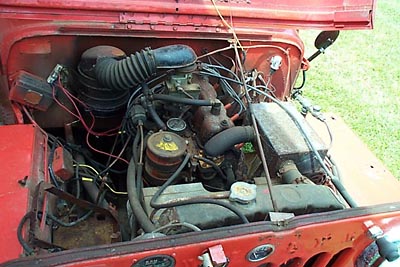 A look at the engine reveals the reason for the bump in the hood: an extension approximately 2 inches high, mounted below the carb (50K JPEG) raising the air cleaner horn too high for even the CJ-3B hood to accommodate it without some cutting. A fitting on this extension attaches to a line which Bill speculated was for priming the pump. It turns out its function is as a governor, to reduce engine speed when pump pressure gets too high.

An auxiliary radiator reservoir provides additional coolant capacity for extended pump operation. The throttle cable has been removed from the dash and rerouted through the front grille for use when operating the pump. 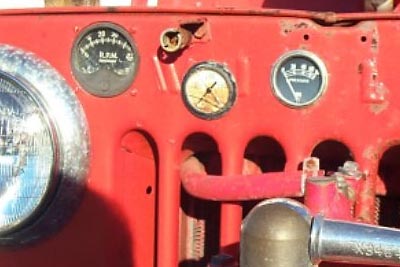 The grille also holds a factory tachometer connected to a sending unit (30K JPEG) mounted on the firewall. Additions include an oil pressure gauge, and the temperature gauge moved from the dash, as well as a socket for a light to assist the operator. 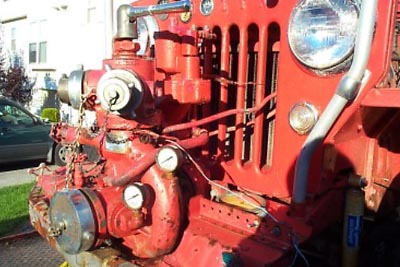 Input and output pressure gauges are mounted on the pump itself. See also the right side (50K JPEG) and the rear of the pump (50K JPEG). The round bracket on the bumper behind the pump, holds the filter for the business end of the suction hose.

Thanks to Bill Oakes for the photos. -- Derek Redmond