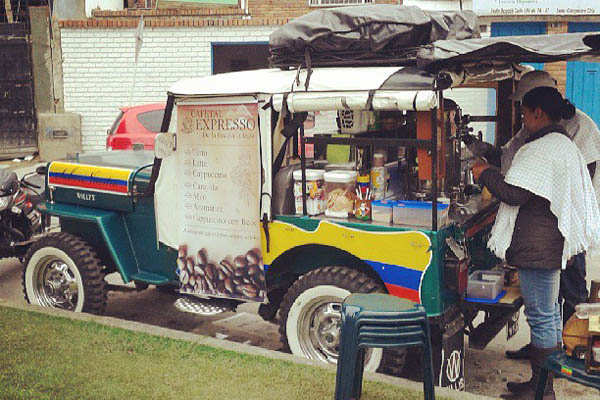 Willys Jeeps, particularly CJ-3Bs, are still used to transport coffee beans and other produce to market in the Zona Cafetera of Colombia.

Jeeps are of course also seen across the country serving as mobile coffee shops. Thanks to Diego Mogollon for this 2013 photo of one of the many coffee Jeeps in Bogota. 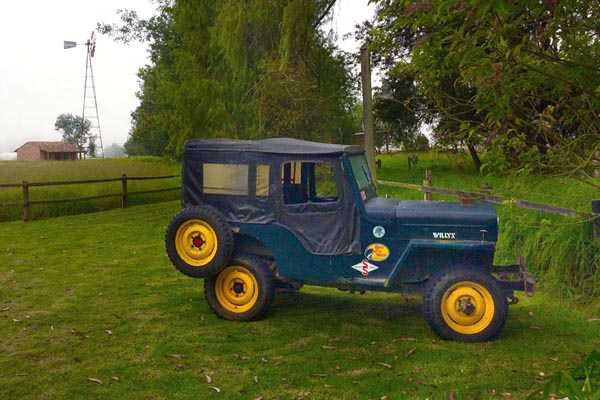 So, when Sergio Arango had the whole family out for a party at his farm near Bogota, the kids saw his 1954 CJ-3B looking lonely out in the back yard... 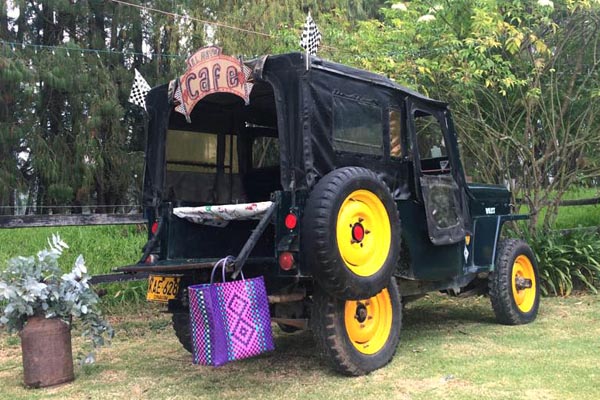 ...and decided it would be the perfect place to set up a coffee shop, called El Arpa Café ("The Harp Café"). 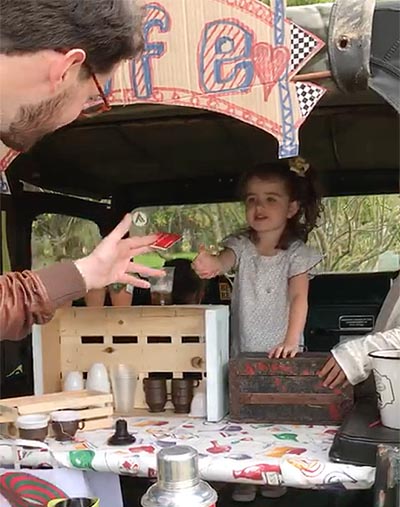 And El Arpa is a very up-to-date operation -- they even take plastic! 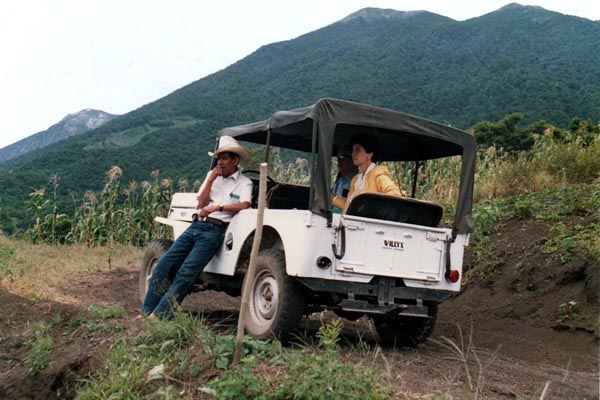 Colombia is not the only place where Willys Jeeps work on coffee plantations.Pedro Echeverría wrote from Guatemala, "I am repairing and fixing our old Jeep, which gives all my family great memories."

This great 1987 photo shows Don Rafa with the 3B at La Tacita farm, which has been growing coffee since 1890.

Pedro also sent this picture taken about 1992, and says, "We had it working until 10 years ago in our coffee farm in the Antigua coffee region of Guatemala."

See also a photo of two 1953 CJ-3Bs, perhaps including this very Jeep, arriving by ship in Guatemala, in CJ-3Bs for the World. 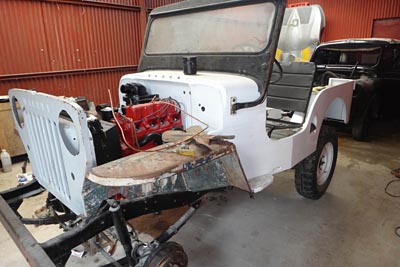 "Now we are putting him alive once again! This Jeep has been in the company since the late 1950s and it has gone through various colors. The serial number plate reads Willys Overland, serial number 453GB2 14349, Toledo, Ohio, U.S.A. I am installing a Hurricane engine from another model." 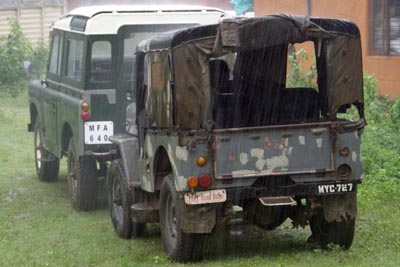 The monsoon rains are the secret behind the coffee grown in southern India, which as a result is known as "Indian monsooned coffee". The village of Dabguli is south of Bangalore, in the state of Karnataka, which grows more than half of India's coffee ( Wikipedia). Dabguli is where Amrith Punja found his 1964 Mahindra-Willys in 2009. 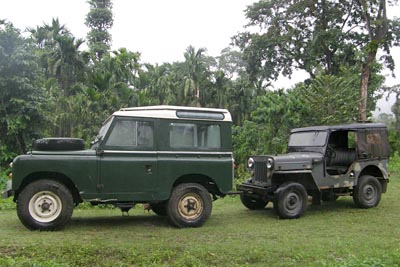 Amrith lives in Bangalore, and told CJ3B.info, "I have been a hardcore fan of Willys ever since I witnessed an offroad rally. Have been searching for the last six years for one, and never could find one, or it was beyond my budget. But to my pleasant surprise I found out that there was one in the family, with the original Hurricane F-head petrol engine. My uncle who is a coffee planter had inherited this Willys CJ-3B from my grandfather. He wasn't aware that I was desperately looking for one, and I wasn't aware that he had one, since it was parked in a closed garage (100K JPEG) for the last 18 years." 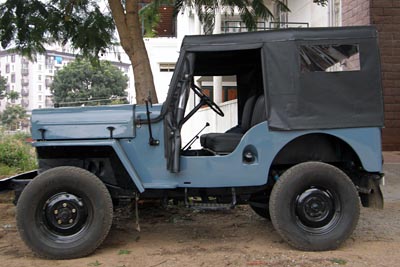 A year later, Amrith sent photos of his completed restoration of the 1964 Jeep. Although it is almost identical to a Kaiser Willys CJ-3B of the same era, the dashboard layout (170K JPEG) and the builder's plate on the dash reveal its Indian origins. Interestingly, Mahindra used the same 8105 serial number prefix adopted by Kaiser Willys in 1964. This Jeep's serial number is 38834-M.

See also the engine compartment before (160K JPEG) and after restoration (200K JPEG). 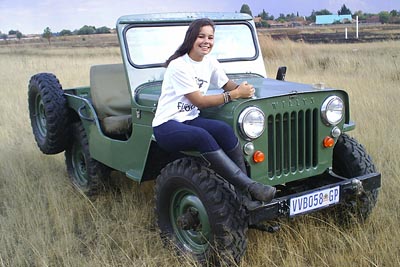 Thanks to Paul Horn of Benoni, South Africa, who took this photo of his daughter with his nicely restored 1956 CJ-3B. The Jeep is part of his substantial collection of classic cars, which also includes a 1958 Austin Gipsy (200K JPEG).

There are a couple of other South African 3B's on CJ3B.info, belonging to Simon Bruton and Jens Buus. And on the CJ-3B Serial Number and Engine Number List it appears that a batch of over 70 Jeeps may have been shipped there in 1962.

This South African 3B belongs to Arno Bosch, who reminds us that "the Willys Jeep CJ-3B is a rare sight here in South Africa. We bought this one from an army auction in the 70's. Apart from a few gauges which the army added, and the seats that we cannot buy due to lack of Jeep parts here, it is stock standard. The serial number isn't known -- as you can guess, it was the army's fault due to manhandling the Jeep."

A 1960 Jeep photographed by Simon Bruton may also have originally been purchased for the Defence Force of the Union of South Africa. Owner Pierre Joubert was told by the South African War Museum in a letter dated 6 October 2003: "In 1960, 25 CJ-3B Jeeps were ordered as well as 61 of the more modern CJ-5. Of the total 88 ordered, only 85 were delivered at first, the rest arriving at a later date. In about 1963/64 the SADF purchased 109 CJ-6 Jeeps." -- R Henry, for Chief Curator J L Keene.

Didit Purnomo inherited his 1956 Willys from his father who was a doctor in the Indonesian Air Force.

The big tires are Opel Blazers on CJ-7 wheels, but Didit has since switched back to 16" wheels with 750R16's due to the front tires rubbing. The reflective hood number that stands out in this nighttime photo is Didit's membership number in the local Yogyakarta American Jeep club. 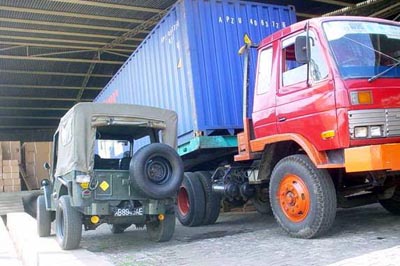 A Jeep is handy not only in the jungles but also in the crowded streets and alleys of Indonesia. Didit snapped this photo of his 3B beside a colorful container truck. See also a front view (50K JPEG). 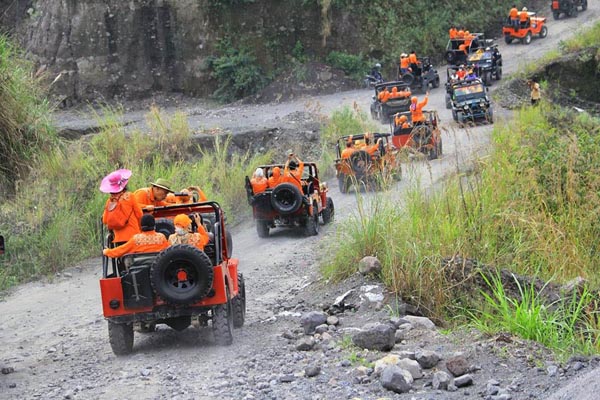 You can take a Willys Jeep tour to the top of a volcano in Indonesia. There is also a museum commemorating a village destroyed and over 300 people killed when Mount Merapi erupted in 2010. See more details in Volcano Watching in a CJ-3B.


From Spain to Peru 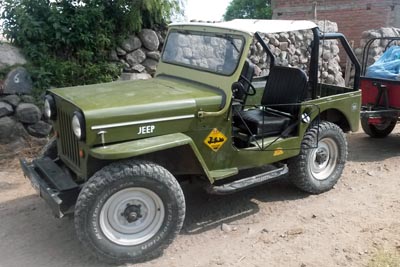 Speaking of volcanoes, this Jeep built in Spain now belongs to Guillermo Postigo in the city of Arequipa, Peru. He says, "I have a nice Jeep Viasa CJ-3B made in 1971 in Spain. It was a military Jeep for many years in Perú and after many owners is mine since January 2013.

"I have worked a lot on my Jeep to put it in good condition. Also I have enjoyed driving it in all kind of terrain using the double traction and gear reduction, with family and friends." 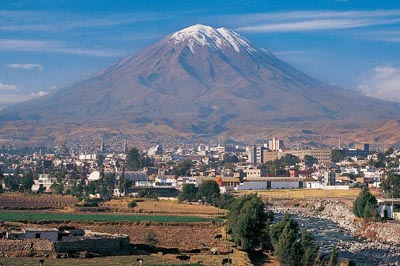 A Jeep is probably a good investment in Arequipa. The beautiful city of almost a million people sits at the foot of the active volcano known as Misti, which was reported in January 2016 to be showing signs of renewed eruptive activity. Photo courtesy Turismo Peru. 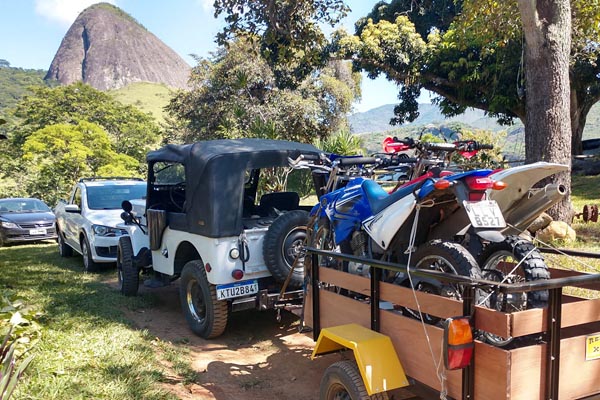 Ricardo Ferreira Garcia lives in Campos dos Goytacazes on the Brazilian coast, not far from Rio de Janeiro. He bought this former military police Jeep in the summer of 2018, rebuilt the motor and put it right back to work.

The 1954 Willys 3B is seen here pulling the bikes to Cachoeira de Rio Preto ("Black River Waterfall"), a popular hiking and biking spot 45 minutes west of Campos. The challenging-looking hill in the background here is known as Pedra do Peito de Moça ("Maiden's Breast Stone").


From Spain to Italy 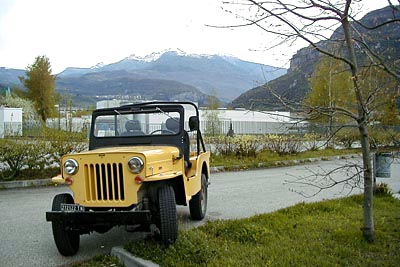 Seen in the mountains of northern Italy, Alessandro Pedrotti's Jeep is a VIASA Jeep built in Spain: its serial number plate (20K JPEG) indicates it was built by CAF ("Construccionesy Auxiliares de Ferrocariles", the parent company of VIASA) under licence from Jeep International Corp. The model is given as "PECJ3B", indicating a Perkins diesel. 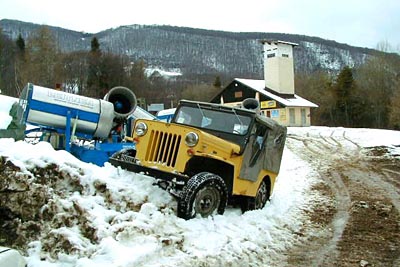 What do you do when the snow-making machine gets stuck in the snow? Call on a Jeep to go in and pull it out. Somebody has to do the hard work to keep the ski bums happy. 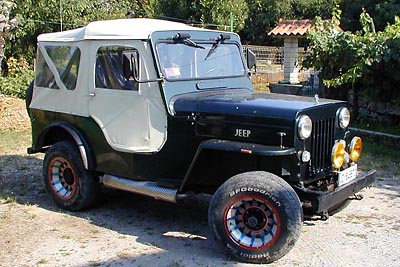 Also in Italy, David Zidaric bought this VIASA CJ-3B, to go with his long-wheelbase VIASA CJ-6. The serial number plate identifies it as "BACJ3B" (indicating it is powered by a Barreiros diesel.)

David writes, "For normal driving I use BF Goodrich T/A Radial (235/75) tyres, mounted over 15" BWA (Italian-made) alloy wheels. Offroad I use 7.50/16 mud tyres over original steel wheels. The use of radial tyres, free wheel hubs, power steering, and the minimum weight of the soft top, make driving this Jeep over normal roads easier than my CJ-6. Offroad it's better than the CJ-6, thanks to the short wheelbase and high diameter wheels. 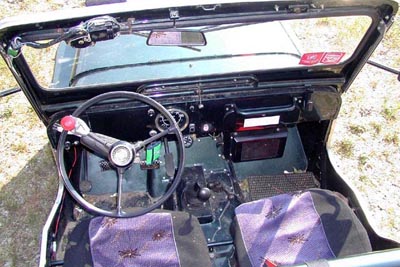 "The Jeep has been modified by the previous owner. The Spanish-made T18 transfer case is modified to use low range without shifting into 4WD. A locker is mounted In the original Dana 44 rear axle. The front end has a Spanish-made Dana 25 axle. It has a Bendix power braking system with Pierburg vacuum pump, disk brakes and free wheeling hubs on the front wheels, ZF power steering, Bestop Dualmatic soft top and VW Golf seats."

Thanks to all the photographers. See also Universal is Right! High Hoods Everywhere. -- Derek Redmond