Rain and Sleet and Snow and... 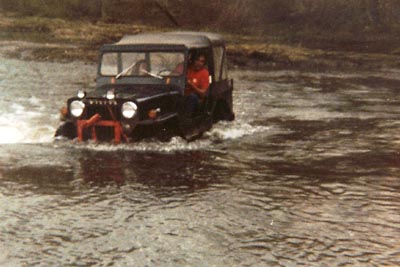 Steve Scherer in Suffern, NY has been driving his 1954 CJ-3B through every kind of weather for many years, and has the photos to prove it. He says, "I have been the owner of this Willys since 1976. When I purchased it the color was dark blue, and the only thing to keep your feet in were heavy rubber mats. I got it from a gentleman who used it to go back and forth to work -- said it was wrecking his kidneys! I'm not sure how many owners there were before me, but I suspect a lot." 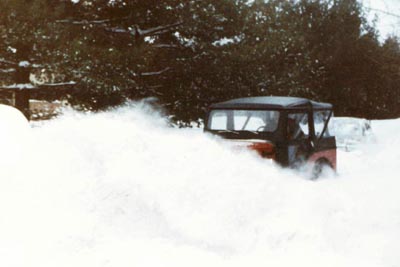 "The snow pictures are from a 2-foot blizzard in 1983. Around 1980 or so I did a little work on the body and electrical system. There were many layers of paint; I think the original color if I remember was green or yellow. I roughed in some floor boards and painted it red. Well, it's just about time to start thinking about another restoration, this time from the ground up!" 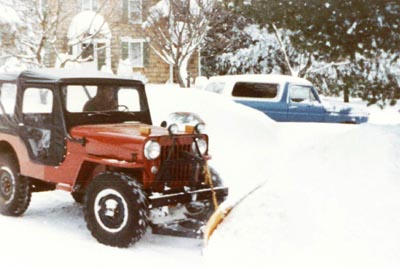 "Notice the vehicle that's doing all the work.... That's right, the '54 Willys, while the '78 Ford Bronco sits in the street -- it didn't want to attempt getting in the driveway!"

Thanks to Steve for the great action shots. 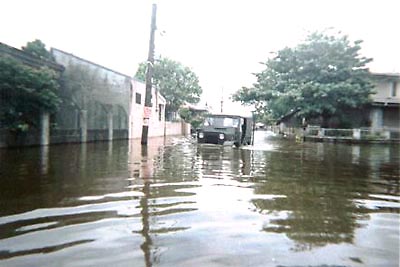 And then the tide comes in: the Jeep in the water is Edwin Go's Mitsubishi J24A, carrying him through some flooding in the Philippines. See Mitsis Get Around for more on Edwin's Jeep. 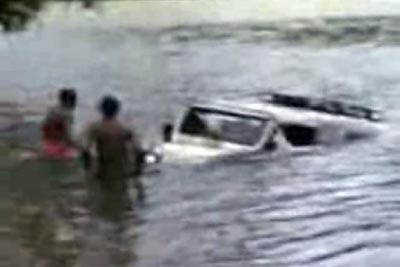 Not sure if this incident in India was due to flooding, or just some foolhardy driving. The whole successful effort to recover this long-wheelbase Mahindra was caught on video -- see Fishing for a Mahindra (1.4 MB QuickTime movie). 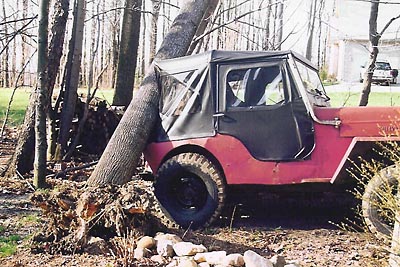 Another natural disaster: the Jeep under the tree belonged to Brian Maglosky. It had a small block Chevy which he installed without cutting the front cross member. He says, "It was extremely good offroad and could literally idle up any hill. True story: I had just sold the Jeep. I had it parked next to the tree, and the tree fell on it. I called the guy and told him what happened and he still bought it." 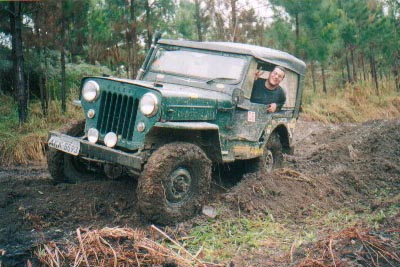 Rodrigo Salvini is going to need some water after this drive. He calls his 1954 Jeep "Jammin" after the Bob Marley song. He says, "Jammin is when you feel good vibrations inside, and when I'm in my Jeep I feel good and forget all the troubles especially the money!"

Rodrigo says he's been on the trails since his father bought and restored a 1962 CJ-5. "That Jeep was wonderful, but for me the 'horse face' (Brazilian nickname for a CJ-3B) is the most beautiful. I really love this model and when I come to be a father in a far far away future, my son is gonna have the chance to drive my Jammin' 54!" 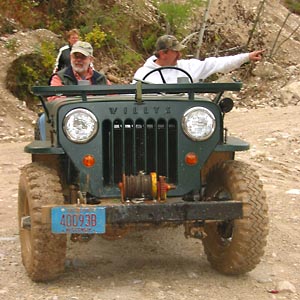 Looks like Bill Ness has made it through the mud and is ready to give Rodrigo a hand, with his PTO winch. Unfortunately Bill is on a trail in Wisconsin, about 6000 miles north of Rio. 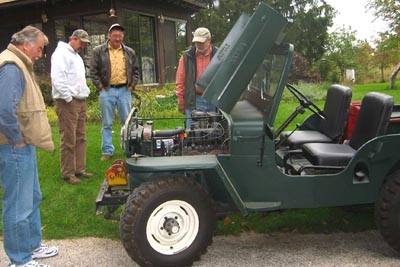 Dave Hatch sent these photos of the trail ride from Green Bay to Collins, Wisconsin in September 2003. Almost looks like Dave has everybody saying a short prayer to help get Bill's 3B started. More likely they're all just admiring the winch, locking hubs, and nicely restored F-head. All the Jeeps except a TJ wear Wisconsin historic plates. 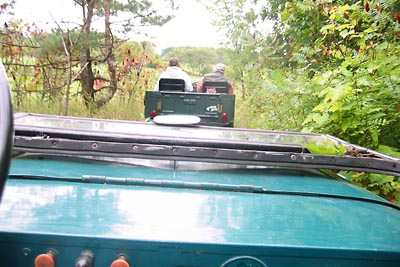 Dave took this photo while riding shotgun in Rollie Olm's 2A, with Bill and his friend Scott leading the way out onto the trail. 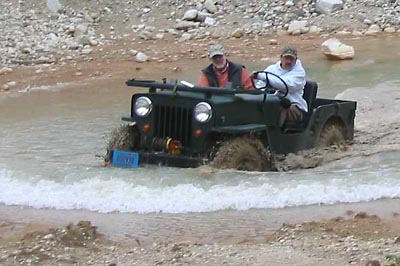 Once Bill knows how deep this pond is, he makes some waves. Good way to get the mud off the tires. See also the wider view of the scenery (80K JPEG).

Thanks to Dave for the photos.

Thanks to the photographers, and the unknown videographer in India. -- Derek Redmond

See also Do CJ-3Bs Get Stuck? and a couple of stories about Jeeps and Water.