Jeeps and Water:
Two Stories From the Old Days

CJ3B.info presents two more chapters in our reminiscences of the old days of Jeeping. Both stories were originally posted on the CJ-3B Bulletin Board. Lawrence Wade remembers the day his brother dared him to drive through the water hole, and Ken Bushdiecker describes his hair-raising trip with a loaded water trailer.

The Day I Stuck Dad's Jeep 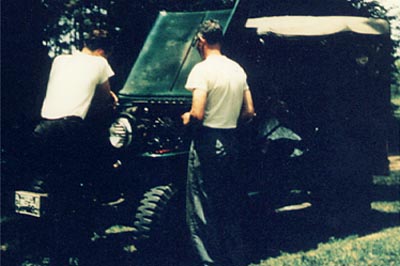 A few months after Dad purchased his new 1955 Willys 3B, in the spring of 1955, a tornado elected to travel into our area of Alabama, and decided to drop down where I was raised. This resulted in a large number of 25-year-old pine trees being uprooted in our front and rear lawns. Forty trees to be exact. After the trees were removed and hauled away, a large quantity of dirt was excavated in an area adjacent to the lawn, to fill the holes where the stumps were removed. This left a large crater about fifteen yards across.

I was home on leave from the military when I first saw this disaster. A few days before I started my leave, summer rain filled the crater to the brim. My older brother, who always managed to get me in trouble, made a bet I could not drive Dad's new Jeep through the water and across to the other side of the crater. 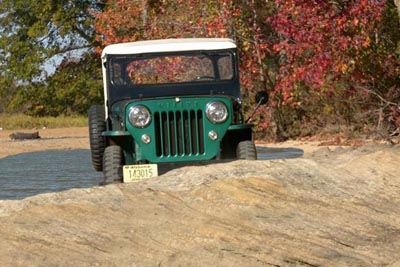 As usual I called his bluff. I entered the water at a slow crawl in four-low range, and I noticed the side steps were under water. At this time it dawned on me that the water could become much deeper in the middle so I started a slow turn to the closest edge of the crater. When I came to the edge of the crater the Jeep came to a rapid stop. Little did I know the backhoe operator had cut the sides of the crater completely vertical. The Jeep would not budge forward at all.

In panic I got out of the Jeep as fast as I could, wading in water above my knees. All I could hear was the bubbling noise of the exhaust, because the tailpipe was under the water. Then my big brother yelled, "Dad is gonna get you when he gets home!"

In panic, I ran to the garage to get a shovel, hoe, rake -- and a stick of dynamite if possible. I could still hear that little voice saying, "Dad is gonna get you." Lord, just anything to get that damn little Jeep out of the crater! I dug for what seemed hours, moving tons of dirt, and then suddenly two narrow ruts did appear. Back in the Jeep, with pedal to the metal I became airborne as I left the crater. 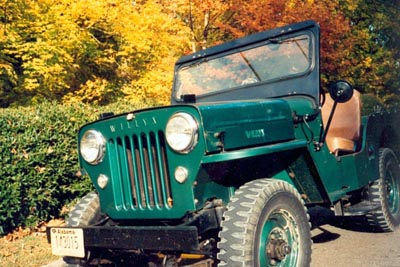 To which I replied, "Dad, even though it didn't have a speck of dust on the body I, thought it could use a little rinse job."

Note: Top photo shows Lawrence's brother and father in 1959. The other two photos were taken recently by Lawrence at the Wheeler National Wildlife Refuge. 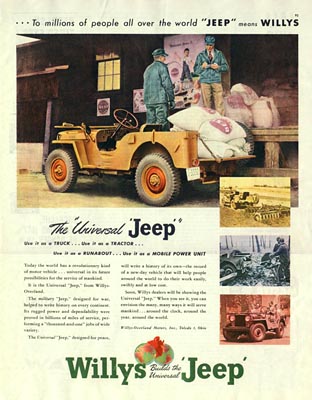 An extended duration of time has now elapsed since I lived at the top of the Slate Range Pass near Death Valley, California. There I resided in a one room cabin, a full 10 miles from my closest neighbor. I was alone, secluded as it was. In the dry desert, water alone represents life. And me, I had to haul my own.

Back then I drove a rebuilt CJ-2A. So monthly I would drive into Homestead Canyon to fill a 250-gallon tank of water. Including the trailer's frame and the tank itself I estimate that comes to about 2500 pounds of rolling weight. The white painted tank was well balanced, with a reasonably-loaded tongue weight. The tank had no baffles so the water could slosh if not completely full.

It was, as I say, a 10-mile trek back home with my load of water. This stretch of narrow, two lane blacktop rarely had a single car. Perhaps one vehicle a day. Occasionally I still recall the haunting sound of lone humming treads reverberating upon the tar road, out in the deathly quiet night.

This blacktop began flat and level, as it went straight north into forsaken lands. Its course lay straight as an arrow up through the Panamint Valley. But since I lived atop a mountain pass, I would have to climb an ever increasing grade.

Through the nearly flat stretch I generally crawled along under 40 MPH. But I needed to gain momentum for the last two miles. I forced the Jeep to 48 MPH, and the already notorious Ross steering became an extremely delicate affair. At 48 MPH my senses were on edge. I understood well that the empty oncoming lane was my only insurance policy. The weight of 2500 pounds was potentially pushing the lesser CJ along. But I had no choice as the grade was more than the Go-Devil could deliver without momentum gained during the last two miles. 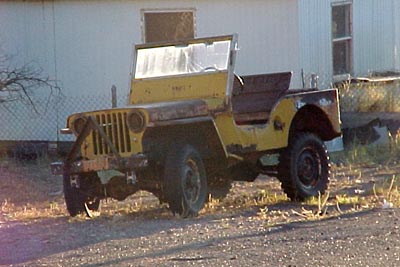 By the time I reached my turnoff just 1/2 mile shy of the pass, the Jeep was down to 6 MPH at full throttle. Once upon the sandy drive I stopped on a slight downhill grade. Here at the place I called the "Burro Bowl," I shifted all gears down to compound the ratios. It was time to get out. I rotated the Free Locks for full engagement. The sun now beating down at 115 degrees Fahrenheit indicated this water would get put to good use.

For the next half mile the freight would be little problem. At least not until I got near the cabin, which was located almost at the very crest of the Slate Range. So I continued on up the narrow side canyon drive, slightly weaving through sparse, windshield-high creosote bush.

In order for the water to flow down to my outdoor shower spout and on into my kitchen, I had to get the tank into its position only 25 feet behind and way higher than the full-size cabin was tall. I believe that should give you an idea of how steep the grade was behind the cabin. It was so steep that any two-wheel-drive of any make or model need not even attempt it, even if said vehicle was unloaded. No way! 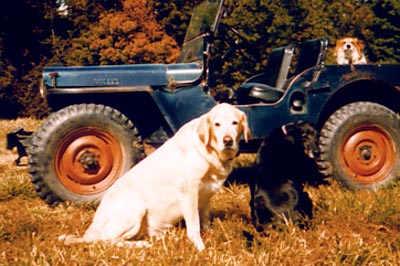 I now passed in front of the cabin with the tugging 2A. Just one final turn as I passed, and it was straight up the mountain. Again any and all momentum was critical, and this time I was in 4WD low range. Observing the grade with no time to plan, I knew I must not stop. The Jeep must make it to the ledge above. To stop on the incline could easily mean death by gravitational pull from the water's greater weight.

The final assault began in second gear low in order to achieve sufficient momentum. Accelerating and ascending at full throttle, the sand gave way to a hard black rock. The previous tire traction in sand was at times iffy but now became better. When I finally made it to the narrow flat landing of dynamite blasted rock, I had to execute a precise hard right turn. With the Jeep now at a sharp angle to that of the water tank, I must find the unsynchronized 1st gear quickly for the final tug while any momentum remained. Finally an immediate stop. Whew-ee! Tears in my eyes again.

Looking back, I easily recall those glory days. You just don't forget the hair-raising experiences from the good ole days. In fact I now seem to miss hauling that load of life-giving water, as I recount this experience.
Note: CJ-2A advertisement found in a Collier's magazine from 1945. CJ-2A photos by Mike Winchester and by Keith Stout (with his dogs).

Thanks to Lawrence and Ken for the stories. -- Derek Redmond

See also Ken's story about Tracks in the Virgin Snow.