CJ-3Bs in the
LIFE Photo Archive

I always loved LIFE magazine. As a teenager I wallpapered the ceiling of my bedroom with LIFE covers, and looked forward to seeing huge photos in the magazine each week, of events we had heard about on the radio or in the newspaper, or seen flickering images of on television.

LIFE has now published its last issue, but at the end of 2008, as I looked at "The Year in Pictures" in another news magazine, I was still struck by the power and perspective I found in the large, detailed color photographs, even in this era of instant TV news and the Internet.

Seth Gilbert at metue.com writes, "LIFE was the first magazine of its era, of any era, to give as much emphasis to photojournalism as to print. Over the decades LIFE published some of the most memorable images of the 20th century, from the conflicts and struggles of war times, to the lifestyles of celebrities, to the achievements and failures of nations. JFK, Vietnam, Korea, the Civil Rights movement, Elvis, Marilyn Monroe, landing on the moon. Photojournalism will forever owe the magazine a debt of gratitude for its influence and support in shaping their industry."

The LIFE photo archive of more than 10 million pictures is now being made available on Google, free for personal and research purposes, but copyright and ownership of all images remains with Time Inc. A majority of the images have never been publicly displayed before. They appear among the results of any Google image search, or are available separately at LIFE.com.

Todd Moulton was one of the first people to search the new archive, and he pointed us to some photos he knew readers of CJ3B.info would be interested in. Click each photo to see a larger copy. -- Derek Redmond

MacArthur in the Philippines, 1961 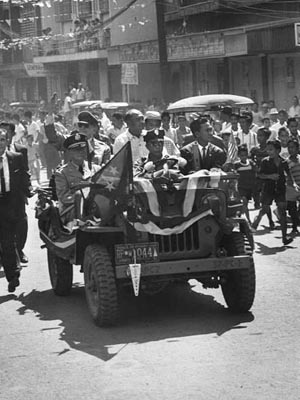 Ver Soriano in the Philippines found this picture in the LIFE archive, and sent these comments: "The photo was taken by Carl Mydans in July 1961, during the last sentimental visit of the late General Douglas MacArthur to the Philippines. General MacArthur was riding in the rear of the flag-draped M606, which I suspect was owned by the Philippine Constabulary (PC) since there is a PC marking on the front bumper. Not long before his death in 1964, General MacArthur's visit included tours of famous World War II landmarks such as Leyte, Corregidor, Bataan, Manila and Lingayen."

Photographer Carl Mydans joined the recently established LIFE Magazine in 1936, where he met his wife, journalist Shelley Mydans. They were sent to Europe to cover the Second World War, and were in the Philippines when Japan bombed Pearl Harbor. Trapped in Manila, they were captured by the Japanese and were interned with other Americans until December 1943. The following year Carl covered the D-Day landings in France, but returned to take the famous (but staged) photograph of General MacArthur wading ashore in the Philippines. Mydans died in 2004. 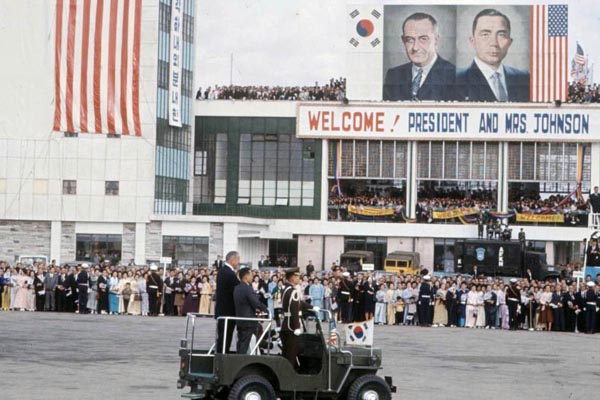 U.S. President Johnson stands in a CJ-3B as he arrives to a big welcome in Seoul, Korea in 1966. Two more high hoods are parked in the background with the Armed Forces Radio truck. This photo by George Silk is incorrectly identified in the LIFE archive as being taken in Malaysia.

Major Daniel P. Bolger in Scenes from an Unfinished War describes a dark and largely forgotten moment in U.S. military history that resulted from this visit. Bolger writes that North Korea in 1966 "wanted to increase the price of the United States staying in Korea beyond what it would be willing to pay. Spurred by their supreme leader's vision and pressed by their newly promoted generals, North Korean special operators went to work. This time, as Kim Il-sung warned, the unwitting Americans were 'target No. 1.'

"President Lyndon B. Johnson could not have chosen a worse time to visit Seoul. General Bonesteel had been in command only about two months. He spent most of that time trying to separate fact from fiction along the DMZ. In the meantime, deadly incidents and rumors of future incidents proliferated. President Johnson came to Korea on 31 October, trailed by a bustling entourage of more than 500 people. He met with President Park, U.S. Ambassador Winthrop G. Brown, General Bonesteel, and American troops at Camp Stanley -- all in a frenzied forty-four hours. United Nations Command forces remained ready, but the DPRK made no move against Johnson.

"Instead, the North Koreans took action against Johnson's men. In the predawn darkness on 2 November, while the American president slept near Seoul under heavy guard, a KPA squad tracked an eight-man patrol from Company A, 1-23 Infantry. The northerners, probably from the 17th Foot Reconnaissance Brigade, paralleled the oblivious American soldiers. Once the U.S. element reached a point about a kilometer south of the DMZ proper, the North Koreans estimated that the Americans had relaxed their vigilance. The Communist soldiers swung in ahead of the plodding American file, assumed hasty ambush positions, and engaged the Americans with hand grenades and submachine guns.

"The U.S. squad disintegrated under a hail of bullets and grenade fragments. Despite later wishful stories of heroics, six Americans and a KATUSA went down almost instantly. A seventh American survived by playing dead. For one day, Korea displaced Vietnam from the front pages of American newspapers. Then Johnson left for home and interest waned." 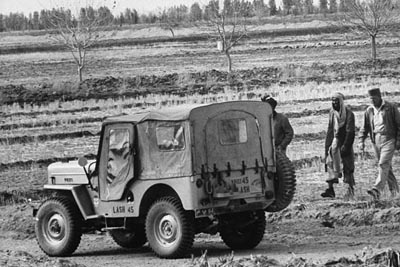 A number of CJ-3B appearances in photos from the early 1960s reflect the many foreign aid projects undertaken by the American government during the Cold War, as it tried to combat Communist influence around the world.

Both the U.S. and the U.S.S.R. were conducting massive road-building projects in Afghanistan in 1963. Afghanistan signed a major agreement to export agricutural products to the Soviet Union in February of that year, the same month that LIFE photographer James Burke was in the Helmand Valley and photographed U.S. agricultural advisor John Caudill inspecting a soil reclamation project.

I initially thought "LASH" was an acronym, but Darcy McQuillan pointed out that it probably refers to the town of Lash, just north of the Helmand Valley. 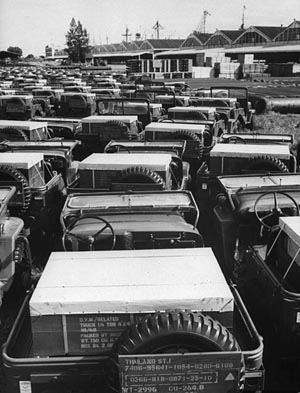 Of course much of the foreign aid was direct military asssistance. This picture taken by Nat Farbman shows Jeeps at dockside in Bangkok, Thailand in November 1960. According to the photographer's notes, the Jeeps were intended for the Thai army, which appears to be true since they are clearly military vehicles with blackout lights. However, the photo notes also say the Jeeps are U.S.-made, when in fact they are Mitsubishi models from Japan, recognizable by details such as the glovebox and the split-pane windshield with the vent below.

The significance of much of the information stencilled on the Jeeps isn't clear. The boxes in the back of each Jeep probably contained the canvas top and doors. 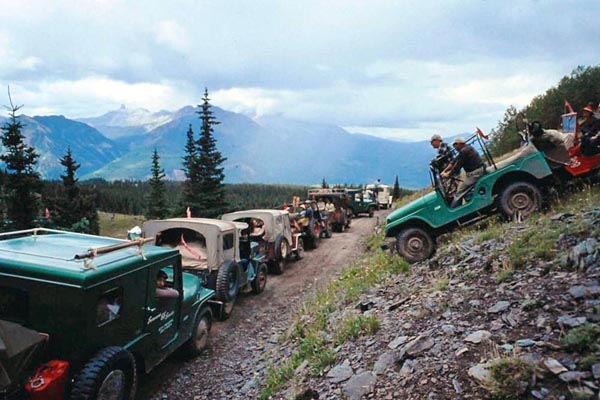 This series of pictures titled "Jeep Caravan" by photographer J. R. Eyerman, shows the 1959 Jeep Cavalcade around Ouray, part of the "Rush to the Rockies" Centennial celebrating the beginning of the mining rush to the area in 1859. 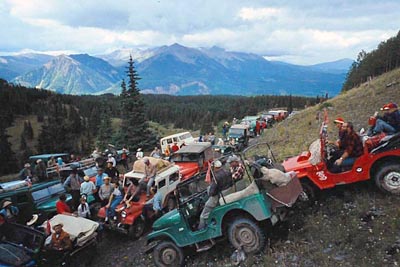 The same two Jeeps watch from the slope, as the caravan heads in the other direction. The Jeep in the lower left is a CJ-3B, and there's another green high hood with soft top in the center of the picture. 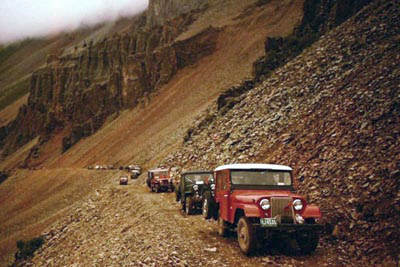 Jim Gregor reminded me that we have a map of the area (130K JPEG) in the 1967 Popular Mechanics article we posted on Jeep vs. Scout vs. Bronco. 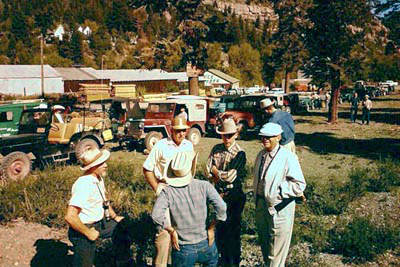 Another transparency (scanned backwards in the archive) can be flipped to reveal Rice Lumber, a well-known lumber yard in Ouray CO for many years, in the background. 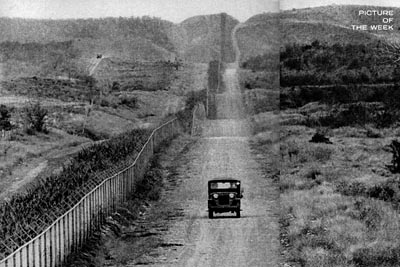 This "Picture of the Week" in LIFE (April 27, 1962) was captioned, "Of all the landscapes of the Western Hemisphere none is more grimly revealing than the hilly Cuban vista being traversed by a U.S. military jeep. The 10-foot barbed-wire fence borders the U.S. naval base at Guantanamo Bay, and on Castro's side of the fence both terrain and attitude are growing more menacing. Next to the fence Cubans have planted cruel big-needle cactuses. Object: to prevent uninspected exit of any of the Cuban civilians working on the base, and to discourage anyone from clawing his way to sanctuary within the base." 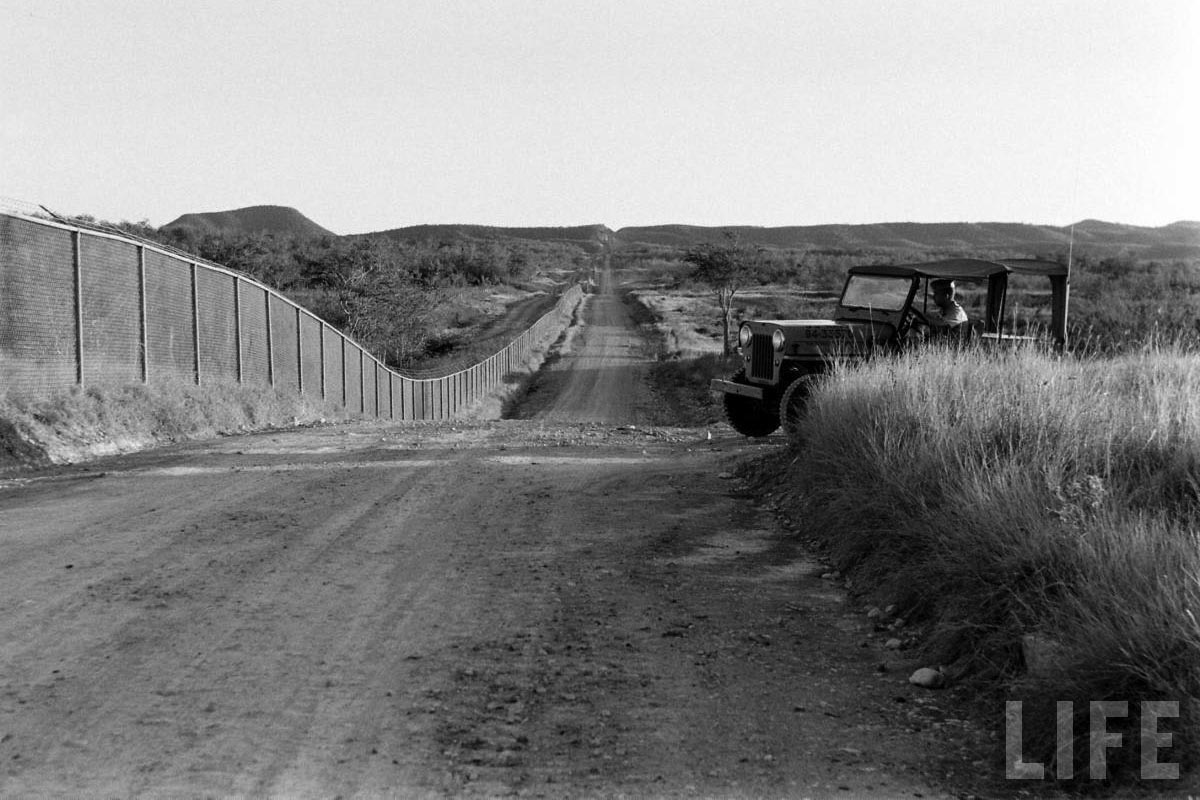 The above photo and this previously unpublished one were taken by Dmitri Kessel, probably on his way to Bolivia. This closer side view of the Jeep reveals that it's not the same Navy CJ-3B seen in another photo (210K JPEG) that has also appeared on CJ3B.info, and was probably taken by Kessel nearby, on the same day.

Thanks to Todd Moulton for digging up the photos, which are all copyright by Time, Inc. Thanks to Major Daniel P. Bolger for excerpts from his Scenes from an Unfinished War: Low-Intensity Conflict in Korea, 1966-1968 (United States Army Command and General Staff College, 1991.) -- Derek Redmond