The war in Vietnam was covered extensively by LIFE magazine. Pictures taken by LIFE's photojournalists tend to be more dramatic than the snapshots grabbed by military personnel in their free time, seen in some of our other pages of CJ-3B Jeeps in Vietnam. The photographers were looking for the moments that would define the war for readers at home, and they were sometimes taking pictures during combat. 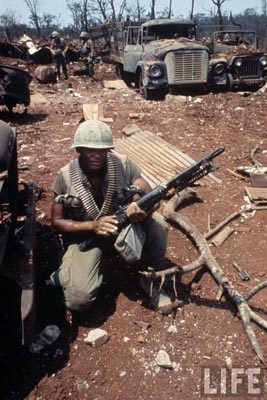 British photographer Larry Burrows took a harrowing series of photos on an assignment called "Route Nine Defensive," undated in the LIFE archive. It appears to show Operation Pegasus, the combined operation by U.S. Marines and Air Cavalry in April 1968 to reopen the road from the coast to the Marine base at Khe Sanh, which had been under siege and supplied by air for several months.

The face in this photo reflects a determination to reach the isolated base, in the face of occasionally heavy opposition; American casualties in the two-week operation were 92 killed and 667 wounded. A photo from inside an M151 MUTT (90K JPEG) shows the ferocity of the action, with a Willys M274 Mechanical Mule in the background.

Khe Sanh Combat Base was permanently abandoned two months later. It has never been determined whether the North Vietnamese siege of Khe Sanh was actually intended to capture the base, or primarily as a diversion from their Tet offensive in the coastal area. (See Battle of Khe Sanh at Wikipedia.) 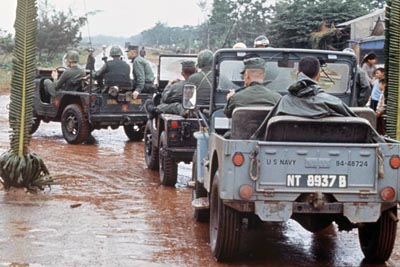 Another undated Larry Burrows photo in the archive, taken at the Da Nang airbase, provides a good look at some little M422 Mighty Mites in comparison to a larger U.S. Navy CJ-3B, which actually has room for a Marine to sit relatively comfortably.

The ventilating windshield and rear bumperettes were commonly seen on Navy 3B's, but the large rear view mirror may have been borrowed from a Mitsubishi Jeep. In an enlargement of the photo (120K JPEG) you can clearly see the steely gaze of the Marine driver reflected in it. 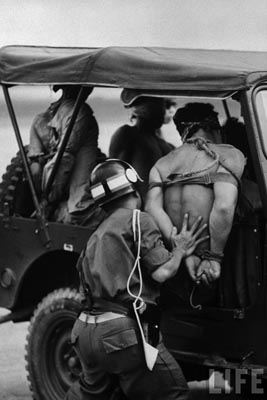 Larry Burrows spent nine years documenting the war in Vietnam. This picture showing Viet Cong prisoners being loaded into a South Vietnamese Jeep was taken in 1962, the year he began covering the war for LIFE. He continued regular assignments in the country until he was killed in 1971 when the helicopter in which he was riding was shot down over the Laos border. His posthumously published book Larry Burrows: Vietnam is recognized as a significant piece, not only of photojournalism, but of history and art. 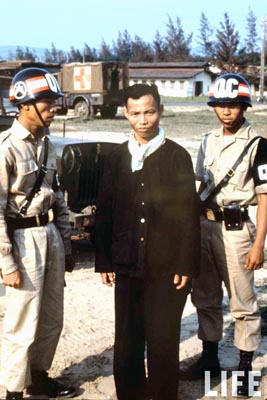 Burrows caught a glimpse of a Mitsubishi J4C in the background of a later, quite different, picture of a Viet Cong prisoner in ARVN (Army of the Republic of Vietnam) military police custody. This photo is undated in the archive. 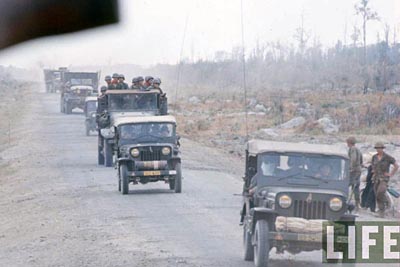 The largest number of high-hood Jeeps in Vietnam were Mitsubishi J4's used by South Vietnamese forces. This telephoto shot taken by Dutch photographer Co Rentmeester is simply captioned "The Cavalry Moves Out," but Rentmeester may have been using the term "cavalry" in a figurative sense.

Anybody know what would have been strapped to the front bumpers of these Jeeps? 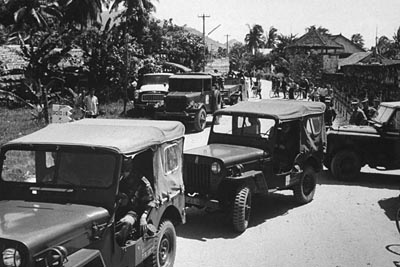 In July 1961 John Dominis photographed a couple of Mitsubishi CJ-3Bs and other vehicles in the village of Triton in the Mekong Delta of Vietnam. He noted the vehicles were supplied by the U.S. for the South Vietnamese Army. The Jeeps do look new, emerging from what appears to be a military compound guarded by a sentry, and are driven by soldiers. The other vehicles, including a Land Rover and a collection of military and civilian trucks, seem less likely to be new military aid. 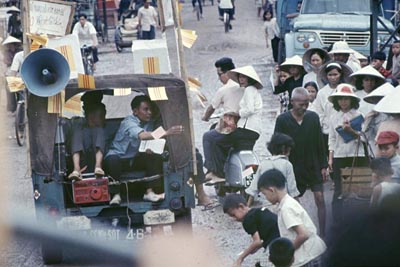 It's too bad Co Rentmeester didn't get a front view of this Jeep engaging in some electioneering. In addition to South Vietnamese flags, it seems to be carrying a huge display supported by bamboo poles. From behind, we do get to see the rear-facing back seat, the portable generator powering a public-address system for speeches or music, and the enthusiastic campaign worker tossing out flyers or perhaps bribes. 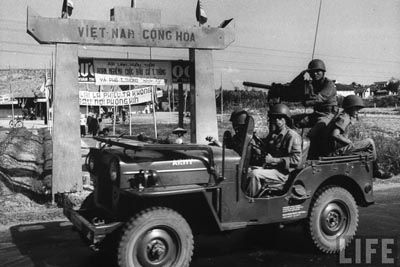 This is another election photo, and the LIFE archive includes better than average detail about this one: "'S. Vietnam soldiers passing polling place near Saigon. Vietnam, April 1961. Photographer John Dominis."

That election, which returned Ngo Dinh Diem to the presidency, was widely considered to be heavily rigged, which may or may not account for the presence of the army outside a polling station. 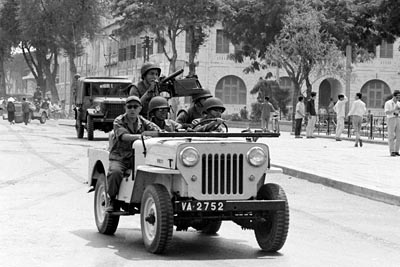 In Vietnam between 1963 and 1965, it was much more common for the government to be changed by a military coup than by an election. Two photos by Robert W. Kelley are dated only as 1965, but probably were taken during the February coup that saw General Khanh ousted as head of the military government and exiled to Palm Beach, Florida.

This is an interesting pair of photographs, of five South Vietnamese marines in what appears to be a civilian Willys CJ-3B turned into a Navy Jeep by moving the spare tire and installing a machine gun mount. They look like they're anticipating some action, although they may be putting it on for the photographer. 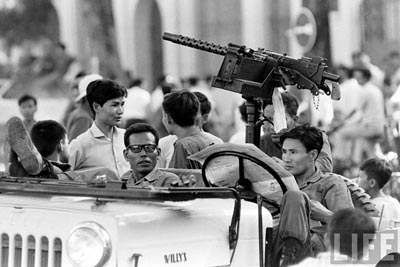 A little later the marines seem to be feeling just a bit more relaxed, as they catch up on the news. Another detail of the Jeep evident here is the removal of both the rear view mirrors.

Elsewhere on the web, see a British Pathé newsreel of the coup, including several Jeeps.) 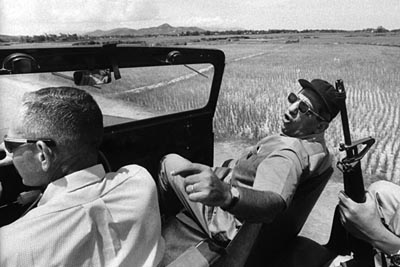 This photo is well-documented in the archive: "Barry Zorthian, former Marine, Head of USIA Joint US Public Affairs Office, in jeep with driver and armed guard as they pass well-tended rice paddy during his tour to evaluate the war, north of Saigon. Location: Binh Dinh, Vietnam. Date taken: May 1967. Photographer: Co Rentmeester."

Although he might appear here to be a military expert, Barry Zorthian is in fact more of a communications expert. He was in charge of media relations and internal communications at the U.S. Embassy in Saigon from 1964 to 1968, and later became Program Manager of the Voice of America, and vice-president of Time Inc.

The LIFE photo archive of more than 10 million pictures is copyright by Time Inc.

Thanks to Luis Mariano Paz, Todd Moulton and Hanno Spoelstra for keeping their eyes open for photos of interest, and of course to the photographers. -- Derek Redmond

See also CJ-3Bs in the LIFE Photo Archive on CJ3B.info.