Federico Cavedo found these photos in the LIFE photo archive of more than 10 million pictures, which has been made available through Google. Copyright and ownership of all images remains with Time Inc. 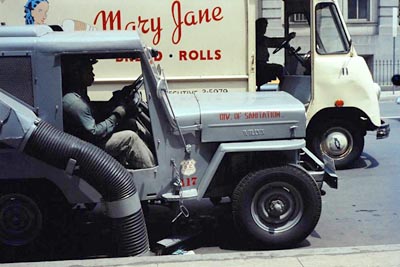 This photo was for a LIFE series called "Frontiers Of Living" showcasing the increasing role of technology in everyday life. Photographer Andreas Feininger took this shot and a wonderful worm's eye view (100K JPEG) of a CJ-3B vacuuming the curb in Washington DC. The date of the photo isn't recorded. 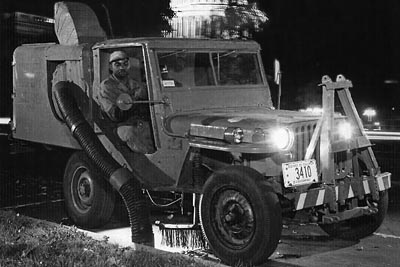 Washington's Division of Sanitation also had earlier Jeeps equipped with what Popular Science magazine referred to as a "Gutter-Vac" in their March 1956 article called Jeep Cleans Streets in a Jiffy (100K JPEG). The photo at right, from the Images in Time collection at the Toledo Lucas County Public Library, appears to show a surplus MB.

Anybody have more information on the Gutter-Vac? I haven't seen it in Jeep special equipment catalogues. Maybe it's related to the Tarco "City Slicker" FC-170? 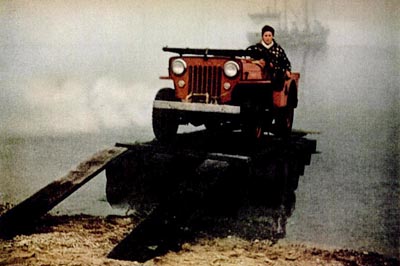 Perhaps the furthest north a CJ-3B has ever been. On 6 August 1954, this Jeep was floated ashore on a raft of oil drums, from a small wooden ship to Prince of Wales Island in northern Canada. This dramatic shot and other photos (150K JPEG) of this "amateur" expedition were part of an article on Arctic exploration in LIFE (29 November 1954.)

(Another shot of a Jeep in that issue was an ad for Champion spark plugs, 100K JPEG.) 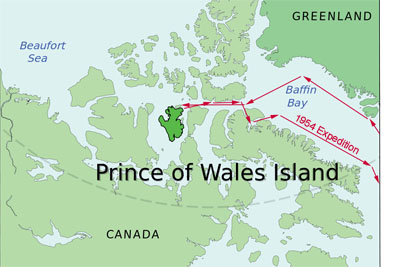 The landing of the Jeep, in preparation for a trip across Prince of Wales Island to the Magnetic North Pole, turned out to be fruitless, because the Jeep got bogged down in the soft August muskeg. The little ship had to sail through the ice around the north tip of the island instead. We don't know for sure whether the group of adventurers left the CJ-3B behind on the island. 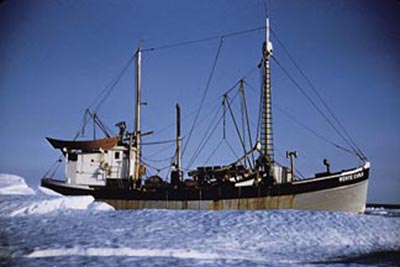 The story behind the trip is amazing; a New York lawyer named Wilber E. Dow rented a 78-foot wooden fishing boat, and recruited a mostly-inexperienced crew to help him sail up to Arctic Canada's "labyrinth of islands and ice." The red CJ-3B can just be glimpsed lashed to the deck in this small photo of the boat, the Monte Carlo.

Ther only seasoned scientist on board was Boston College seismologist Daniel Linehan, who was also a Jesuit priest. He was recruited just five days before the Monte Carlo sailed north from Portland, Maine. 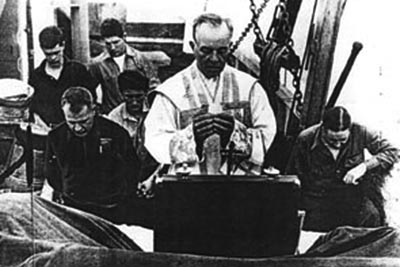 A couple of factors may have helped the intrepid group survive adventures which included sailing through a hurricane and being rescued from pack ice by a Canadian icebreaker. One: Linehan said mass, on deck from an altar on the bed of the Jeep. And two: there were 150 cases of Rheingold beer in the hold.

See the full story of The Voyage of the Monte Carlo on the Boston College website. 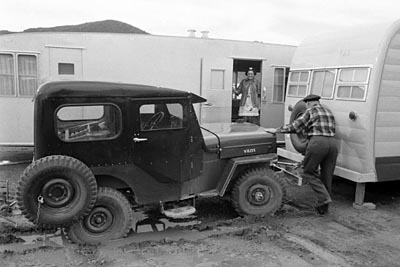 Another expedition which was perhaps less perilous than the voyage of the Monte Carlo, but impressive in its scale, was a huge safari of house trailers from Arizona To Guadalajara, Mexico in 1955. This hardtop CJ-3B along for the trip was among the pictures taken by LIFE photographer Loomis Dean which didn't make it into the article "A Town on Tour" (21 February 1955, p.142.)

At an initial glance, this photo appears to show the Jeep hitched behind one of the house trailers. 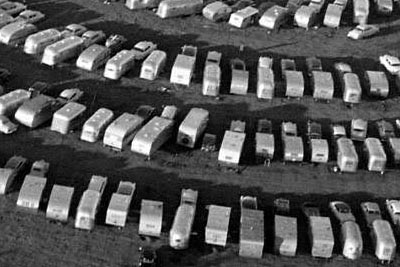 But a close look at an aerial photo (210K JPEG) of the whole caravan camped in a circle for the night, reveals that along with about 370 trailers towed by cars and pickups, there was one self-propelled motor home. (It's in the center of the small section shown at left.) The Jeep appears to be parked beside the RV.

After crossing the border (120K JPEG) at Nogales AZ, the caravan took advantage of the new 1,140-mile highway, built in the early 1950s along the west coast of Mexico to Guadalajara. 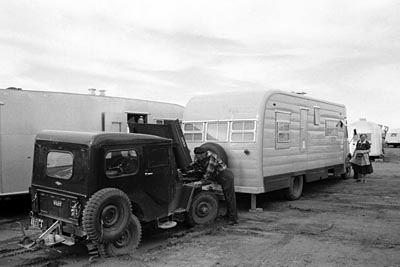 Another angle by Loomis Dean gives us a better view of the motor home which towed the CJ-3B, apparently owned by an elderly couple. It also reveals an interesting hand-powered winch mounted on the rear of the Jeep.

The owner checking the oil here, and many of the other folks at the group meeting in the center of the circle of trailers below, wear the blue berets (30K JPEG) which identify this as one of the trailer safaris organized by "Wally Byam's Caravaners." 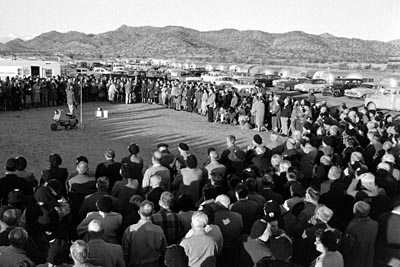 Wally Byam, founder of the Airstream trailer company, personally led caravans of Airstreamers and other trailer fans, all over the world. The most famous was the 1959 African Caravan. Here Wally arrives on his scooter to address the Arizona to Guadalajara group. In the top right of the photo we can see that at least one of the trailers was being pulled by a Willys.

As of 2012, the Wally Byam Caravan Club International is still active. 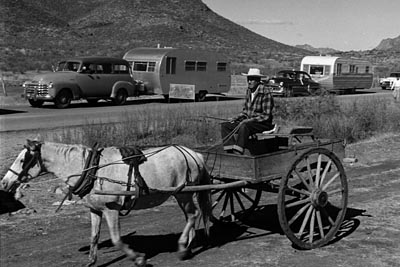 This nice photo from the LIFE archive shows trailers being pulled by a Caddy and a two-tone Chevy Suburban, among other vehicles, along the new highway paralleling a local road. A hand-lettered sign in the background shows "Wally Byam's Caravan" traffic where to turn.

Thanks to Federico for finding the photos in the LIFE archive at TIME.com. The Prince of Wales Island map is used under a GNU license. -- Derek Redmond

See photos from Cuba, Korea, Colorado and more, in CJ-3Bs in the LIFE Photo Archive.