Christmas is a special time for anyone with kids. And a dad who has an old Jeep usually has a slightly special relationship with his kids, because they know dad has a toy too. (This might also be true for moms, but most moms are apparently too sensible to spend time messing around with old Jeeps.) So I thought Christmas might be a good time to put together a photo album of kids with Jeeps. 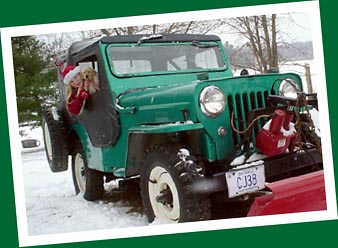 Here's my daughter and our new puppy Dusty, waiting for me to start plowing the first snowfall in 2006. We had lost our black lab Starr that fall -- she made her last appearance on the website in a photo with kids at the Canada Day parade (80K JPEG) in July. 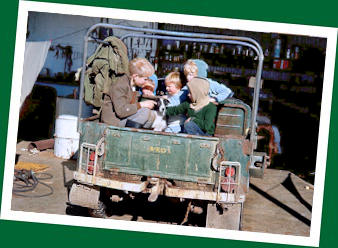 I think this one goes way back, and it comes from an outback station in central Australia, but I have no other details. It's worth a closer look (400K JPEG). Thanks to Mick Broomfield for finding it. 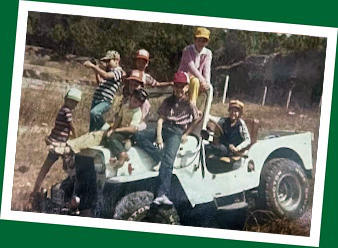 These kids were enjoying somebody's Jeep on a spring outing near Guadalajara, Mexico in the 1980s. Thanks to Arturo Valencia for this one. 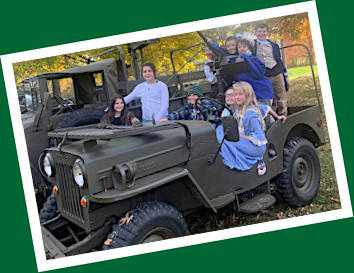 The most recent picture here is a middle school history class experiencing history in the form of Joe Evans' M606 restoration, at the Tipton-Haynes State Historic Site in Johnson City, Tennessee in November 2021. 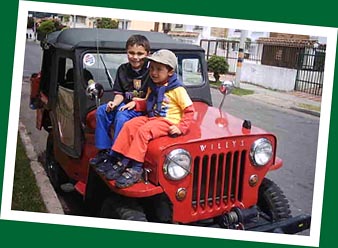 Carlos Barrera and his family in Colombia call their 1953 CJ-3B "Cacerolo" and consider it a fifth member of the family. Here are his two boys shortly after Carlos bought the Jeep; he has since restored it in military style. 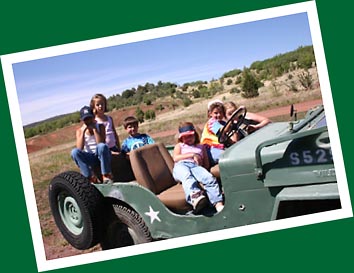 Sam Patterson in Arizona has had his '58 Willys for 20 years, and says he's "slowly but surely getting it to where it works all the time, everytime." He took the kids on a Jeep trip to Stoneman Lake south of Flagstaff earlier this year, along with his brother-in-law's CJ-5. See also a photo of the kids and Jeeps in the forest with Smokey (100K JPEG) -- it's what Jeeping is all about. 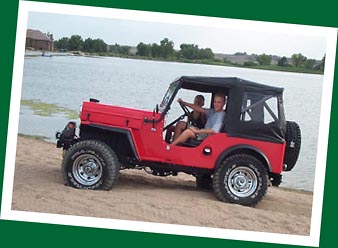 Ted Svitavsky's boys were pretty happy when Dad decided to build his Dream Jeep. That was 2002 so they're probably old enough to drive now; keep your eyes open if you're on the road or the trails in Colorado. 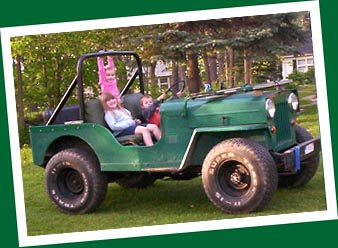 Just before Christmas 2005, Joe Zindle in Illinois finally had a chance to get his 1960 Jeep running again. Good timing, since the kids are getting old enough to enjoy the ride. 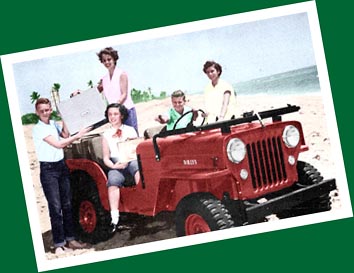 They have Christmas in Florida too. This photo of a group of "teensters" on the beach near Miami was posed for the Willys Dealer News in 1955. See more details in CJ3Bs in the Sand. 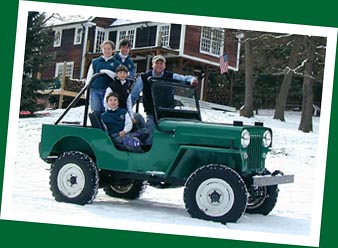 Classic Christmas card picture of Bruce Phillips and his family in their 1961 3B in Pennsylvania a few years ago, right after Bruce finished the restoration. 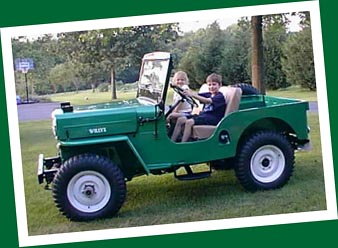 Frank Maurer's '62, also in PA, is in the same color scheme except Frank used a tan for the seats. The kids like it just fine.

Is that Frank or Bruce dressed up as Santa below? No roll bar -- must be Frank. Or maybe it's Joe, or Derek...