Wheelbarrow with a Hi-Lift 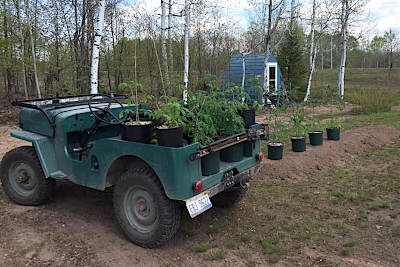 Jeeps are pretty useful for all kinds of outdoor chores -- it can be in the wilderness, or in a more domestic setting. Here's Andy Chamberlain's 1953 CJ-3B in Michigan, lending a helping hand in the garden.


High Hoods for the Back Yard 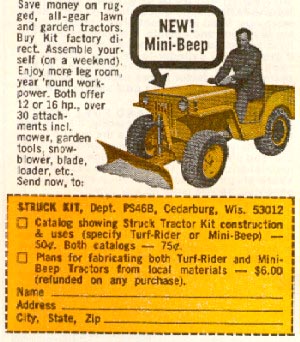 Mike Boyink said, "Ran across this ad in a 1976 Popular Science. Other ads on the page included "An Atlas Body In 7 Days," the flatback kit for a VW bug, and an offer to "Run your car on wood scraps, coal, charcoal...almost any carbonaceous material! Proven in hundreds of thousands of vehicles during WWII! Guaranteed!"

Another Jeep-style lawn tractor was the Palomino tractor from the Roof Manufacturing Co. in Pontiac, Illinois. See an article on the Yesterday's Tractors website, and the Comments in response to the article. 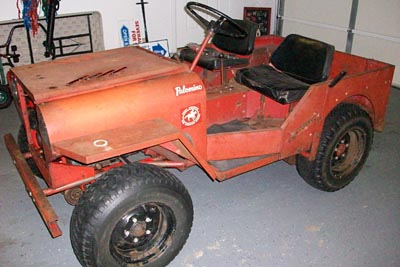 Dan Erni in Illinois sent photos of his Palomino and wrote: "The Roof Palomino has a two-cylinder Kohler engine (160K JPEG) and hydrostatic transmission. It was equipped with a five-foot-wide mower deck, which I removed before taking these photos. See the rear view (150K JPEG). Information about these units is very sketchy, but it is generally agreed that they are fairly rare, with perhaps only a few to several hundred being manufactured." 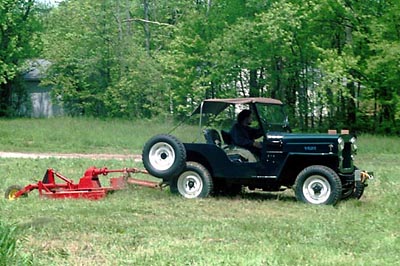 Bob Christy's wife Mindy took this photo of him cutting weeds with a brush hog powered by the PTO on his 1953 CJ-3B in Ohio.

Bob comments that "Five feet is a heck of a lot of cutting, so you don't have to make many passes to get the job done. But you just can't make a tight turn with a trailer type brush hog. The shaft will bind if you try to turn tight. This leads to having to disengage the PTO and make a wide sweeping turn to line yourself up for the next pass."

See more details on Running a Bush Hog From a Jeep PTO on CJ3B.info. 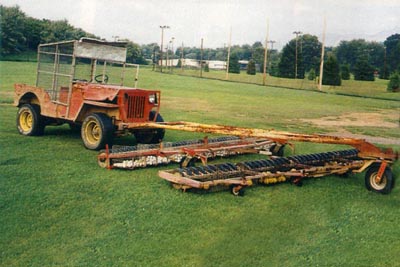 For picking up golf balls on a driving range, or cutting the grass in a park with a bear problem, this "hardtop" could be useful.

This photo from an unidentified location showed up in the July 2001 issue of Jp magazine. 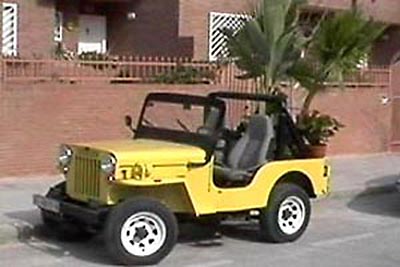 Jose Carlos Osinski of Alicante, Spain drives this nice military surplus VIASA CJ-3, equipped with the Barreiros diesel engine. The photos he sent look like one of those great old Willys brochures showing Jeeps hard at work carrying every possible kind of load. 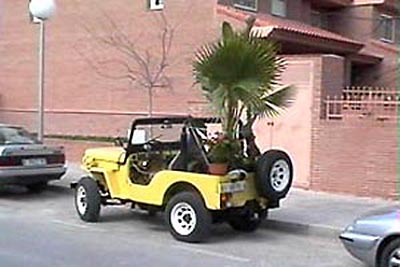 Jose didn't say whether this was for business, or if he was just bringing something home for the garden. 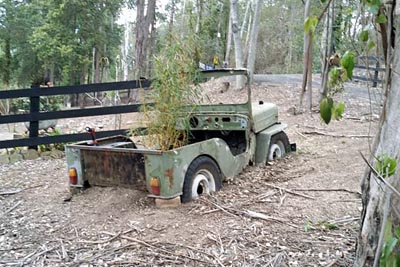 If you like trees in Jeeps, here's an idea you might try. But be warned the neighbors may not appreciate it. 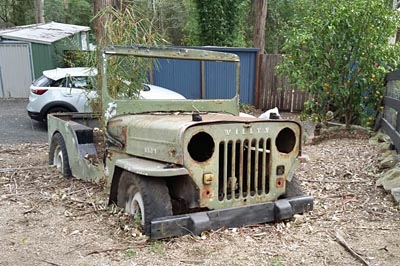 Scott Rough in Kurrajong, Australia says, "Old CJ-3B body too far gone for resto, has given up its guts to keep others alive, and now found a new focus." 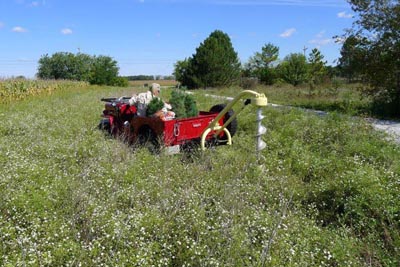 The late John Ittel's 1954 CJ-3B in Ohio carried the trees, and the tool for planting them. It's one of a number of farm-equipped Willys Jeeps John restored. 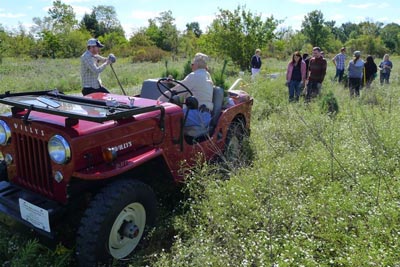 This planting demonstration was part of a 2012 exhibit hosted by the University of Toledo's Center for the Visual Arts, titled "Universal Future: Where There's a Willys There's a Way." 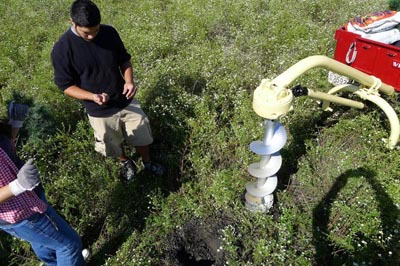 The Danuser post hole digger is powered by the Jeep's rear PTO, and has many uses including tree planting. See more details on this 2012 event in Universal Farming in Ohio on CJ3B.info.