Running a Bush Hog From a Jeep PTO

Bob Christy has set up a Bush Hog brand rotary mower for pulling behind his 1953 CJ-3B in Ohio. His project inspired some discussion on the CJ-3B Bulletin Board about practicality and safety. 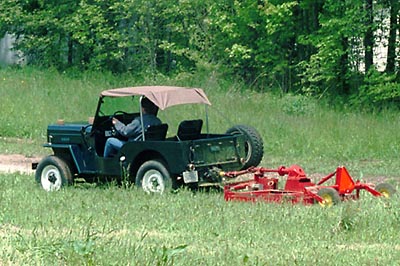 Glenn Houston commented: "This is what Jeeps were made for; years ago we pulled a hay mower, rake, had a buck rake for the front, post hole digger and a whole lot more. It never hurt them much. About the only thing we didn't do was plow with them, didn't have the power for that. There should be no problem pulling a brush hog with a Jeep. Hard to find a good used pull-type brush hog; let us know how it works."

Bob described his experience pulling the mower behind a Jeep: "The shaft will bind if you try to turn tight. This leads to having disengage the PTO and make a wide sweeping turn to line yourself up for the next pass. There are also some areas you just cannot get to easily, so you have to back the mower into what you want to mow, then start your mowing run.

Steve Pesta cautioned: "There is a big difference between a bush hog and most other farm implements. The shock load will break something real quick unless you are mowing only grass. I have (and still do) live on a farm and I only use one of my Ford tractors for the bush hog. These PTO units are becoming too hard to come by to subject them to this abuse. Also there is the question of safety. A farm tractor has large, usually loaded tires that will hold back a bush hog on hilly terrain. Tractor PTO's also have over-riding clutches that prevent the bush hog from pushing you down a hill. There have been more than a few people killed here in southern Ohio on tractors without over-riding clutches and bush hogs.

"Your mower has either a shear pin or a clutch in the PTO shaft. I have owned both types. If it has a shear pin use one that is slightly smaller. For instance if the hole is one half inch use a three eights soft bolt. I do this when I use my compact diesel w/bush hog. Obviously it will shear much easier than the larger pin. If it has the clutch, disassemble it and clean the plates and reassemble it at minimun compression. You can experiment until you get the right tension. I hope I don't sound like an alarmist. I would just hate to see you damage your Jeep, or worse -- get hurt." 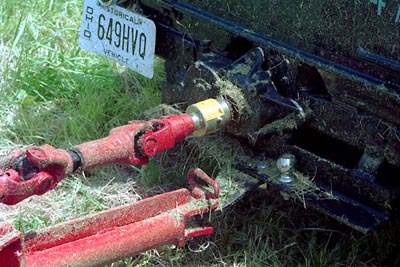 Bob replied: "My field is only about a 3-4% grade and is all grass. The Bush Hog has a shear pin in the driveline; in fact, as near as I can tell there are two of them. One is in the shaft, the other is a sort of flange right in front of the gearbox. I have bought an overrunning clutch for $50 at Tractor Supply Co. and you are right, it is essential. If you did not have this, the inertia of the mower would push the Jeep along.

"Because of the overrunning clutch, the driveline is pretty darn short, making turns even harder, but I bought about an inch of travel by shortening the main driveshaft of the mower where the U-joint mounts. The shaft has 4-6 inches of unrestricted travel so it should not be a problem.

"The mower does make a heck of a lot of noise, making you think it's running too fast or is going to come apart. This is especially true when there is no load on the mower and it is spinning." 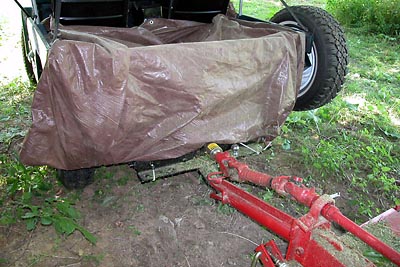 "The crap that flies off the mower was getting all over the Jeep, making a trip to the car wash a must right after a each mowing, so I made a shield for the back of my Jeep out of a tarp, to eliminate most of this.

"One concern I have is that there are no chains at the front of the mower like some of them have, to protect against larger flying objects. I don't want to add chains because the blade could grab them at times."

Steve said: "I wouldn't worry about the chains if you are only cutting grass/weeds. My first bush hog (Woods pull type) had them but my current one (Ford 951 3pt.) does not. I mow a lot of brush and only rarely does anything get thrown forward."

Tom Callahan recommended using the chains: "I suggest that you do make/install chains on the front (your side) of the mower. Blade tip speed approaches 200 MPH on most rotary cutters, so rocks, sticks, turtles etc. usually do not have good directional control as they come out from under the deck. Most chain kits stand off the decks several inches, so they can clear the tips of the blades."

Note: Bob now does have a governor; see Honeymoon Sweet 1953 CJ-3B on CJ3B.info.

Thanks to Bob and the other contributors. -- Derek Redmond

Please note that operating equipment such as this adds additional dangers to the normal dangers associated with driving an open Jeep. Some of those risks are not covered here, and this kind of project should not be undertaken without experience or expert assistance.