Here are some more examples from the Unusual Photos file. These pictures contributed by readers of CJ3B.info show subtle modifications that might not be noticed on first glance, and also vehicles that require a double-take before you even realize you're looking at a CJ-3B. 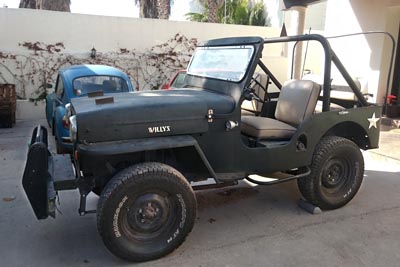 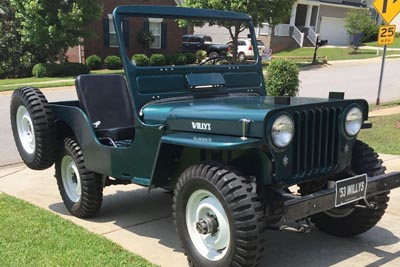 The thing that might cause a double-take when people walk past Scott Page's nice CJ-3A in Hopkins, North Carolina, is the "53 Willys" plate. What? There were no '53 CJ-3As! 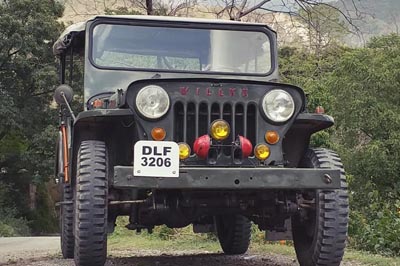 And this may be a unique low-hood CJ-3B. Rajesh Baj cut his radiator guard down to lower the profile while retaining the distinctive features of the front of the 3B -- the stamped Willys name and the headlights outside the grille slots. 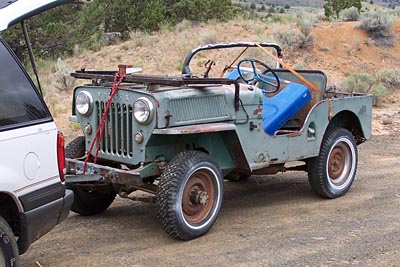 Martin Cunningham grabbed this photo as he prepared to take his new 1954 CJ-3B home. He says, "I just bought this Jeep from a young man in Madras OR -- he was moving, and needed it out of his way. The engine is unfortunately gone, but the rest of the drivetrain is intact. I intend to restore as closely as possible, but may install a Pinto engine, 12-volt system and overdrive."

Well, it's going to be a hard decision whether or not to keep those stylish louvres in the hood. 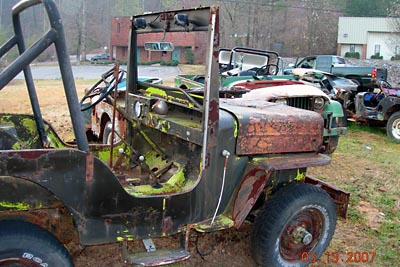 David Simms of Vintage Jeep Supply in Nashville got this photo of an odd 3B from a buddy who thought David might be able to identify the unusual Jeep.

Well, you can never completely rule out another experiment by the engineering department in Toledo, but we haven't heard of any Willys engineering releases referring to a fixed windshield and redesigned dashboard. Stephen Gallagher points out it looks like it was inspired by the vertical windshield of an Arctic Top.

David comments, "If the 3B was modified for postal work then the person did a great job." (See the large copy of the photo, 200K JPEG.) 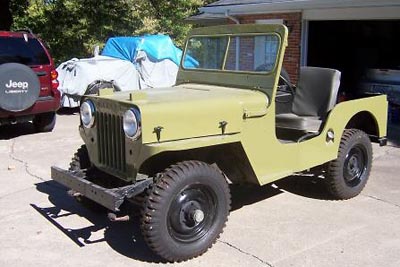 This partially-restored early CJ-3B showed up for sale on eBay, with the explanation that "The wife says I have to get it out of the garage and get rid of it before I start another project!"

The specs mentioned that the engine was from a '46 CJ-2A, but what caught the attention of some of the regulars on the CJ-3B Bulletin Board was again the windshield, seen also in a closer rear view photo (50K JPEG). It looks like the split-pane unit used on the military M38A1, but the consensus once again was that this was a nicely done home-made version. 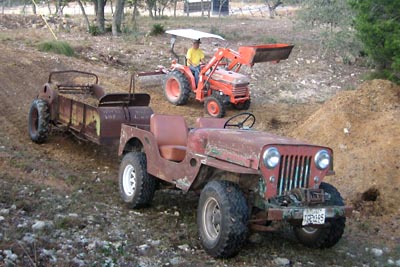 Who needs a windshield on a tractor? Mike Spell in San Antonio, Texas bought this '61 and pulled a manure spreader with the Jeep for about six months before deciding to use the body for his next project, and putting the chassis, drivetrain and front PTO-driven winch up for sale on the CJ-3B Bulletin Board. 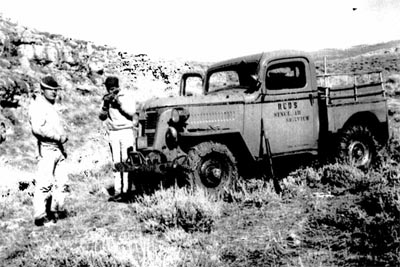 If you're going to replace the windshield, why stop there? This makeover with a '40 Chevy truck cab and a custom bed, is even more complete than the truck cab conversions seen on another page of Unusual CJ-3B Bodywork. It's really only the fenders that give this one away. Jim Graves, who has a collection of flatfenders in Ventura CA dug out these old photos of a Jeep that his cousin's friend had in central Wyoming in the early 1960s. He says, "They used it for hunting near Riverton. The name of the guy who built it was Red. We lost track of the Jeep in the late sixties when Red passed away. It may be still running around in Wyoming."

A rear view photo (100K JPEG) was taken after a successful day of deer hunting. 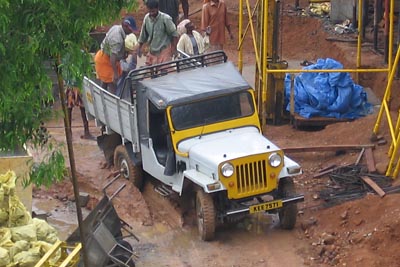 Another stakebed conversion is this very neat and very long Mahindra, photographed by C.N. Sreejith at a construction site in Thiruvananthapuram, India. Sreejith says, "When this picture was taken, the Jeep had just towed a concrete mixer onto the site. It waded through the mud easily. See how deep in mud the rear wheel stands. I reckon from the registration number that this is an early 80's model." 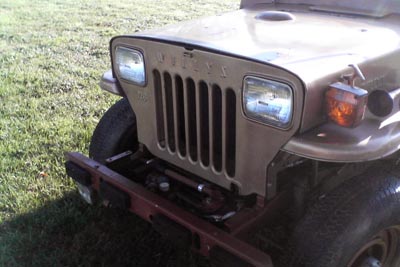 Jason Crawford wrote on the CJ-3B Bulletin Board, "While on patrol this morning I came across this... umm... thing sitting for sale. It looks like a 3B maybe, but with square headlights? The owner wasn't home but the wife informed me it was a '49 Willys although she didn't know which model. Sorry I only got the one pic. I got a call and had to leave."

Larry in Texas commented, "It appears that someone performed a fairly decent job fitting those headlamps into the grille.But it's like pie r square and cornbread r round; we all know that pie r round and cornbread r square, tee hee. I ain't no correct police, but 3B grilles have round holes for headlamps or they ain't right in my book, ha!" 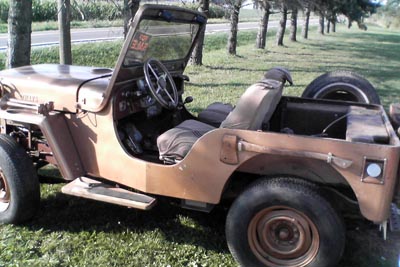 Jason added later, "Well, I spoke to the owner. It appears this is titled as a '49 CJ-2A, S.N. 216221, but it does not have any data plates. The motor has been replaced with an F-head (70K JPEG), and the hood clearanced to fit. My best guess is that this is some sort of aftermarket tub that came with square headlights (60K JPEG). The grille is one piece and has not been modified. Note that there are no marker lights in the grille. The hood is apparently aftermarket and you can see where the WILLYS stampings have been welded into the hood (70K JPEG).

"Some of the things I found interesting were the extra pumps throughout the Jeep. Notice the one behind the front bumper (70K JPEG) and the other one under the hood where the data plate should be." (There is also a large bracket on the right front fender (70K JPEG), and air horns and an axe mounted on the left, suggesting possible use as some kind of fire Jeep.)

Ken Bushdiecker noted the stamped border around the headlights, and the stamped "Jeep" below the right headlight, as well as mentioning the similarity to the late 80's Mahindra Bahia. Anybody know the source of this grille? 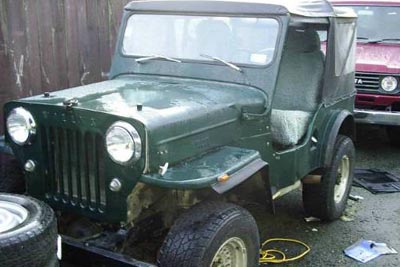 This 1953 CJ-3B was posted for sale on TradeMe in New Zealand. It doesn't look too unusual from the outside, but the Toyota behind it in the driveway is a hint about what you'll see inside. 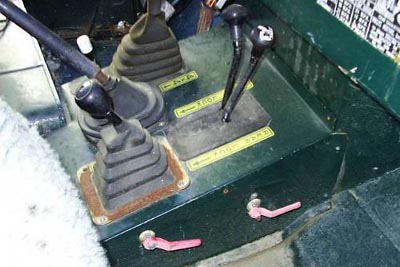 A Toyota Land Cruiser 5-speed gearbox and transfer case and locking differentials are the reasons for all these levers. The engine is a Chev 350, and there is also an auxiliary fuel tank under the passenger seat.