There is one particular civilian hardtop which owes so much to its military predecessor, that it should not be mentioned without discussing its military origins -- the Arctic Top. 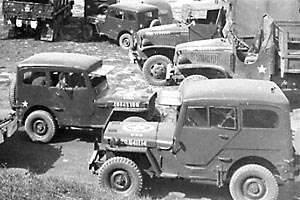 A hard top on military jeeps was not a brand new idea in the 1950s. Around the end of World War II, cold weather hard tops as seen here were being manufactured at a plant in Steyr, Austria. Photo from Jim Allen's collection.

The Steyr tops have unusually wide doors, reaching back about ten inches behind the opening of the rear wheel well. The rear section of the large window apparently swings open for ventilation. The Steyr doors are hinged to the diagonal windshield frame and swing open and up, so that when fully opened the bottom angled section is above the front fender. (See what happens when a similar door is opened on an Icelandic hardtop (50K JPEG) in the movie Children Of Nature.) 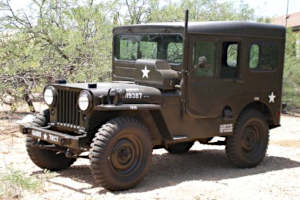 The military commissioned a cold weather top, or "closure," for use on the new M38 Jeep which went into production in 1950. It saw action during the Korean war, and has a reputation as being the best-built aluminum top for either military or civilian Jeeps. Full winter equipment included a gas-operated heater mounted outside on the cowl, with hot air ducted through the vent in the windshield frame.

The actual name of the top from the Willys-Overland identifying tag is "Cab-Closure Hard Top." We should really use that designation, because the term "arctic top" was only a nickname. The actual trade name "Arctic Top" belonged to the civilian top made by Metro Engineering (see below.) 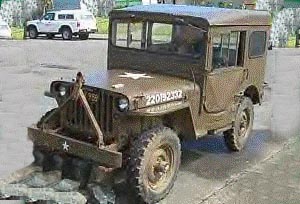 In this example the closure is used on a World War II GPW, which is incorrect, but it fits perfectly.

When the M38 closure was designed, the Steyr door hinged to the sloping windshield was not considered an adequate solution. It was possibly too dangerous as it could crush careless fingers when swinging shut. Instead, the standard M38 windshield was discarded and replaced with a modified windshield which was set in the vertical position. This change of position of the windshield allows the door to open on a vertical hinge, eliminating the dangers of the Steyr door.

In the installation instructions, the term "arctic top" is not used. This diagram provided by Wes Knettle from the manual, shows the difference between the hardtop windshield and the standard windshield. The arms go straight down and bolt directly to the cowl, instead of bending forward to a pivot. The Jeep can be driven using this windshield with the top removed (see Mark Hallenbeck's M38, 20K JPEG) but the windshield does not fold down.

The door has a two-pane sliding window, probably the largest area of door glass until the mid-1950s when Koenig built its Super Cab with full-sized doors and windows. 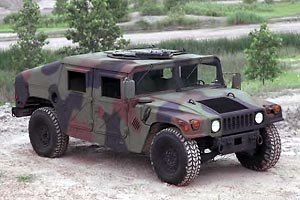 If the military Humvee built by AM General is reminiscent of a jeep with an "Arctic Top" it is in part because the windshield and door operate the same way, the windshield being vertical and serving as a solid door jamb, allowing it to swing safely shut. 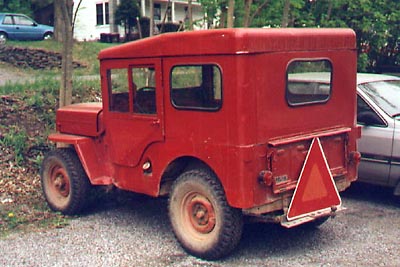 Some civilian Jeep owners have fitted the original M38 "arctic top" to their vehicles. Here Charlie Eccher has installed one on his 1953 CJ-3B. The windshield frame had to be disconnected and moved to vertical (see a side view photo, 60K JPEG) but apparently did not need to be modified for the top to work. The windshield pivot has been relocated -- a close-up view (30K JPEG) shows the new location of the pivot, about an inch behind the bottom corner of the hood, roughly 3-1/2 to 4 inches below its old location. The fact that the old holes for the windshield mount are filled, suggests that the top was meant to be permanent. 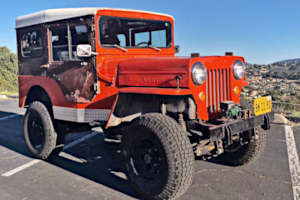 A 2019 installation on Francesco Fragomeni's CJ-3B also repositions the original windshield, and a closeup of the new pivot point (200K JPEG) shows an epoxy wedge neatly filling the gap under the door hinge. See California Jeep With an Arctic Top on CJ3B.info for details. 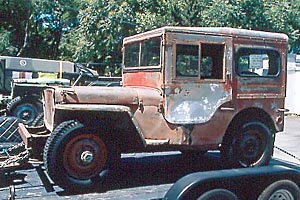 In fact there is a civilian near-copy of the M38 closure which has no connection with Willys-Overland or the U.S. military. It is similar in appearance but there are differences. In this photo a civilian Arctic Top is seen installed on a World War II MB. The door looks caved in but it was designed that way to manage the angle in the tub side. In the civilian version (as on the military version) the ventilating windshield is unique to the top and cannot be used as a standard windshield on an MB, 2A, or 3A/3B. Photo courtesy Jim Allen. 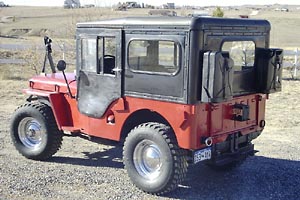 Randy Andrews has a civilian Arctic Top in very nice condition on his 1947 CJ-2A. His top has a tag identifying it as the "Arctic Top" and the manufacturer as Metro Engineering and Manufacturing Co. of Detroit, Michigan. Technically, because it is the brand name and not a nickname, this civilian version is the real "Arctic Top."

Thanks to Kurt Willinger and Gene Gurney's The American Jeep in War and Peace for some history. -- Bart McNeil

Continue to Hardtops of Attu Island or return to the Table of Contents.

Thanks to Bart, and to Steve Bovee who sent the West Coast Willys article. Also to the other photo contributors and to Charlie Eccher, whose CJ-3B has recently been restored. The GPW photo is unidentified and we would like to hear from its owner for attribution. -- Derek Redmond