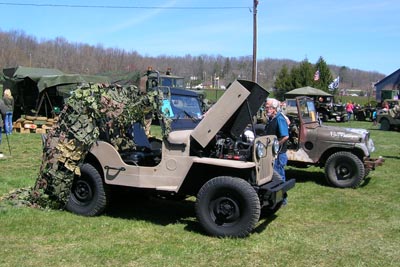 A more relaxed kind of show: the Military Transport Association Spring Swap Meet on 16 April 2016, at the fairgrounds in Sussex County, New Jersey. Michael Davis lives nearby and likes to take his 1960 CJ-3B to shows when he's not on the trails. For this event he got into the military spirit with some camo netting. 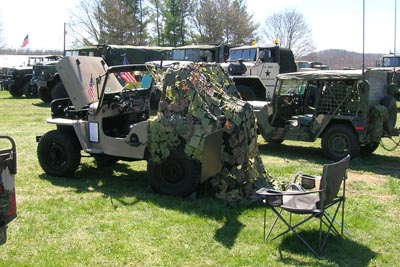 With the desert tan paint and the tailgate-mounted spare, Michael's Jeep has kind of a military look anyway -- only the original CJ-3B-style black windshield is a real giveaway. 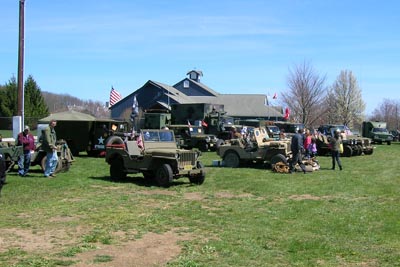 Of course there were lots of other military and wanna-be-military Jeeps at the MTA show, which is one of the prime events for military vehicle collectors and vendors on the east coast. 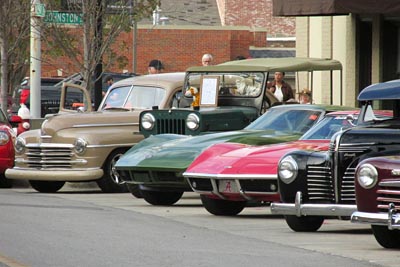 The same weekend, the weather was great for the "3rd Friday" classic car show in Decatur, Alabama on 15 April 2016. Lawrence Wade took his "Family Tradition" 1955 CJ-3B downtown and got a great spot with some of the other streamlined classics. Looks like a '44 and '46 Plymouth and a couple of 70's Stingrays. 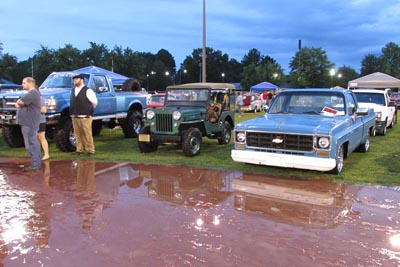 The weather doesn't always co-operate at these car shows. Lawrence's new Beachwood top is a good solution for taking the Jeep when there's a chance of showers. This is at Veterans Park in Priceville AL, a small town near Decatur. Each year they have a fall car show with about 600 vehicles. 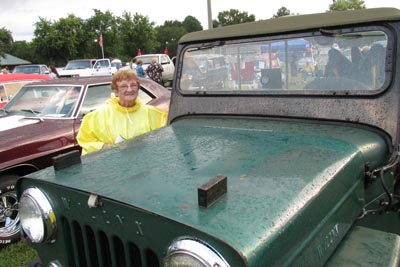 It helps to have a family who don't mind getting a bit wet. Here's a great shot of Ora Lee smiling gamely in her poncho.

Sad news as of 2019: Ora Lee who, was always smiling and loved the CJ-3B, passed away on Sunday, 15 December. She will be very much missed. 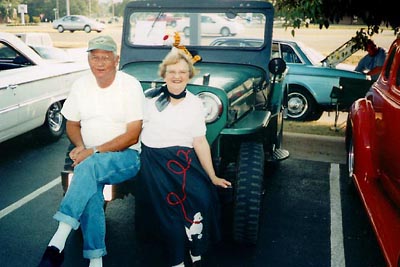 Back to the fifties! From a few years ago, this is a CJ3B.info family portrait of Lawrence and Ora Lee, who always enjoyed the socializing at car shows and Christmas Parades. 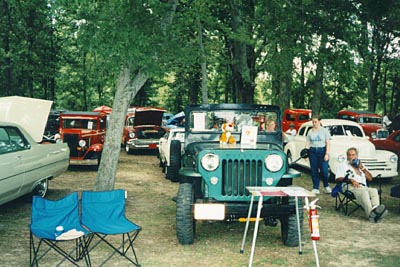 Back in the year 2000, there were over 300 entries in the Point Mallard Memorial Day Antique Automobile Show in Decatur. They ranged from 1922 Fords to late-sixties GTO's and Corvettes -- lots of very beautiful cars. Twenty-five trophies were awarded, to the entries judged to be the top twenty-five vehicles in the show overall.

Surprise! (Or not, for readers of CJ3B.info.) Lawrence Wade's original and unrestored 1955 Universal Jeep CJ-3B was awarded one of the twenty-five trophies. 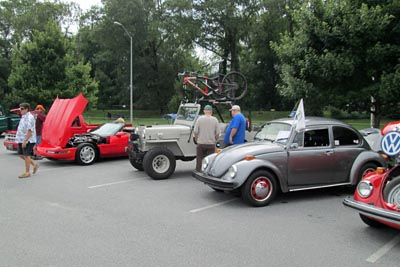 CJ-3B owner Mark "Goose" Dulken in North Carolina said, "I thought, why not... so I entered a local car show that supported local charities. Me and one other (see the Jeepster, 110K JPEG) were representing Willys." 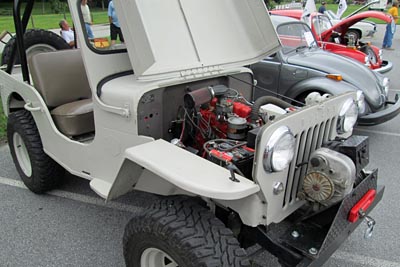 Many CJ3B.info readers had followed Goose's rebuild of his '63, and given him encouragement, on the CJ-3B Bulletin Board in 2010. The Jeep had been in his family for many years, and he gave it a new lease on life. 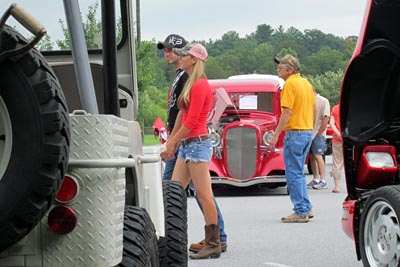 This was the first year for the Greater Fletcher Lions Club Car Show, held to raise money for scholarships. See a wider view (100K JPEG). 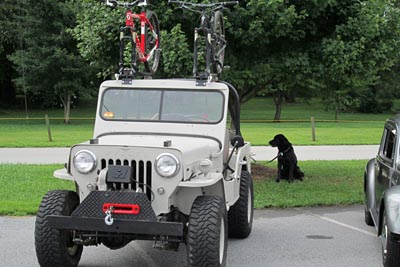 CJ-3B, a true multipurpose vehicle. The weekends prior to the car show, Goose had been 4-wheeling (230K JPEG) and camping (200K JPEG) in the Jeep. After the show, Goose said, "I drove home in the rain without a care and knowing all those polished hotrods would take hours to clean and buff again." 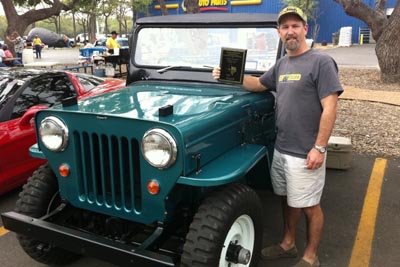 Chet Couvillon in Texas has been taking his 1965 CJ-3B around to some shows since completing his restoration in 2010. Here he's holding a first place plaque (100K JPEG) at Lester's Automotive 4th Annual Car Show in Boerne TX on 2 April 2011. 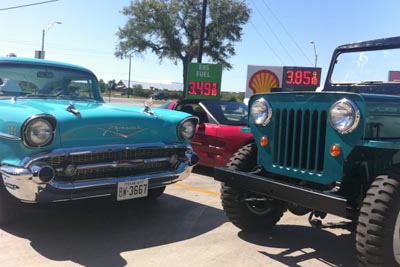 In May, Chet wrote, "Went topless today over to the neighborhood cruise-in, a gathering of the South Texas Car Club, and posed the 'B' next to a very nice '57 Chevy. The fuel prices in the background tell you it's not 1960!

"The highlight of the morning was getting to meet Kenneth and Tammy from Jourdanton who also have a family-owned 3B. We made plans to get the Jeeps together for a photo soon!" 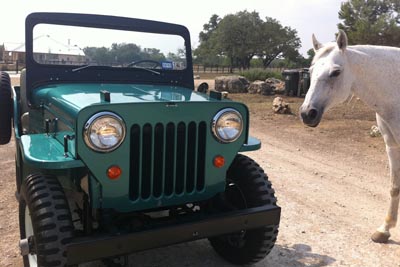 "Horse face Jeep" is a Brazilian term we first heard about years ago, from Fernando Varela who has built-up a couple of late-model high hoods in Brazil. Chet has adopted the nickname for his YouTube channel called Horse Face Films, displaying the videos he's shot with his GoPro HD Motorsports camera. 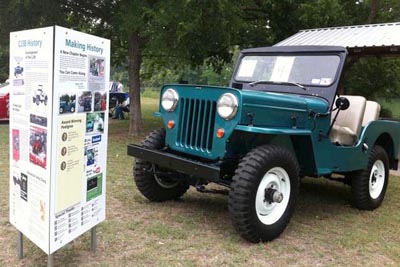 Chet has made a real nice 3-sided display panel for the shows, using old family photos and information from CJ3B.info. It's seen here at the Blanco Classic Car Show on 21 May.

He's also getting the word out about his CJ-3B on the web; check out his Facebook page called High Hood Hijinks. 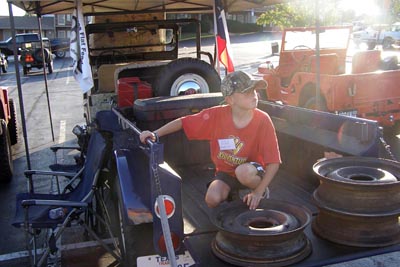 Jamie Powers took his Jeep, his trailer and his son, up from Texas to the Midwest Willys Fall Reunion in Jefferson City, Missouri in September 2010. 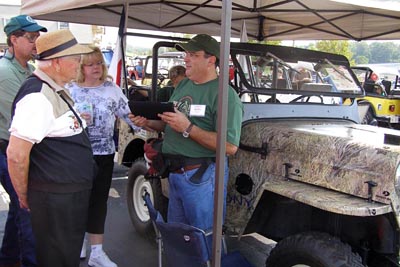 Jamie's vinyl-wrapped '63 attracted lots of attention at the Reunion, and it looks like he was showing them CJ3B.info on his iPad. Thanks to Jason Brock for the photos. 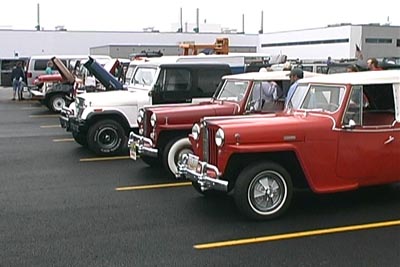 The employees of the Jeep factory in Toledo, Ohio held their annual Father's Day Car Show on 18 June, 2000. As usual, there were quite a few Jeeps in attendance -- everything from MB's to Grand Cherokees, from elegant late-forties Jeepsters to monster rock-crawling Wranglers. 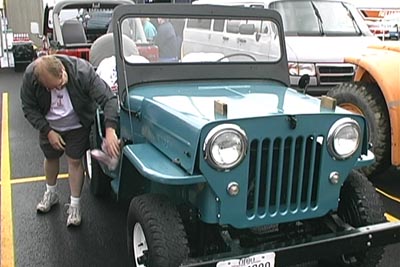 Quite a few double-takes were caused this year by Barry Hannaker's high-hood Jeep. It's the star of Willys-Overland Motors' recent full-page magazine ad for their "Repli-Tub" replacement bodies.

In fact, it's not an original CJ-3B at all, but a 1948 CJ-2A still complete with an L-head engine (50K JPEG). It had been given a 1958 3B body by a previous owner, and Barry added repro fenders from W-O in Toledo. He's now on the lookout for an F-head to put under the high hood.

See also a photo of the interior (50K JPEG).

Thanks to all the owners. If you've been to a show, send me some photos. -- Derek Redmond