Bates Wilson was the superintendent of Arches National Monument in southeastern Utah in the 1950s, and dedicated countless hours to exploring the vast canyon country nearby. In 1957 he recommended creating a National Park, and his famous camping trips and cowboy cookouts helped persuade the country's decision-makers; by 1961 he was joined in his campaign by Secretary of the Interior Stewart Udall. President Lyndon B. Johnson signed the bill establishing Canyonlands National Park in 1964, and Bates Wilson became its first superintendent.(1)

Alan D. "Tug" Wilson was Bates Wilson's son, and as a teenager assisted him mapping the canyon lands. Tug also made many trips into the area with the Explorer Scouts of Moab, Utah, and hired himself out as a guide for tourists. In his late teens Tug Wilson (70K JPEG) bought his own Jeep, allowing him to explore further and more often.(2)

Many of the pictures on this page are Tug's own photos of his Jeep trips, courtesy of the National Park Service(3) and Tug's stories here come from a 1993 interview with Lloyd Pierson.(4) 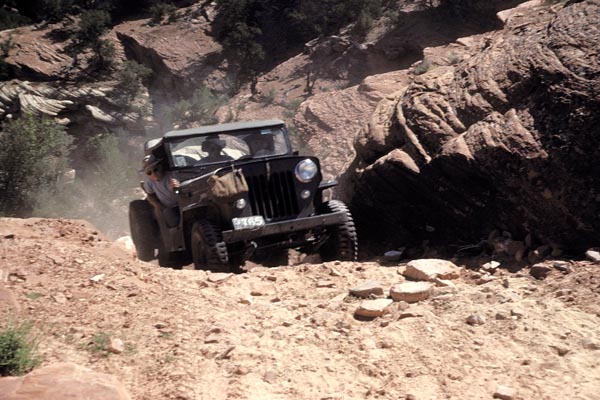 Tug Wilson coming up Elephant Hill in his 1954 CJ-3B, with what appears to be a 1954 Utah license plate (white on green.) The Jeep has the original NDT tires and no radiator screen in this photo, which would make it the earliest picture seen here. Almost every photo shows a different plate number on the Jeep, so these pictures were taken throughout the decade.

Tug remembers: "My mother was a very good manager of money but there was basically no money. So I became independent very early. After doing the guide work for a summer and on and off after that, then I learned the electrical business to become really independent. I think it was fall of '52 that I bought my first Jeep (the used '48.) Then I bought my brand new one in '54 when I staked nine uranium claims and sold them for $200 apiece.

"Bob Robertson and I were interested in photography and we both had cameras. We began taking pictures as early as we went in. I still have those slides. In fact, they were the base of the slides used for the hearing when it went before Congress (to create the park.)

"The Jeep trips continued when we were in college. When we came back from college in the spring, the Scouts still got together and went in. We would go as two or three vehicles up through the late fifties."(4) 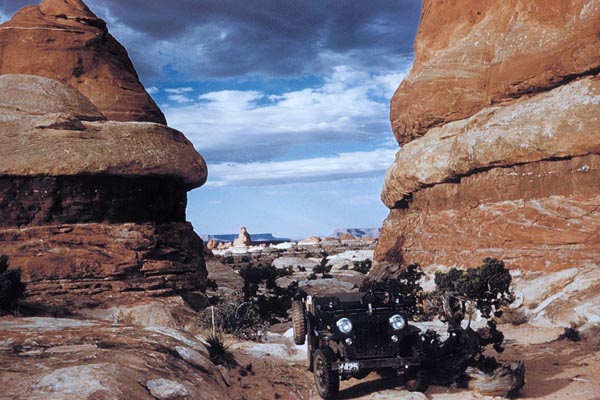 A nice pose at what is now known as the Silver Stairs, identified by the NPS as being taken in 1953. But it looks like probably a 1955 plate (white on black.) Tug had added a chaff screen to his front radiator guard, but still had the original tires.

"The funny story was Merle and Ray, in that Ray Garner was not a person who liked to get up early, and Merle was always at work by at least 7:30, maybe even earlier than 7:00. It gets hot in the desert and Merle liked to cook, get camp over with, Jeep packed and get going. Ray just wouldn't get out of his tent. So one day near the end of the trip, so Merle tells it, being a man of very few words, in Devil's Lane he was really getting annoyed with Garner. I think being cramped in a little CJ Jeep you would get a little testy after a few weeks in the Needles.

"He carried somewhere between half and a case of dynamite on this trip, to make road if he needed to. He never went anywhere without dynamite. He was a guy who could build anything with a few sticks of dynamite. Since he was on his way out he decided to give Ray Garner a very good wake up call in the morning on the last day. He blew up the dynamite. Ray came bolting out of the tent wondering what in the hell had happened. I am sure Merle had a grin cheek to cheek."(4) 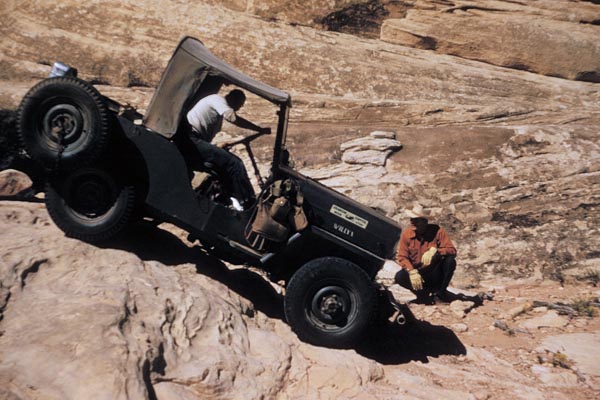 Taking it easy down Elephant Hill, which is still a popular four-wheeling spot in 2014. By this point, Tug had new tires and also a sticker on each side of his hood proclaiming "Uranium Capitol, Moab Utah," so this is probably later than the pictures above.

Moab did indeed become famous as "Uranium Capitol of the World" when the mining industry arrived in the early 1950s.(5)

But in the Needles District, Tug recalls, "That area had not, as far as I know, had very much uranium exploration at all. The road over Elephant Hill and those things were really just for the Scorup-Sommerville (ranch) who had a couple of stock tanks or pens. They may have built the rough road over Elephant Hill just to doze a stock tank or two in and around Chesler Park.

"I never heard my father say the ranchers were terribly upset (by the creation of the park) although I'm sure Scorup-Somerville who were running cattle in what is now Canyonlands, Needles in particular, at that time, were not very happy. But there wasn’t very much land that was particularly good for grazing that was being included in the park. The canyons and the rocks don't really provide much feed.

"The people who were really upset were the mining interests. The mining/oil interests became very nasty against my father and anyone else who supported it because they felt that it was their land to do whatever they wanted. During that time the Atomic Energy Commission gave the license to essentially go wherever you wanted with a bulldozer and drill a hole in the ground. Some guy says 'I want a drill hole out there' and they'd just lower the blade on a D8 Caterpillar and plow up whatever was in the way. It was very destructive."(4) 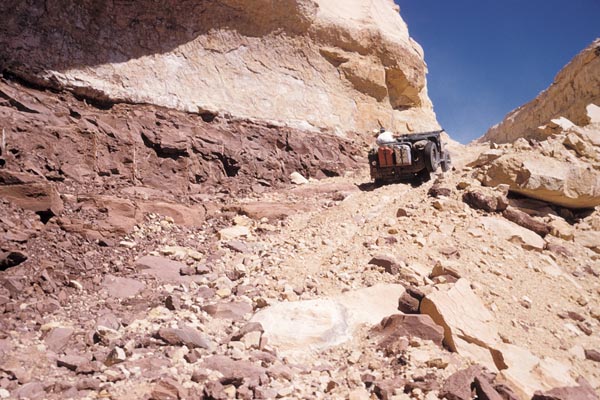 Tug's CJ-3B in an undated photo taken on the road below White Crack (now closed to vehicles.) The mud on license plate 2543 makes it hard to identify, but it could be a blue 1957 plate.

"In '53 we had gone over Elephant Hill. I had my Jeep, my first Jeep. Monk Bailey had a little yellow Jeep and I think Bob Robertson had a Jeep of his uncle or his father, a brand new one. Anyway, we spent two weeks in the Needles. Father came for one week and Bill Hines came. We wrapped a deer in a bedroll in a tarp, Monk Bailey’s tarp. We would unroll one layer a day to have our meat. It had been frozen.

"Near the end of the trip we're camped at Angel Arch (180K JPEG). We drank coffee, but somebody had miscalculated how much coffee we needed for the trip, which was not uncommon. Anyway, they never dumped the grounds out, so every morning they would just boil this pot up again. Anyway, we're eating breakfast and a cowboy comes riding down from upper Salt Creek on a beautiful horse and he sees this motley crew. We asked him, 'Like to have a cup of coffee? and he says, 'I'd never turn a cup of coffee down.' So he gets off his horse, dropped the rein, sits down on his haunches and Monk Bailey pours him a cup of coffee. He took about four sips of that, said not another word, got back on his horse and rode off. It must have been terrible."(4) 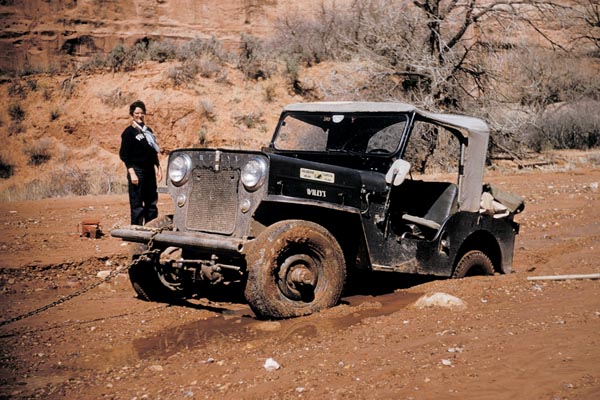 This photo is identified as "Tug's Jeep, stuck in Lavender Canyon, 1957." But the yellow numbers on the flattened license plate indicate he already had his 1958 registration.

The Canyonlands Park website in 2014 still advises travelling in pairs, and warns, "Visitors caught in the backcountry with disabled vehicles can expect commercial towing fees in excess of $1,000."

"There have been questions and or jokes about my Jeeps and the Park Service. Fact is that my Jeeps, the used '48 and later the new '54 CJ-3B, were used by the Arches staff to rescue folks since Arches did not have any 4WD vehicles. I guess I 'loaned them' to dad.

"There was a guy from New Jersey who had a four wheel drive Studebaker pickup truck (stuck in the mud.) My father asked him 'Why in the hell did you drive that truck into this when it's in flood?' He looked at my father and he said 'Superintendent, I did not know it was in flood.' A guy from New Jersey. For a guy living in the east, streams always have water in them!   So Dad changed the sign. The sign said 'Do not cross when in flood.'He changed the sign 'Do not cross when any water is running,' and not another car went in after that."(4) 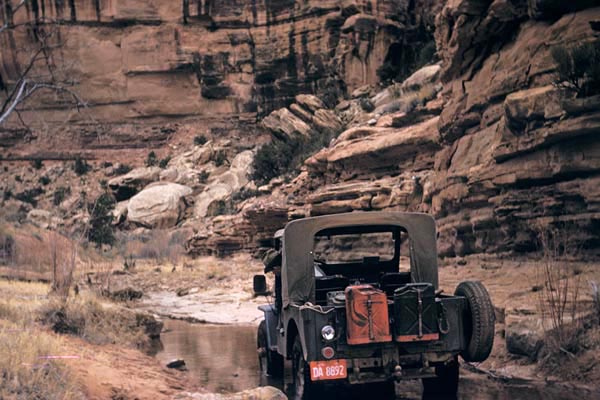 This beautiful photo (200K JPEG) of Tug negotiating carefully in Lavender Canyon, is dated by the NPS as 1957, but the Jeep has a 1959 Utah plate so this is five years before the establishment of Canyonlands National Park.

September 2014 is the 50th anniversary of the creation of the park.

See also the Shank family home movies of Canyonlands in the 1950s, in Mom, Dad, a Jeep and a Teardrop on CJ3B.info. 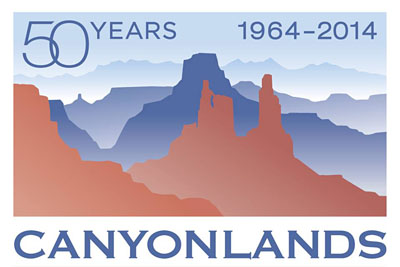 Thanks to Federico Cavedo for his photo research, Lloyd Pierson for the interview. Also Tug Wilson, the National Park Service and John Foster for the photos. -- Derek Redmond