You Do What You Gotta Do:
Hybrid CJ-3Bs

An engine swap you may not have considered: Volvo power 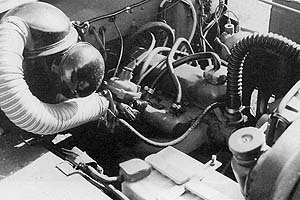 Here's a shot that brings back some memories for me -- of my '72 Volvo 145 station wagon. John Holden in Denmark put this Volvo engine in his former Danish Army CJ-3B back in the 1990's. 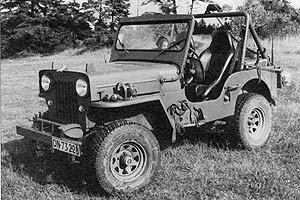 John's 3B is a very nice military surplus Jeep, with a few other modifications besides the engine. John writes, "I am a member of S.O.R.D. (Scandinavian Off-Roaders Denmark) -- we are many military jeeps and a few CJ-3B." 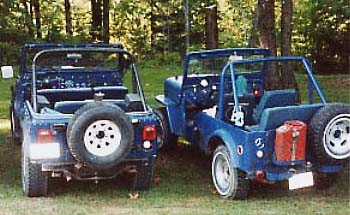 We all know Chrysler and Daimler merged for a while, but Chris Farrer of British Columbia, Canada, has a 1970 Jeep (on the right in the photo) with Mercedes emblems front and rear, and a Mercedes hood ornament (20K JPEG).

The Jeep is a long-wheelbase Mahindra "CJ-4" (see a side view, 25K JPEG.) Manufactured in India, it was apparently shipped to Yugoslavia, and from there eventually found its way to Canada. When the Mercedes 200D diesel engine inside was added is uncertain, but somebody along the way added the decorations, including the 200D plate above the "Jeep" stamped over the grille. 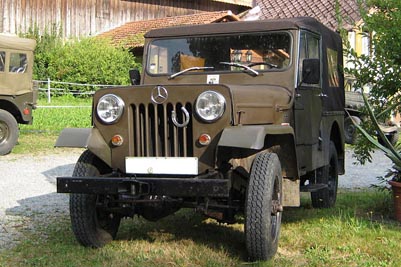 Mercedes diesel conversions of both Mahindra and Willys Jeeps are popular in Germany. This lucky Mahindra likely also has a Daimler-built diesel under the hood.

This photo was taken by Claude of the Jeep Club Deutschland. The occasion was a 2009 gathering to celebrate the 25th anniversary of Willi Rombach's Willys repair shop in the Black Forest of southwestern Germany. Willi's Willys is apparently the place in Germany for repairs and conversions.

Thanks to Bjoern Ott for spotting this. See more Mahindra Jeeps on CJ3B.info.

This photo was taken at a Normandy invasion anniversary parade in France in 1984, and published in Wheels & Tracks magazine with this caption: "Post-war Jeep, inappropriately parading in Bayeux: a CJ3B type, possibly a customized Hotchkiss JH102, but by the time the owner had (proudly) explained that he had installed a 6-cyl. Ford engine the procession had to move on and we didn't see it again."

Ford did build Jeeps in Brasil, but only CJ-5s, not 3B's, so any information about this Jeep is welcomed. Probably another case of an owner wanting to advertise his new powerplant. 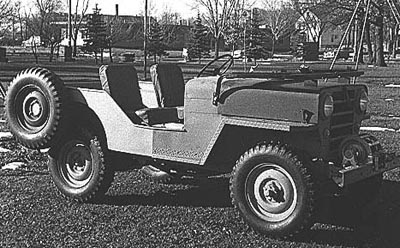 Jim Allen uncovered this photo some time ago and sent it along, looking for more information. He said, "The jeep, which appears very similar to a CJ-3B, was built by the FWD Corp. in the late 1950s. FWD was one of the founding fathers of four-wheel drive, building its first 4x4 in 1908. They were one of the 135 manufacturers asked to submit quarter-ton bids in 1940. The photo was taken in Pioneer Park in Clintonville, right across the street from FWD."

Skip Asbury has let us know that Fred Crismon's new book Modern U.S. Military Vehicles (ISBN 0760305269) includes another photo of the same vehicle, and says FWD built it around 1954 as a prototype for a new military Jeep, but eventually lost out to the M151. Crismon states it used a drive train and engine similar to a Jeep, but had a roomier body, diamond plated steel fenders, and integral Koenig front winch. Skip says the front grille in the photo has what appears to be shutters, something like a WW II halftrack. 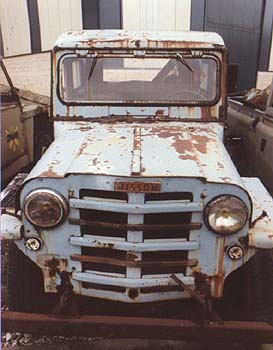 By the way, I wonder if the designers at Nissan had seen the FWD Jeep when they created this variation on the CJ-3B, with a raised panel down the middle of the hood like a Tonka Toy Jeep.

This late-1950s Nissan Patrol was photographed in a scrapyard in Ermua, Spain by Roberto Flores, the same day in 1991 he took a sad photo of some scrapped military 3B's (30K JPEG).

Incidentally, by 1962 the Patrol looked less like the CJ-3B -- see Mike Warner's safari-equipped 1967 Patrol 60 (60K JPEG). The Patrol 60 may even have had some influence on Kaiser Jeep designers -- see The "Flintstonemobile". 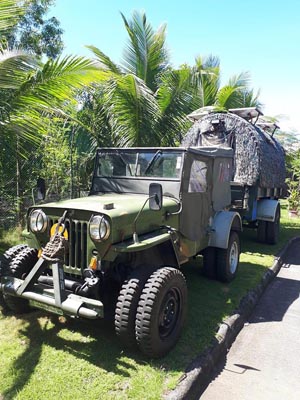 Thanks to David Cavyar for this photo of an overlanding setup in the Philippines -- duallies front and back on a Misubishi J4 high hood. He says the air pressure on the outside tires is lowered to 10 PSI while the inside is 25 PSI.

David describes the other mods: "Pajero Axles, lockers, 5-speed and transfer case. Also Isuzu Diesel engine, power disc brakes and steering, independent front suspension. It performs flawlesly for my intended use, which is deep sand beach driving and camping. It also performs on the road beautifully." 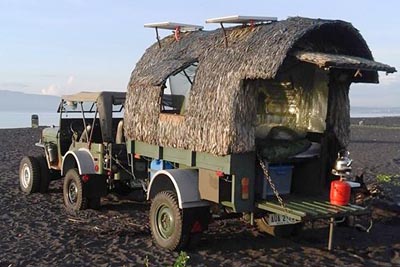 David's setup has a matching dually trailer with a tailgate, seen here on the beach.

By the way, if you are actually thinking of going with DRWs, check out some tips from Fred in Ladies Love Duallies.


Or how about a limo? 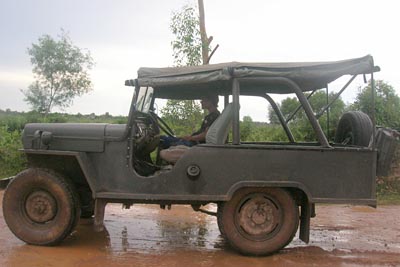 Here's a vehicle with lots of room in the back. The front end and dashboard looks like it could have been a Mitsubishi J4. It's described as a 1964 French Jeep in an ad for scenic tours from the Touich Restaurant in Siem Reap, Cambodia. Thanks to Derrick Dennis for spotting this.