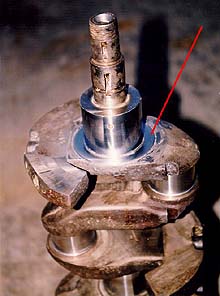 The crankshaft has been chromed. In case you're wondering if I'm building a "chrome monster," I'm not.   :-)   In this case, the chrome is to build up the worn surface where the front main bearing bears (indicated by the red line in the photo.) This area on this crank was worn about .05mm and I couldn't set the crankshaft end play correctly. The machine shop can plate up to .1mm or so and it is a good way to go as it doesn't warp the crank like welding will do.

I took it to another machine shop to get the wax (they use wax to prevent the chrome from plating on unwanted areas) off the crank. The wax is difficult to remove with just solvent and rags. The best and easiest way to get the wax off is to let a shop with a (very hot) "hot tank" clean it. 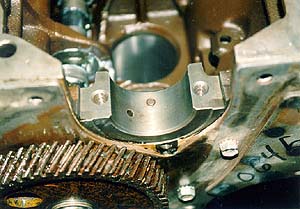 In the center of this picture, in the main bearing bore, is the bearing dowel (see close-up view below). There is only one in the front main. In the remaining bearing bores, there are two--one in the block and one in the bearing cap. Don't lose them when you are disassembling the engine! 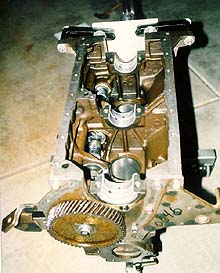 Four of the bearing shell halves are identical. These are placed in the middle and rear main bearing saddles in the block. The front main (closest in the picture) bearing is the only one that has the surfaces that extend over the edge of the machined surface on the engine block.

The surfaces that the bearing shells are placed into must be absolutely clean. The slightest bit of dirt behind the bearing will upset the alignment of the bearing and doom it to a quick failure.

The two front main bearing halves are different from one another. Only one will have the holes for the oil passage and bearing dowel.

Do not install the bearing caps yet. 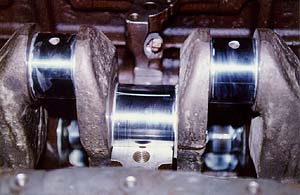 Coat the bearing cap bolt threads with a small amount of oil and install the bolts. Torque one bolt a small amount and then the other an equal amount until you reach 40 ft/lbs (55 N-m) of torque.

Loosen each bolt in small amounts until they are loose and remove the bearing cap. 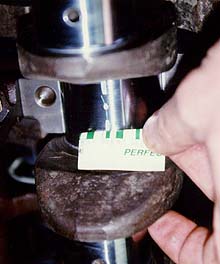 The width of the now flattened plastigauge can be compared with the scale printed on its packaging to determine the bearing clearance. Both inch and metric scales are printed on the plastigauge packaging.

This procedure should be performed on each main bearing. The plastigauge can be removed by scraping with your fingernail or a flat toothpick. -- Eric Lawson

Last updated 9 May 1998 by Derek Redmond redmond@cj3b.info
https://cj3b.info/Engine/Rebuild4.html
All content not credited and previously copyright, is copyright Derek Redmond