Once all of the main bearing clearances have been checked, reinstall the front main bearing. For the following measurements, it is the only bearing that needs to be installed. It is possible to install the front main bearing incorrectly. The numbers cast into the bearing cap should be as shown in the following picture. Also, the oil grooves in both the top and bottom bearing shells should form a continuous passage around the crankshaft's bearing journal. 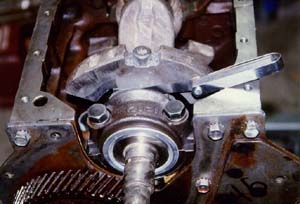 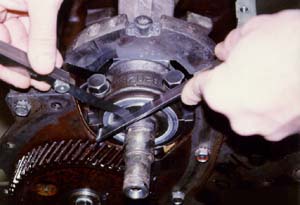 Place a straight edge against the front of the bearing as shown and using a feeler gauge, measure the clearance between the straight edge and the face of the crankshaft.

This clearance is the thickness of the shim pack that will need to be used to set the crankshaft end play.

The shims are .002 inch thick. They have a tendency to stick together; make sure you have individual shims. Once you have determined the number of shims that you will need, remove the crankshaft from the engine.

The shims, followed by the thrust plate and thetiming gear go onto the end of the crankshaft. The side of theparts that you can see in this picture point toward the bearingjournal. After the crankshaft has been temporarily re-installed inthe engine, the spacer, oil slinger and pulley can be placed on thecrankshaft. If you leave the woodruff keys off of the crankshaft,it will make removal of the pulley and timing gear easier. 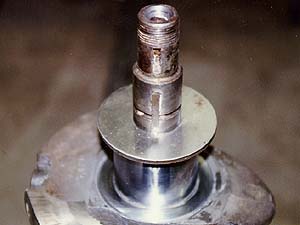 This shows a clearer view of the placement of the thrust plate. Note the bevelled side of the thrust washer faces toward the main bearing journal.

Install the front main bearing cap and torque the bearing cap bolts to their rated torque of 40N-m or 55ft-lbs. 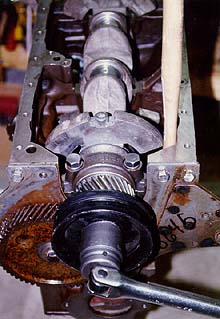 Tighten thecrankshaft pulley nut. A wood hammer handle placed between one ofthe crankshaft counterweights and the block will prevent thecrankshaft from turning while you tighten the nut. As you tightenthe nut, monitor the crankshaft end play. Tightening the nutwithout enough shims behind the thrust plate can damage front mainbearing.

When the crankshaft pulley nut is tight, push the crankshaft toward the rear of the engine and, using a feeler gauge, measure the clearance between the bearing flanges and the crankshaft counterweight. The feeler gauge is placed in the same place as when the initial shim pack estimation was made. The clearance should be .004 to .008 inch. It should be correct. If not, add or remove shims as necessary. Adding 1 shim will increase the end play by .002 inch, while removing 1 shim will decrease the end play by .002 inch.

Once the end play is set correctly, remove the crank pulley nut, thecrank pulley and the crankshaft from the engine. Remove the timinggear. 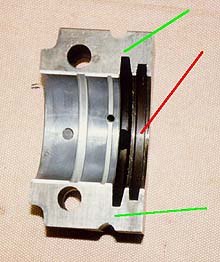 Put a SMALL amount of #2 gasket sealer in the entire groove pointed to by the red line. A toothpick works well to apply the sealer. The sealer will glue the seal in place and keep it from spinning. Also put a small amount of #2 gasket sealer at each of the places shown by the green lines. By applying the sealer only to the bearing cap, the seal in the block can, if necessary, be removed without removing the crankshaft from the engine.

In the bottom of the groove that is next to the green lines is a large hole in the bearing cap. Make sure this hole is open. This allows oil leaving the bearing to flow back into the oil pan. If this hole is plugged, you will never be able to keep oil from leaking out the rear of the engine. 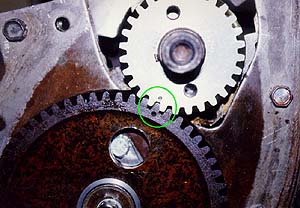 Do not rotate the crankshaft for 24 hours. This will allow the gasket sealer to set up and prevent the rear oil seal from moving. 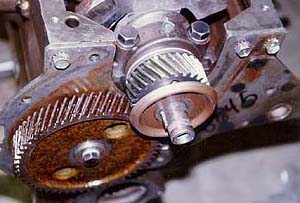 Install the spacer, the oil slinger and the crankshaft pulleywoodruff key. 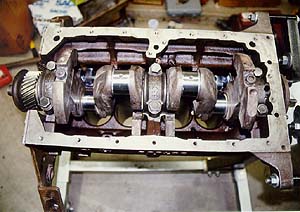 Take a moment to ensure the bearing caps are installed correctly. The casting numbers in the caps should all face the same direction. Also check that the dots on the timing gears are correctly aligned. It is easier to correct any errors now than after the engine has been installed!

After 24 hours, loosen each of the main bearing cap bolts about 1 turn and re-torque the bolts to 65-75ft-lbs (90-100N-m) of torque. Turn the crankshaft slightly as you tighten each of the bolts. Often excess engine assembly lube will remain under the bearings and cause false torque readings as the bolts are tightened. This step ensures that this does not happen.
Continue to Page 6: Rods and Pistons

Last updated 30 May 1998 by Derek Redmond redmond@cj3b.info
https://cj3b.info/Engine/Rebuild5.html
All content not credited and previously copyright, is copyright Derek Redmond