Bob Bullock of Somerset, UK has owned this 1970 Viasa CJ-3B since 2011. The Jeep was built under licence in Spain by VIASA (Vehículos Industriales y Agrícolas, S.A.) for the Spanish Army, and allocated to Regimiento de Artillería Antiaérea No. 73 (RAAA 73) which is "Anti-Aircraft Artillery Regiment No. 73." Powered by a Perkins diesel, it is designated model PE CJ3B.

Bob says, "I had three wartime Jeeps many years ago and fancied something a bit different as a retirement project. I searched the internet and eventually found this Jeep for sale not too far away from my home in the west of England. 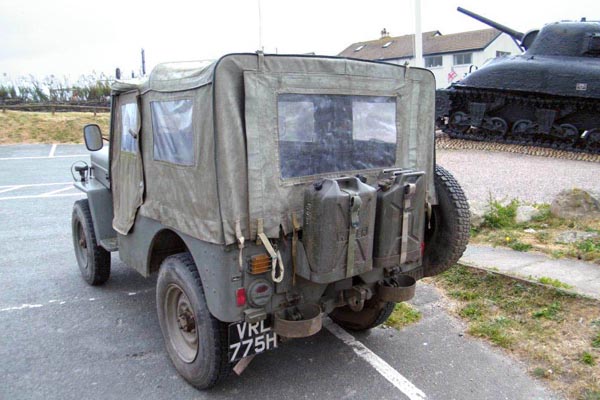 "This is how it arrived. Apart from a new fuel tank and some welding to the floor, the Jeep was original and had full wet weather gear.

"The engine is a Perkins 4-108 diesel and it has a four-speed BW T13 transmission with a Spicer transfer box. It is in very good mechanical condition, having done 60,000 kilometers. There are some fairly minor rust problems and the paintwork is faded." 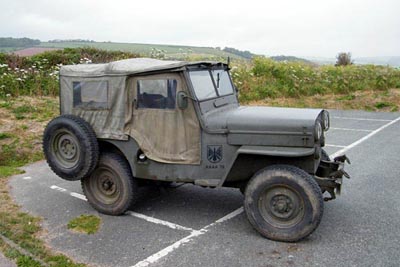 "My Jeep is one of several imported from Spain in 2002 by a trucker who found a lot of them in a Spanish scrap yard. He regularly took truckloads of goods to Spain and often returned empty, but was then able to do a deal and bring these Viasa CJ-3B's back as return loads.

"I aquired mine for half the price of a restored WWII Jeep and it is in excellent original condition complete with quite a lot of spare parts and its original army equipment incuding two gun racks! It carries the RAAA 73 emblem. The Spanish Army used these Viasas until the late 1990s so many of them are still in good condition." 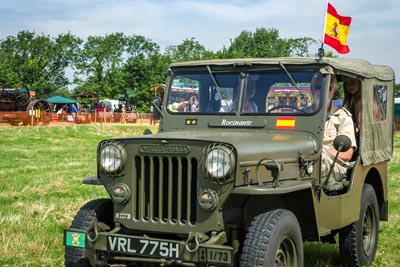 "I have not repainted the Jeep, just given it a good clean and a rub over with WD40! I also fitted a new 'Willys-Viasa' badge to the grille. The name 'Rocinante' comes from the book Don Quixote by Cervantes. Quixote's war horse (in fact a donkey) was called Rocinante so I thought it a suitable name for an old Spanish Jeep."

"This was taken at the Isleport Steam Show in 2015 by photographer Paul Ware. The flag is stuck in a mystery fitting (100K JPEG) on the driver's side of the windscreen, perhaps a radio antenna mount. You can also see the headlamp guards, blackout front marker lights, and 'Jeep' badge." 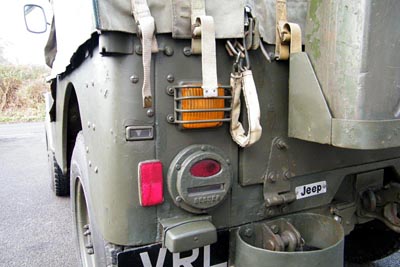 Bob points out more features of the Viasa: "Rear lights and bumperettes. The small light on the outside edge I presume is a convoy light. I can't find another one with this fitting. The bumperettes are quite different to the Willys type and look a bit crude. However all military Viasas seem to have these, presumably to clear the lifting rings. 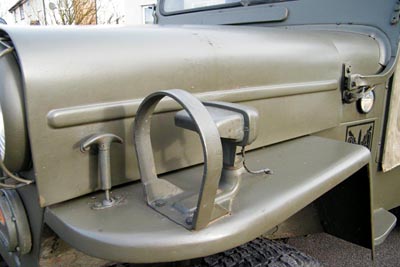 "Modern blackout light. See also a tie down loop (100K JPEG) on the chassis; there are four of these." 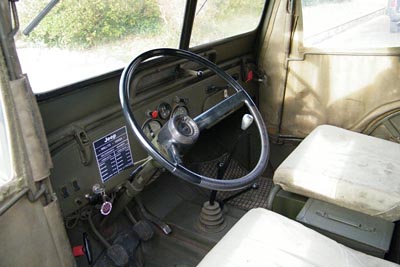 "You can just make out the 'Jeep' logo on the steering wheel. And in 1970 the maximum speeds plate was still labelled 'Willys-Viasa'. Hand brake lever on the left; the hand brake operates on the rear wheels, not a transmission brake. 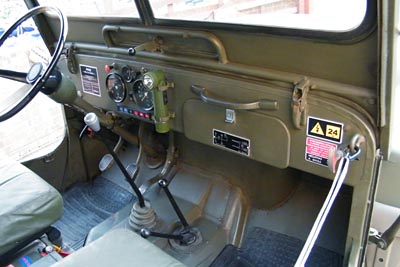 "CJ3B.info gave me lots of information about these Jeeps; I must admit that I knew very little about them before finding the website. But interestingly, on the Military Jeeps in Spain page it said that the diesel Viasas did not have the under-seat tool box. Well, this Viasa had one, under the drivers seat!" (100K JPEG) 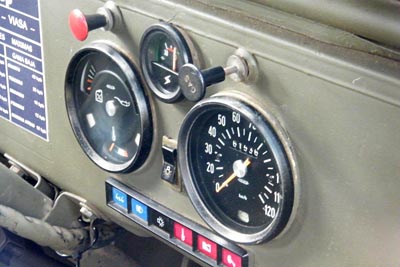 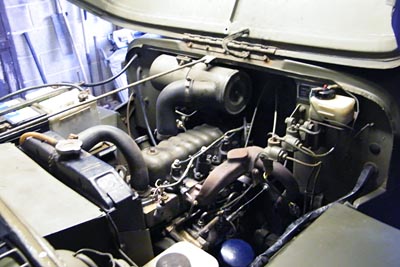 The Perkins diesel shares the engine compartment with two 12-volt batteries in series.

"The serial number plate (100K JPEG) just behind the brake reservoir, identifies the Perkins-powered model as a PE CJ3B, and the builder as 'CAF', parent corporation of VIASA." (See the history of Los Jeeps: Made in Spain on CJ3B.info.) 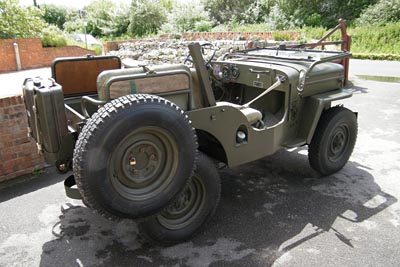 "The diesel-engined Viasas all had the fuel filler on the passengers side. I think it's because the fuel filter and fuel pump are on that side of the motor, giving a more direct run for the fuel pipe and the return pipe to the fuel tank.

"Rather than hood blocks to support the windscreen when folded down, there are two rubber bumpers (100K JPEG) on the windscreen." 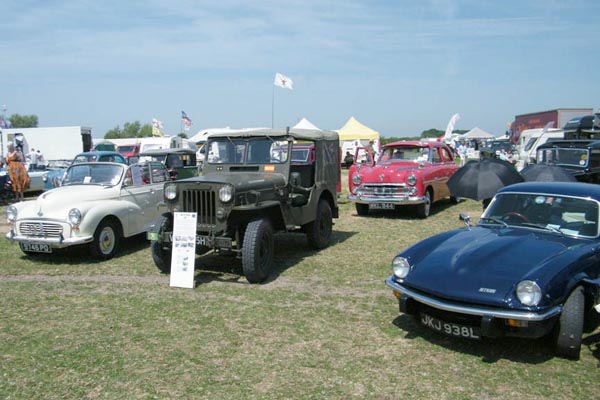 Bob has taken the Viasa to many military and classic car shows over the years he has owned it: "At this 2013 vintage car rally, it was the only Jeep there but created quite a lot of interest. You may wonder why I put the canvas top back on, but it was forecast to be over 90 degrees so I wanted some shade!" 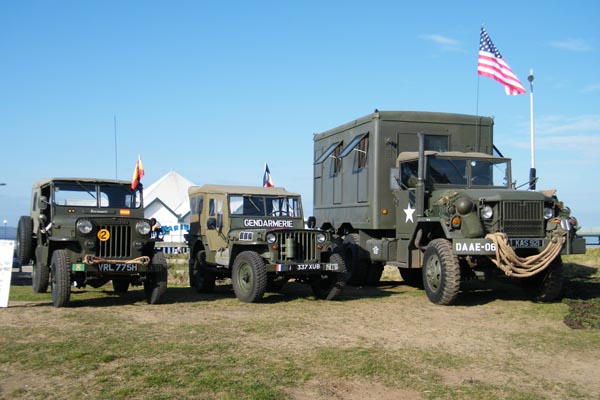 Sometimes there are other military vehicles on hand. This photo was taken in 2015 at the Weston-super-Mare air show. The Viasa is joined by a 1954 Hotchkiss M201 (see Jeeps in France on CJ3B.info) belonging to Mark Bradley, and a Reo truck owned by Bill Hembury. 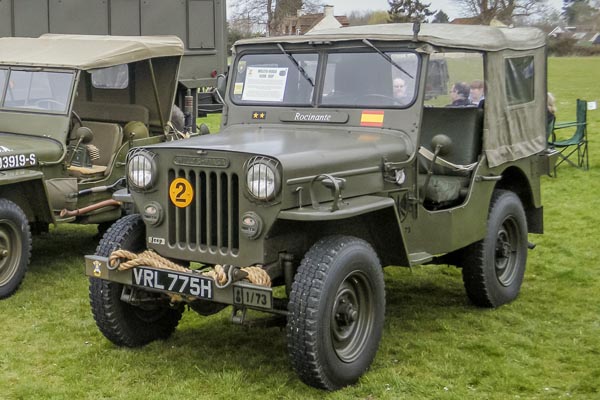 Bob took this photo in 2016 at Westonzoyland Airfield near Bridgewater, a WWII airfield used by the US Army Air Forces, and later by the RAF for testing the new Meteor jet fighters. An aviation museum is currently being established there. 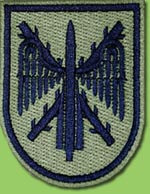 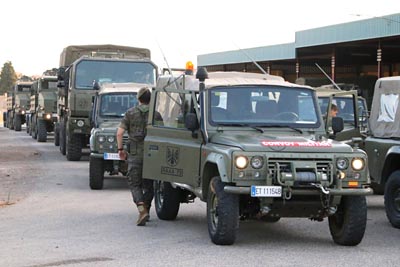 Meanwhile, Spain's Regimiento de Artillería Antiaérea No. 73 (RAAA 73) is now using the Santana PS10, a Spanish descendant of the Land Rover, known in Spain as the Santana Aníbal, and seen here deploying for Operation Gray Cloud exercises in 2016. 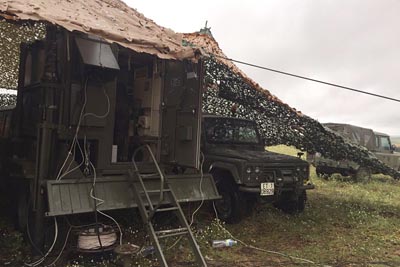 RAAA 73 is part of the Mando de Artillería Antiaérea ("Air Defence Command") and is based at Cartagena on the Mediterranean coast. In this photo, the Santanas are on exercise near Albacete, 200km inland from Cartagena. 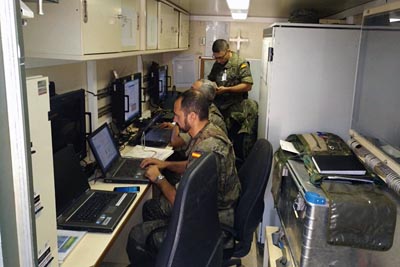 As of 2016, RAAA 73 was operating an Oerlikon Skyguard air defense system which can be deployed on mobile platforms at short notice, and fires Aspide surface-to-air missiles (Wikipedia). 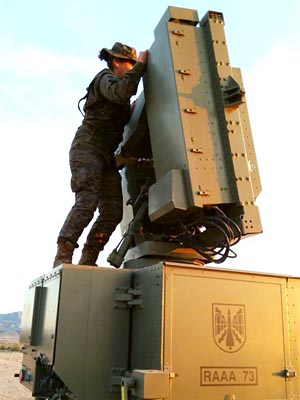 Thanks to Bob Bullock for the photos and story of his Jeep. Thanks to Martinez on Twitter for the RAAA 73 photos. The coat of arms of the Mando de Artillería Antiaérea is by Heralder via CC. -- Derek Redmond