Another vision of the CJ-3B

What if Willys-Overland had been wildly successful in their attempts to market the Universal Jeep as a farm vehicle? What if the CJ-3B had sold in ever-increasing numbers as a practical on/off-road substitute for a tractor and a small truck, rather than as a recreational vehicle? Would Willys have kept a boxy design, and developed the Jeep in the direction of simplicity and reliability rather than horsepower and comfort? Here's a cousin of the Jeep, which demonstrates what the CJ-3B might have developed into. 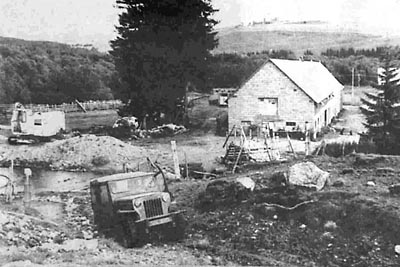 In 1946, Bernard Cournil, a mechanic in Aurillac (the capital of The Cantal, in the mountainous center of France) saw the need for a small 4x4 tractor with a low center of gravity, and began to modify surplus Jeeps from the Second World War, for agricultural use in the difficult mountainous terrain of his area. 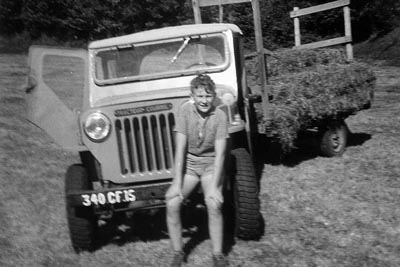 As soon as Hotchkiss in Paris started building CJ-3Bs in 1954, Cournil began converting them with diesel engines and reinforced frames. This photo reportedly shows Cournil's son, with an early Tracteur Cournil conversion of a Hotchkiss JH-101. 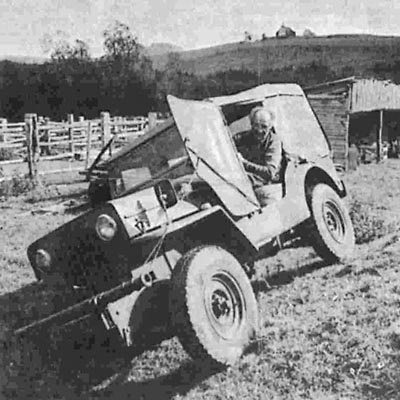 Cournil then progressed to building his own vehicles, still using a considerable number of Jeep parts including a Hotchkiss body, on a heavy frame of rectangular tubing. 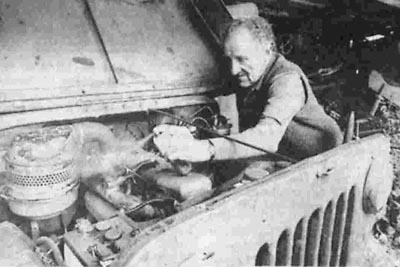 The Cournil Jeep tractors were powered by Standard Massey Ferguson-Hotchkiss diesel tractor engines, with heavy-duty gearboxes and other reinforced components, and implement lifts, all mounted on the massive tubular frame. 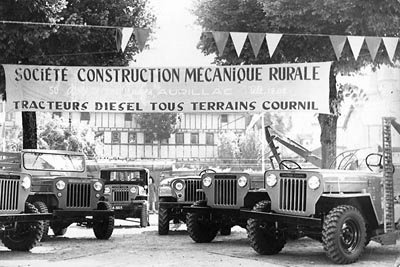 In 1961, Courillon's company Société Construction Mechanique Rurale gave up the Jeep body for a new design, welded to the heavy frame (see below).

The new 1961 model known as JA1 had some similarities to the direction taken by Kaiser Jeep with the Fleetvan and Forward Control trucks, and it certainly reflected the Brooks Stevens principle of creative thinking using available components. (The CJ-3B itself almost evolved in this direction -- see the sloped-hood CJ-3B (190K JPEG) from New Universal Jeep Designs, 1949-53.) 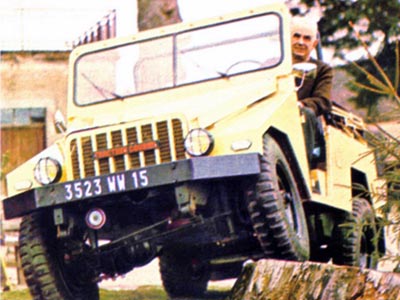 The postwar years spent modifying Jeeps paid off in the 1960s for Bernard Cournil, a blacksmith's son who had become a hero of the French Resistance by operating a secret airfield during the war. His shop in Aurillac built some 1200 tractors and 160 trailers during the sixties.

But as people moved from rural areas to the cities and imported 4x4s became cheaper, the market shrank, and after a 1970 bankruptcy the company only survived until 1977. 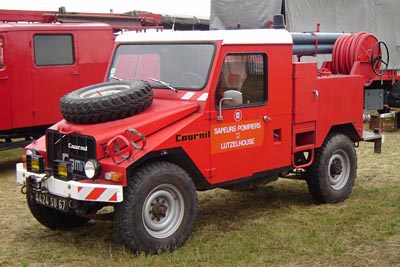 The Cournil was built with different wheelbases and various accessories, all designed for hard work in difficult conditions including mining and agriculture. This fire engine conversion was photographed in Lutzelhouse in northeastern France by pinpon-passion.

The vehicle name disappeared in 1977, but the design was sold to two companies who continued to use it: UMM in Portugal who built the Alter until 2004, and Auverland in France and Brazil until 2002. 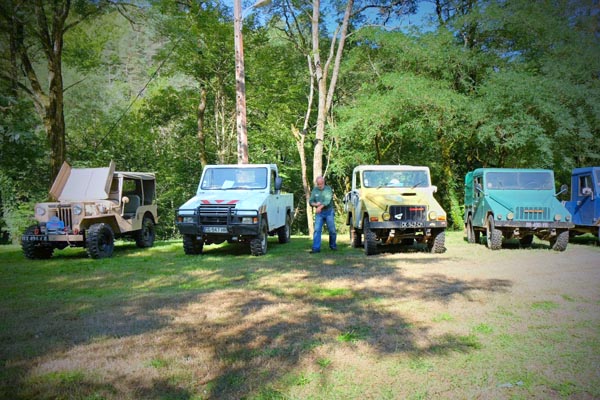 A group of Cournils from different eras is seen here at a 2016 gathering in the town of Pandrigne. Photo by Guillaume, whose restored early Cournil is on the left.


Thanks to Hubert Cossard, who found the 1987 photos by Jean-Luc Simon from Centre-France, and also did the drawings of the Cournil.

Elsewhere on the web there are sites devoted to the Cournil, including Cournil 4x4 and Philocournil in French and Cournil Tractor in English, all of whom provided information for this page. -- Derek Redmond

Return to Jeeps Around the World or to CJ-3Bs in History.